Added Weight: Defending Champs have a chip on their shoulder 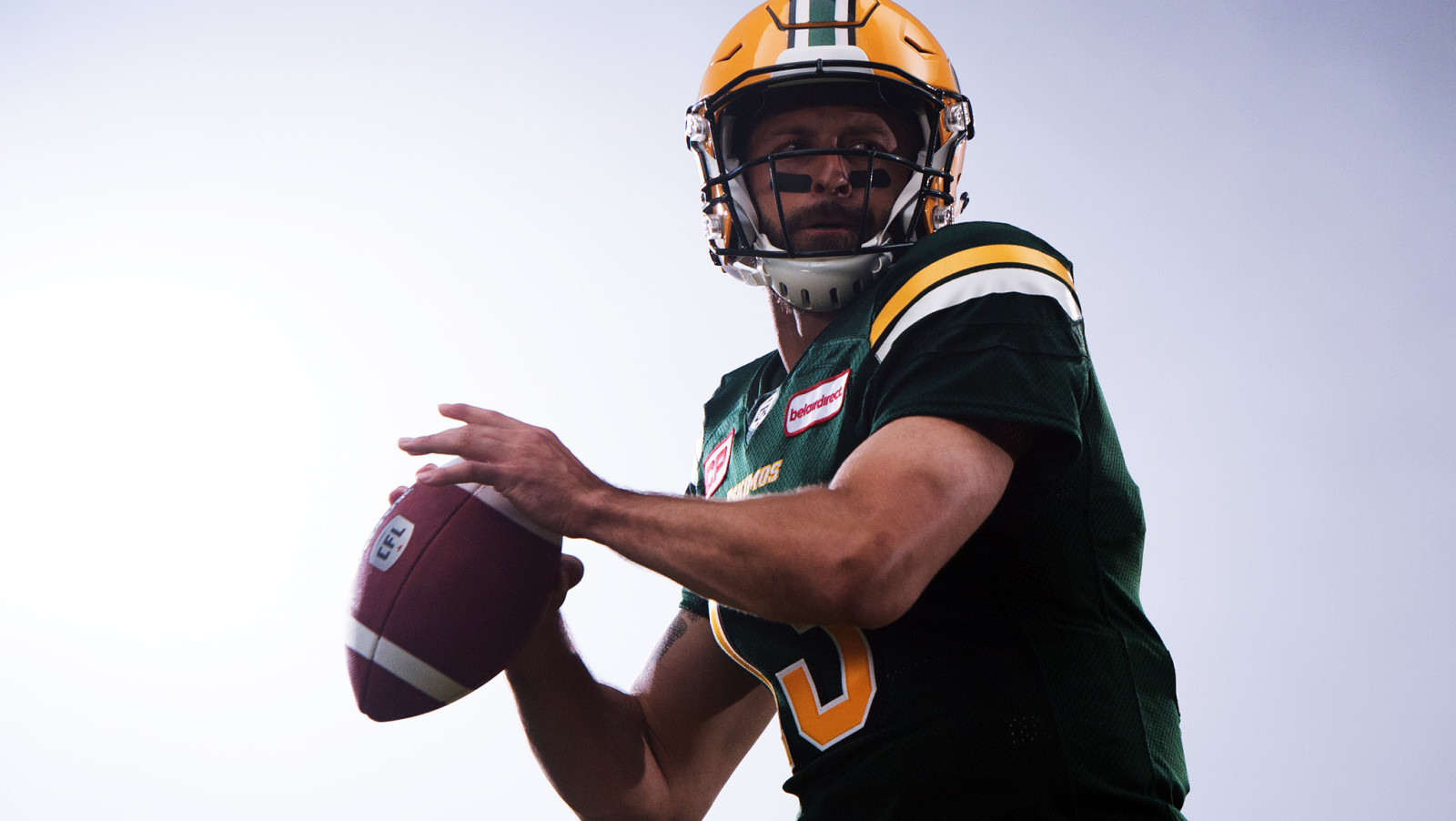 Added Weight: Defending Champs have a chip on their shoulder

EDMONTON — It’s not often the defending champs feel like they’ve got something to prove, but the 2016 Edmonton Eskimos can’t help but feel a little slighted.

After all, it wasn’t long after a 26-20 win over the Ottawa REDBLACKS in the 103rd Grey Cup Championship they had the rug pulled out from under them – the confetti barely cleaned up before learning that Chris Jones was heading to Saskatchewan to run the Riders.

Jones, not the Eskimos, became the big headline of the most recent CFL off-season, and when prognosticator Rod Pedersen predicted the Riders would finish first in the West and the Eskimos last, it hit a bit of a nerve.

“My response to that honestly didn’t have anything to do with Saskatchewan,” said Reilly, who responded on twitter. “If you’re telling me that we were the best team in the league and the Grey Cup Champions last year, and now this year we’re not even good enough to compete in our own division?

“To me you’re insinuating that the coaching staff was solely responsible for the Grey Cup and us as players had nothing to do with that. So that pissed me off, and I will always defend my teammates and myself.” 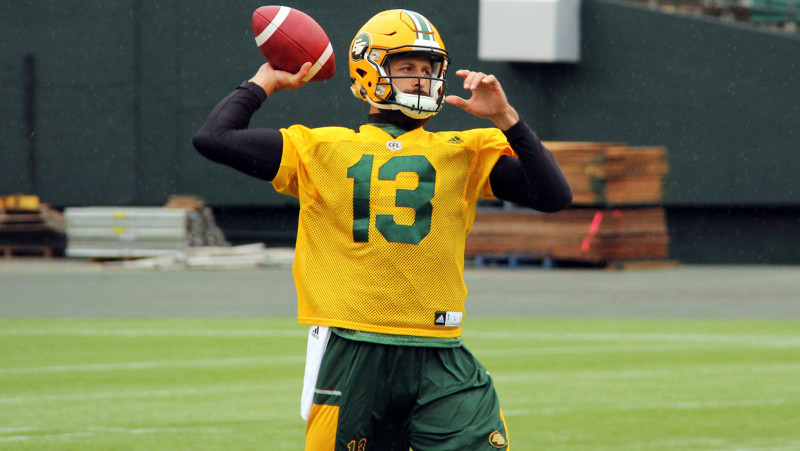 Mike Reilly is the number one player to watch in the CFL in 2016 (Esks.com)

It’s not that the Eskimos aren’t getting any respect. They are the betting favourites to win the Grey Cup this season while Reilly, the Grey Cup MVP last year, is considered the pre-season favourite to win Most Outstanding Player.

Still, most of the talk this season has been on the other teams in the West. Jones took almost his entire coaching staff with him to Saskatchewan along with Otha Foster and Shamawd Chambers, among others. The Bombers reinvented themselves with the additions of Weston Dressler, Ryan Smith and Andrew Harris. The Lions have Jonathon Jennings and the Stamps are the Stamps.

The Eskimos aren’t underselling the rest of the West – they know other teams have improved. But while a few changes have been made, including the departures of Coach Jones, Aaron Grymes, Otha Foster, Dexter McCoil, Willie Jefferson and now John Ojo (Achilles, lost for the season), one advantage the Eskimos have is the winning culture.

“I think everybody’s football team has changed,” said Reilly. “But success and winning is something you have because you believe in it and because you’ve done it.

“It’s really hard to go from 4-14 to 12-6,” he added. “It’s much more often you see like Calgary’s been for the last decade, where you’re winning consistently every year because you’ve built your foundation.”

And all that talk aside, the Eskimos believe that’s exactly what they now have themselves – a foundation in place that’ll allow them to compete for if not win multiple championships.

» Over/Under: Cauz looks at team by team win totals for 2016 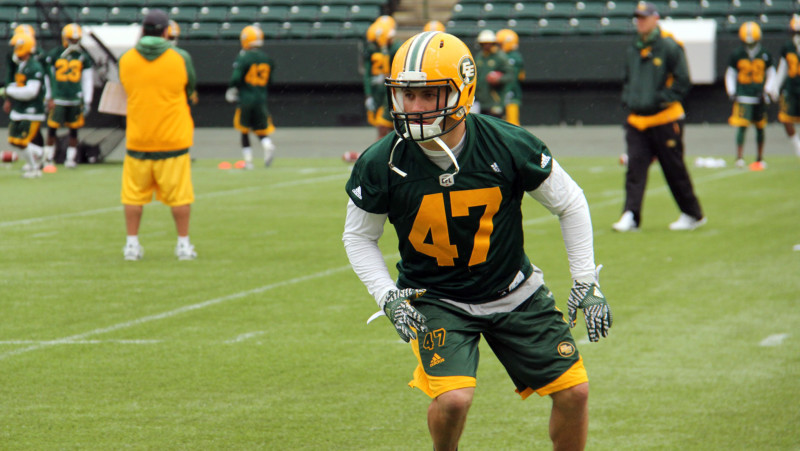 JC Sherritt is one of the key returning members of the Eskimos’ defence (Esks.com)

Yet despite Jones leaving, there’s little reason to believe that will change. The offence is in good hands with Jason Maas, the team’s new head coach after becoming one of the league’s fast-rising coaching stars with the Ottawa REDBLACKS. Maas coached the CFL’s number one offence in Ottawa, helping the REDBLACKS go from two wins in 2014 to 12 wins and a Grey Cup appearance a year later.

On defence, the Eskimos go from Jones to another top-notch defensive mind in Mike Benevides, the former head coach of the BC Lions.

Maas said he welcomes the pressure of coaching the defending Grey Cup Champions.

“I know what I’m getting into,” said Maas. “Having played here before I understand the expectations of Edmonton. There’s pressure every year in Edmonton to win; I know everyone’s goal is the same but it is true here – and I want to be a part of it.

“When you take over the defending Grey Cup Champions that means you have some quality people here. I look forward to that challenge and building on that culture that they’ve established here and continuing winning.”

There’s no doubt the Eskimos have some holes to fill, particularly on the defensive side of the ball where the secondary has been almost entirely depleted. Grymes left for the NFL, Cauchy Muamba was released, Foster went to Saskatchewan and Ojo is injured, leaving Watkins as a rare mainstay and youngsters Kenny Ladler and Deion Belue left to fill really big voids.

On offence, Kenny Stafford left as a free agent to Montreal and Chambers headed to Saskatchewan, while five of the team’s seven active receivers own a Canadian passport.

Yet when the Eskimos suit up for their Grey Cup rematch with the REDBLACKS over the weekend, their opponent will be missing nearly half of its starting defence from late last November, and Ottawa’s coaching staff also took a hit on the sidelines with the loss of Maas.

With all of the change this off-season, the Eskimos still have the Grey Cup MVP as their quarterback; last year’s second-leading receiver in Adarius Bowman; the Most Outstanding Rookie in Derel Walker; the upstart running back John White; and a veteran core on defence made up of Watkins, Deon Lacey, JC Sherritt, Odell Willis and Almondo Sewell, among others.

If anyone wants to underestimate the defending Grey Cup Champions, Sherritt is quite alright with it – if only because he knows others on the team won’t be.

“I’m kind of happy,” said Sherritt, “because I’m going into my sixth year – I’m not going to let a prediction affect anything I have. But for some of those young guys, that’s great for them to hear because that just picks them up a little bit more.

“For some of those young guys, that’s great for them to hear because that just picks them up a little bit more.”
JC Sherritt

It’s nothing the veteran linebacker reads into now, but he can’t say he would’ve felt the same five years ago.

“It would have pissed me off,” said Sherritt. “Definitely. And I hope it does, I hope it pisses all those young guys off. I’ve seen quite a few predictions get flip-flopped. I think my first year we were picked to finish dead last and just lost out to Lulay in the Western Final at the end of the year.”

One thing’s certain: the Eskimos aren’t buying into any of it.

“Can’t, you can’t,” said Bowman. “I’ve heard it a couple of times. I heard. I’m around it. I’m there with it every day. I guess the biggest thing is we’ve gotta wait.”

Added Reilly: “I still think we’re the best team in the league, but I don’t think anyone cares what we think until we go out and do it.”

The waiting ends Saturday, June 25 when the Eskimos take the field for their home-opener in a Grey Cup rematch against Ottawa.