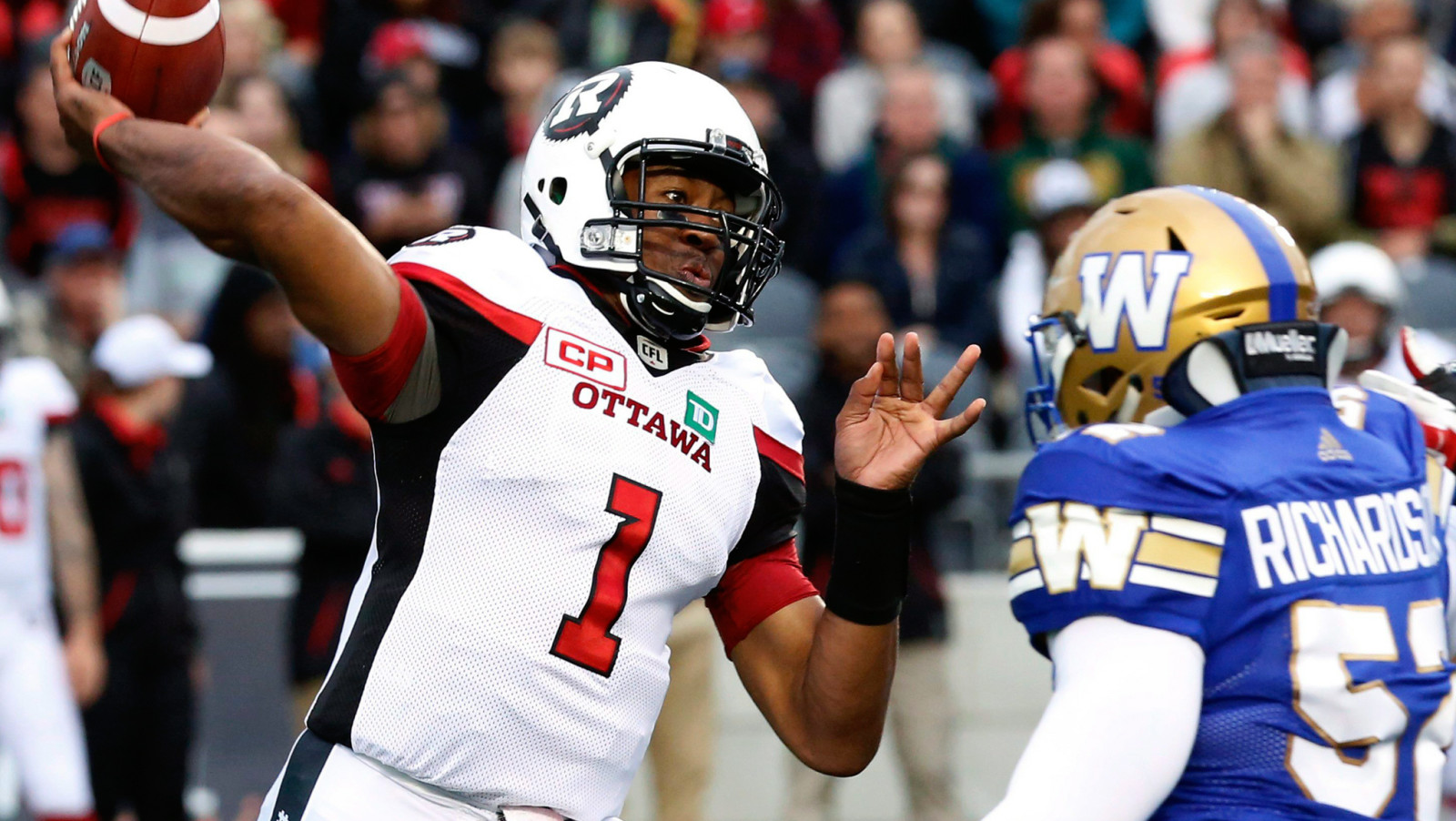 The REDBLACKS go from hunter to hunted. The Ticats await the return of their franchise man. The Argos have theirs back to full health. The Alouettes hope a veteran can fire up the offence. It’s the CFL East in 2016. 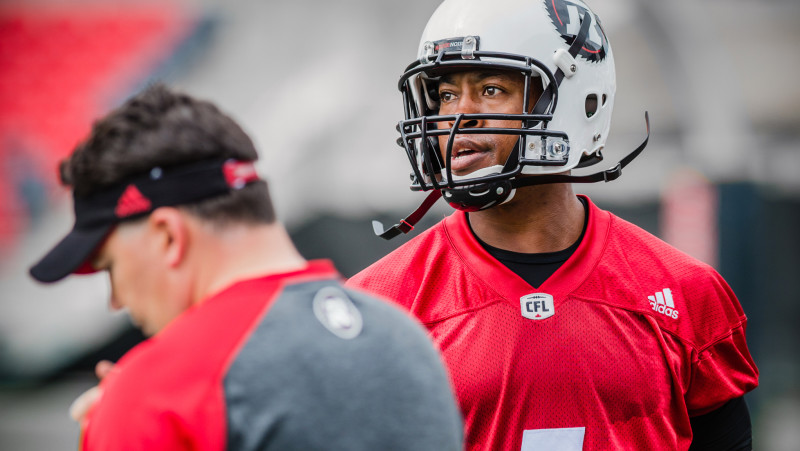 Henry Burris will look to follow up a career season with another big year (OttawaREDBLACKS.com)

Like most every other team in the league, the East Division Champions lost some key players in the off-season, particularly on the defensive line and that’s important to note. The strength of the Ottawa defence in 2015 had its epicentre in that line and a rotation of terrific athletes, cemented when Shawn Lemon joined the team for the second half of the season. However, Lemon left for Saskatchewan during the free agency period and another key motor on that line – Justin Capicciotti – did the same. Interior lineman Keith Shologan signed with Winnipeg. That’s a big hit to a unit that made it all go for the REDBLACKS’ defence in 2015.

A re-worked defensive line will hope to find the range as quickly as possible. Ottawa will look to fourth-year defensive end Arnaud Gascon-Nadon – signed away from Hamilton as a free agent – to step in and step up. If veteran defensive end Aston Whiteside, who missed both pre-season games and hasn’t played since injuring a knee last August, is back to his old self soon (he may even play in the opener against Edmonton) that will be a huge boost. Zack Evans in a holdover and a very good one, so the REDBLACKS have him to use as a key.

Elsewhere on that defence there are stars aplenty with the likes of Antoine Pruneau, Damaso Munoz, Jerrell Gavins, Forrest Hightower and 2015 CFL All-Star Abdul Kanneh.

The offence only got better this off-season. Yes, last year’s offensive coordinator Jason Maas is now head coach of the Edmonton Eskimos, but he left behind the league’s Most Outstanding Player, quarterback Henry Burris, with a complete command and understanding of the type of offence Ottawa will run again this season. If he falters (seems an annual rite of passage to question whether Burris can still get the job done for some unknown reason) the REDBLACKS have Trevor Harris ready to trot out and we all know what he accomplished in a breakthrough season with Toronto in 2015.

With a stable of terrific receivers and two all-stars on the offensive line (SirVincent Rogers and John Gott), the offence looks good to go (insert “but” here). But running back William Powell, who became a star in the backfield late last season, injured an Achilles in training camp and is gone for the year. His replacement, Travon Van, dressed for three games last year and ran the ball a total of zero times. If he struggles, look for a vet to be brought in, pronto.

Question: Can the REDBLACKS get their return game going in 2016? It was a big disappointment in 2015.

Outlook: Outside of the D-Line, there is mostly stability. The REDBLACKS earned the East Division title in 2015 and they have the tools available to hang on to the belt. 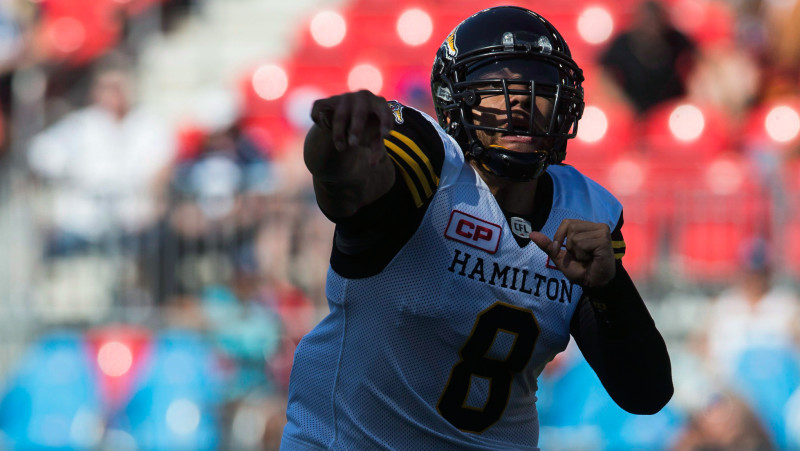 With quarterback Zach Collaros freshly signed to a contract extension through 2018, the Ticats have their general in place. Or, they will when Collaros returns from the knee injury he suffered last season. He’s still a few weeks away but when he comes back and if he feels no ill effects from that AC ligament tear, the Ticats will be humming on offence. It’s up to back-up Jeremiah Masoli to lead the charge in the interim.

Good news for the Ticats is that after a lacklustre first half performance in last year’s Eastern Semi-Final, Masoli rallied in the second and then had a terrific Eastern Final despite losing to Ottawa. So he’s shown ability. The receiving corps is stacked with veterans like Andy Fantuz, Luke Tasker, Tiquan Underwood, Brandon Banks and big Terrence Toliver. And, oh yeah, free agent signing Chad Owens, who’s not a fan of being told that he can’t do it anymore. He’ll play with something to prove.

» RELATED: Collaros relishing the chance to represent something special

Defensive Coordinator Orlondo Steinauer has some adjusting to do in 2016, personnel-wise, as the ‘Cats lost a number of big names in free agency, including linebackers Tank Reed (Calgary) and Erik Harris (NFL), a number of familiar names from the defensive line (see Argos, below) and defensive backs Brandon Stewart (BC) and Ed Gainey (Saskatchewan).

The ‘Cats got their most dominant and most important defensive players, lineman Ted Laurent and linebacker Simoni Lawrence, both all-stars in 2015, back under contract and kept defensive backs Courtney Stephen and Emmanuel Davis in black and gold, too. Steinauer’s got plenty to work with, including free agent signings in defensive end John Chick as well as defensive backs Dominique Ellis and Geoff Tisdale. No reason to believe that this defence won’t once again be a big time force as the season plays out.

Question: Can the ‘Cats keep C.J. Gable healthy? When he’s a hundred per cent, he is the best dual threat running back in the CFL, for my money.

Outlook: Do not underestimate these ‘Cats without Collaros. Fear them when he returns. 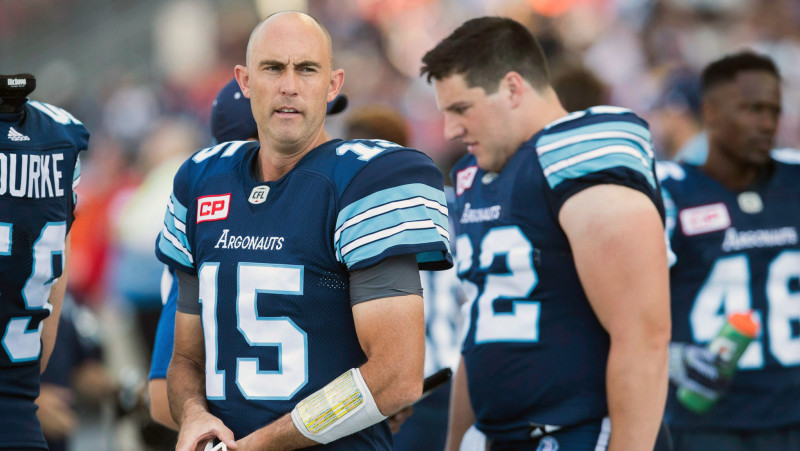 Why did the Toronto Argonauts spend so much money on free agent offensive tackle Josh Bourke this past off-season? Because job number one is keeping quarterback Ricky Ray safe from physical harm all season long. Now that the veteran pivot’s throwing shoulder is back to one hundred per cent health, the Argos need to keep it that way and Bourke has been as good a blind side protector as any over the last decade.

The Argos are stacked on offence with a strong line and they are rich in big, speedy receivers as well as Canadian talent. Receivers Kevin Elliott, Tori Gurley and Vidal Hazelton are no longer rookies and when they get in gear with Ray, have the potential to really terrorize opposing defences. Andre Durie, Anthony Coombs and Diontae Spencer can roll up the YAC and veteran running back Brandon Whitaker is still as good as they come when it comes to picking up blitzers and that is very, very important to this team.

Can the Argos upset the Ticats?

The Argos’ defence was far less than dominating in 2015 and the expectation there is that bringing in Rich Stubler to coordinate things will have them closer to the performance levels of the last great Argos’ defence – the one designed by Chris Jones in 2012. I don’t have to tell you that Stubler is a mastermind, do I?

There should be improvement but, like the REDBLACKS and Ticats, the Argos have to deal with a rebuilt defensive line, losing Tristan Okpalaugo and Cleyon Laing to NFL deals and Euclid Cummings to Winnipeg. Stalwart Ricky Foley remains along with Daryl Waud – who had an impressive rookie campaign in 2015 – and veterans Bryan Hall, Brian Bulcke and Justin Hickman were all signed through free agency. The addition of another stellar vet, strong side linebacker Keon Raymond, has the Argos optimistic about a defensive rise. Veteran safety Jermaine Gabriel anchors the secondary with corners A.J. Jefferson and Akwasi Owusu-Ansah both heading into sophomore seasons.

Outlook: Tons of potential here. Might need a little time to gel but when they do…. 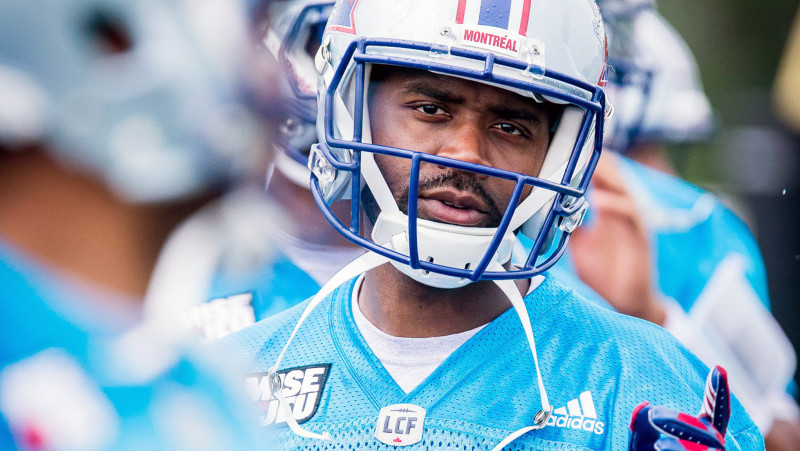 Kevin Glenn looks to be the glue that holds the Alouettes together this season (MontrealAlouettes.com)

Well, lookie here. Finally found the East Division team without massive change on its defensive line — outside of signing monstrous tackle Vaughn Martin, that is. The Als come into 2016 with a fairly intact – and formidable – D line. With the ageless John Bowman, Aaron Lavarias, Alan-Michael Cash, Michael Klassen and Gabriel Knapton all returning and a linebacking corps that boasts 2015 all-star Winston Venable, Bear Woods, Chip Cox, Kyries Hebert, Nicolas Boulay, as well as emerging Canadians Chris Ackie and Nick Shortill, you’ve got as good a front seven as there is.

The winds of change blew through that secondary, though, with Dominique Ellis and Mitchell White being released. Rookies Ethan Davis and Greg Henderson are expected to start and the Als may be vulnerable there at the outset of the season.

Quarterback Kevin Glenn has tons to work with on offence. The remarkable S.J. Green and the timeless Nik Lewis are there and burners Kenny Stafford and Duron Carter have returned for second stints as Alouettes, with Sam Giguere in the fleet as well.

All Glenn has ever needed was decent tools with which to work and that you don’t ask him to win games all by himself. Whenever he’s been supported by a good running game, Glenn has been a competent conductor, sometimes a maestro. He’s got 2015 all-star Tyrell Sutton in the backfield, so it’s all systems go in that regard.

Question: Is second-year left tackle Jacob Ruby ready to take over from the departed Josh Bourke?

Outlook: The Alouettes will surely make you battle for points. They’re better than you think.