‘The moon is the limit’ for upstart Argos 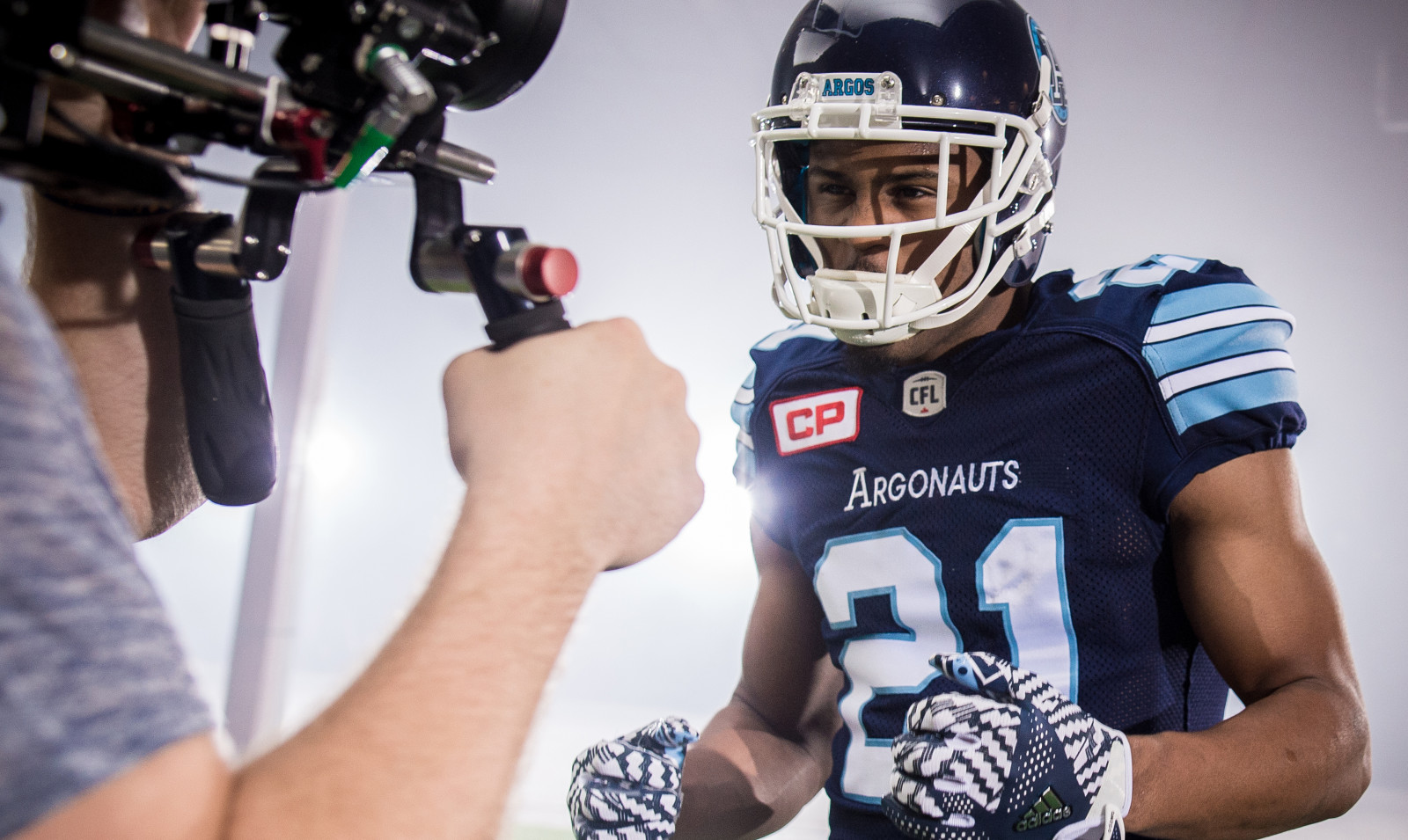 ‘The moon is the limit’ for upstart Argos

Vidal Hazelton (21) of the Toronto Argonauts during the CFL / TSN shoot in Mississauga, ON. Tuesday, April 19, 2016. (Photo: Johany Jutras)

That’s certainly what the Argos are hoping for when they run onto BMO Field for the first time on Thursday night. For all the hype surrounding the new-look Toronto Argonauts, the big hope for the Boatmen is their quarterback returns to his form of old.

One of the most accurate passers in CFL history, the Argos’ hopes and dreams this season rest on the surgically repaired right shoulder of the 36-year-old Ray — something everyone in Toronto seems quite comfortable with.

“He’s very calm. He’s not a rah rah guy,” said Argos second-year receiver Tori Gurley. “You can tell he’s been here before. Just having that confidence, that cool and collective swag – it rubs off on you.

“He’s going to make his reads and he’s going to deliver the ball. He throws the prettiest ball I’ve ever seen.”

Yes, count Gurley among those happy Ray is back in the huddle this season. The 28-year-old Birmingham, Ala. native never played with the future Hall of Fame quarterback until late last season but didn’t take long to appreciate the veteran pivot’s abilities as a passer.

“I’ve watched him on film and I’ve also heard the stories and the myth,” said Gurley. “It was just amazing to actually get out there and compete with him, especially when he was cleared to practise full speed.

“He was able to make some reads that really are going to help us this year and get us to the next level.”

Confident, zealous — whatever, the Argos are a group that believes in itself this season, and for good reason.

At this time last year, Gurley was one in a crowd of new faces on the team, just making the opening day roster despite arriving in camp a couple of weeks late. Ray was on the shelf recovering from his shoulder surgery and quarterback Trevor Harris had one start under his belt. And while Casey Creehan was getting his feet wet with a young, inexperienced defence, the Argos were asked to play several home games in neutral or hostile environments.

Fast forward to a year later and so much has changed. The foursome of Gurley, Vidal Hazelton, Kevin Elliott and Diontae Spencer has emerged as a dynamic young receiving corps, led by Gurley’s league-leading 10 touchdowns last season.

One of the league’s best defensive coordinators is back in Toronto as Rich Stubler returns to Toronto to coach an influx of new talent on that side of the ball, including veterans Keon Raymond, Bryan Hall, Brian Bulcke and Justin Hickman.

And bigger than anything, the Argos will have a boisterous home crowd at their back, no scheduling conflicts and a beautiful newly-renovated facility to play in every single home date.

While all eyes are on the REDBLACKS and Ticats following their dominant seasons a year ago, all signs point to a much improved Argos team — one playing with the extra added motivation of hosting the 104th Grey Cup Championship at the end of November.

“There’s no place like home,” said Gurley. “That slogan is used a lot of but makes a world of difference when you’re trying to have a competitive advantage.

“Being able to sleep in your bed the night before the game and drive your car to the stadium and just really mentally plan a game in your mind before kickoff – it makes a difference just being comfortable.”

The Argos were not afforded most of those luxuries last season but still held their own in the rapidly-emerging East Division, clawing out 10 wins and getting back in the playoffs for the third time in four seasons under Scott Milanovich. Still, there’s something to be said for having a true home advantage.

“Being able to play in front of a home crowd and not having to worry about if the Blue Jays win this game . . . with the new ownership and knowing we have a home locker-room that’s ours and we’re not sharing it with anybody — it’s one of those things you don’t want to worry about,” said Brandon Whitaker. “You just want to be able to go out there and play football.”

With the force of the home crowd and a Stubler-coached defence, the Argos hope to improve on what was the league’s sixth-ranked defence in 2015 that allowed 348.6 yards per game, including 282.8 yards per game through the air (second-worst in the CFL).

Both Ray and Whitaker have played against enough of Stubler’s defences in their careers to know just what that unit will bring to the table.

“Nice to have him on our side,” said Ray. “The thing that made them difficult was everything looked the same back there. They never really gave you any pre-snap checks or anything like that and they could play multiple coverages off the same looks.

“It made it hard for you as a quarterback to recognize what they’re doing and they just kept you off balance.”

But while Stubler brings over the same defence that helped the Stampeders win the Grey Cup in 2014 and a total of 29 wins over the last two seasons, the focus in the Ontario capital will be and always has been the offence. After ranking in the top four offensively in Milanovich’s first four seasons as coach, the Argo offence dropped to sixth in 2015.

Last year was a rebuilding year for that unit, but in the end more is expected from a group led by Milanovich, the same coach who’s helped produce other successful offensive coaches across the CFL like Jason Maas and Stephen McAdoo.

It wasn’t all bad as Harris filled in for Ray admirably and led the CFL in touchdown passes, while the Argos’ towering young rookie receivers learned not just the nuances of the Canadian game but also how to be professionals. Yet in the end, something was missing.

The Argos believe Ray, who spent his first full healthy-off-season in years working with renowned throwing coach Tom House, brings something else — something the younger receivers have heard from the myths and something Whitaker used to see on a daily basis from the league’s all-time leading passer in Anthony Calvillo.

“It’s huge, man. It’s Ricky Ray,” said Whitaker, drawing comparisons between the two all-time greats. “Just the way they carry themselves. They’re the pro’s pro. First one in the building, last one to leave.

“You want to do your best when you’re out there with him,” he continued. “You want to run the route the best way; you want to block for him. That’s something you had with Anthony, too. You don’t want to let him down.”

The Argos don’t want to let Ray down, nor do they want to let their fans down. In their first year in the new stadium and with the Grey Cup coming to down, much is riding on what happens for the Argos in 2016. The Argos want to build a new vibe in Toronto around the team, and it starts with the fans. That means playing not just exciting football but winning football.

Knowing what they’ve got to work with, Gurley and the Argos expect nothing less than a championship.

“I was so upset that we weren’t in the Grey Cup that I didn’t watch it,” Gurley said. “Coach Scott was one of the first guys I called and I said ‘I’m going to give you everything I’ve got this year because I want to be part of that greatness. I want to drink out of that cup’.