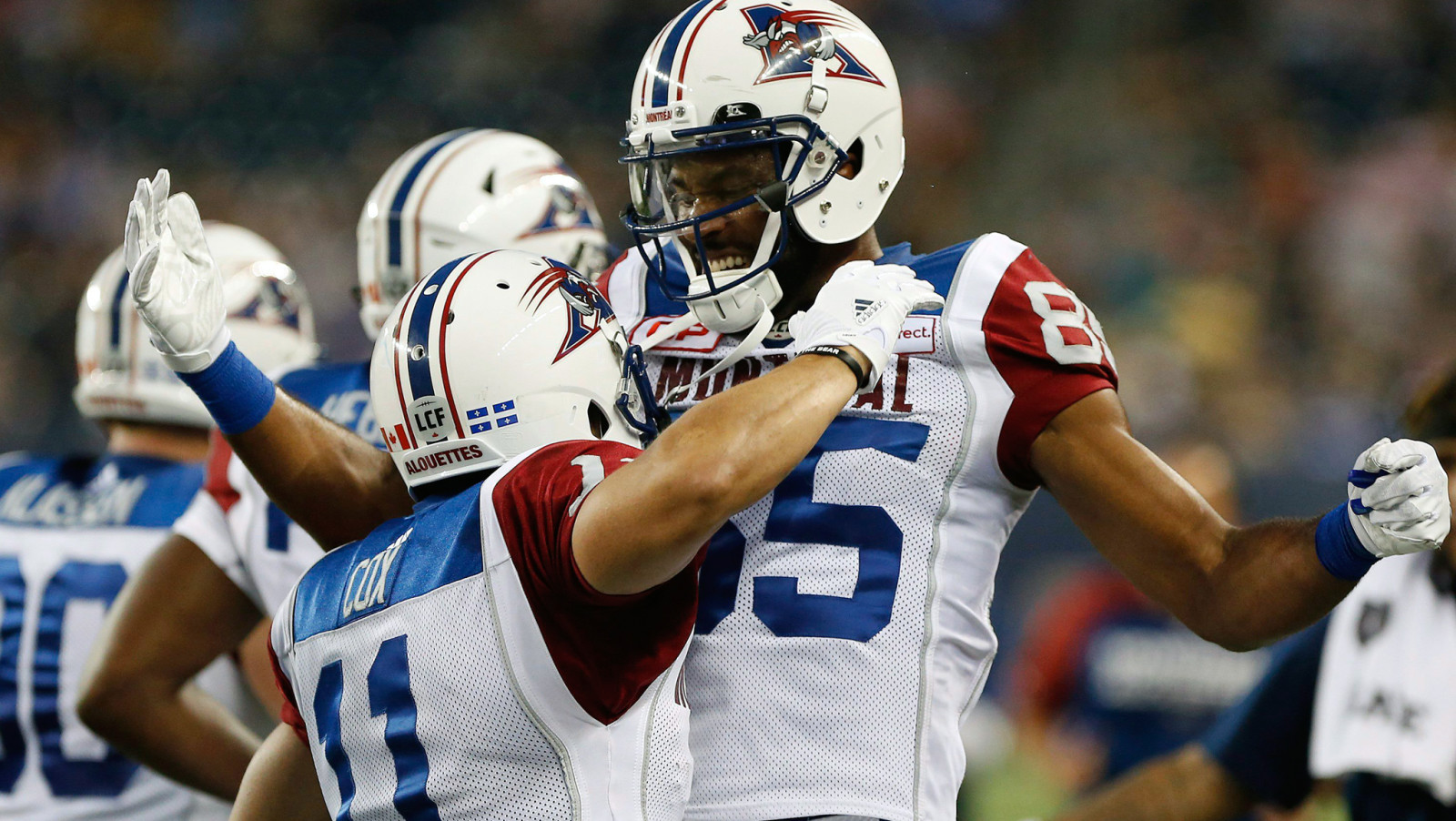 WINNIPEG — Duron Carter picked up exactly where he left off while Kevin Glenn couldn’t be stopped, as the Alouette offence took flight in a 22-14 win over the Bombers on Friday night.

It was a date Bombers fans had circled on the calendar all off-season as many new faces made their debut in Winnipeg royal blue, but in the end it was the Alouettes making the statement with the season-opening win.

Glenn threw for 332 yards and a touchdown on 30-of-42 passing in his first opening-day start as an Alouette, while Carter caught a game-high eight passes for 96 yards as the Als’ offence combined for over 400 yards in a winning effort.

Andrew Harris was effective in his long-awaited Bomber debut, rushing for 80 yards on 13 carries (a 6.2-yard average) and chipping in six catches for 40 yards. Ryan Smith was quiet along with the rest of the Bombers’ passing attack, recording three catches for 28 yards.

While the Bomber offence struggled to get in sync out of the gate, an hour-long delay due to lightning in the area put a damper on Investors Group Field early. A 41-yard field goal by Boris Bede and a safety conceded by the Bombers gave the Als a 5-0 lead through 15 minutes, while the Als’ defence continued to set the pace by holding Willy at bay.

The Alouettes continued to carry the play as Glenn was comfortable and efficient against the Bombers’ Richie Hall defence, but a dominant first half by Chris Randle that included an interception and a fumble recovery, both in the shadow of his own goal-post, kept the Alouettes out of the end zone through most of the first 30 minutes.

Still, Willy and his new acquisitions minus Dressler failed to take advantage. Glenn completed six straight passes, including a highlight-reel tip-toe catch by Carter along the sideline, setting up a one-yard touchdown run by Brandon Bridge on second down to put the Als ahead 12-0.

Bad turned to worse for the Bombers when Chip Cox intercepted Willy’s pass on the very next offensive play, taking it deep into Winnipeg territory on the 30-yard return. But it wasn’t long after that Randle picked up his second turnover of the game when Sutton fumbled just in front of the Bombers’ goal line.

Medlock missed his first field goal try as a Bomber soon after, hitting the upright from 47 yards out with half a minute left in the second quarter — but down 12-0 the Bombers could go into the room at halftime knowing they dodged a bullet and were still very much in the football game.

Not lost among the big-name acquisitions by the Bombers, it was the strong-legged Medlock, also the most accurate kicker in CFL history, that gave Winnipeg some much-needed momentum early in the third quarter. Medlock drilled a 58-yard field goal right down the middle of the uprights, tying the longest field goal in Bomber history and cutting Winnipeg’s deficit to 12-3.

But any bit of momentum the Bombers mustered was quickly washed away. On the very next possession, Glenn and his hot hand found Carter over the top on the deep ball to give the Alouettes the ball inside the five. Glenn went right to S.J. Green along the left sideline in the end zone, and the veteran duo connected for six to extend Montreal’s lead to 19-3. 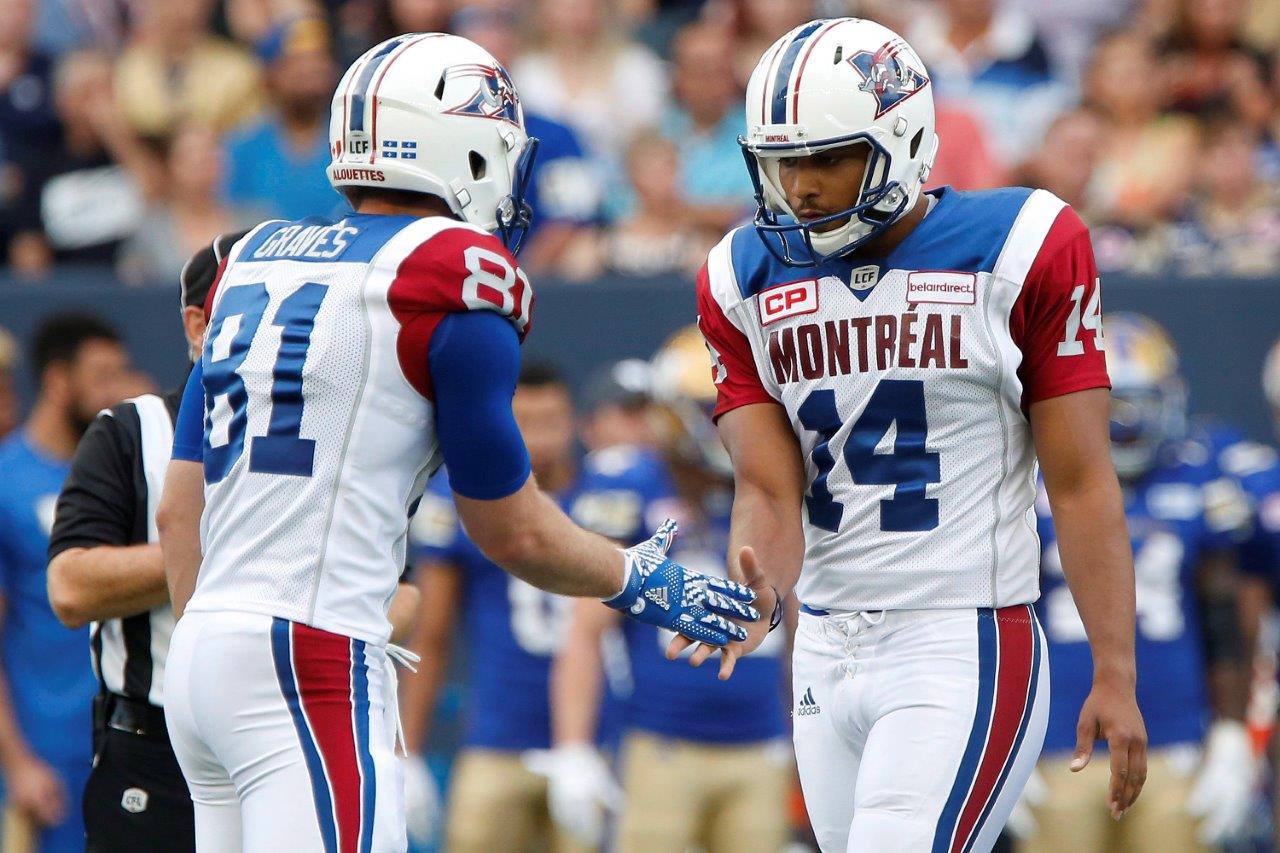 The Alouettes added a field goal to extend the lead to 19, while the Bombers showed signs of life midway through the fourth when Willy moved them inside the red zone. But on a third-down gamble, Willy was stuffed on a great individual effort by Bear Woods, turning over the football and putting it back in Montreal’s hands.

The Als conceded a safety to make it a 16-point game, but the Bombers were again stuffed on third down on another sack by Montreal’s defensive front, this one from Jesse Joseph.

Winnipeg made it a little bit interesting late in the fourth when a highlight-reel 63-yard grab by Darvin Adams set up a Willy to Adams connection for the Bombers’ first touchdown of the game. The Bombers converted the two-point conversion to make it an eight-point game.

Just when it seemed like the Als had the clock wound down, the Bombers made a stop and Bede pushed a rare miss to give the Bombers life. Willy took the field near his own goal line with 55 seconds left, but needing the whole field and eight more points, time ran out on the Bombers.

Last year’s sack-leader in John Bowman got off to a strong start in his 2016 campaign recording a pair of sacks while adding a team-high seven defensive tackles. But at the end of the day it was Anthony Calvillo and Jacques Chapdelaine’s offence that soared for the Alouettes as six different receivers caught three or more passes.

Ian Wild led the game with eight tackles for the Bombers while Randle finished his day with six tackles, an interception and a fumble recovery. Bede hit two of three field goals in the win while Medlock finished his first game as a Bomber with one successful kick on two tries.

After a slow start, Willy finished the game with 303 passing yards, a touchdown and an interception on 25-of-34 passing.

The Als will look to capitalize on their early momentum in their home opener on June 30 in a pivotal matchup with the Ottawa REDBLACKS.

For the Bombers it’ll be back to the drawing board after a frustrating home-opener. They’ll travel to Calgary in Week 2 for a Canada Day matchup with Bo Levi Mitchell and the Stampeders.