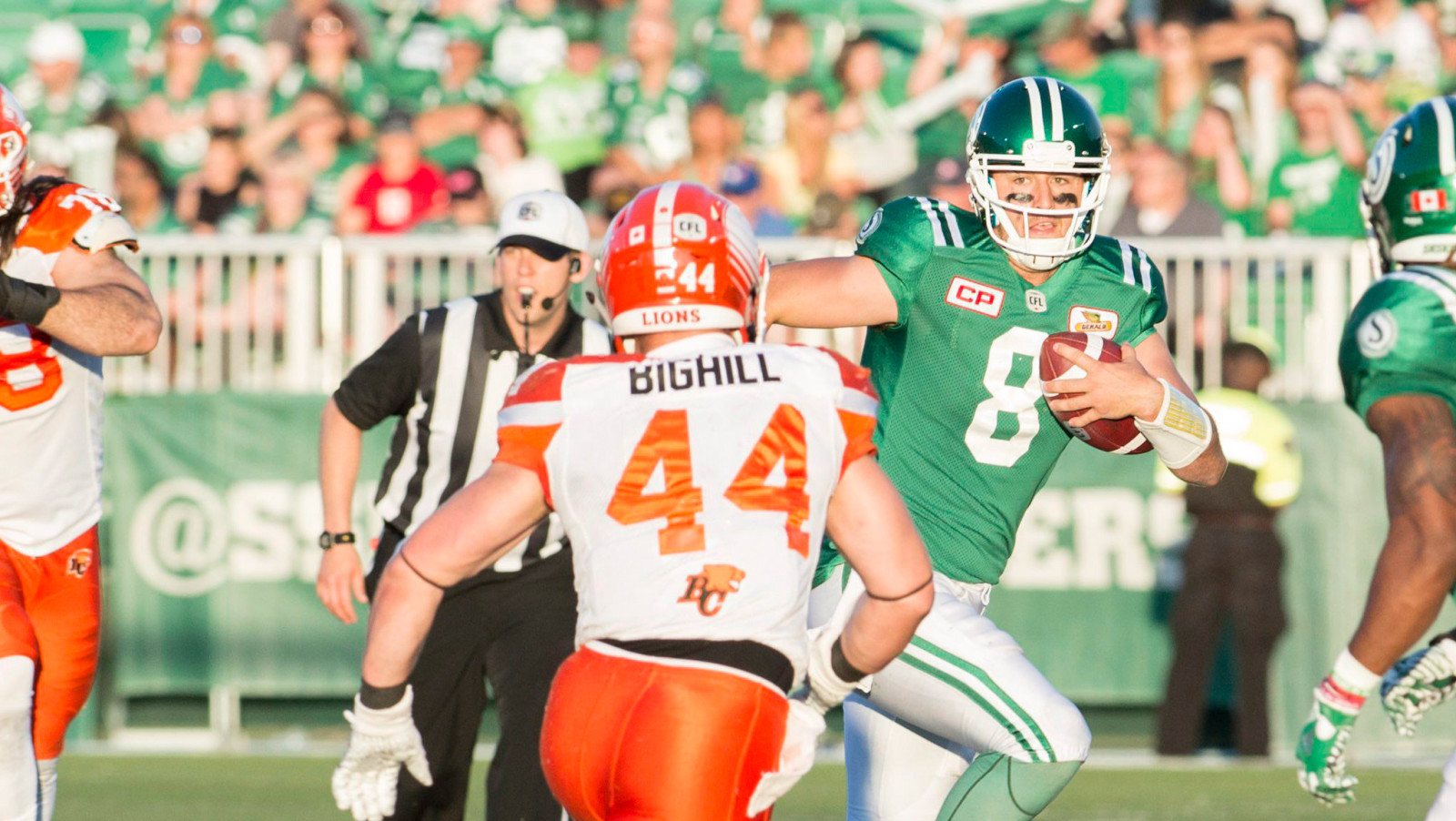 The 26-year old quarterback from Alva, Oklahoma – who wears #8 for the Saskatchewan Roughriders – will be the latest starting quarterback for the Green & White.  Gale has been given the nod due to an ankle injury to Darian Durant which has caused the star pivot to miss Friday’s home game against the Ottawa REDBLACKS .

Gale isn’t entirely new to Riderville, however he’s only been here for a few weeks.  The Abilene Christian product was acquired from the Toronto Argonauts on July 2 in the Shawn Lemon deal.

And the Rider Nation got to see a fair amount of Gale in the team’s 40-27 home loss to B.C. in Week 4.  Gale came in to replace the ailing Durant in the second quarter and tossed for 247 yards and a touchdown.  However with Gale behind centre, the club was unable to hang onto a 23-10 halftime lead and wound up suffering its third-straight loss to open the season.

The four-veteran quarterback will make his first career start Friday night, and it just so happens to come against the CFL’s #1 team, the 3-0-1 REDBLACKS.

“I feel prepared,” Gale calmly said on Thursday.  “We still got time before kickoff.  Every second before then’s going to be preparing in some way a little more than we have up to this point.  We feel good with the practice we’ve had and we’re getting all the kinks worked out of the game plan so that Friday night we’re gonna be efficient and successful.”

Earlier this week when it appeared Durant would be forced to miss this game, Gale admitted that he’ll likely feel some anxiety leading up to the biggest game of his career.  However so far the nerves have yet to set in.

“No, not right now,” Mitchell smiled.  “I think it’s something that as the game comes closer, there’s going to be a lot of excitement.  Any time that you’ve put a lot of work in as we have this week, and you have an event coming up like this game, it’s a big game for us and for them, there’s going to be some excitement and anxiety that comes along with it.  That’s just natural.  But what you try to do is lean on your preparation and that takes away any doubts or fears and the things that could distract you from the game.”

Whether Gale has had a sudden attack of the “butterflies” or not, it hasn’t shown to his teammates nor his coach.

No doubt, it helped Gale to get some valuable game action with his new teammates against the Lions last week even if the result wasn’t what they wanted.  And virtually since the day he arrived in town, Gale has fluently run the second team offense in practice causing the club to bump back-up quarterback B.J. Coleman to the 6-game Injured List.

PEDERSEN SAYS NO PANIC YET IN RIDERVILLE

Rod Pedersen joined James Cybulski and Davis Sanchez on this week’s installment of ‘The Waggle’ podcast and says it is too early to judge the Riders after just three games.  Listen below.

“Again, we can only judge off what we see (in practice),” Jones continued.  “The game will determine exactly how well we view Mitchell Gale from the outside.  Inside, we know that Mitchell Gale’s a solid person.  He’s prepared all his life for this opportunity.”

Indeed he has.  And the fact that Durant is missing this game shouldn’t overshadow the great story that is Mitchell Gale’s.  He was out of football this spring but paid his own way to several CFL free agent camps with the hope of latching on with somebody.  It was the Argos who eventually extended an opportunity, but it’s with Saskatchewan that he’s realizing his dream.

This whopping chance has made the out-of-pocket expenses this spring all worth it.

“It has,” Gale admitted.  “It’s been an interesting ride the last year.  It’s cool.  Up to this point it’s been cool.  Now we just have to go make things happen Friday night.”

One of those free agent camps Gale attended was with the Saskatchewan Roughriders in the winter months, and the 6’2″, 240 lb quarterback tried to make the most of his chance to open some eyes.

“Mitchell actually came to one of our off-season workouts.  I believe it was our Dallas one,” said Roughriders Assistant V.P. of Football Administration Jeremy O’Day on Thursday.  “We got to see him in person there and he did well.  We didn’t have a spot that we could assign him, but I think where he made some headway with us was his preseason play with Toronto.  What we try to do is study those preseason games and you can always find players on other teams that played well and might be available to you down the line.  He’s highly-recommended from the Toronto staff and he was under a good system there for a few years.  As football goes, you’re one play away from playing and now he’s up.  It’s his turn.”

Gale remembers exactly that weekend workout for the Roughriders in Texas this winter.

“It was Dallas,” Gale smiled.  “I remember there being 300 people out there and we were there for a long time.  And we had a long ride home to Oklahoma afterwards.  That’s what I remember.”

Of course if the Roughriders are going to knock off the high-flying REDBLACKS Friday night, it’s going to take more than a solid performance from a quarterback making his first career start.  Chris Jones has said all through training camp and the early stages of this season that the Riders are going to be a great football team.  But the Rider boss knows it’s time to show it on the field, and not be satisfied with just talking about it or pining for the better days ahead.

“I think they believe (they’re a good team) internally,” Jones said Thursday.  “But again, it’s 12 news guys on defense and there are a lot of rookies in the room so until you win a football game, you’re judged off whether you win or lose.”

Perhaps Friday night will indeed be Mitchell Gale’s time, and the Roughriders’ time too.