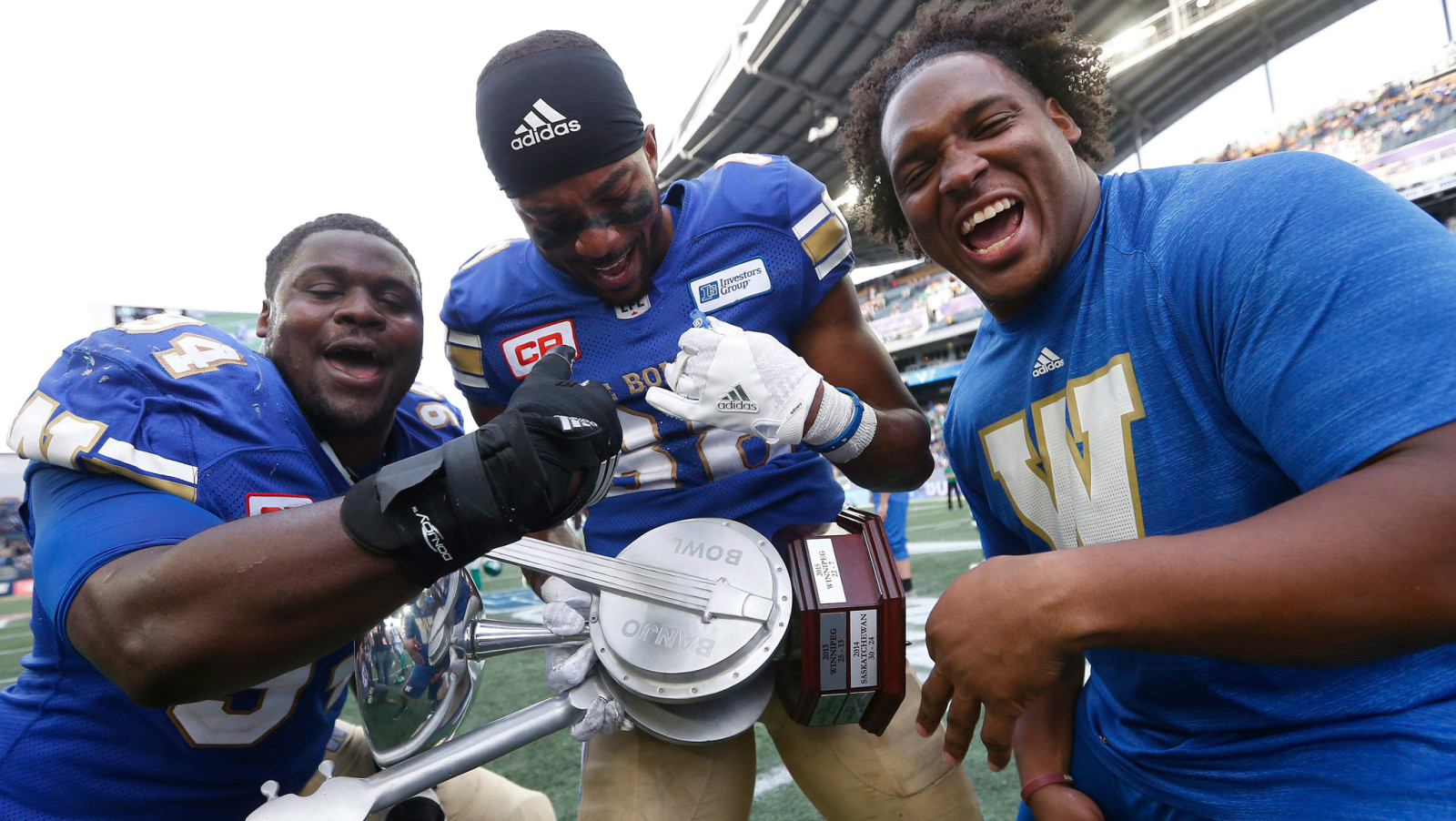 The Winnipeg Blue Bombers have been doing a lot of winning lately. A 17-10 win over Saskatchewan in this weekend’s Banjo Bowl extended Winnipeg’s winning streak to six games, but things aren’t just clicking on the field. The Bombers made a pair of moves on Sunday that fall very much in line with their recent winnings ways.

I love what Winnipeg did on Sunday night. By pulling the trigger on a pair of deals, the Bombers simultaneously got better in the short term while addressing their Canadian depth in the long term. It’s rare to be able to accomplish both of those feats in one deal, though. Winnipeg did just that with one of its deals and then sweetened the pot even more with the second.

MORE ON THE TRADES:
» Bombers ship Willy to Argos; acquire Glenn
» Argos eye the present and future in Willy
» Walters on QB trades: ‘This is a big deal’ 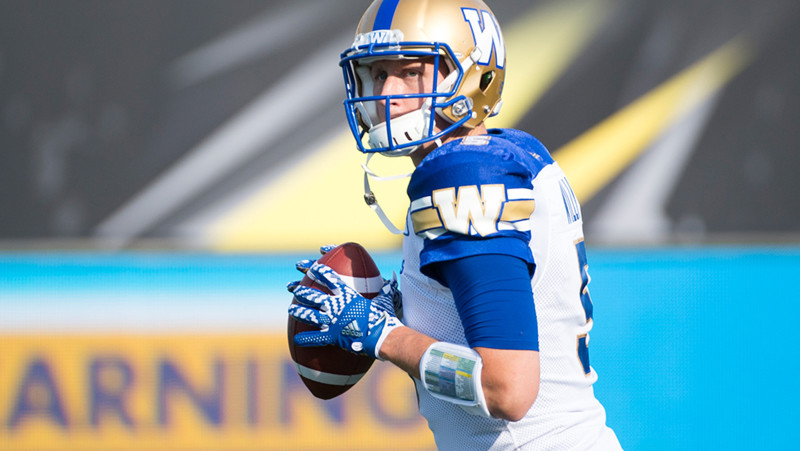 The Bombers have moved on from the Drew Willy era after trading him to Toronto (CFL.ca)

Winnipeg had the luxury of dealing from a position of strength, which allowed it to pounce when an opportunity presented itself. Because Matt Nichols has played so well since taking over from Willy, the Bombers had a surplus at quarterback. When Ricky Ray went down, Winnipeg had the leverage as it dangled Willy as a trade chip.

The Bombers weren’t going to go away from Matt Nichols. The team has won six straight since Nichols took over from Willy and the former is still young enough to be considered a decent long-term option. Nichols has outperformed Willy this season so tipping the scales his way isn’t a huge surprise.

Toronto still had plenty of reason to find Willy an attractive option, though. I think there’s still a ceiling to be reached and he’s going to get that opportunity with the Argos. Ray is out for the foreseeable future and what’s beyond that is anything but solidified. Willy, on the other hand, is 29 and has a chance to reclaim a number one job in this league.

Kyle Walters did a really great job here. Knowing he had numbers, and knowing Toronto did not, he was able to bring in quite the haul in return for Willy. The first and third round picks speak for themselves and I think they’re especially crucial acquisitions for Winnipeg. I’ve been very critical of Walters’s and the team’s inability to truly grow strong Canadian talent. High picks like these will go a long way in addressing that.

So it’s easy to see how the Bombers got better down the road, but what about right now? Well, that’s where Heath comes in, because he looks like he’ll fit right in with his new group. Heath leads the Argos with five interceptions this season, and joining the turnover machine that is the Winnipeg D seems like a solid match.

And then there’s the Glenn addition, which can’t be glossed over here. Depth at quarterback is paramount in this league and Walters knows that as well as anyone. Glenn is the perfect guy to back up Nichols for the rest of the season. He’s a veteran, he’s a great teammate and he can still get the job done if has to. Trading Willy couldn’t have been easy for Walters, even with the return he fetched; adding Glenn to the fold probably made it a little easier, though.

In the end, Winnipeg netted two valuable Canadian Draft picks, a DB having a really strong season and a proven, veteran backup to Nichols. In return, the Bombers had to make the tough decision of dealing Willy and had to send a fourth round pick to Montreal. With a haul like that, maybe moving out Willy wasn’t as difficult after all.

Best of the rest?

The Calgary Stampeders have carved out their spot at the to of the CFL mountain right now. After their 38-24 win over the Eskimos on Saturday, the Stamps have not only solidified their standing, they’ve now underlined it too.

So we know Calgary is the team to beat, but who actually has the best shot of doing that?

That question was rattling around my head over much of this weekend. Knowing the Stamps are the benchmark, I wanted to identify what team posed the greatest challenge to them in a playoff matchup. I know the regular season is far from over, but as it stands right now, I think that team is the BC Lions.

I really only gave a few teams any real serious consideration when thinking about it. Along with the Lions, I also included Winnipeg, Ottawa, and Hamilton. The two East Division teams here have been too inconsistent, though, to give either one the nod.

Winnipeg, on the other hand, co-owns the claim of “hottest team in the CFL” with the Stamps. The Bombers have won six straight games and will look to make that seven this weekend against Toronto. I love what the Bombers have done, but BC has been doing it longer and that’s why I give the Lions the slight edge.

In this week’s Berg vs. Ferg piece, the two of us submitted our biggest surprises of the season thus far. The latter gentleman pointed to BC and it’s tough to argue the surprising nature of this season for the Lions. With a new old head coach and a relatively quiet free agency, many didn’t know what to think of the Lions coming into the season. It turns out we should have been buzzing about this group a whole lot more.

The Lions pose Calgary’s biggest threat because they have a defensive group that can hang in there. Near the top of a good chunk of defensive categories, the Lions lead the CFL with 36 sacks and seem to be getting stronger as the season goes along. Slowing down the Stamps and their relentless attack is anything but easy, but BC’s defensive group is best suited for the task.

Jonathon Jennings at quarterback is a big reason why the Lions get the nod, too. In his first year as a full-time professional starter, Jennings sits third in the league for passing yards and his 16 total touchdowns (13 passing and 3 rushing) have him near the top of that category, too. Jennings is dynamic, explosive and exciting to watch; he has the stuff to be able to lead BC over anyone in this league on any given weekend.

Finally, there’s the Wally factor. Some were skeptical when the legend decided to return to the sidelines for this season while others just weren’t sure what to expect. There’s something to be said for having arguably the best coach in league history on your sidelines, though. Buono still has it and is a big reason why the Lions sit with the CFL’s second best record right now.

Barring something dramatic happening over the next two months, Calgary is going to be favoured in every playoff matchup it’s part of because it is the best team in this league. If anyone has a chance to knock the the Stamps off, though, I think it’s the Lions. After all, they’re the only team to do it this season!

Just because I thought the Bombers came out looking great in their two big moves this weekend doesn’t mean I didn’t like the move made by Toronto. The Argos gave up a lot to acquire Drew Willy, but I think they’re doing the right thing in taking a shot at him.

I like Willy and as I mentioned earlier I still think there’s a ceiling for him to reach. More importantly, though, this move helps Toronto both now and down the road.

In the immediacy, the Argos will get a somewhat proven quarterback to help fill the void left by Ricky Ray. Willy has won in this league and is a far more tested commodity than what Toronto had on its roster prior to making this move. The Argos are in a wide open race for an East Division title and their 33-21 win over Hamilton on Sunday opened things up even more. 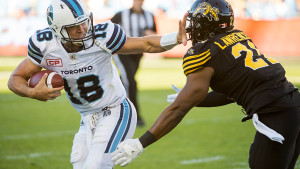 But this move isn’t just aimed at right now. Willy’s ceiling likely won’t be reached this season after a trade 12 weeks in. At 29, though, Willy is going to be looked upon as Toronto’s starter for years to come and that’s how he’s going to reach his full potential if it’s going to happen.

Yeah, I really like what Winnipeg did this weekend, but I don’t mind it for the Argos either. If Willy is fired up and motivated like a lot of people think he will be, this could pay dividends for quite some time.

We touched on this last week, too, but the Ottawa REDBLACKS are about to start off a crucial, extremely difficult stretch. At 5-4-1, Ottawa sits all alone atop the East Division, but the REDBLACKS’ spot is tenuous at best. They’ve got the Argos and Tiger-Cats nipping at their heels with the Alouettes not that much further back. Coming off their second and final bye week, it’s go time for the REDBLACKS, or at least it better be.

As they start off their final eight game stretch, the REDBLACKS still have some tough western matchups to worry about. Ottawa still has to play Winnipeg twice, the Lions once more and the league-leading Stamps again, something it will do this weekend.

Inside their division, the REDBLACKS have one more crucial showdown with Toronto and two huge back-to-back games in October against Hamilton. With Saskatchewan the only soft spot left on its schedule, Ottawa has arguably the most difficult road to the post-season remaining. And, if you take into account the Riders picked up their only win against the REDBLACKS, it’s pretty easy to see just how formidable the next eight weeks will be.

All that said, I still think Ottawa is up to the task. The REDBLACKS are on top of the East Division for a reason and played for last year’s Grey Cup because they deserved to. I still think the REDBLACKS are the team to beat out east and that assertion is going to be put to the test starting on Saturday night.