MONTREAL – The Montreal Alouettes announced on Monday that the club has named Jacques Chapdelaine as the team’s interim Head Coach for the remainder of the 2016 football season, effective immediately.

Chapdelaine joined the Alouettes in 2016 as the wide receivers coach and special assistant to the offensive coordinator after having served as an Offensive Coordinator in the CFL for seven of the ten prior seasons, including for the BC Lions, Edmonton Eskimos and Saskatchewan Roughriders. His distinguished CFL coaching career includes four Grey Cup appearances and three Grey Cup Championships. Chapdelaine was the Head Coach of the Laval University Rouge et Or from 1997 to 2000, winning the first Vanier Cup in school history in 1999.

Owner Bob Wetenhall said, “Jacques is an excellent football coach; he knows the Xs and Os as well as how to get the most out of his personnel. He brings rich experience working with seasoned veterans and teaching talented young players. We have six games left this season and are only two games out of playoff contention. Jacques is the best person to lead an immediate turnaround as we try and make a playoff run. ”

» Ferguson: Coaching change the right move for Als, but what’s next? 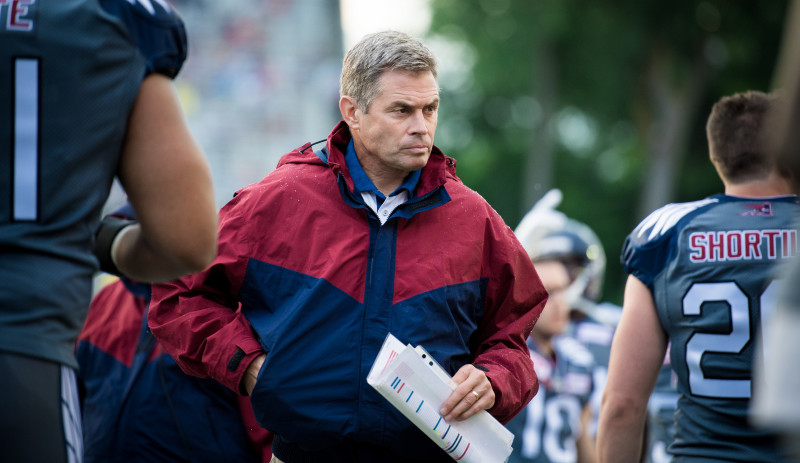 Andrew Wetenhall, the Club’s Lead Governor, said, “A head coaching change mid-season is challenging, but Jacques is the right man for the job. Both Jim Popp and [Club President & CEO] Mark Weightman played vital roles in this decision process which led to a unanimous selection, and we believe Jacques will catalyze an immediate and positive effect as we try to make the playoffs.” Wetenhall added that the club will “commence a comprehensive evaluation process for our permanent Head Coach beginning in October of this year. Each of our current coordinators, as well as Jacques, will be fully vetted as part of this interview process.”

New Interim Head Coach Jacques Chapdelaine indicated, “I want to thank the Alouettes organization and the Wetenhall family for their faith in me. This team has a lot of talent; we have six games left, and we are still in it. When I was coaching in BC in 2011, we made a run like this and ended up winning the Grey Cup; that’s possible for this group of players.”

Chapdelaine will make his debut as the 22nd Head Coach of the Montreal Alouettes on Sunday, Oct. 2 when the Alouettes host the Toronto Argonauts at Percival-Molson Memorial Stadium in what will be an important match-up in the East Division playoff race.