Ferguson: Alouettes’ coaching change the right move, but what’s next?

Ferguson: Alouettes’ coaching change the right move, but what’s next?

MONTREAL — In a season full of wrong turns in Montreal, the team has done something right. Jim Popp stepped away from his responsibilities as coach Monday after a 20-17 road loss in Week 13 dropped his beloved Alouettes to 3-9 on the season. Good for dead last in the CFL’s East Division.

The decision had to be made. Many around the league suspected this was the next step for Popp, who now holds a career 22-36 coaching record. With all that said, you still have to give Montreal credit for dropping the axe and making a change.

Regardless of their record, the Alouettes are still a proud organization with a distinguished group of positional coaches assembled who aim to uphold that standard. Kavis Reed, Jacques Chapdelaine, Anthony Calvillo, Noel Thorpe, Anwar Stewart and more. 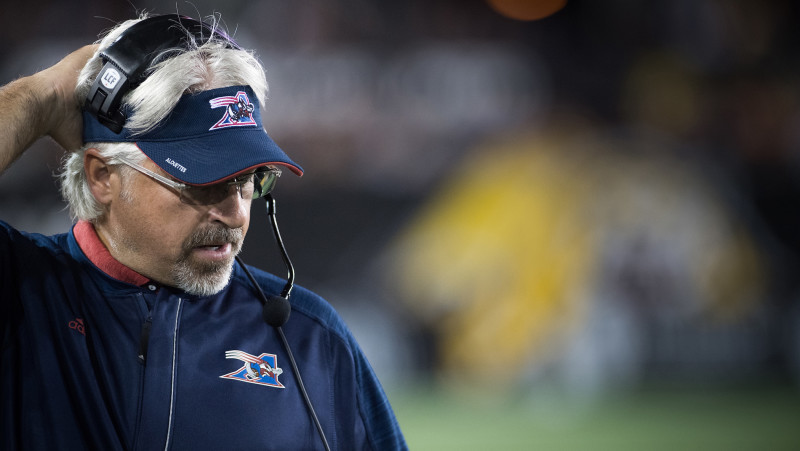 The issue with Jim Popp and this season is that the Alouettes have failed to uphold that standard and much of the blame inevitably fell at Popp’s feet.

His inability to solve the quarterback situation and botched handling of the Duron Carter bump led many around the league, players and coaches to wonder exactly what the problem was in Montreal.

The question now becomes what comes next for the Alouettes? Making changes is easy. Hiring the right people is incredibly difficult, especially under the circumstances of a mid-season switch and a team without an identity.

Word came down Monday afternoon that Jacques Chapdelaine would assume the interim head coaching role. There is nothing wrong with hiring Chapdelaine. He is a Quebec native and knows the Canadian game as well as anyone. The immediate line of questioning surrounding the promotion isn’t about Chapdelaine’s quality but his competition.

Noel Thorpe seemed ready to make the jump. Anthony Calvillo has been rumoured as the future. Kavis Reed has direct experience as a previous CFL head coach and served as a voice of reason while Rakeem Cato feuded with teammates last week.

Yet the man for the job right now is Chapdelaine.

Coaching changes are very rarely about altering X’s and O’s. They are about organizations showing that they are making an effort to improve the situation. The Montreal situation falls directly under that canopy.

While I believe in his experience and worth, this could be more of an olive branch to fans. Chapdelaine is a well known commodity. He is a francophone and will make decisions with a blank slate and minimal guilt. There is no blood on Chapdelaine’s hands for what has happened this season.

Montreal did what was required, but now the real question: what is the long-term plan?

In a perfect world there would be a perfect candidate waiting in the wings with a long history in the organization. The Alouettes might have three such options in Calvillo, Thorpe and Reed. Not to mention the outside chance that Chapdelaine has the interim tag removed and gets a chance to become the first french-speaking head coach in the 22-man history of bench bosses in la belle province.

Some might deem the multitude of internal options as a weakness rather than a strength. As the old saying goes, ‘when you have three quarterbacks it just means you don’t have one’.