Berg vs. Ferg: Which coaching job stands out most? 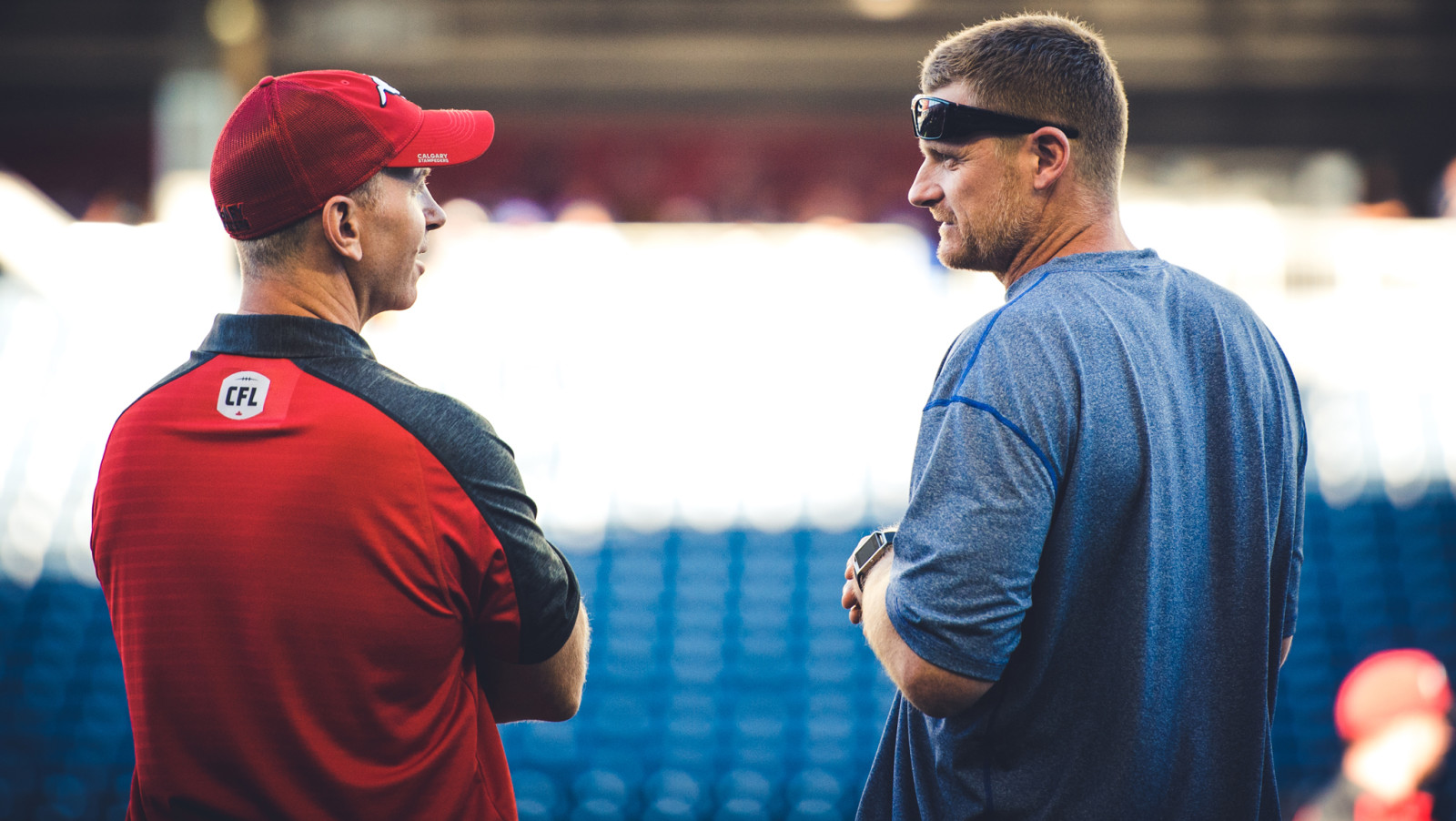 Berg vs. Ferg: Which coaching job stands out most?

Every week of the 2016 season, CFL.ca columnists Pat Steinberg and Marshall Ferguson debate over one of the league’s most contentious storylines. This week, we ask the question: which coach has impressed you the most so far in 2016?

Bo Levi Mitchell winning Most Outstanding Player come November might just be a formality. The AGF Coach of the Year, on the other hand, could be a different story.

Dave Dickenson has put together a season for the ages in his first as a head coach, guiding the Stampeders to a 14-1-1 record through 16 games with a strong possibility of making CFL history. But he’s far from the only coach to make a significant impression in 2016.

» Related: Despite win, Dickenson unhappy with Stamps’ lack of focus 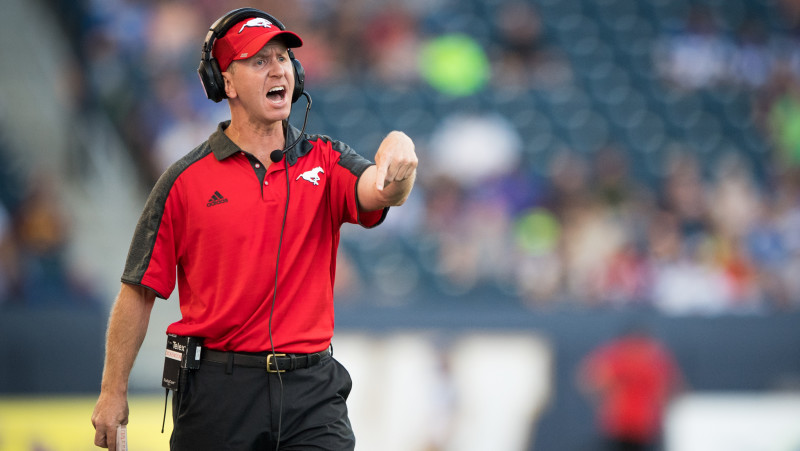 Dave Dickenson leads the AGF Coach of the Year discussion so far in 2016 (Johany Jutras/CFL.ca)

Chris Jones essentially rebuilt the Riders from the ground up and after a disappointing start has seen them win four straight games. They won’t make the playoffs this season yet what he’s been able to accomplish over the span of a season is nothing short of remarkable, giving Riders fans plenty of hope heading into the team’s first season at the new stadium.

Then there’s Wally Buono, who some may have let slip under the radar heading into the season. Buono took a Lions team that’s struggled to find an identity in recent years and made them into one of the league’s true powerhouses. The Lions are strong on all three sides of the ball and while they’re coming off back to back losses to Winnipeg, they’re a team that’s proven it can beat anyone in the league.

Finally, how can anyone ignore the work of Mike O’Shea? One of the longer-serving CFL coaches, fans in Winnipeg were growing wary of a Bomber team that hadn’t made the playoffs since 2011 — and after a disastrous 1-4 start it was O’Shea who was on the hot seat. The rest, of course, is history, as the Bombers won seven straight and now nine of their last 11 to move into second in the West with a chance of hosting a playoff game.

Pat Steinberg and Marshall Ferguson debate in the latest Berg vs. Ferg.

FERG (7-5): A REMARKABLE TURNAROUND FOR O’SHEA

Mike O’Shea was on the edge of the hot seat inching closer to its centre through the first six weeks of this season. I remember being on a road trip this season with the Tiger-Cats and talking to media types who were trying to figure out when, not if O’Shea would be let go.

The offence was stagnant in Winnipeg. The defence couldn’t stop anyone and the special teams – O’Shea’s specialty – looked remarkably unremarkable.

Then something the CFL has seen too much of this season happened. The Bombers switched quarterbacks. Unlike the Ticats or the REDBLACKS, this change wasn’t born from injury. The decision came from the top down, an attempt to energize the squad.

In Week 6 against the Eskimos, Matt Nichols took the reigns. At the same time, players previously thought expendable such as receiver Clarence Denmark were brought back.

All of a sudden. the defence took its ball hawking ways to a whole new level. The offence exploded and looked as productive as the record-setting seasons in Alberta, and the special teams looked like something a former special teams coordinator would produce.

Whether you feel comfortable giving O’Shea full or partial credit for any of this is a fair debate. What cannot be denied is the fact that with his job security in peril and a lacklustre start to the season, Mike O’Shea took control of the situation, changed the ship’s direction, avoided the iceberg that was Labour Day against a fledgling Riders 2016 roster and sailed smoothly into Vancouver securing a meaningful road win and control of second place in the West.

The job O’Shea has done has changed more than personnel and ticket sales. It’s grown belief in a team many thought to be destined for a down season. That’s special. That’s what coaches legends come from. Imagine how the legend would grow if Winnipeg could go from their rough start to a Grey Cup championship…

» Related: Bombers turn the tide in comeback win over Lions

BERG (5-7): NOTHING CAN TOP WHAT DICKENSON HAS DONE

It might be the easy way out to choose the head coach of a 14-1-1 for this conversation and it might be convenient for me to go down that road living here in Calgary. But Stampeders head coach Dave Dickenson’s work in his first year at the helm has been remarkable. He currently has the Stamps on course for one of the dominant seasons in the history of the CFL. The best part is, I never saw it coming.

Heading into the 2016 campaign, I thought Calgary was going to be good, competitive and in the conversation. I thought it might be a year in which the Stampeders fell slightly back to the pack while the rest of the West Division got a little closer.

After all, Dickenson was a first-year head coach with a first year defensive coordinator in DeVone Claybrooks. On top of that, the Stampeders had said goodbye to long time defensive leaders Juwan Simpson and Keon Raymond along with elite playmakers Eric Rogers and Jon Cornish. There was every reason to think Calgary might not enjoy a dominant season. I couldn’t have been more wrong.

Instead, Dickenson has taken over and this team has gotten even better. Dickenson’s offence is as efficient as it gets and it’s designed perfectly for quarterback Bo Levi Mitchell. On the attack, the Stamps are all about quick reads, quick routes, and quick passes and right now they’re the hardest offence to stop in the league. Yes, Dickenson has been in charge of the offence for a number of years, but now in his first year as head coach, it’s better than it has ever been.

Let’s give some credit to Claybrooks, too. In his first year as defensive coordinator, he has the Stampeders at or near the top of every important defensive category in the league. He and Dickenson have formed a great pair on the sidelines and they’re doing it with no prior experience in their roles. That’s pretty darn impressive.

Ferg’s choice of Mike O’Shea for this topic is a great one because he’s done a great job in Winnipeg. Wally Buono’s been great in BC, too, while Jason Maas is coming into his own on Edmonton’s sideline. But the Stampeders are in the midst of one of the most incredible seasons in league history, and as such, I have to give the nod to Dickenson.