The team confirmed the news Monday morning after both players initially revealed on Twitter that they had been released.

Carter and Stafford would be eligible to sign with new teams but not to play or dress on a 44-man roster again this season, according to Section 8, Paragraph 15 of the Canadian Football League bylaw, which states that “a player deleted from a club roster after the deadline shall not be eligible to play for another Member Club until the following year.”

Where will Carter, Stafford land next? 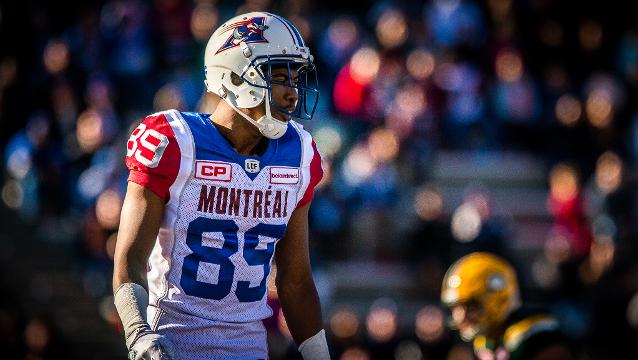 CFL.ca’s Marshall Ferguson looks at next steps for two of the league’s premier receivers … Read More.

Carter, 25, is in his first season back in Montreal after joining the team as a free agent early this year. The Ft. Lauderdale, Fla. native spent two seasons with the Alouettes from 2013 through 2014 before landing south of the border with the NFL’s Indianapolis Colts.

Throughout three seasons with the Alouettes, Carter logged 2,877 receiving yards and 17 touchdowns.

Stafford, 26, also re-joined the Alouettes this season after spending 2015 with the Edmonton Eskimos and winning a Grey Cup Championship.

FYI: Players released by their team following the Trade Deadline CAN be signed by any team but CANNOT play or be on 44-man roster for ’16

Plagued by injury, Stafford played in nine games this year, catching 16 passes for 215 yards and a pair of touchdowns.

The moves come as the Alouettes struggle towards a second straight non-playoff season. The Als are currently 4-11, having gone 1-2 in three games since making a coaching change from Jim Popp to Jacques Chapdelaine.

The Alouettes are coming off a 22-8 loss to the Stampeders in Calgary in which both Carter and Stafford were held without a catch.

While Carter’s production is among the league’s elite receivers, the 6-foot-5, 205-pound pass-catcher has sometimes been in the headlines for the wrong reasons during his time in Montreal — including earlier this year when he was suspended for one game for his role in an altercation with Ottawa REDBLACKS head coach Rick Campbell.