Next Man Up: Austin will need to juggle lineup with Banks out

Next Man Up: Austin will need to juggle lineup with Banks out

HAMILTON – With just three games left in their regular season – three games that are crucial for a push for the East Division crown – the Hamilton Tiger-Cats will be without one of their most dynamic players for two of them.

Brandon Banks was handed a two game suspension for testing positive for a banned substance on Wednesday. That means the receiver will not be in the lineup when the Tiger-Cats head to Ottawa this week to take on the REDBLACKS, in the back half of a home-and-home, and will also be on the sidelines when the Edmonton Eskimos come to town in Week 19. 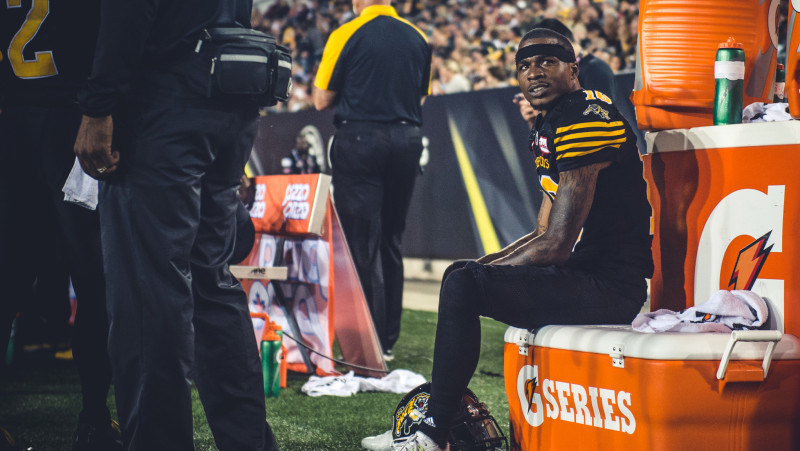 Brandon Banks will have to sit on the Tiger-Cats’ sideline for the next two games (Johany Jutras/CFL.ca)

“To say I’m not disappointed is probably not the truth,” Tiger-Cats’ Head Coach Kent Austin said about Banks’ suspension. “I know he’s been disappointed in me too. That’s the way relationships are. Brandon knows that I love him and we’re supportive. He made a mistake and he has to make better decisions in the future.

After the news broke about his suspension, news that Banks said he had known about for a few weeks, the 28-year-old addressed his teammates before Wednesday’s practice – apologizing and taking full ownership of his actions.

“I let them down because at this moment, it’s a critical game that we’re going into this weekend. So I let them know and hopefully they accept my apology. I’m pretty sure most of them did but if they didn’t, I’m pretty sure over time I can win them over.”

Heading into the matchup against the REDBLACKS, the Tabbies will have the task of replacing their star special teamer. This season, Banks had 57 punt returns for 569 yards and a touchdown, 53 kickoff returns for 1205 yards and three missed field goal returns for 433 yards and two touchdowns. The Kansas State alumnus also collected 29 receptions for 355 yards and four touchdowns on offence.

“We feel like we have other guys that can come in and play,” Austin said when asked of who will be replacing Banks. “We’re confident in Kendial (Lawrence), he’s played with us before in the past. He’s a proven player and a proven returner so we feel like we’re going to be okay.”

“I let them down because at this moment, it’s a critical game that we’re going into this weekend. So I let them know and hopefully they accept my apology.”

Kendial Lawrence, who Hamilton signed to the practice roster just a few weeks ago, will likely be the replacement for ‘Speedy B’ when the ‘Cats hit the field on Friday in Ottawa.

The five-foot-nine running back, who played with Hamilton back in 2013, had a similar role to Banks’ this season with the Saskatchewan Roughriders. In 11 games with the Riders, he had 33 kickoff returns for 690 yards, three missed field goal returns for 50 yards and 27 punt returns for 286 yards and one major.

“(I have to) just keep doing what I’ve been doing for the past two or three years,” Lawrence said of filling in for Banks. “What my role on my past teams (has been is) returning kicks and making flash plays, so I plan on just stepping in on his role and continue what he’s been doing here and try and help us get a win.”

And with just three points separating themselves from the REDBLACKS for first place in the East, they’ll need to do everything they can to get that victory.

As for Banks, he’s going to take the two weeks to prepare for his return to the field and to get himself “better as a person.” Aside from that? He’s going to be the Tiger-Cats’ number one fan.

“I’m just going to stay in top shape and be the number one cheerleader this weekend,” he said. “I’m just going to cheer my team on and like I said, I’m going to come out here next week and give them a good look on the scout team and just go from there. (I’ll) take it a day at a time.”