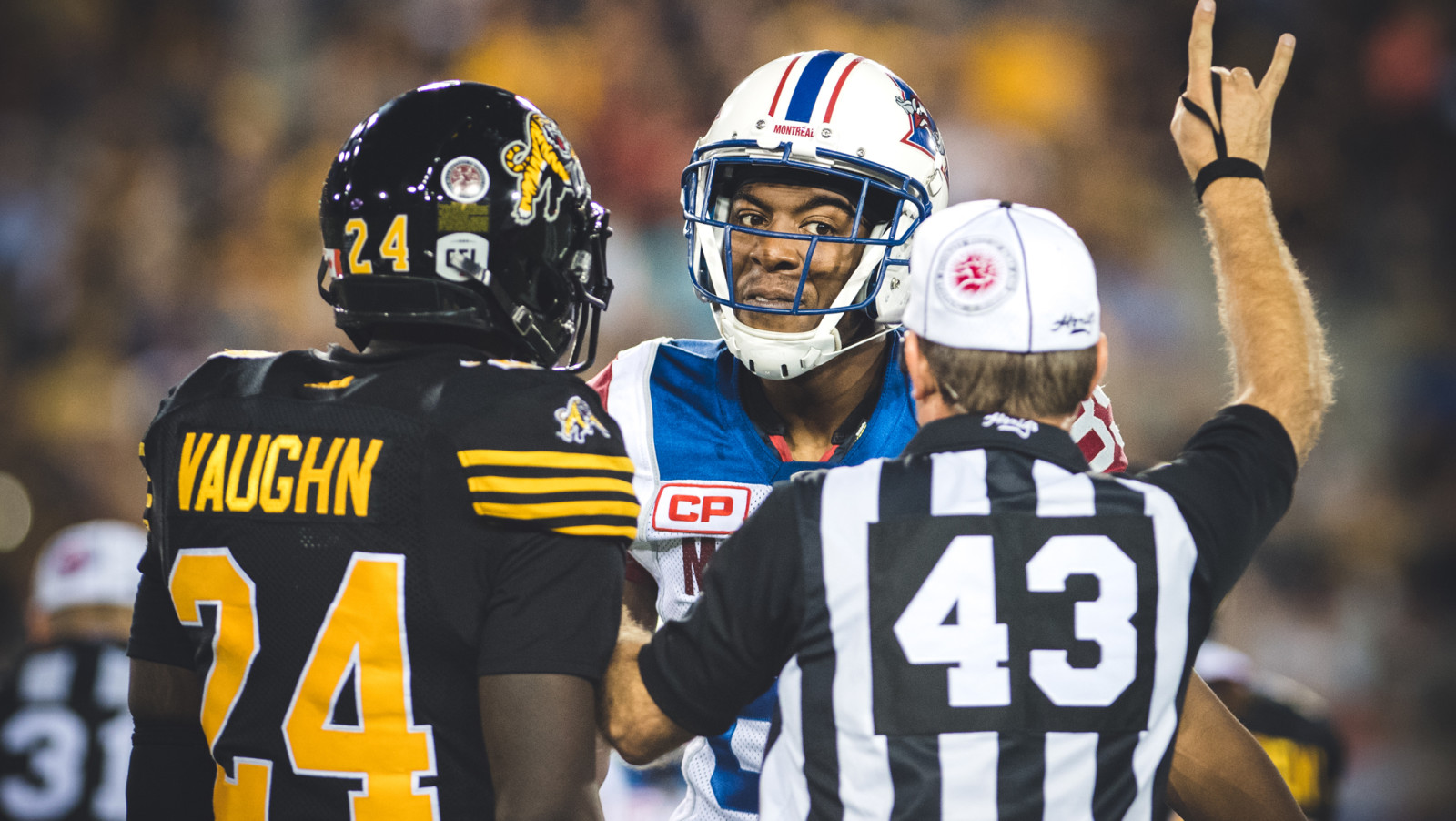 Every week of the 2016 season, CFL.ca columnists Pat Steinberg and Marshall Ferguson debate over one of the league’s most contentious storylines. This week, we ask the question: should a team take a gamble on Duron Carter next season?

Duron Carter is one of the best receivers in the CFL on the field. And, whether it’s right or wrong, he’s also gotten a bad reputation off of it.

Carter’s resume can do most of the talking on both of these regards. The question is, after being released by the Montreal Alouettes, is the talent worth any potential trouble that follows?

Despite being a team that is struggling offensively, the Als, a team that has stood by Carter for a while now, could no longer say it is. 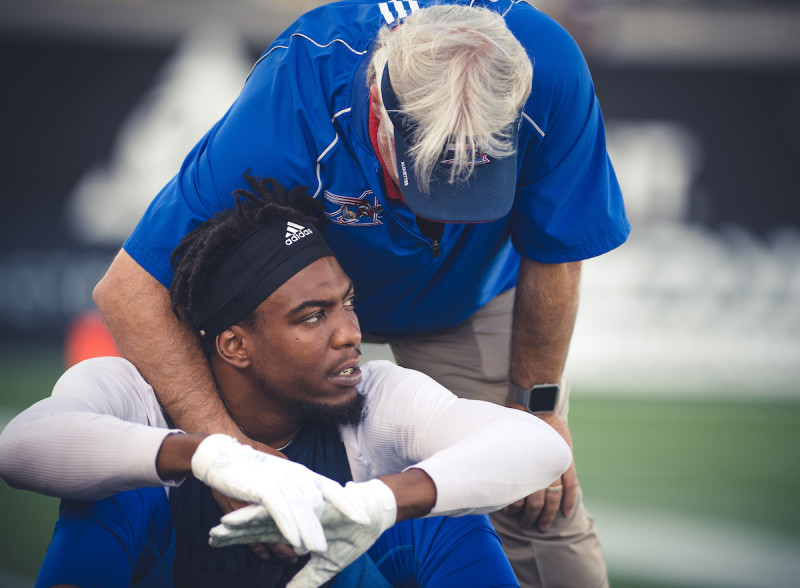 Maybe it was the losing. Maybe the quarterback changes didn’t help. And maybe Carter would be a non-issue on a more competitive team that isn’t struggling to find an identity.

Those are the questions that need answering, and while Carter isn’t allowed to play this year (due to being released following the trade deadline), we’ll know soon enough.

Few receivers have out-produced Carter over his last two years in Montreal (Adarius Bowman is the one that comes to mind). In three CFL seasons, the 25-year-old has 2,877 yards and 17 touchdowns over 40 games — an average of 71.9 yards per game which over a full season projects to 1,294.2 yards.

At 6-foot-5, 205 pounds, Carter can’t be left in single coverage. He wants the ball every play and he’s the type of player that can carry an offence.

There’s a chance Carter is an affable teammate and just needs the right situation. Is it out there?

We put Steinberg and Ferguson in the GM chair and ask them to make the call: do you sign Duron Carter?

The debate heats up in the latest Berg vs. Ferg.

Duron Carter is a sensational player.

He has the skill set every coach and recruiter looks for in a young receiver. Carter is lengthy, explosive and has hands strong enough to take home the large stuffed animal from the carnival hammer swing.

I understand many fans’ perspective that Carter is too volatile an off-field personality to validate signing him. The facts are there in front of you to parse and form your own opinions. He bumped Rick Campbell, he was involved in a practice argument with quarterback Rakeem Cato and he LOVES to talk.

My issue with the idea of bringing in Duron Carter is not about his decisions outside the white lines, rather his career trend between them.

Carter is a ball dominant receiver. If he does not get targets, he does not produce. He has not been asked to contribute in any way other than being a high ball leaper. I believe the CFL is all about getting bang for your buck and for the amount Duron Carter will demand you could maximize talent and production in a variety of ways throughout your roster.

On a Montreal offence where Carter was the focal point his catch percentage left something to be desired. His 94 targets before being released by Montreal were second on the team to Nik Lewis (111) yet he ranked fifth out of seven Alouettes receivers in catch percentage (65 per cent) on the team with a minimum of 30 targets.

Not surprisingly, the player with the lowest catch percentage on the team was also released in Kenny Stafford (52 per cent). Many will argue the catch percentage statistic does not paint an accurate picture. Quarterbacks, play calling, batted balls etc. could be to blame. This can be true but to me it tells a larger story.

Carter demands the ball to be successful. As a result, teams roll coverage towards him and attempt to eliminate him which leads to frustration and outbursts. Carter is an immensely talented receivers, but there are better options.

Duron Carter is one of the better receivers in the CFL. From a strictly football standpoint, that fact would be all you need to know when debating this topic. In Carter’s case, though, you have to look beyond just the football field when deciding whether he’d be a fit on your team.

Carter carries with him a fair bit of baggage stemming from his reputation and past incidents while in Montreal. A team can’t ignore those things, but for me, adding a talent of his level still wins out.

With 938 receiving yards through 14 games, Carter sits 11th in the CFL in that category while his 15.4 average per catch puts him seventh among receivers with 600 yards or more. Only 25 years old, I think Carter still has a number of productive seasons left in him. In fact, putting him on a team with a more solidified quarterback position could very likely boost his totals even more. It’s tough to argue how much of an immediate impact Carter would make on any team in this league.

In saying that, though, I can’t bury my head in the sand either. Carter was Montreal’s leading receiver and he was still released. He’s been involved in numerous well-publicized incidents, whether it be with a teammate during practice or with an opposing coach on the sidelines. To ignore things like this would be foolhardy, and any team signing him would really need to do its homework before pulling the trigger.

I guess I’m not ready to give up on the possibility Carter can put his off-field difficulties behind him. In fact, I think there’s a good chance he can. Getting released by Montreal has to serve as a wake up call for Carter, especially knowing the timing and the circumstances. Furthermore, it’s not like he’d be the first guy to move past, well, the past.

Jerome Messam is very likely going to win the league’s rushing title this year and has been a crucial part of Calgary’s dominant regular season to date. Messam’s pro career wasn’t always so rosy though. Messam’s first little while in this league was checkered with incident after incident. He was charged with assault at a nightclub; he got into it with a BC Lions teammate; and he drew the ire of the veterans on his team. When all this was happening in 2010, very few would have expected him where he has now. When you add a few wake up calls with a steady dose of maturity, though, you can form a much different story.

I don’t know if Carter’s behavior off the field will change on a new team or not. I do know, though, there are plenty of examples of players who respond favorably to a change in scenery. I think that’s exactly what Carter needs to get things back on track.

We already know what Carter can do on the field, and in the end, I think that knowledge should keep him employed for next season. Where that is I’m not sure, but if and when someone does sign him, Carter needs to make sure he focuses on one thing and one thing only: football.

Fan Poll
If you're a GM, are you signing Duron Carter next season?
Yes
Vote
No
Vote
Submit View Poll Results