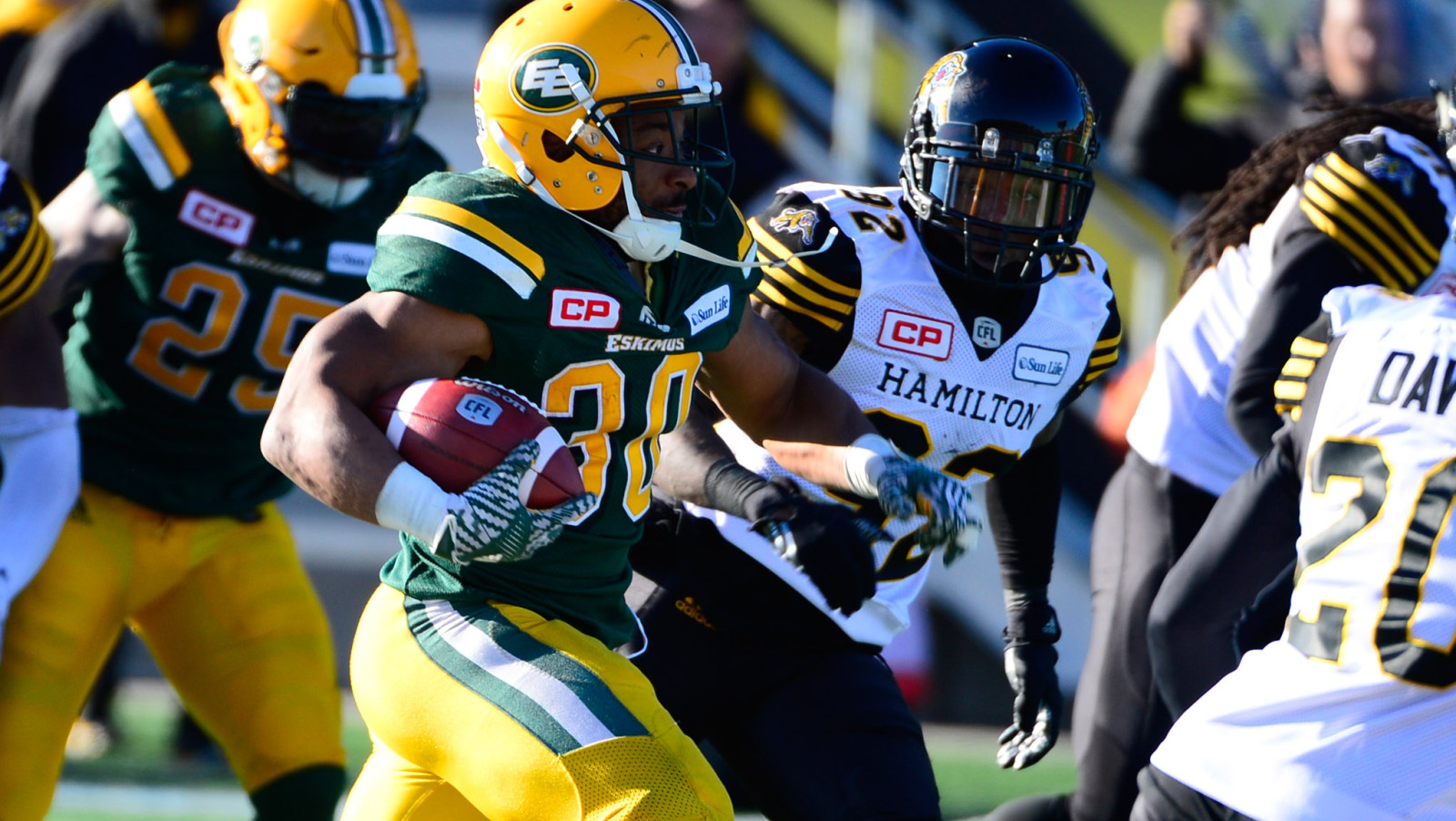 Week 1 of 2016 playoff action set a high bar. The four teams in action on Semi-Final Sunday put on an outstanding show and gave us arguably the two best games of the season. There was one individual performance in each game, though, that stood apart from the rest. Those two performances are my biggest takeaways from an outstanding day of CFL playoff ball.

John White was incredible in Edmonton’s 24-21 win over Hamilton in the Eastern Division Semi-Final. He racked up 160 yards on the ground, scored a pair of touchdowns, and almost singlehandedly gave the Eskimos a nice cushion heading into halftime in a game they never trailed in. White was the overwhelming standout against the Tiger-Cats, but we shouldn’t be surprised by that.

2016 has been a slow burn for White, but you could see a performance like Sunday’s coming for a few weeks now. In fact, White had gone over 100 yards on the ground in three of his final four games this season and counted for five touchdowns; he had just three touchdowns and one 100-yard performance in his first ten games combined.

You can understand why it took the better part of this season for White to really find his game. Let’s not forget he missed the entire 2015 season thanks to a blown Achilles suffered during training camp. There’s a lot that goes into coming back from an injury like that. White had to regain his confidence with the ball and he had to find his way in a new offence. With those things accomplished, we’re seeing the White that tore things up pretty nicely in 2014.

Despite playing only nine games two seasons ago, White finished third in rushing yards and emerged as one of the true running stars in this league. While his injury in June of last year derailed things, White has proven it was only temporary because he looks every bit as good as he was in 2014.

I don’t think there is any coincidence at all we saw the Esks get hot at end of the season right when White started to roll. Yes, with Mike Reilly, Adarius Bowman, and Derel Walker, Edmonton boasts a terrifying aerial attack and it carried them for the majority of the season. With White back at the level he’s at now, though, the Eskimos have a far more varied and multi-dimensional offence.

I don’t see Edmonton changing their game plan with White come Sunday’s Eastern Division Final. The Esks found success early by pounding White up the middle and it opened up an effective short passing game for Reilly in the first half. Edmonton is looking to become the first crossover team to advance to a Grey Cup and with White cruising the way he is, it’s tough to bet against them.

Following White’s stellar return to playoff football we saw a quarterback in BC cement himself as one of the league’s brightest and most exciting stars. Jonathon Jennings was electric in a thrilling 32-31 Lions comeback win over Winnipeg in the Western Division Semi-Final. It didn’t necessarily look that way to start, though.

While Sunday’s wasn’t Jennings’s postseason debut, it was his first ever home playoff game. I think you saw some nerves get to him in the first half against a very good ball-hawking Bombers defence.

Jennings looked out of sorts throughout the first quarter and seemed to get more and more rattled every passing series. BC was ineffective in their first three possessions and Jennings turned the ball over twice in that span. As such, Winnipeg was up 11-0 after one quarter and the Lions dug themselves a very deep hole. I give Jennings a ton of credit, though, because he responded the way a leader needs to.

While you could start to see him come around late in the first quarter, it was what we saw after halftime that resonated most with me. The Jennings we saw in the final 30 minutes was a force to be reckoned with, and I think his baptism by fire in the first quarter was a huge reason for that.

If you take a look at what we saw early in the game from Jennings and how he played during BC’s comeback, it really was night and day. Jennings got rid of the ball quickly as the Lions wrestled momentum away from Winnipeg and he was putting balls where only his receivers could get them. He wasn’t doing that to start the game.

What more can you say about his game-winning nine-yard run late in the fourth quarter, though? That’s a play I’ll always remember and one that will, and should be, associated with Jennings throughout his career. I thought Jennings was a star in the making throughout the 2016 season. After his performance against the Bombers on Sunday, you can drop the “in the making” from now on.

I don’t like to pile on after a tough loss, but a curious decision by Mike O’Shea and the Bombers at the end of Sunday’s Western Semi.  Let me preface by saying, head coach O’Shea’s decision to allow Justin Medlock to kick a 61-yard field goal with 36 seconds to go wasn’t the reason why Winnipeg lost.

PHOTOS OF THE WEEK: THE BEST PHOTOS FROM THE DIVISION SEMI-FINALS

Photos of the Week: Division Semi-Finals

After using his timeout to unsuccessfully challenge a missed pass interference call on a knocked down pass, O’Shea sent out Medlock for a potential game winning field goal. However, it was such a low percentage proposition, even for the best in the game.

The Bombers were third-and-four with 36 seconds remaining. While not a slam-dunk, Winnipeg was looking at a makeable third down with plenty of time left.  For me, Medlock hitting from 61 was a pipe dream and I would have gone with the surer thing to put him in a better spot. Even another six or seven yards would have put Medlock in a far more makeable range and that’s what I would have opted to do.

Fans of the Eskimos and Lions will be doing plenty of finger crossing this week. Edmonton lost quarterback Mike Reilly in the fourth quarter against Hamilton thanks to an upper body injury while receiver Manny Arceneaux had to exit for the Lions after being belted by Taylor Loffler in the third quarter.