Cauz: From heartbreak to heroism, Sunday’s Semi-Finals had it all 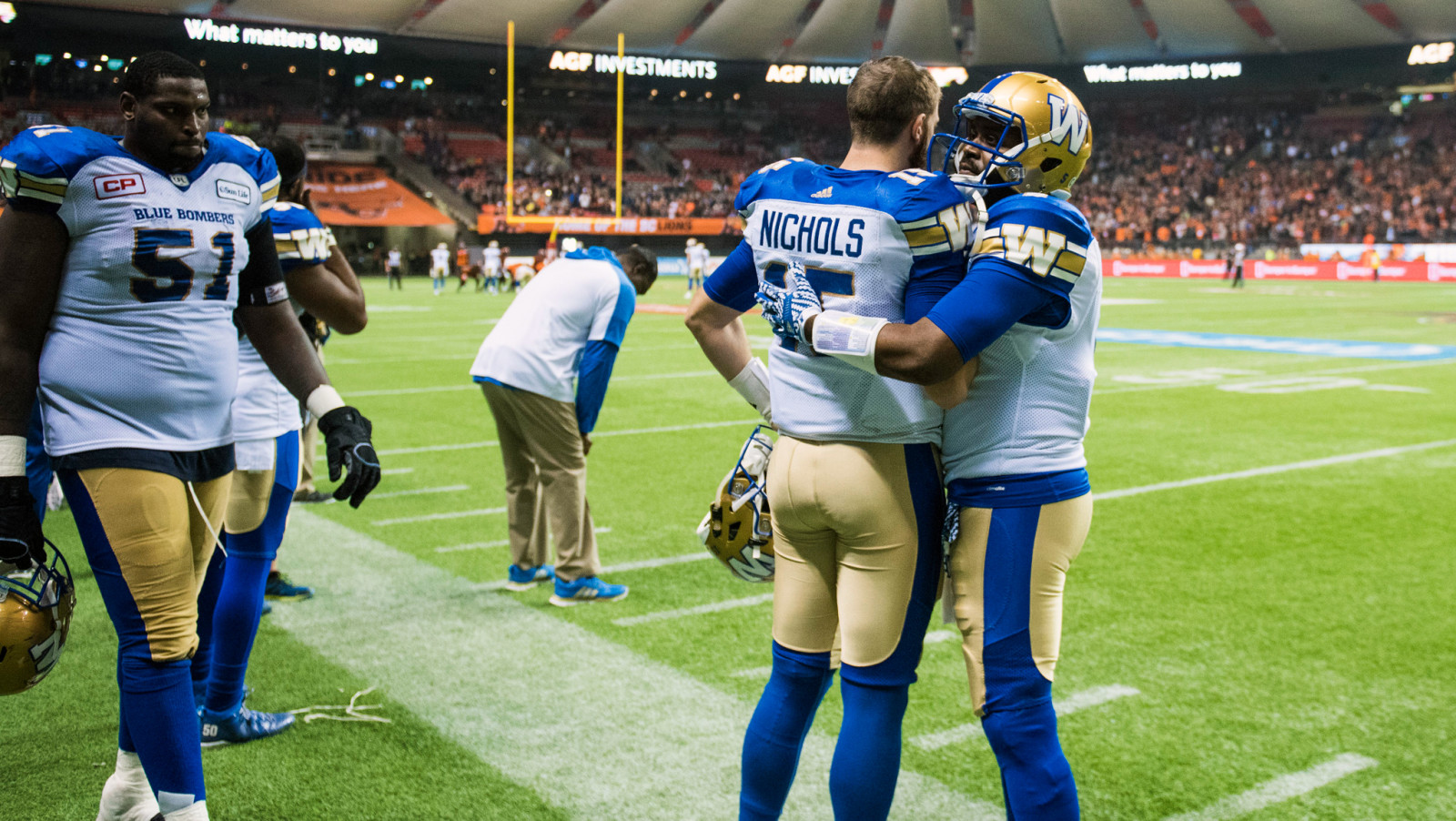 Cauz: From heartbreak to heroism, Sunday’s Semi-Finals had it all

I hate when members of the media shame fans for being too negative about a certain play or try to tell them how they should feel about a particular game. It’s condescending and it ignores the fact that sports is a place where you can get away with irrational spikes of emotion because let’s face it, there really aren’t any real world implications to being overly upset about an interception, a missed holding call by an official or a curious coaching decision. So let me instead offer up a mild suggestion about how we should look back at that super crazy fun Western Semi-Final.

Don’t focus on the missed field goal at the end. Pay no attention to the criticism being levied on Mike O’Shea for sending out Justin Medlock to attempt a near-impossible field goal when the odds screamed to go for it on third down. I understand why you’re still shocked at that decision. Matt Nichols was having a career game and Coach O’Shea was asking far too much from Medlock to attempt a field goal of such length with so much pressure riding on him. But considering how damn good that game was, why would you want to focus on that one play? Why dip your toes in the pool of negativity when the alternative is to splash around in all the good that game provided? (Note: Winnipeg fans, I don’t expect you to buy any of this but just remember how bad it was for you all at the end of last season).

This game had almost 1,000 yards of offence, 63 total points, a crazy comeback, a coming out party for Matt Nichols and the ascension of Jonathon Jennings. I mean this game had it all. I loved the way Winnipeg played with Matt Nichols attacking the Lions downfield and finishing with a career high 390 yards and four plays of 40 yards or more.

My biggest knock on Nichols was that his ceiling was a high-end game manager. There is nothing wrong with being that type of quarterback — you can certainly make a career out of it but the odds are you aren’t winning any Grey Cups. Teams that win it all with average quarterbacking are the exception to the rule. Nichols showed me on Sunday that maybe he has another level in him. Blue Bombers fans, while they are certainly crushed with how this game ended, should feel great about their future. If Nichols can perform like that in the biggest game of his career than maybe Winnipeg has found an answer at quarterback. Full credit to the entire Blue Bombers squad for pushing around a BC Lions team who the majority of people had picked to win on Sunday.

On the other hand, I know this will come out as hyperbolic but I feel what we witnessed from Jonathon Jennings is the start of something truly special. I’m not talking about a guy who will consistently put up good numbers and make a couple All-Star teams. Jennings’ play after that disastrous first quarter is the stuff that MOPs are made from.

I’m not sure what element of his game was more impressive: the mental fortitude to bounce back from those two early turnovers that led to a quick 11-0 lead for Winnipeg or the athleticism displayed as he managed to avoid being sacked in several key situations, including that nine-yard touchdown run in the final two minutes that gave BC its first lead of the day. It’s easy for a good quarterback to look elite when everything is going your way, but what about when you’re down 25-6 with fewer than two minutes in the first half? What about when you lose you best target, in this case Emmanuel Arceneaux, who was knocked out of the game with seven minutes to go in the third quarter?

It’s far easier for any signal caller to succeed when you’re playing with a lead with a healthy team and the opposing defence has no idea what you’re going to do. Go back and watch that game-winning drive by the Lions and you’ll see Jennings convert four second downs culminating with that touchdown run. In all of the chaos (much of it self-inflicted) Jennings looked like the calmest player on the field.

As mentioned above, this game was wild right from the start, each team exchanging big plays on both sides of the ball and the final outcome in doubt until the game’s best kicker missed an impossibly long field goal with 36 seconds left. So you’ll excuse me if I don’t pour all my emotional energy into one coach’s decision. I hope you can as well, but of course I ain’t judging you if you can’t (Alright, maybe a small amount of judging/shaming).

As for the East, I will just put my cards on the table and tell you I’m rooting for Edmonton to continue to win. This has nothing to do with my feelings about Ottawa and everything to do with what I feel is the single greatest thing about sports. It is the purest form of meritocracy that we’ve got. If you’re good, you get to play. If you do things right you, generally get rewarded. Yes, there are exceptions to this rule, but by and large, meritocracy rules the day. If I couldn’t have rooted for a seven-win Hamilton team then I damn sure can’t cheer for an eight-win Ottawa organization. Edmonton won more games in a tougher division and its “reward” is two straight road games as the path to the Grey Cup? I’ll credit Hamilton for making a game of it with a group of receivers that only the most fanatical devotees of fantasy football would have any idea who they were, but in the end, the better team won. Here’s hoping for a fully healthy Hamilton squad in 2017 and the eventual return of Andy Fantuz.

I know Hamilton and Winnipeg fans don’t want to hear this but the results from this past Sunday are exactly what the majority of fans not from Hamilton and Winnipeg wanted to see happen. In one playoff game we get a rematch of last year’s Grey Cup and in the other we get to see the league’s two best teams pitted against one another. Hard to do better than that.