Messam muscles his way to winning Most Outstanding Canadian

Messam muscles his way to winning Most Outstanding Canadian

TORONTO — Like a true Canuck, Jerome Messam walked up to the podium to talk to the media after winning the Most Outstanding Canadian award and politely thanked the first person to ask a question.

“First of all, thank you, sir,” Messam said to the reporter who congratulated him on the nod. “It means a lot (to win). To accept the award five years after I won the first time, it just feels great. I’ve worked very hard throughout my career to become a complete player and also be thought of as a great player on the field and off the field.

“I think being able to get this award now, later on in my career, it just goes to show how far I’ve come and the hard work that I’ve put in.” 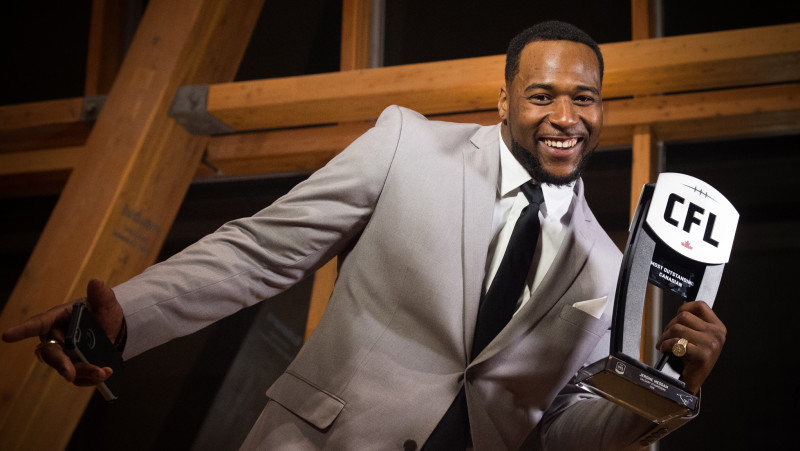 Messam was almost unstoppable this season, plowing through opponent’s defences and had arguably his most successful season since 2011 – the year he won his first top Canadian nod. This season, he doubled his previous best touchdown total of six – accumulated five years ago when he was a member of the Edmonton Eskimos – scoring 12, just one behind BC’s Emmanuel Arceneaux for the most in the league.

Messam also led the CFL in rushing yards with 1,198 and was only one of two players to rush for over 1000 yards.

The 33-year-old was versatile this season as he led the Stamps’ ground game but also acted as a pass-catcher, hauling in 485 yards receiving along with a major score – the most receiving yards in one year in his seven year career.

The Toronto, ON native accepted the award at the Art Gallery of Ontario in the heart of his hometown with members of his family in attendance to cheer him on – something that meant a lot to the running back.

“It’s just an amazing feeling to do it home in Toronto,” he said. “To have my dad here is just awesome. He hasn’t been able to come to many events because he works so hard but for him to be here tonight, that means a lot to me and I’m going to have a lot of family and friends at the game on Sunday.”

Messam will be competing for the 104th Grey Cup presented by Shaw on Sunday, when he and the Stampeders meet the Ottawa REDBLACKS for the final contest of 2016.

And to top it off, the man behind the bench that will hope to lead his club to a win at BMO Field, Dave Dickenson, was named the AGF Coach of the Year.

“It just says a lot about our organization and the caliber of talent that we bring in,” Messam said of the four other Stampeders to take home awards. “(It also shows) how hard our coaches work to get us prepared and to all of the candidates that won, how hard they work to be productive on the field.”

Ticats’ Chatham-born Andy Fantuz, who was the first Canadian receiver to reach 100 catches since 2008, was the runner-up.