TORONTO — Looking at the season the Calgary Stampeders had in 2016, you’d think the man standing behind the bench for 20 weeks was a seasoned vet.

Instead, it was a rookie, Dave Dickenson, who led the Stamps to a 15-2-1 record in the regular season and was named the AGF Coach of the Year at the Shaw CFL Awards.

And those 15 wins as a first year coach were a new league record.

The 43-year-old led the Stamps to a 16-game unbeaten streak in 2016, which was a single-season league record. The former quarterback also took his club to a 9-0 record at home at McMahon Stadium.

After accepting his award at the Art Gallery of Ontario in downtown Toronto, Dickenson was humble and tried to downplay his successful season, naming other head coaches around the league that he believed were worthy of winning the award. 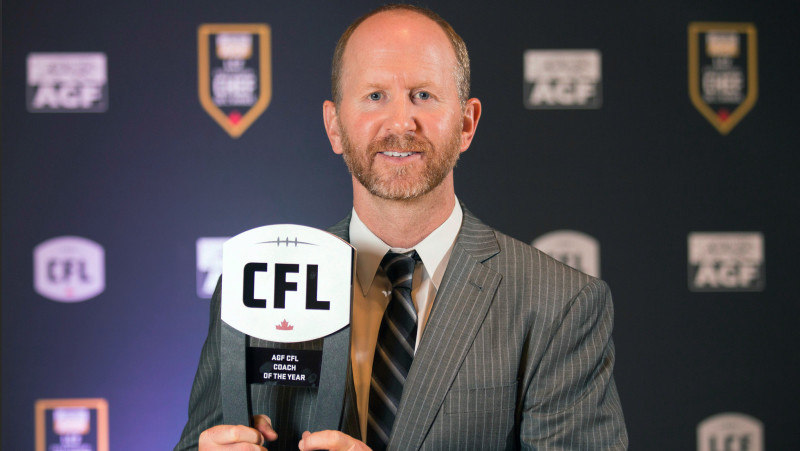 “I know there’s some other great coaches I thought obviously Rick (Campbell) has done a great job,” Dickenson gushed about the Ottawa REDBLACKS’ head coach, who was the East’s nominee for Coach of the Year. “Wally Buono, Mike O’Shea, I really believe were right there (to win the award).

“To be honoured is great but I’m a reflection of my players and you’ll see a lot of them tonight, as you already have. Coaches are very dependent on our talent and luckily I’ve got a lot of good players.”

Now, Dickenson will tuck his trophy away and switch his focus to making his first appearance in a Grey Cup as a head coach as he hopes to cap the Stampeders’ record-breaking season with a win at BMO Field.

“It’s a good start, it’s only down from here,” he said of the nod with a laugh. “But hopefully we’ll keep ‘er going this weekend.”