Mitchell: ‘I don’t know how we didn’t win’

Mitchell: ‘I don’t know how we didn’t win’

They had expected to sip champagne out of the Grey Cup but instead the Calgary Stampeders left the biggest game of the CFL season with the bitter taste of defeat on their mouths.

Frustration and anger dripped off Stampeder quarterback Bo Levi Mitchell like sweat after Calgary lost 39-33 in overtime to the Ottawa REDBLACKS in Sunday’s 104th Grey Cup presented by Shaw. In his mind, the Stampeders didn’t lose, they had the Cup ripped out of their hands.

“I don’t know how we didn’t win,” said Mitchell, named the league’s Most Outstanding Player earlier in the week. “We had it won.

“I was about to celebrate. I thought the game was over.”

Trailing by three points, with 40 second remaining in the game, Calgary had driven to the Ottawa two-yard line. Score a touchdown and the Stampeders would win their second CFL championship in three years.

Facing second-and-goal, head coach Dave Dickenson decided Stampeder backup quarterback Andrew Buckley should try to run the ball around the end. Buckley had scored a touchdown on a similar play earlier in the game. But this time Ottawa defensive back Abdul Kanneh made a shoe-string tackle which resulted in Buckley losing a yard.

“The ball has to be in my hands or (running back Jerome) Messam’s,” said Mitchell. “That’s how I feel.

“It’s not wrong for what he called. It’s a good call. It’s something we have seen in film. We thought it would work. They have a solid D line. It’s not to say, even if we would have handed it off, that we would have got it. At that moment, I thought he game was over.”
Rene Paredes tied the score on a short field goal, forcing the third overtime in Grey Cup history.

On the first series of overtime, Ottawa quarterback Henry Burris, named the game’s most valuable player, connected with Ernest Jackson on an 18-yard touchdown. The Stampeders couldn’t answer.

The Stampeders looked like a team of destiny when they finished the regular season with a 15-2-1 record. They looked invincible whipping the B.C. Lions 42-15 in the West final.

Calgary all but swept the CFL awards with Messam named top Canadian, wide receiver DaVaris Daniels rookie of the year, Derek Dennis outstanding lineman, and Dickenson the coach of the year.

In the end, Calgary will be remembered as a great team that lost the most important game.

“If you don’t win the Grey Cup it doesn’t matter what you did at any point of the season,” said defensive back Josh Bell. “We could have went undefeated (but) when you lose the Grey Cup it means nothing.

“There is only one goal in football, that’s to be a champion.”

It’s the first time in Grey Cup history that a team with seven less wins during the regular season won the championship. Ottawa finished the year 8-9-1. 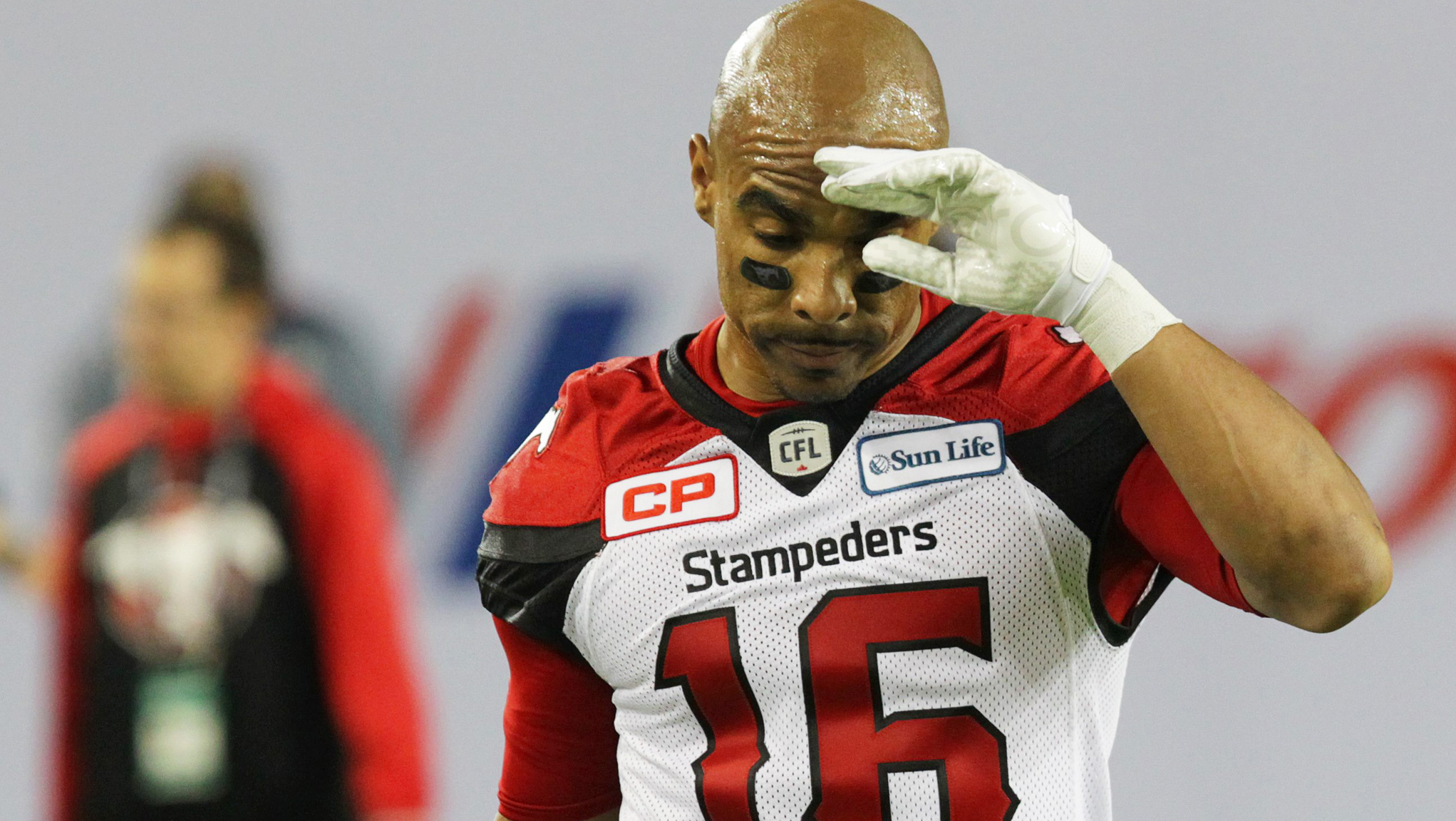 A lot went wrong for Calgary.

Slotback Marquay McDaniel , who had 1,074 receiving yards was injured early. That took away Mitchell’s favourite receiver and his usual safety valve when no one else was open.

Mitchell finished the game completing 28 of 41 passes for 391 yards and two touchdowns.

No team had scored more than nine points against Calgary in the first quarter during the regular season. Ottawa led 10-7 after 15 minutes.

Calgary allowed the least points in the league during the regular season. The Stampeders also gave up an average 15 points a game in their final six before the Grey Cup. They trailed Ottawa 27-7 early in the third quarter.

He was picked off three times by Ottawa.

“Too many mistakes were made, starting with me,” said Mitchell. “Turning the ball over, taking too many shots and it wasn’t there.

“You have to give Ottawa credit. They came out motivated, they came out with more energy than we had. They were competing. We just didn’t execute.”

Calgary went into the game the heavy favourites. All week the Stampeder players said the right things about respecting the REDBLACKS and not taking them lightly.

When it came time to back up their words, the Stampeders came close, managing a huge comeback in one of the most exciting Grey Cups ever. But they still didn’t get the job done.

“I think Ottawa came out with a chip on their shoulder, playing an underdog role,” said Daniels, who finished the night with seven catches for 89 yards and one rushing touchdown.

“They kind of fed off that. They had a lot of juice early.”