One for the Ages: Burris puts a stamp on his legacy

One for the Ages: Burris puts a stamp on his legacy

That’s what you call gutting it out.

Ottawa REDBLACKS quarterback Henry Burris was limping badly as he made his way into the interview room about a half an hour after he’d led his team to a 39-33 overtime victory in the 104th Grey Cup presented by Shaw.

He’d been nicked during warm-ups and was seen limping off the field before the game had even begun. Rumours swirled. The 41-year-old would not have his chance to attempt to lead his team to an upset win. Back-up Trevor Harris was going in. That was going to sting Smilin’ Hank, a fierce competitor who was very much looking forward to getting another chance to show his critics they were wrong.

Burris played, however. Boy howdy, did he ever.

With 461 passing yards, three touchdowns and another two that he lugged in himself, Burris put a “hell, yeah,” kind of stamp on his 17-year career. That performance of his was Flutie-esque, in numbers if not in style.

“Hands down the best one ever,” said Burris when he was asked how his effort stacked up against any other of his performances.

The setback during pre-game was a weird one, Burris said, describing the flukey nature of it all.

“I’m jogging back to the huddle to meet the guys, all of a sudden I felt a crunch-pop and my knee went unstable or buckled on me or something like that,” he said. “When I felt the pop, I couldn’t extend my leg fully and whenever I put pressure on it, it would just let go. When it happened I thought ‘this has to be a fluke thing, let me keep moving’ – but then it continued to do it again and again and again and then I was like, ‘no, please don’t tell me this is happening right now’.”

There were treatments given and Burris’ knee brace was adjusted so that he couldn’t fully extend his leg because that was where and when he was feeling the pain. The doctors gave him some pain killers and Burris told Head Coach Rick Campbell he could go, because his arm was feeling good.

As long as he could get good protection and make quick decisions, he figured he’d be fine.

“I didn’t know for sure if he was going to play,” said Campbell, whose decision to reinstate Burris as the REDBLACKS’ starting quarterback in Week 17 paid off with the ultimate prize. “I trust his judgement, I know him very well and he’s played a long time. We had a discussion that he wasn’t going to put himself in a bad position or the team in a bad position.” 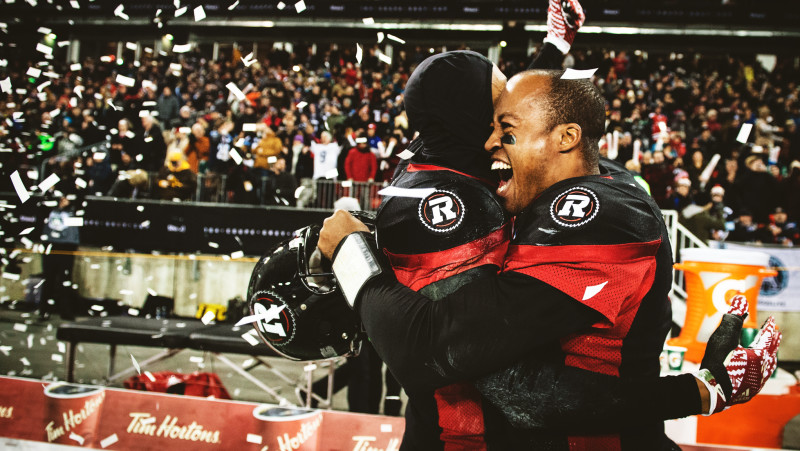 Burris was given terrific offensive line protection most of the night, he made those quick decisions that he talked about and ended up hitting receiver Ernest Jackson with the winning score in overtime, cementing his legacy beyond a shadow of a doubt.

That will please Burris to no end, I’m sure. He’s had a history of taking negative comments to heart and using them for motivation.
However, you get the impression he would like to be done with all that and he was asked if maybe he is.

“I hope so, because really, what else can they say right now? For all the things they say I can’t do and the good Hank, bad Hank, what’s bad in winning a championship with an organization that’s only been in existence for three years?”

Retirement may have to wait. You could be excused for thinking Burris ought to hang ’em up and no longer subject himself to the physical bruising that a quarterback has to take. Seventeen years and now a third Grey Cup Championship to his credit (two as a starter). Pile a maestro-like performance against a prohibitive favourite on top of that and Hank could trade in that black Stetson he sported at the beginning of the week for a white one and ride off into the sunset as a hero.

Not so fast. Burris needs a little time to sort it out.

“Oh man,” he said, mulling over the question of retirement. “I mean, sometimes athletes can get greedy because the 2017 Grey Cup is in Ottawa. Of course I’ve got to get back and look at that checklist, but the chance to win back to back is a pretty sweet thing but I haven’t even thought about that yet.”

So much for the dramatic moment that a few figured we’d be getting. A podium announcement of ‘thanks, I’m heading out for good, folks’.

“Right now, to be able to go and win a championship here in Ottawa is definitely the icing on the cake and the cherry on top,” said Burris, so you know the possibility of a storybook ending is at least on the table.

“But if we can have two cakes with the icing and the cherry on top,” he added, “it would taste even sweeter.”

That’s Henry Burris for you. Wondering if he has more left. If he has more to offer, even after a gargantuan showing.