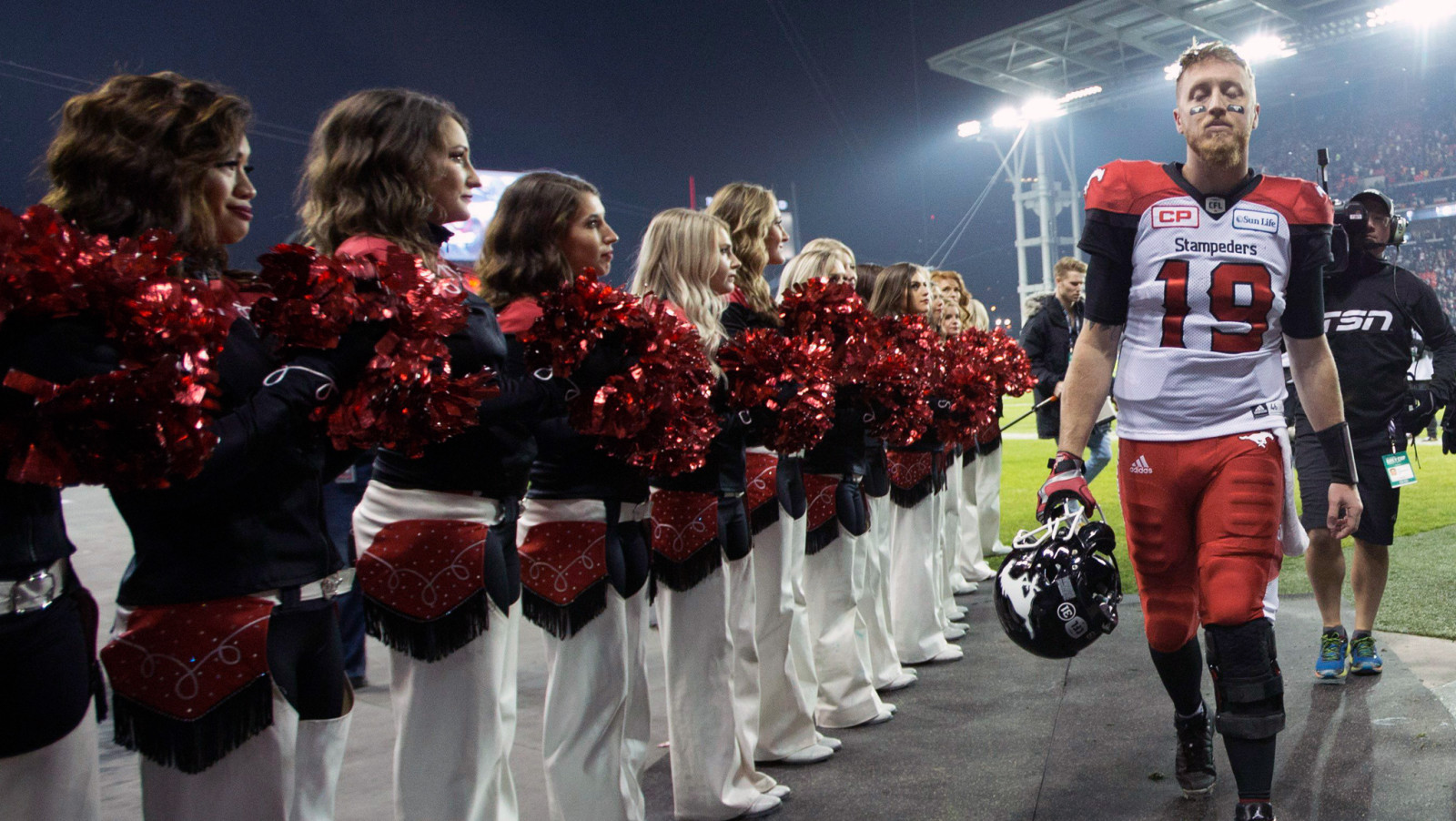 The aftermath of Ottawa’s triumph in the 104th Grey Cup has made it hard to formulate succinct thoughts. So, instead of fighting it, we’ll just roll with it for the final Monday Morning Quarterback of the 2016 season. The REDBLACKS have their first ever Grey Cup while the Calgary Stampeders are still trying to determine what went wrong.

That word above is the very best word to describe Henry Burris on and off the field. Off the field, Ottawa’s quarterback is one of the league’s great ambassadors and has been for more than a decade. On the field, he continues to defy logic and he truly was the class of Sunday’s game. I can’t remember the last time I was this happy for an individual in a team sport.

Burris’s legacy was the topic for the final edition of Berg vs. Ferg this season. The question posed was simple: will this Grey Cup game define his career? My feel was no, because Burris didn’t need to prove anything else. Had Ottawa lost last night, I wouldn’t look any less fondly on Burris’s Hall of Fame career. I won’t lie, though: the fact he won will certainly change how he’s perceived, and for all the right reasons.

To win that second Grey Cup ring as a starter seals the deal for Burris as one of the greatest to ever play in this league. That was never really a question for me, but it was in other circles; I just can’t see how it can be anymore.

What Burris has accomplished the last two seasons with the REDBLACKS is truly remarkable. But what he did in the final game of 2016 truly takes the cake. Burris was as good as he’s ever looked in becoming the first quarterback since Danny McManus in 1996 to throw for 400 or more yards in a Grey Cup game. He was calm under pressure, he was composed when things started to go south and he was steely and calculated in the game’s most crucial moments.

At the age of 41, Burris just authored one of the best quarterback performances in a CFL title game we’ve ever seen. I don’t know if retirement is on the table or not, and I would never think to suggest he should, because the guy can clearly still ball. But if Burris were to say goodbye, he would leave in the most epic of fashions. If that goodbye is still a ways off, that’s cool too…no one can ever take his 104th Grey Cup performance, or ring, away from him.

I went into Sunday thinking the Stampeders were going to have to beat themselves, at least in part, if they were going to lose this game. Calgary was so dominant all season long that I just couldn’t see any team knocking them off if they were firing on all cylinders. Unfortunately for supporters of the Red and White, the Stamps did plenty of shooting themselves in the foot.

Now don’t for a second believe any of this is taking credit away from Ottawa. Head Coach Rick Campbell had his REDBLACKS fired up, dialed in and as prepared as humanly possible for the biggest game in franchise history. Their defensive game plan was on point and, as we mentioned, Burris was in top form all game long.

The fact is, though, the Stamps did hurt themselves too often on Sunday. Sure, Ottawa was responsible for many of Calgary’s mistakes, but the unforced errors are what stick with me. For a team that turned the ball over so little during the regular season, seeing the Stampeders give the ball away like they did at times was somewhat stunning.

Through the Lens: Images of the 104th Grey Cup

I look at two of three interceptions thrown by Bo Levi Mitchell and I’m still baffled. The league’s Most Outstanding Player made some of the worst decisions I’ve ever seen him make in a game where he just didn’t look right. Mitchell overthrew his receiver resulting in an interception not once but twice in this game and both picks came with very little pressure being applied. They were just bad throws, which is just so uncharacteristic.

Additionally, Roy Finch fumbled a kickoff return while Dave Dickenson made a peculiar play call late in the fourth quarter he said he regrets. Unforced errors like these will go down for me as the biggest reason the Stamps lost this football game. It’s amazing they ended up getting this thing to overtime.

Another day at the office

I wonder where Sunday’s thrilling victory ranks in Jon Gott’s career. The REDBLACKS offensive lineman is no stranger to nail-biting, heart-stopping football games, and it turns out he tends to be on the winning side.

For whatever reason, I was thinking about Gott as Sunday’s overtime victory for Ottawa played out in enthralling fashion. If you remember, Gott was a sophomore member of the Boise State Broncos in their 2007 Fiesta Bowl win for the ages over Oklahoma. It’s actually pretty amazing to think how similar that game was to Sunday’s Grey Cup.

In both games, Gott’s team was up fairly convincingly only to see the favoured powerhouse come all the way back to force overtime. And, in both games, Gott’s team only needed one possession in overtime to win. Sure, Ottawa didn’t have a bunch of gadget plays up their sleeve on Sunday, but they still closed out as exciting a season finale as I can remember.

Gott has played in a lot of big games over his career. On top of the 2007 Fiesta Bowl and last night’s thriller, he was on the losing end of Grey Cup teams in 2012 and 2015. Knowing how this season has gone for the REDBLACKS, I have a pretty good feeling yesterday might have climbed right to the top of his very impressive list.

When listening to their post-game comments, the Stampeders seem to be as aware of their missed opportunity at a lasting legacy as everyone else is. Calgary’s 2016 regular season was an historic one with all kinds of league records set, both as a team and for individuals. But they didn’t close it out with a title and that changes how we’ll remember this past season.

I’ve used the example before and I’ll use it again: very few remember the 1989 Edmonton Eskimos the way they probably should be remembered. Instead, 1989 brings to mind Dave Ridgway’s game winning field goal to propel Saskatchewan to a Grey Cup win over Hamilton. It’s harsh but true, and Billy Beane said it best in Moneyball: “no one remembers you if you don’t win the last game of the season.”

I’m not saying the 2016 edition of the Stampeders won’t be remembered. Certainly people in Calgary will likely remember just how dominant they were all season long but will also remember how bad it felt when that final incomplete pass hit the ground in Toronto. It can’t be remembered as a banner season because, well, the Stamps won’t be raising a banner.

I have no doubt Calgary will bounce back and be a force again next season. But the 2016 season gave the Stamps the opportunity to truly cement themselves as one of the great campaigns of all time. Unfortunately, Calgary will likely be remembered similar to teams like the aforementioned 1989 Eskimos or 2007 New England Patriots. They were great, but their season finished with a loss.

I don’t know if Sunday was the last time we’ll ever see Henry Burris in a CFL game, I really don’t. What I do know, though, is that the REDBLACKS are in a good spot at quarterback regardless of what Burris decides. With Trevor Harris waiting in the wings, this team looks set under centre for a long, long time.

Let’s not forget Harris was the story during the first half of Ottawa’s season. Taking over after an early Burris injury, Harris was seldom throwing an incomplete pass until he went down with an injury a few weeks later. Much like 2015 in Toronto, Harris has shown he is ready to be counted on as a true number one quarterback and he played like one this season.