Cauz: Making sense of one of the all-time greatest upsets 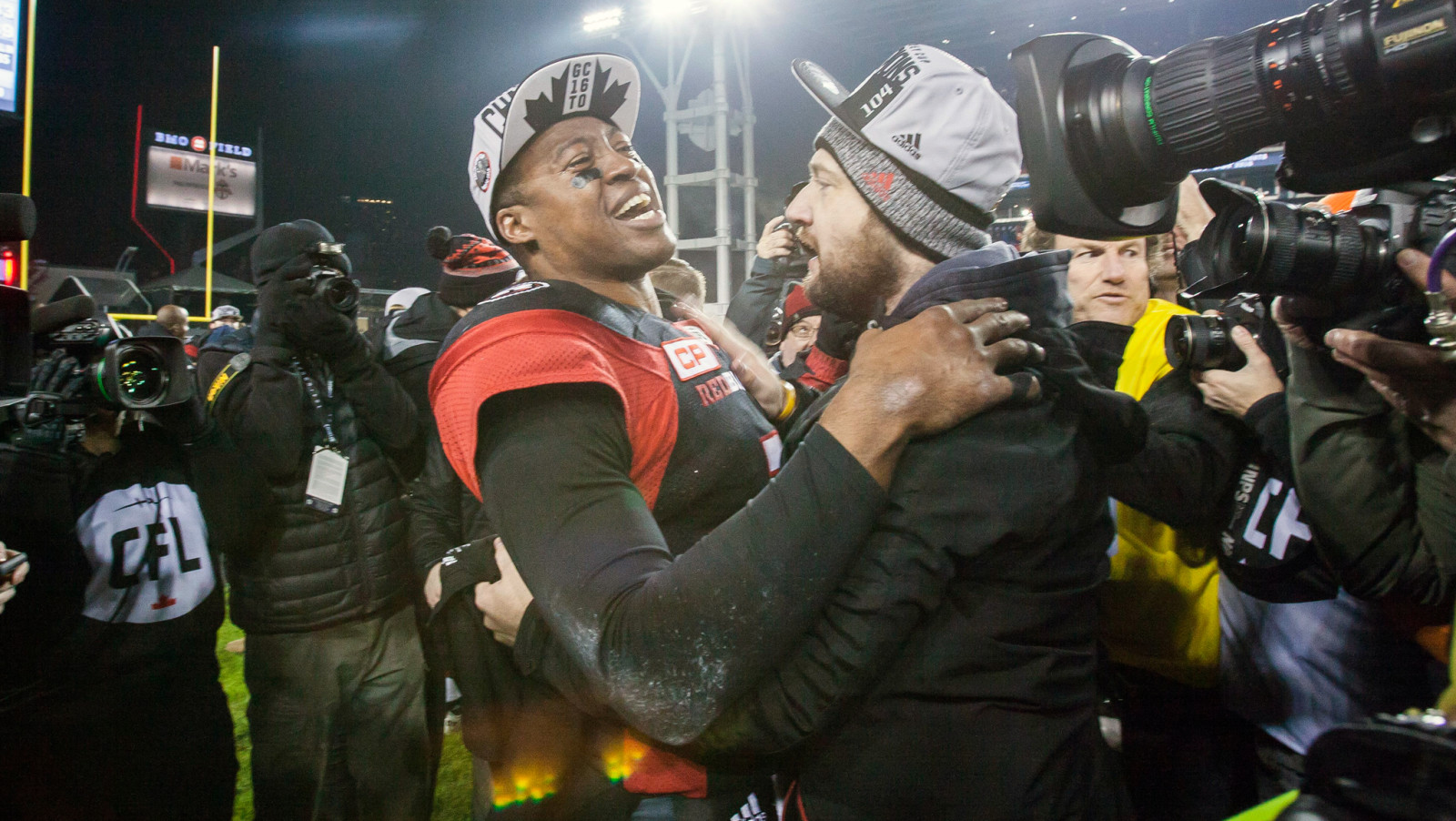 Cauz: Making sense of one of the all-time greatest upsets

Be honest, you were nervous for Henry Burris after that first pass, weren’t you? Considering the final result of the 104th Grey Cup, that opening statement sounds ridiculous, but just remember what was going on about 15 minutes before kickoff. I know that may be hard to do after we all witnessed nearly four hours of back and forth play, a combined 852 passing yards (Grey Cup Record), seven turnovers and too-many-to-count replays and reviews, but the entire football world was wondering if Burris would even play in the game after injuring his knee in warm-ups.

Suddenly the Trevor Harris storyline was in full effect before we saw Burris sprinting onto the field. But after his first pass I bet many people were wondering if we would see Harris on the field after Burris’ initial attempt was that ugly lateral that resulted in an eight-yard loss. It was cringe worthy because suddenly, the idea of a Calgary blowout seemed like a real possibility. In a year in which the East could not produce a team with a winning record, I suddenly saw visions of tomorrow’s headline focusing on how a gimpy Burris could not hold off the Stampeders onslaught.

Wow, I could not have been more wrong. Wow, am I happy that I was completely wrong. That was one of the best Grey Cups I’ve ever seen and I’m so glad it happened here in Toronto. It’s been a tough year for football here at BMO Field; this game is a reminder to the fair weather fans that reside here just how damn good this game is. 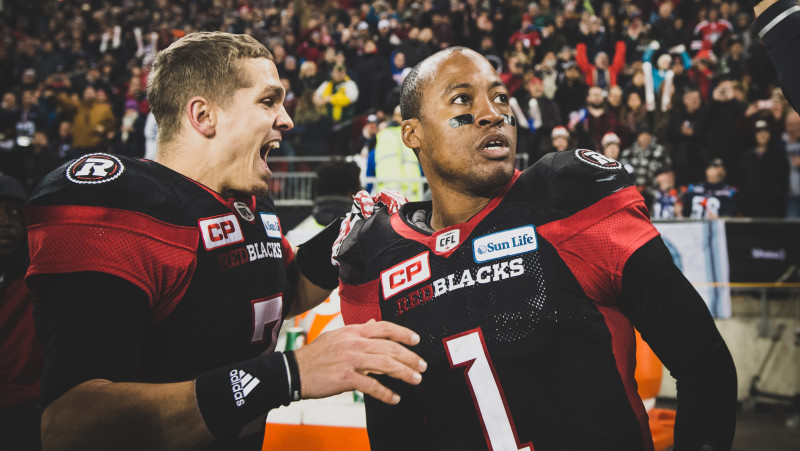 There was one specific moment when you knew that Ottawa had a chance for the massive upset and it had everything to do with Henry Burris. It occurred on Ottawa’s second drive facing second and long when Burris hit Brad Sinopoli on a 13-yard completion converting yet another second down. But it was more than just another conversion — it was the combination of violence and accuracy of that throw. Burris threw an absolute bullet, forcing that ball into a tiny space between two defenders where only Sinopoli could make that catch. Burris had his fastball working; the REDBLACKS had a legitimate chance.

There were other throws, like his 31-yard strike to Sinopoli from his own end zone on second down that kick-started a long drive that led to a field goal as the first half came to an end. If Burris is off the mark, Ottawa likely concedes a safety and the REDBLACKS don’t go into the third quarter with a 20-7 lead. There was his perfect touch on a 38-yard bomb to Juron Criner (hell of a catch by Criner as well) in the fourth quarter, while two plays later Burris’ one-yard plunge would give the home team a 33-23 lead.

Maybe the most impressive part of Ottawa’s upset win was how the REDBLACKS managed to pick themselves up late in the fourth quarter after getting knocked around. It sure looked like Ottawa was in complete control after going up 27-7 to begin the third quarter. Cue the oh so predictable Calgary. On the next three possessions, Ottawa managed two quick punts and a lost fumble and suddenly Calgary had scored 16 straight points to make it a 27-23 game. Calgary looked like it would pull ahead early in the fourth quarter after a Ciante Evans interception. At that point you got the feeling that the REDBLACKS had given everything they could but the inevitable Calgary win was just a couple drives away.

Instead, Taylor Reed and the Ottawa defence forced a quick punt, giving the ball back to Burris who calmly directed yet another touchdown drive to push the lead to 10. Ottawa had to survive another Calgary flurry late in the game. A DaVaris Daniels touchdown run on third down and a successful onside kick had Calgary in position to rip the hearts out of every member of the REDBLACKS. But somehow, Ottawa kept it together on a monumental goal line stand. The REDBLACKS’ execution in overtime was flawless and the next thing you know, BMO field is littered with sobbing Ottawa players as Russ Jackson, the best looking 80-year-old man in the world is smiling from the stands. I mean wow, what a game!

Now for the one second guess. As everyone knows, I deplore when a brilliant/wildly entertaining work of art on the field is reduced to “What the hell was Coach X thinking,” but why did the 2016 AGF Coach of the Year put the ball in the hands of the third string quarterback? You had at your disposal the current MOP in Bo Levi Mitchell who could have thrown the ball to the league’s Most Outstanding rookie in DaVaris Daniels — we all saw his speed at work on that third and one touchdown run earlier in the quarter. Or Coach Dave Dickenson could have played it safe and run the ball with the Most Outstanding Canadian, Jerome Messam, behind left tackle Derek Dennis, who is the league’s Most Outstanding Offensive Lineman. One play earlier, Messam had bullied his way for six yards to the two-yard-line.

Instead of allowing all that star power decide the fate of the Stampeders, Dickenson called for Andrew Buckley to decide whether or not Calgary would be crowned with the title of “Greatest Single Season” in CFL history. I rarely second guess — I’m not in that huddle, I’m not hanging around the team every day in practice. But at the biggest moment in the game, why not give the responsibility of who wins and loses to one of your stars? Really, there isn’t much else to write about that call except to say that Abdul Kanneh deserves a ton of credit for closing in on Buckley as quickly as he did forcing a third down. You have to be happy for Kanneh, who has played his entire career with the REDBLACKS organization.

My final thought on this game is I hope we don’t frame it as ‘Calgary gave this one away because of all its mistakes’. Yes, it’s true, the Stampeders did not resemble the juggernaut that steamrolled through the regular season and then throttled the BC Lions 42-15 in the Western Final. You could see something was amiss when, on their first drive, they committed a time count penalty that would soon lead to a punt; no team had fewer penalties than Calgary. Mitchell won the MOP partially on the fact that he didn’t make many mistakes throwing only eight interceptions — an incredibly low number for a quarterback with 606 pass attempts and 5,385 passing yards. On this night, Mitchell looked shaky throwing deep, ended with three interceptions and was not in sync with his receivers.

However, this game was more about how Ottawa was not afraid, how their receivers constantly made big plays and how their defence would not allow Calgary’s offensive line to dominate. Yes, Calgary made a slew of uncharacteristic mistakes, but it was the other team that helped force some of this errors. In the end, for the REDBLACKS to win they would need two things to happen: they had to win the turnover battle and Burris would have to be near perfect. Both things happened and Ottawa is your 2016 Grey Cup winner. An upset for the ages.