OTTAWA — After weeks of speculation, Henry Burris has made it official: The veteran quarterback of 18 CFL seasons is walking away on top.

Burris, 41, announced his retirement on Tuesday, calling an end to his prolific career nearly two months after quarterbacking the Ottawa REDBLACKS to their first Grey Cup victory.

The future hall of famer exits as the third all-time leading passer in both yards (63,639) and touchdowns (373) in 229 starts. Also next to Burris’ name are three Grey Cup rings, two Grey Cup MVPs and two CFL All-Star nods.

> Top of His Game: This is the only way Henry should exit Football (by Don Landry)
> Burris 1-on-1: Hank Reflects on Career in Exclusive Interview
> Hero to Villain: Examining Burris’ love-hate relationship with Riderville (by Jamie Nye)
> The Calgary Years: Burris lifted Stamps on and off the field (by Pat Steinberg)
> Hank restores Tabbies in short order (by Marshall Ferguson)
> A who’s who of Henry Burris pass-catchers (by Jim Morris)
> Burris by the Numbers: A look back at a stellar career

Fans have anticipated Burris’ decision ever since Ottawa’s 39-33 upset of the Calgary Stampeders in the 104th Grey Cup. On that night in Toronto, Burris overcame a knee injury during warm-ups to throw for 461 yards — the fourth-highest passing total for a quarterback ever in a championship.

In a game that’ll go down in Grey Cup lore, Burris became the oldest quarterback to win a Grey Cup while also leading Ottawa to its first professional football championship in 40 years.

For Burris, a chance to close his career with the perfect chapter was too good to pass up.

“Right now, you can’t write a better script,” Burris said in an exclusive one-on-one with CFL.ca’s Marshall Ferguson. “For what we’ve been able to accomplish here, especially everything that I went through this past year . . . people had written us off and we were able to pull things together.

The last two seasons put an exclamation point on Burris’ career. Yet for all he accomplished in the nation’s capital, Henry Burris’ name resonates with fans in every Canadian Football League city.

Burris entered the league in 1997, joining the Calgary Stampeders’ practice roster after going undrafted in the National Football League. A few years later, in 2000, he became a starter for the Saskatchewan Roughriders, throwing for 4,647  yards and 30 touchdowns in 16 starts.

Henry Burris: A journey through his career

It wasn’t until 2005 that Burris, then just a young gunslinger, became the polarizing figure fans either loved or loved to hate. One year after returning from a stint down south, Burris became a free agent, spurning the Riders for the rival Stampeders.

Four years after winning a Grey Cup in 2008, the Stampeders moved on from Burris, trading him to Hamilton in 2012 to make way for up-and-comer Drew Tate. Two years later, the Ticats released Burris to give the reins to another young one on the rise, Zach Collaros.

The Spiro, Okla. proudly wore a chip on his shoulder, joining the expansion REDBLACKS and leading them from a disappointing two-win season in 2014 to back-to-back East Division titles after that. Burris led the CFL in passing yards in 2015, capturing his second Most Outstanding Player award and quarterbacking his team to an appearance in the 103rd Grey Cup Championship.

The following year, after confronting his critics during a live halftime interview with TSN, Burris lost his starting job to Trevor Harris before, weeks later, winning it back. The rest is history, the 8-9-1 REDBLACKS defeating Edmonton in the Eastern Final before winning one of the greatest Grey Cups of all-time over Burris’ former team, the Calgary Stampeders.

“It feels pretty special to be able to win one and to go out in this fashion.” 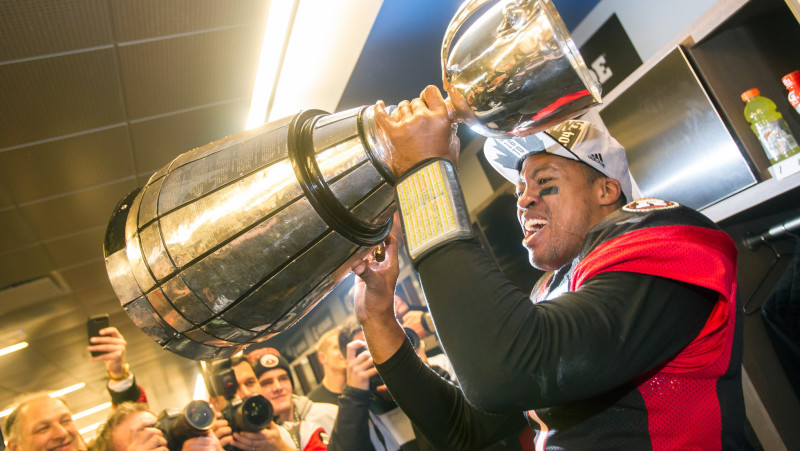 On the other hand, the numbers alone paint an incomplete picture. In the end, Burris’ legacy will be remembered for his character off the field just as much as on it.

“I want to congratulate Henry Burris on a prolific 18-season CFL career with the Calgary Stampeders, the Saskatchewan Roughriders, the Hamilton Tiger-Cats, and the Ottawa REDBLACKS,” said Commissioner Jeffrey L. Orridge in a statement.

“Henry is a three-time Grey Cup champion and was a force on the field, where he made an unforgettable impact on our game. He has also left an indelible impression in the hearts of fans across the country, especially those in the communities he called home.

“He embodies the values of leadership and service on the field and off, which has made him a role model to us all. We are proud to have had a player of his calibre and a man of his character as a star in our league.”

Always a winner off it, one of the all-time greats has hung up his cleats for good. For Burris, the ending can’t be beat.

“It feels pretty special to be able to win one and to go out in this fashion,” Burris told Ferguson. “Not many players have ever had a chance to go out on top and for me, with all the opportunities I had on the table — with winning a Grey Cup and bringing it back here to Ottawa and having a chance to stay here and get a career going in Ottawa — that definitely helped me come to this conclusion.

“To me, this one had a Hollywood script attached to it.”