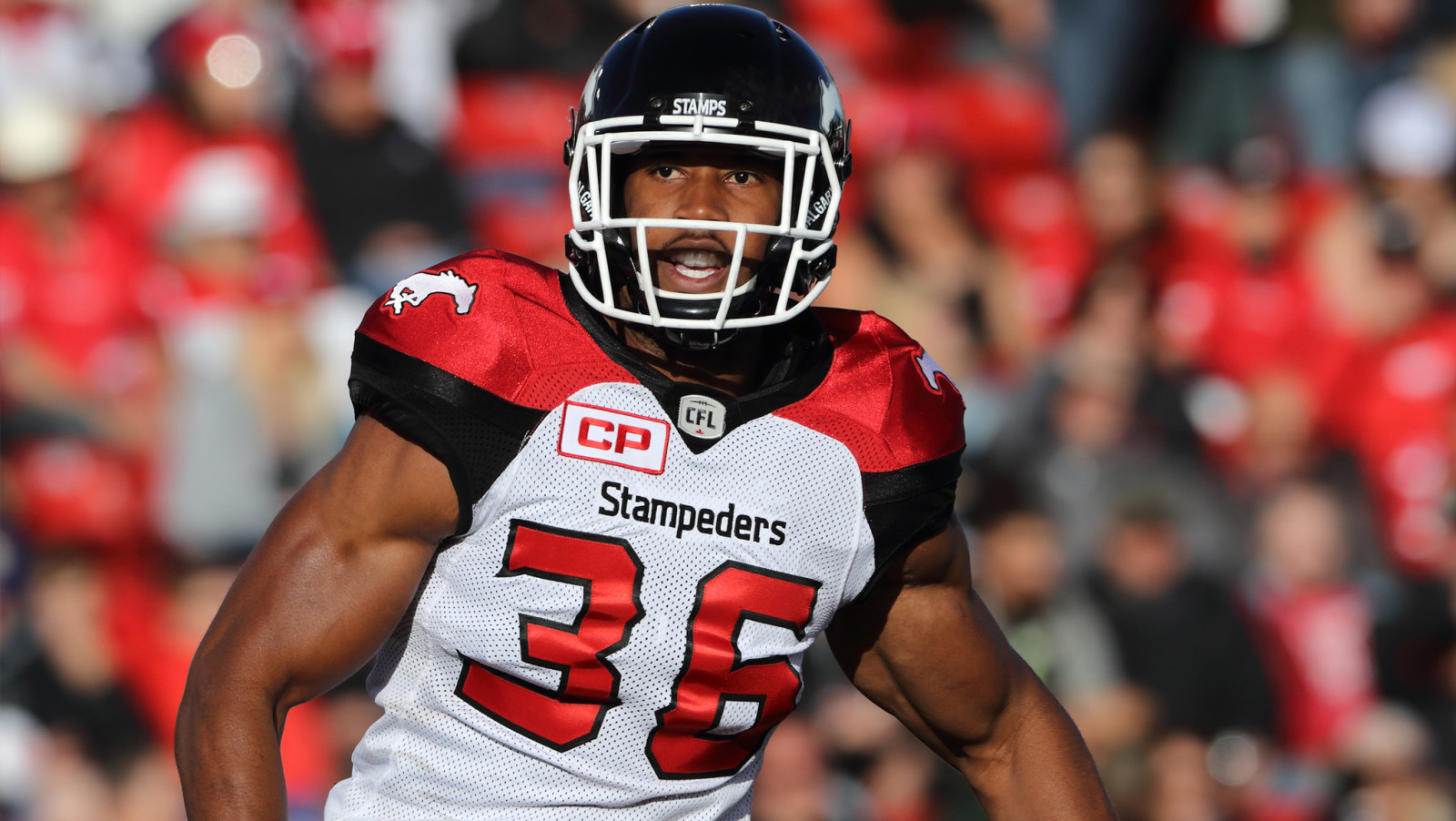 TORONTO — CFL.ca has you covered with all the latest chatter and rumours regarding free agency from CFL.ca writers, players and FA insiders.

The Free Agent deadline was Feb. 14 at Noon ET – to see a full list of those still on the market, click here.

:: Dyakowski, Fuller headed to Argos: According to Gary Lawless, the Argos have signed Jeff Fuller and Peter Dyakowski on the third day of free agency

:: Sinkfield thinking Ticats? It appears that it’s the NFL or the Ticats for free agent receiver Terrell Sinkfield, who tweeted as much on Wednesday night

:: Jackson decision looming?: One of the top free agents has yet to make a decision but is toying with a few offers according to TSN’s Gary Lawless.

DB Matt Bucknor has agreed in principal to a 2-year deal with #BCLions. Final details being ironed out, but he’ll be in BC. #CFLFA

:: Muamba gaining interest from a pair of teams: Veteran safety Cauchy Muamba has been in touch with the Riders and als according to Lawless.

Chris Williams has agreed to terms with #BCLions pending a physical. 2 year deal with a sizeable increase in year 2. #CFLFA @CFLonTSN

:: Riders looking for love? According to Scott Mitchell, the Riders are currently courting linebacker Glenn Love

Sask #Riders are in on Stamps LB Glenn Love, per source. Third in the #CFL with 21 tackles on teams last year.

:: Hunt close to staying put: TSN’s Ryan Rishaug reports that Phillip Hunt is close to an extension with the Esks

Eskimos are close to signing Phillip Hunt, who wanted to test the market, but seems to have settled on staying put.

:: Argos make a move, bring in Venable: The Toronto Argonauts have made their first significant move of the day, inking former Montreal linebacker Winston Venable according to Gary Lawless

:: Als close to adding Westerman? Jabar Westerman is reportedly nearing a deal with Montreal according to TSN’s Farhan Lalji

:: Spencer, REDBLACKS close to a deal: Could Diontae Spencer be about to join Kenny Shaw in the nation’s capital?

:: Munoz released: Not long after reportedly signing Khalil Bass, is Damaso Munoz on his way out of Ottawa?

:: Sink back in the Hammer? According to Drew Edwards, the Ticats are still looking to strike a deal with Terrell Sinkfield

:: Adams on the outs? According to Herb Zurkowsky, Vernon Adams Jr. could be on his way out of Montreal

:: Argos adding to huddle? The Argos may be adding a new quarterback to their huddle in Jeff Mathews

:: Riders get their tackle: It appears the Riders have landed one of free agency’s biggest fish, left tackle Derek Dennis

:: Shaw to the nation’s capital: Word out of Ottawa is Kenny Shaw has landed a deal with the Ottawa REDBLACKS

#Riders have a serious offer in on J’Michael Deane. #CFL via @garylawless

:: Bombers, Nevis come to terms: According to Dave Naylor, the Bombers have inked defensive tackle Drake Nevis to a free agent deal

DL Drake Nevis has agreed to a deal with the Winnipeg Blue Bombers. #CFL #Bombers

:: REDBLACKS come to terms with Khalil Bass: The Ottawa REDBLACKS have reportedly agreed to a deal with linebacker Khalil Bass

:: Stubler lending a hand for Argos: Rich Stubler is offering his help in the Argos’ free agent war room according to Scott Mitchell

:: Shaw, Als in talks? The Alouettes are reportedly in talks with receiver Kenny Shaw, according to TSN’s Joey Alfieri

Source tells me #AlsMTL are in on WR Kenny Shaw. No deal done, but they’re interested

:: Spencer, Jefferson and LaFrance getting attention: According to Matthew Scianitti, Diontae Spencer, AJ Jefferson and Kienan Lafrance have all been popular early in free agency

:: Bombers in pursuit of Nevis: The Bombers could look to fill a void on their D-line by chasing Drake Nevis, says Gary Lawless

:: Shaw will find out what he is worth: Gary Lawless stating that it is unlikely the Argos will have a last minute deal with Shaw done.

:: Bell, Bailey likely to test free agency: It appears that Devon Bailey and Shakir Bell will be heading to market at the 12 p.m. ET deadline

Bailey and S. Bell most likely headed to market and moving on. Expect a subtle approach from Hervey with Hunt situation as a priority

:: Fantuz with offer on table from ‘Cats?: A pair of TSN reporters are s reporting that Andy Fantuz has an opportunity to remain in Hamilton despite recovering from an ACL injury.

#CFL sources say #Ticats made WR Andy Fantuz a firm offer before #CFLFA, but Fantuz reps could explore options after 12pm before committing

told @Ticats making WR Andy Fantuz an offer to keep him in Ham. ACL surgery will keep him off field for long stretch but they want him #cfl

:: Brooks reportedly inks two-year deal: According to Farhan Lalji, Mic’hael Brooks has agreed to a new two-year deal with the Lions on the eve of free agency

:: REDBLACKS, MacMillan come to terms: According to Justin Dunk of 3downnation, Nolan MacMillan has re-upped with the REDBLACKS

:: Iiannuzi also staying put? More news out of Vancouver as Marco Iannuzzi has also reportedly extended his stay with the BC Lions

Ianuzzi is 2 year deal and Yell is 1 year deal. #BCLions

:: Talks break down between Bombers, Denmark: Despite a promising outlook yesterday, seems as though Clarence Denmark will not be retained by the Blue Bombers before the deadline.

Doesn’t look like @Wpg_BlueBombers and WR Clarence Denmark will get a deal before FA opens. Got close but fell apart due to structure #cfl

Expect the Argos to make a significant offer to Derek Dennis tomorrow. They’ve spent a lot on O-line already, but they’re not done. #CFL

:: No new discussions between Argos, Ray: According to TSN’s Matthew Scianitti, there’s been no word between the Argos and veteran quarterback Ricky Ray, who could retire this off-season

#CFL sources say no discussions between #Argos & Ricky Ray about his future. Wait&see approach for team&QB. New GM&HC will determine a lot

:: Ojo could be a non-factor in free agency: According to Scott Mitchell, John Ojo should be cleared to play in six weeks, then has at least eight NFL workouts planned

CB John Ojo should have his Achilles cleared in about 6 weeks and has at least 8 NFL workouts, per source. Non-factor in #CFL FA right now.

:: Talks intensify between REDBLACKS, MacMillan: The REDBLACKS’ star O-lineman might not be headed to free agency after all, as Gary Lawless reports that talks are picking up between the two sides

Sounds like there’s been a break in negotiations with @REDBLACKS and OL Nolan McMillan. Not done but they’re getting close #cfl @cfl

With @REDBLACKS putting dollars into McMillan, sounds like they won’t have cap space for WR Ernest Jackson @cfl #cfl

:: Davis will be sought after when FA opens: Chances are slim that Emanuel Davis will re-sign in Hamilton, this according to Matt Scianitti.  The TSN correspondent reports the same for Ottawa RB Kienan LaFrance

:: McDaniel, Stampeders nearing new deal?: According to TSN’s Gary Lawless, veteran receiver Marquay McDaniel will be staying in Calgary and is working on talks with the Stamps.

:: McDaniel signing could make Grant expendable: According to Danny Austin, should McDaniel re-sign in Calgary expect Bakari Grant’s tenure with the Stamps to end after one season.

Hufnagel says he could only afford one of Bakari Grant and Marquay McDaniel, has informed Grant’s agent there will no longer be negotiations

:: Shaw has offer on the table from Argos: Lawless also reporting that the Argos are actively trying to get a deal done with WR Kenny Shaw before the deadline tomorrow.

WR Kenny Shaw has an offer from @TorontoArgos and is mulling it over. Still some time left to get it done @cfl #cfl

:: Whitaker, Greenwood out of Toronto?: Lawless reporting that RB Brandon Whitaker has been told he will not return to Toronto, while national linebacker Cory Greenwood will likely test free agency before deciding whether he will stay or go.

Hearing @TorontoArgos have told RB Brandon Whitaker they won’t be bringing him back. Looks like LB Cory Greenwood will hit market #cfl @cfl

:: Clarence Denmark still in talks: With one day left before free agency, the Stamps are still trying to work out a deal with defensive lineman Micah Johnson while the same goes for Clarence Denmark and the Bombers

:: Johnson bids farewell to Montreal? Is Jovon Johnson saying goodbye to the City of Montreal? The Alouette defensive back and pending free agent tweeted his thank yous and reflected on his experiences on Sunday

Montreal it’s been a great year! The city has been nothing less than amazing, but with two days to go I just want to say THANK YOU! #Deuce

:: Talks continue between Hebert, Bede and Alouettes: Veteran linebacker Kyries Hebert and the Alouettes are reportedly optimistic that they can come to an agreement, according to Gary Lawless of TSN. Lawless is reporting a similar situation regarding kicker Boris Bede

hearing talks between @MTLAlouettes and LB Kyries Hebert moving in a positive direction. Optimism deal can be reached before FA #cfl @cfl

:: Bombers trying not to let Denmark slip again?: Gary Lawless is reporting that talks between veteran receiver Clarence Denmark and the Winnipeg Blue Bombers have began to heat up.

can say talks between @Wpg_BlueBombers and WR Clarence Denmark have intensified. Sounds like there’s a will to get a deal done #cfl @cfl

told @Wpg_BlueBombers love how Denmark handled himself, came & played after previous release left mark on organization. they want him back 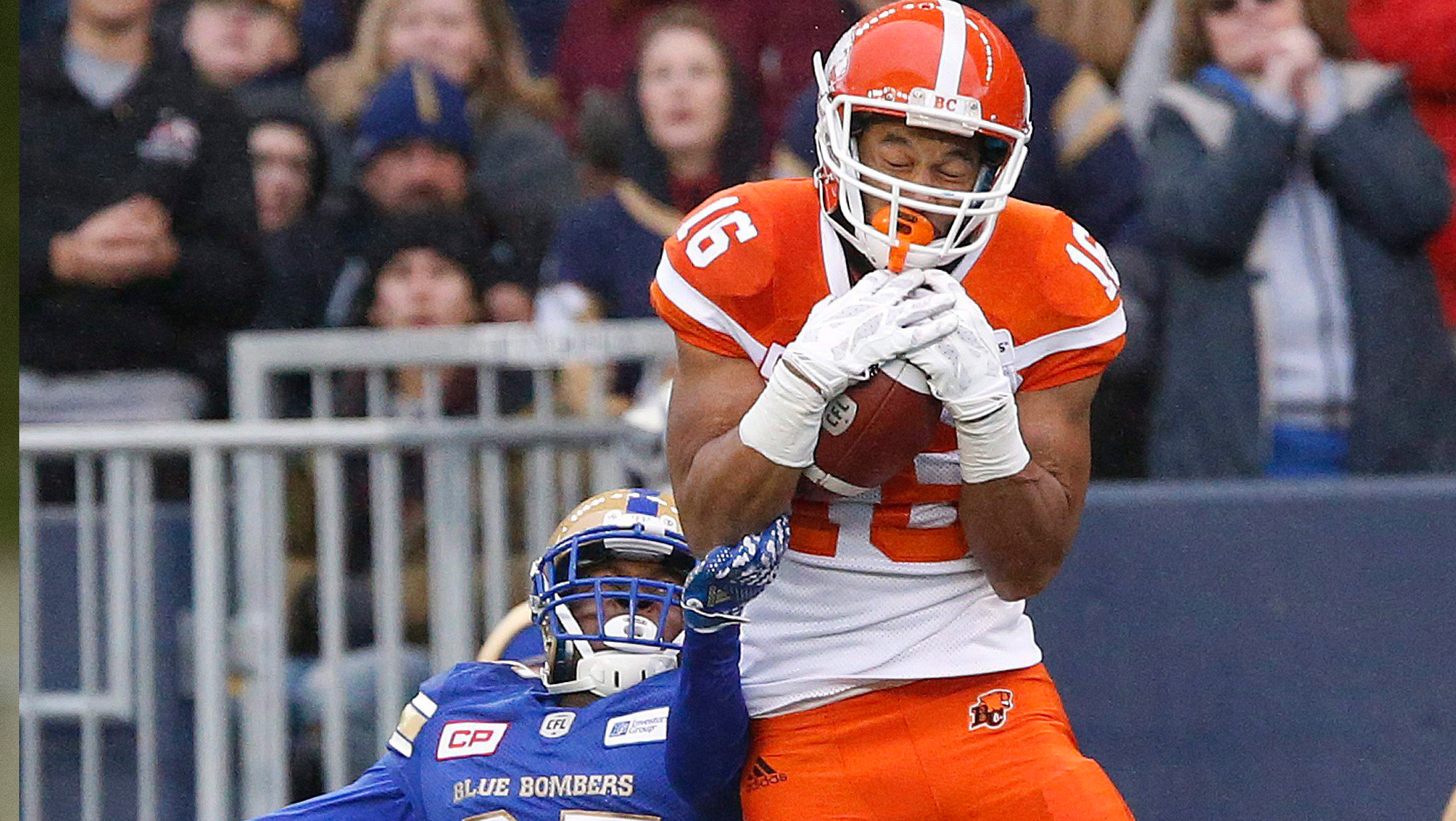 :: Burnham, Lions come to terms?: Farhan Lalji is reporting that the Lions and receiver Bryan Burnham have a new two-year deal in place.

It appears that Bryan Burnham has agreed to a deal with the #BCLions. Neither side has confirmed it yet, but it’s a 2-year deal. #CFLFA

:: Bombers to let Bass, Keeping, others test waters?: Looks like a list of veterans as well as signings from last year’s free agency period will not be Blue Bombers come Tuesday, according to Darrin Bauming.

:: Jackson and more not likely to sign in Ottawa before deadline: Word out of Ottawa is the REDBLACKS are unlikely to sign any of their remaining pending free agents before Feb. 14 (Tim Baines, Ottawa Sun). 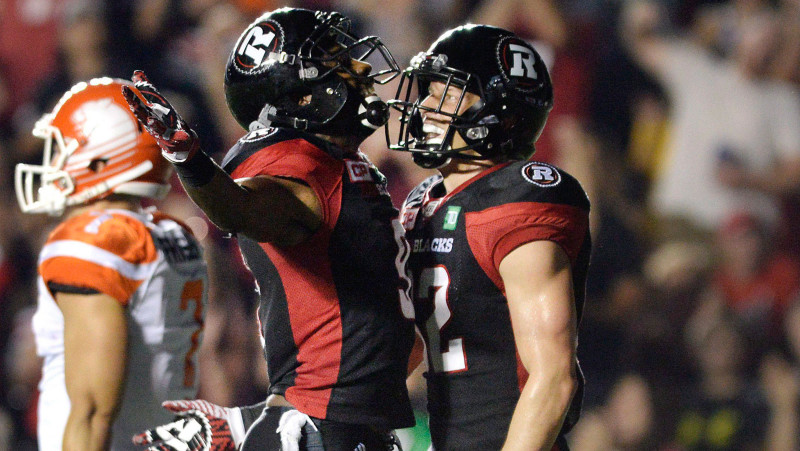 :: Stamps still trying to re-up Johnson; Dennis could hit market: Defensive lineman Micah Johnson remains a priority for the Stampeders according to TSN’s Gary Lawless.  The same cannot be said for the league’s Most Outstanding Lineman, Derek Dennis, who looks set to hit the market.

:: Likely no repeat performance from Bombers: Kyle Walters stole the show last year in free agency but don’t expect him to duplicate the effort in 2017.  After spending significant money on re-signing QB Matt Nichols and WR Darvin Adams and inking playmaker WR Kenny Stafford, Winnipeg could be significantly more quiet this time around. 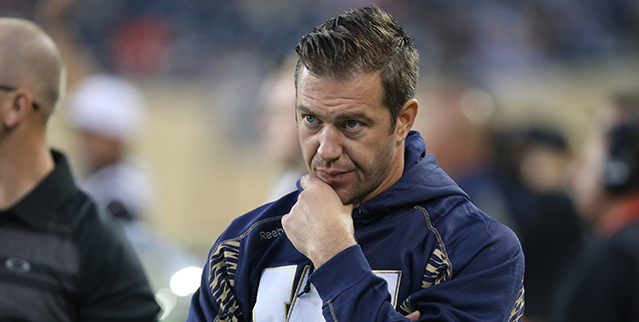