More to the CFL Combine than meets the eye 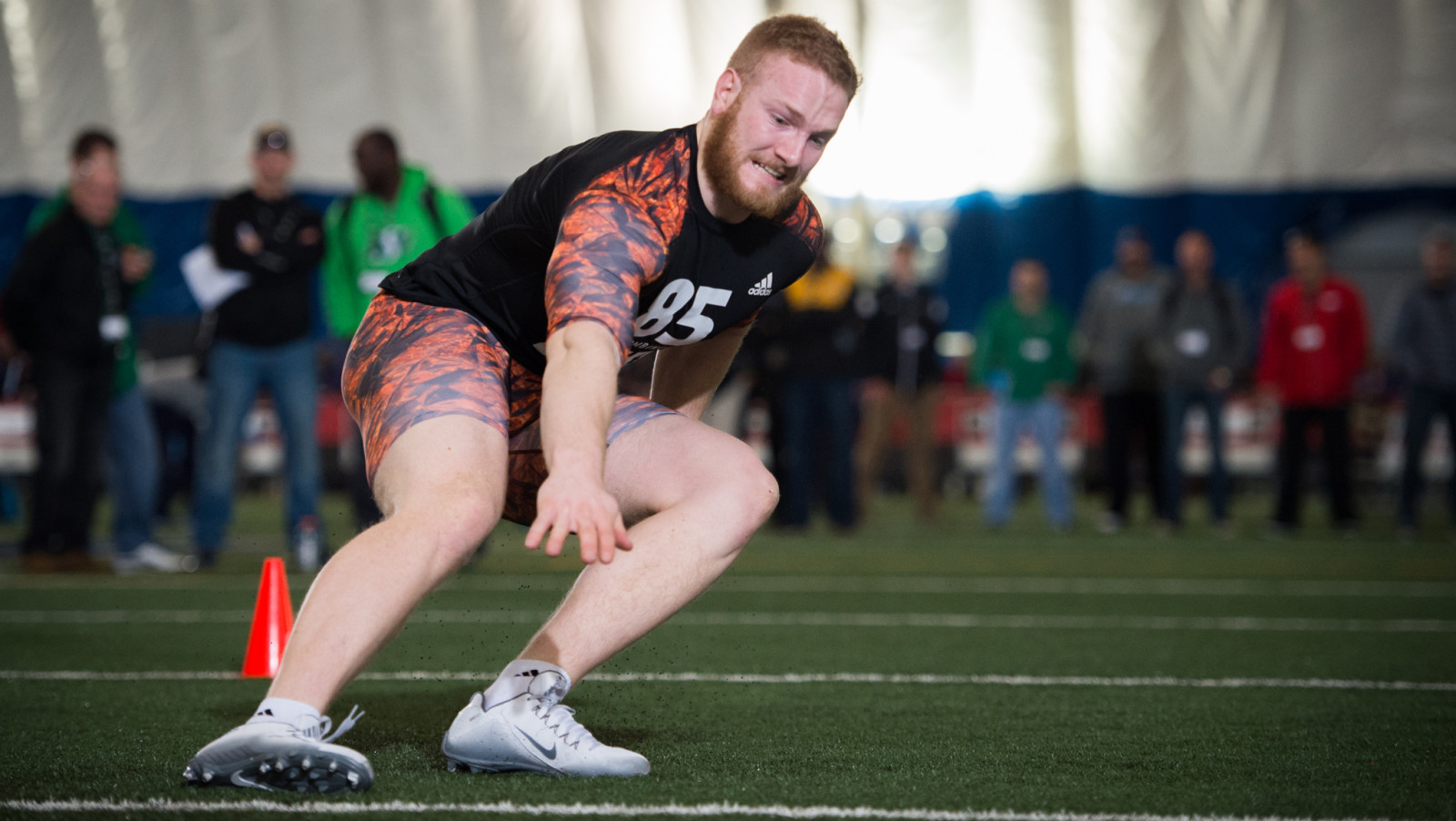 More to the CFL Combine than meets the eye

When the top prospects from across the country come together to compete in the CFL Combine presented by adidas next week, all of their physical preparation won’t matter if they don’t work just as hard on getting in the right mindset before the big day.

“The date has been defined for quite some time and mentally you have to get your head wrapped around that,” said Toronto Argonauts receiver Brian Jones, who participated in the 2016 combine. “As much as people hype up the physical part and how physically straining it is, it’s also very mentally exhausting as well.

“You’re looking at a date on the calendar, you have that date circled for so long and you’re prepping and grinding every week just for this one day. (It’s) either a make it or break it kind of deal.”

The combine is the last opportunity for players to prove their worth ahead of the 2017 CFL Draft. They’ll compete in tests to showcase their athletic abilities, like the 40-yard dash, bench press and vertical jump, as well as one-on-one drills. Each player also goes through an interview process with any team that may be interested in drafting them, giving the coaches, scouts and general managers a better sense of who they are off the field.

Jones, who started his training for the combine last year as soon as he finished up his final season with Acadia, was one of the top performers at the event in Toronto, finishing in the top five of three events. That performance helped catapult the 22-year-old up the draft rankings and he was selected fourth overall by the Toronto Argonauts.

The 40-yard dash – where prospects sprint 40 yards from a stationary position – showcases a player’s quickness and speed. Jones’ training for the drill, that included sessions with a track coach and a strength and conditioning coach, helped the receiver to a 4.69 time and as he explains, that training is important because the drill is about more than just running fast.

“With the 40, you work a lot on your starts because they say that the first 20 meters or so is mostly technique and the rest is just run,” Jones said of how to prepare for the dash. “You kind of use everything you’ve built up in your strength and conditioning but there’s also a lot of technical aspects.”

Winnipeg Blue Bombers safety Taylor Loffler, who also attended the 2016 combine in Toronto, put himself on the map during the one-on-one drills – drills that see defensive backs paired with receivers, running backs taking on linebackers and offensive and defensive linemen going head-to-head.

Loffler made a spectacular interception in his one-on-one last year – a drill that he says is hard to prepare for. The 24-year-old then went on to be drafted by the Bombers in the third round, 19th overall and quickly became one of the premier safeties in the league in his rookie season. 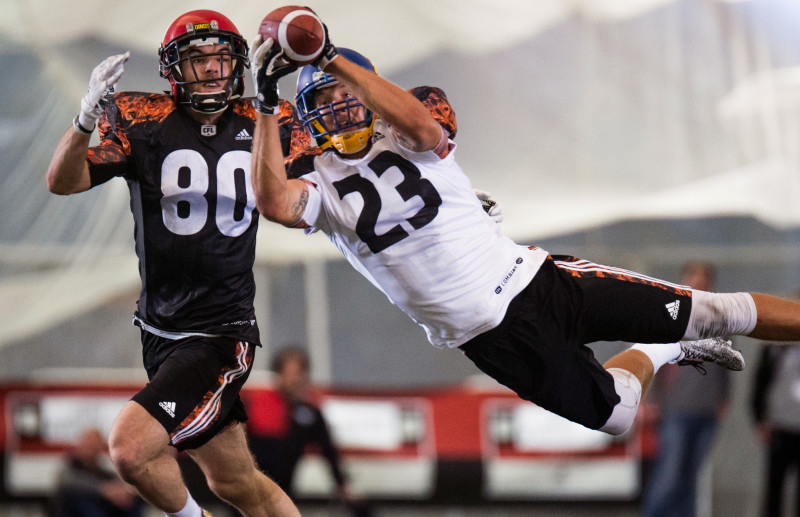 “It’s pretty much you get up there and cover a man. You don’t really have time to study them,” Loffler, a defensive back, said of the receivers he was matched against. “At that point you just have to go up and do what you can and use your skills and show everyone what you’ve got.”

Even with knowing who will be attending the combine well ahead of the event – invitees are announced a few weeks before – Jones says spending too much time studying who he could potentially be paired up against in the one-on-ones isn’t where a prospect’s energy should be focused.

“You obviously recognize some of the names nationally,” said Jones. “But for me, I don’t try to get too hyped up on who I’m going against. It was just kind of, ‘go with the flow’ because there’s going to be a lot of good players there but you can’t mentally psych yourself out around one guy because if you get out of your head in one-on-ones, it’s not a good thing. At the end of the day you’re the one that controls the pace, not your defensive player.”

A prospect’s athleticism is put on full display during the combine – questions like who can run the fastest and who is the slowest, who can bench the most and who can jump the highest are all answered when the final day of the event comes to a close.

But what the coaches and general managers can’t get from watching each and every drill is who the players are when they step away from the field.

If prospects didn’t think of the combine as a job interview before, they will after they take part in the interviewing process.

Teams bring a panel of personnel – that can include head coaches, defensive coordinators, offensive coordinators, general managers and anything in between – to a room where they sit down with a player they want to get to know a bit better. Any question about anything is fair game to be asked during the process.

Sound nerve-racking? You bet it is.

“You have 10 plus people in a room staring at you trying to ask you questions,” Jones recalled. “(They’re) trying to get under your skin about things that maybe have happened in the past or if you have shortcomings of any sort, they want to figure out what kind of person you are.”

Jones is certain the Argos “went easy” on him during his interview with Toronto – the Argos did draft him that season after all. Former Argos’ head coach Scott Milanovich was running the show and after hearing stories about how stressful the process could be Jones was pleasantly surprised by what he actually experienced.

“I would always bring myself to a very professional state before I go to the interviews,” said Jones. “And he (Milanovich) lightened the air and said, ‘I think you’re a great player and I think you can really play at the next level.’”

BRIAN JONES AND TAYLOR LOFFLER 2016 COMBINE BY THE NUMBERS

Most of the questions asked were football related for Jones and Loffler, neither experienced any inquires that may have been tricky in an attempt to throw them off. Loffler was asked in almost every interview he was in about his injuries – he suffered two ACL injuries to the same knee and labral repairs on either side of his hips – but nothing unusual came up.

“I didn’t really have any really weird questions,” Loffler said of his interviews. “I heard some questions that other guys got asked that were kind of strange but for me personally, I had mostly football related questions.”

Some of those bizarre questions included asking prospects what they thought they would run in the 40-yard dash or if they were willing to move away from home if they were drafted by a team out West like Winnipeg, for example.

But perhaps the most interesting question happened to a prospect that told Jones of a problem he had experienced.

Skill and preparation, physical and mental, is essential for success at the combine as the prospects head into what could be the defining moment of their career and as Loffler says, it’s crucial just to stay cool.

“Overall, you just have to stay relaxed, that’s the biggest thing,” he said. “You can’t really get tied up in your own head or else that’s when you make mistakes.”