REGINA — The Canadian Football League’s rules committee is proposing changing some rules and procedures around coaches’ challenges to improve the flow of the game and improve the fan experience.

“These measures would, in some instances, speed up when a coach issues a challenge, alter what he can challenge, and ensure more video reviews occur during commercial timeouts instead of on top of them,” said Glen Johnson, senior vice-president of football for the CFL and chair of the league’s rules committee.

“Finding the right balance between using technology to help officiate the game and protecting the flow of the game is a challenge facing all sports and leagues including the CFL. We are tackling that challenge with the best possible fan experience, in stadium and on broadcast, as a top priority.”

Specifically, a coach would no longer be allowed to challenge a play following a TV commercial timeout.

If the change is approved, a coach would have to throw his challenge flag within the first 30 seconds of the TV break.

Currently, where there is a TV timeout on the field, a coach can wait the entire duration of a break before deciding to challenge, as long as he does so before the next snap. The result can be a two-minute commercial break followed by a 90 second challenge, hampering the flow of the game. 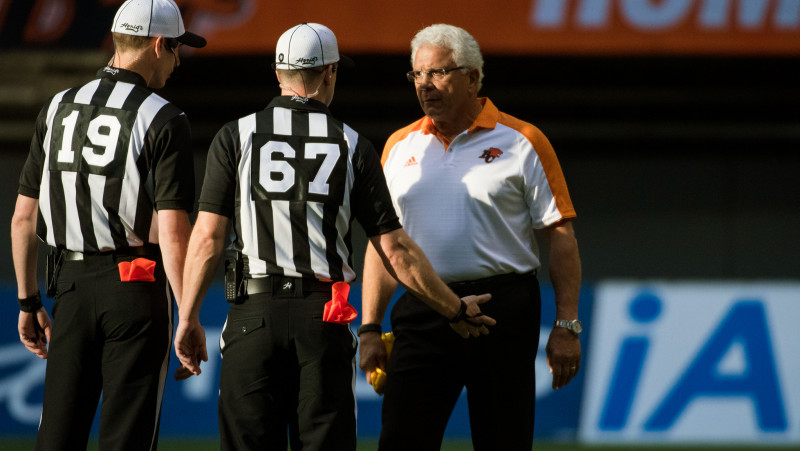 The proposed rule changes will go before the CFL Board of Governors for approval (Jimmy Jeong/CFL.ca)

The committee is also suggesting limiting the types of actions challengeable under Roughing the Passer to the pure definition of Rule 7.2.4. on page 56 of the CFL Rulebook, which applies to when a quarterback is in the act of passing or potentially passing the ball, and when the quarterback slides feet-first across the line of scrimmage.

Other unnecessary roughness penalties that may occur against the passer behind the line of scrimmage, such as grabbing the facemask or horse collar tackles, would no longer be challengeable.

The committee believes this will reduce the number of challenges while still ensuring the quarterback is protected when in the act of passing or potentially passing he ball, the original intent of making roughing the passer reviewable.

It is also recommending retaining a rule change made at midseason least year, which put a timeout at risk for every coach challenge that is incorrect. The committee is also proposing that the replay official only a change a call where there is clear and indisputable evidence that it is wrong, rather than attempt to officiate plays to ensure they are correct.

Members believe these two combined measures, in place for a full season, will discourage coaches from using their challenges, especially as they put timeouts at risk. They estimate this can reduce the number of challenges by 20% or more while still allowing coaches to challenge big plays that have a material impact on the game.

Finally, TSN will go to commercial on every challenge it can. It’s estimated that 80% of challenges will now be done during a commercial, up from 20% last season. That will significantly reduce unnecessary stoppages in the game and improve the fan experience both in stadium and on broadcast.

The committee has also recommended increasing the duties of the video official in the Command Centre so they can correct errors when:

To further promote player safety, the committee wants to change all 10-yard illegal low block penalties to 15-yard unnecessary roughness penalties. The committee recognized the importance of signaling that such dangerous blocks have no place in the game.

The committee wants to prevent the return team on a kicking play from putting a player on the field a split second prior to the snap and trying to hide him so he can receive a lateral pass from the kick returner.

This sort of “sleeper play” would be subject to a 10-yard penalty.

All rules committee recommendations must be reviewed by the league’s competition committee and ultimately approved by its Board of Governors before they go into effect.