REGINA — Jean-Simon Roy made the headlines on Friday at the CFL Combine presented by adidas but Tunde Adeleke might have had the most to gain.

CFL.ca’s Marshall Ferguson named the Carleton defensive back his star of the combine for Friday after a strong showing in the weekend’s first events. A 5-foot-10, 190-pound defensive back, Adeleke put up 16 reps on the bench, leaped a 9-foot, 5.25-inch broad jump and a 32-inch vertical.

Laval’s offensive lineman Roy had Evraz Place rocking, putting up 39 reps on the bench — the sixth-highest ever at the CFL Combine. He’s Ferguson’s second star for the day.

Rounding out Ferguson’s selections is another Carleton product in Behar. The former Raven put up 22 reps on the bench press, a strong mark for one of the upcoming draft’s most highly-regarded receivers. 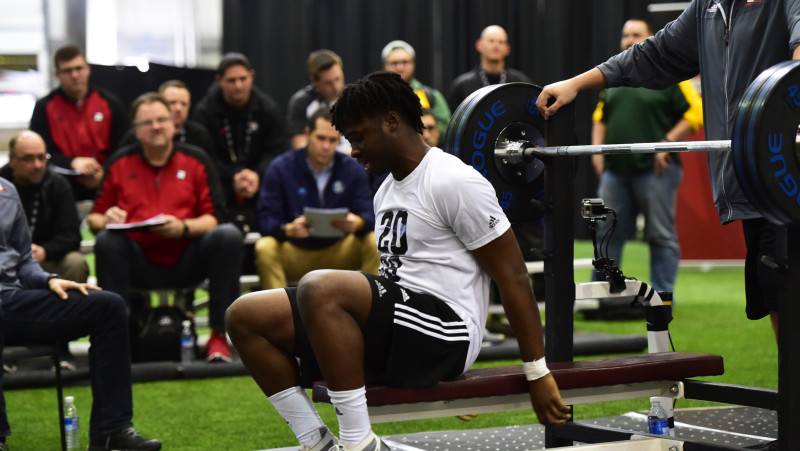 Tunde Adeleke put in a strong performance on the opening day of the CFL Combine (Matt Smith/CFL.ca)

Adeleke’s testing numbers were strong, but what the Ravens defensive back showed observers on Friday goes beyond just the numbers.

“I just didn’t expect him to have that kind of strength based on his length, and when you watch him in-game as a returned kicks he has such long strides that he make you think that he’s just a sprinter.

“You almost want to put him in that box of ‘skinny guy that’s out-running everybody but is scared to get hit’ — but he’s not,” Ferguson continued. “He’s physical and he’s long and lanky. I would put him right there with Dondre Weight in terms of physicality after watching the bench press and his test on Friday.”

Jean-Simon Roy was the centre of attention on Friday night after his dominant showing in the bench press.

Roy fed off the energy of hundreds at Regina’s Evraz Place and put up the sixth-highest mark in CFL Combine history.

“He got put in the Laval cookie-cutter machine and came out perfect just like everybody else,” said Ferguson. “I don’t even know if his shuttle and his 10-yard burst even matter because I think his game film and his bench is going to overwhelm anybody who’s scouting him.

“Then there’s the Laval shield effect,” Ferguson added, “where you see strong offensive linemen from Laval and you just get overwhelmed by the history. But he was really impressive.” 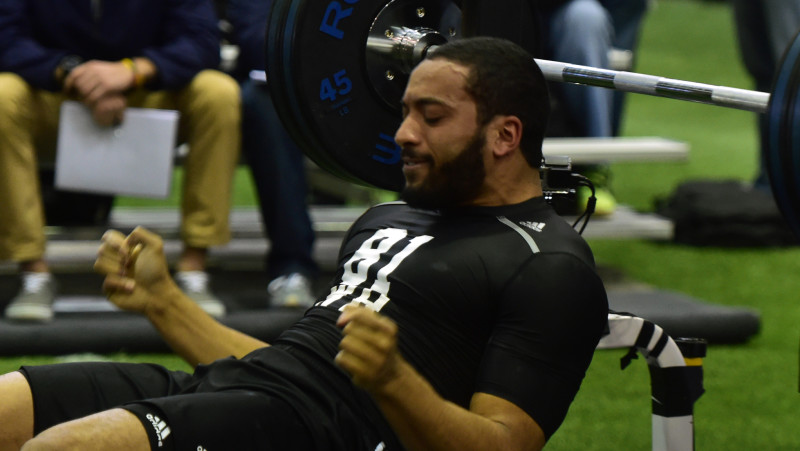 Nate Behar put in a strong showing for a receiver in the bench press on Friday (Matt Smith/CFL.ca)

Nate Behar came into the combine with something to prove and it’s fair to say, through one day at least, he’s off to a good start.

“Behar remains the most well-rounded receiver prospect in the draft,” said Ferguson. “He clearly took pride in the bench press, showed that he’s put the work in throughout his career at Carleton and he’s more than just a big-catch guy – he can catch quick routes underneath and by physical, get YAC yards.

“I think the only thing really holding him back from being a top-five type pick is a poor 40 because we already know how good he’s going to look in the one-on-ones.”

More on that on Saturday, when Behar will put his 40 on the record.