It’s an interesting combination of skills, back stories and experiences that the men who make up the Winnipeg Blue Bombers quarterback depth chart bring to this week’s spring camp.

Three of the four pivots who will be on the field Wednesday through Friday gathered at the Bomber Store late Monday afternoon to meet with media and kibbitz with a long line of fans in advance of the mini-camp that serves as a tease to the real thing next month.

There is the veteran, Matt Nichols, who established himself as the club’s QB1 last season and is now working to become one of the Canadian Football League’s elite pivots. 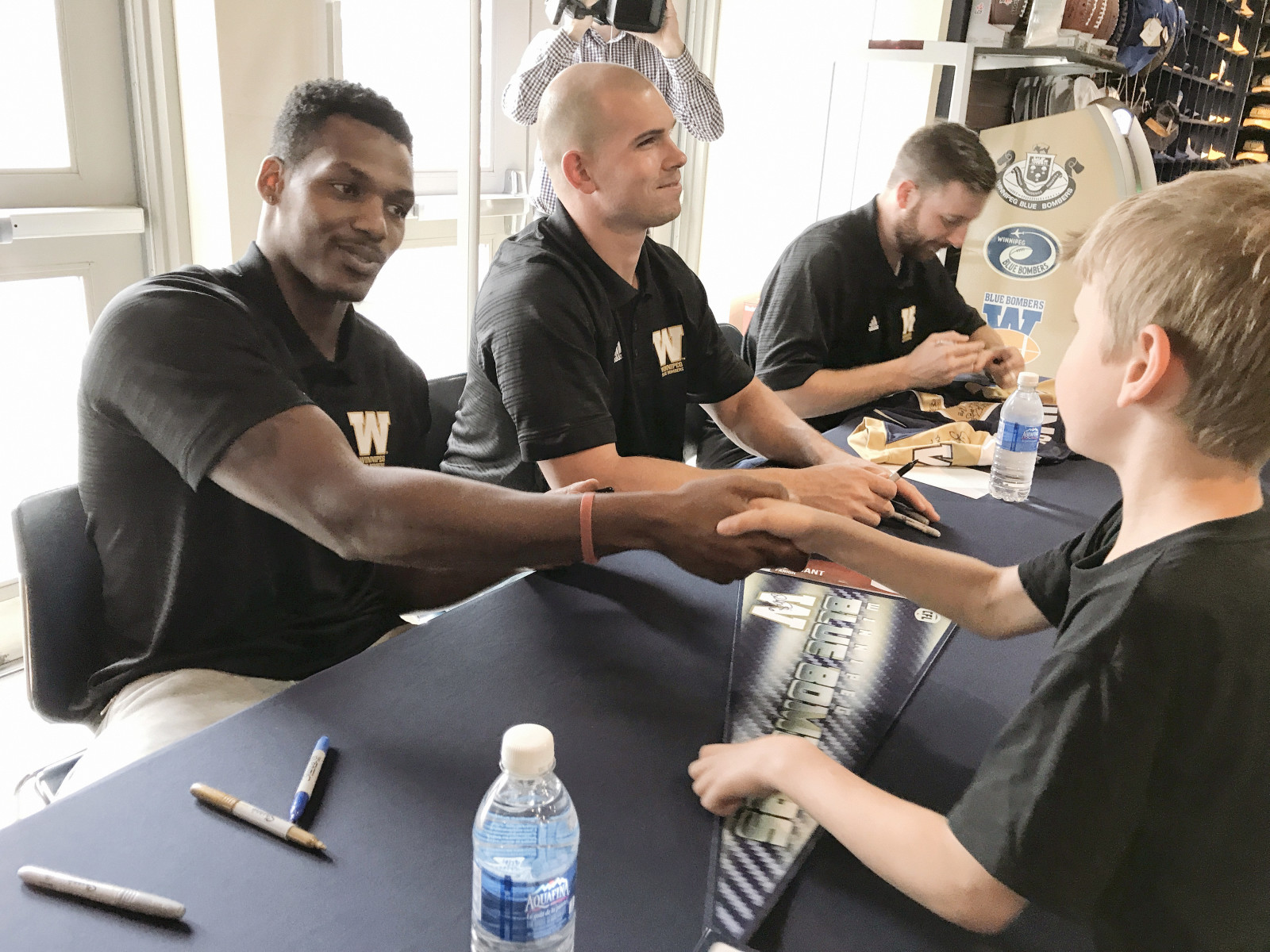 “Honestly, going into this season feels more normal to me than going into my last seven seasons have been,” Nichols said. “From second grade all through college I was always the starting quarterback… this feels more natural to me than coming in as the second or third guy like I have through most of my (pro) career where you’re trying to make your way but you don’t want to step on anyone’s toes. I can really be myself and continue to grow as a player.”

There is the veteran, Dominique Davis, who did not throw a single pass last year but is unofficially the new No. 2.

“Coach LaPo always tells us he doesn’t define the depth chart, we do,” preached Davis. “I’m just going to go into camp and compete, do the best I can and hopefully earn that No. 2 spot.

“This will be my sixth professional year. It’s been a long six years. I’m going to continue to keep my head down and keep working and be patient until my number’s called.”

There is the veteran, Dan LeFevour, who has bounced all around pro football while battling injuries and long odds to now be with his ninth pro team.

“It’s been a journey,” LeFevour said. “I saw an article earlier this offseason about Kevin Glenn and how grateful he’s been for his journey. He’s got something to talk about with anyone everywhere he goes, it seems like, and he’s really proud of his career path. I’m the same way.

“This is my ninth team in eight years. I’ve had a lot of different experiences that people my age don’t get to have.”

And finally, the Bombers spring camp will also include the unknown commodity that is rookie Myles Carr, who arrives after spending the last two years ripping it up for the Texas AM-Kingsville Javelinas.

Now, regardless of the varying levels of experience, all four pivots – including the fresh-faced Carr – have to know whenever the ball is snapped and coaches are watching that they are being evaluated.

Nichols will use to camp to fine tune what he learned working on in the offseason – he did a ton of self-assessment watching his own film while also studying the CFL’s other QBs – and get comfy again in offensive coordinator Paul LaPolice’s offence.

Davis wants to use the three days as a springboard to main camp next month and prove he can take the next step in his development. LeFevour admittedly has some catching up to do, while Carr gets an early lead on who the club might keep around as a potential practice roster developmental pivot.

And they all know that these opportunities are so rare that they dare not refer to what’s happening this week as ‘just mini-camp.’ 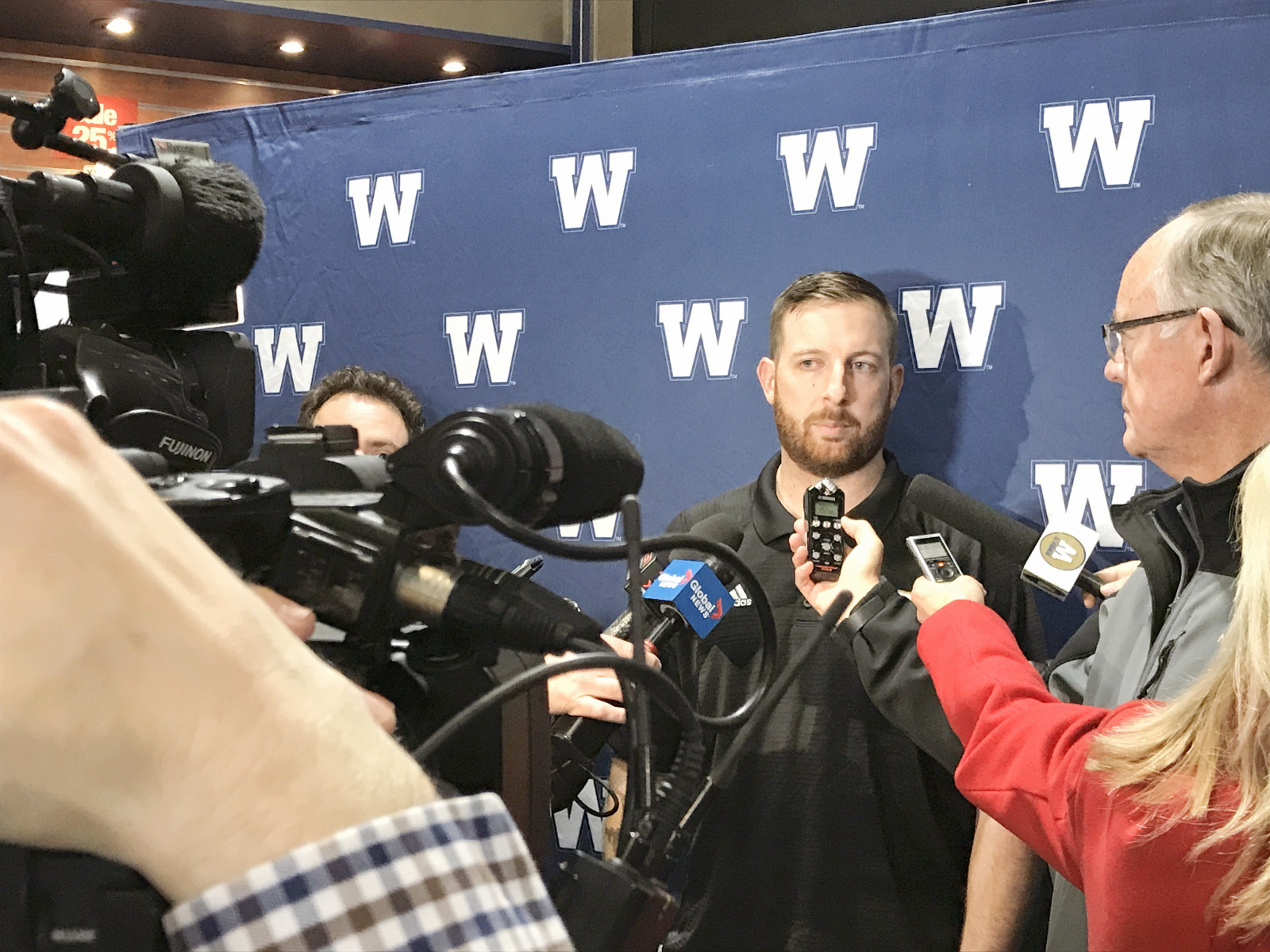 Consider, as evidence, how the Bombers quarterback depth chart has evolved over the calendar year. The 2016 season opened with Drew Willy locked in at No. 1, Nichols as the back-up, Davis at No. 3 and with Bryan Bennett on the practice roster.

The curtain closed on the year with Willy in Toronto, Nichols the starter, and with veteran Glenn and Davis in reserve and Bennett still on practice roster. Just a few months later, Glenn and Bennett are now Saskatchewan Roughriders, with LeFevour now pulling on Bomber colours after starting against them just last September and getting ‘his faced kicked in’, to use his term.

To sum up, then, things move fast in pro sports. All quarterbacks – especially those like Nichols, Davis and LeFevour – understand full well depth charts are always written in pencil, not ink.

LeFevour, in the end, might have summed up that sentiment best when asked where he thinks he stands on the QB pecking order.

“Anyone’s goal is to start. If you ask anyone it would be silly not to say they want to play. Otherwise, why play professional sports… go play intramurals or rec league or something. I think that’s everyone’s goal in the room: to play.”