Stop #1: The CFL Visits Our Troops In Ukraine

Stop #1: The CFL Visits Our Troops In Ukraine

If you haven’t seen on social media the #CFL has landed in Ukraine! We had the opportunity to visit Canadian troops who are stationed here and had an unbelievable day. I have never felt prouder to be Canadian and can say without hesitation this trip has been profound and frankly overwhelming at times. More on that in another post, but let me take you though what we had a chance to experience. Our day began with a bus ride to the base where we were greeted by a group of our soldiers. They had setup a room for us where they had laid out all sorts of equipment, primarily guns (without ammo of course), for us to pickup and hold and they answered any questions we had- and there we many. Please note that if my camera skills look off in the photos or videos from today, we are not allowed to show the faces of most of the troops on this base in order to protect their identity. 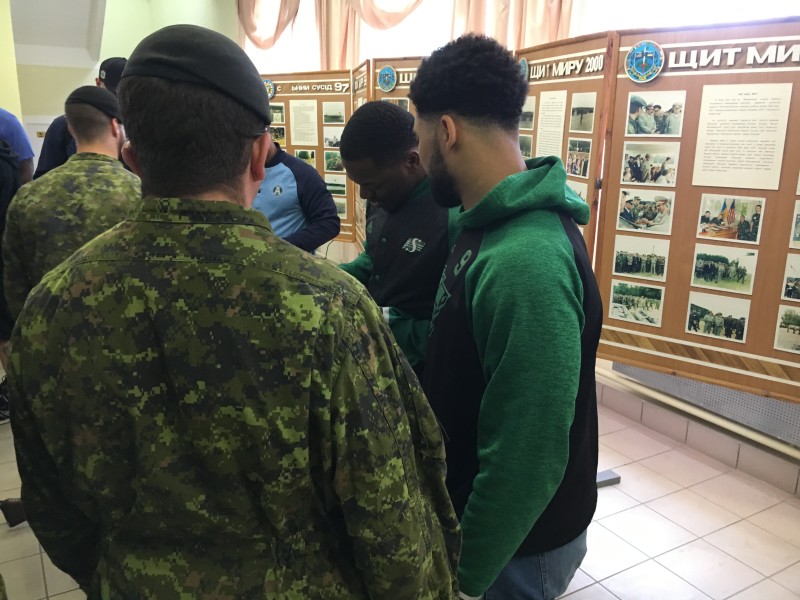 Then we were given a briefing on Operation Unifier, this is the what approximately 200 Canadian Armed Forces are working on in Ukraine. Essentially Canadians are there to help train the Ukrainian army to help it reach NATO standards, but please take some time to read more about Operation Unifier here.  From there we went to lunch, where we were served a traditional Ukrainian meal. Eating together (lunch and dinner) with the troops was easily one of my favourite parts of the day. Sharing such a normal moment under such unusual circumstances with our troops was surprisingly introspective and layered with emotion. 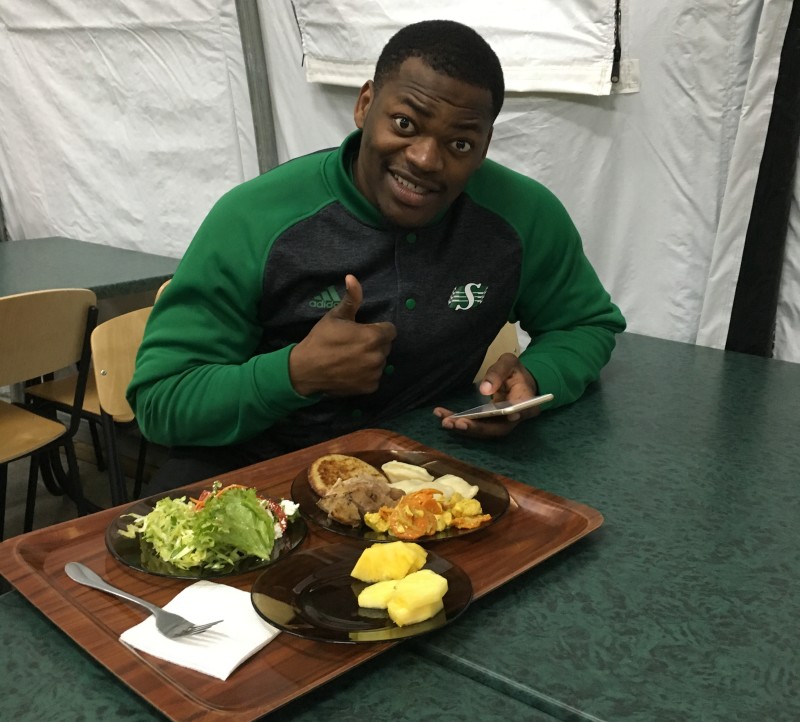 Following our meal we had a chance to host a group of our military on the football field! Yes, CFL footballs were sent over and they were flying around! This was what the players had been looking forward to (please go check out our Instagram story and SnapChat to take a look) The players were awesome coaches, breaking themselves into five groups by position and having the troops rotate through stations of position specific football drills and skills. At the very end we had a pseudo  special teams competition where the troops would try and catch a punt, being eliminated if they missed and the winner won a signed Stamps jersey! Watching the troops and our players cheer on the person trying to catch, hanging onto every movement until the person would catch, or drop. If successful everyone would erupt in whoops and applause and high fives…it was like something out of a movie.

A complete look at today’s visit to the troops in Ukraine .

What an amazing day.

From there we toured the base itself, which was an experience I will never forget. We had a chance to check out the Canadian gym, Canada house (where the guys hang out), some of the facilities and their living quarters. This was perhaps the most eye opening experience of the day. Men and women are stationed here for eight months and they almost all live in these MASSIVE bunk rooms, where each ‘row’ has about eight sets of bunk beds. The troops have made makeshift privacy curtains by hanging sheets over wire and all of their personal belongings are jammed into this one tiny area. I didn’t feel comfortable taking photos of this, it felt too personal. But there was one soldier who was proudly wearing his Saskatchewan Roughrider flip flops, so I asked is I could snap a picture and he happily agreed (Rider Nation you are EVERYWHERE) 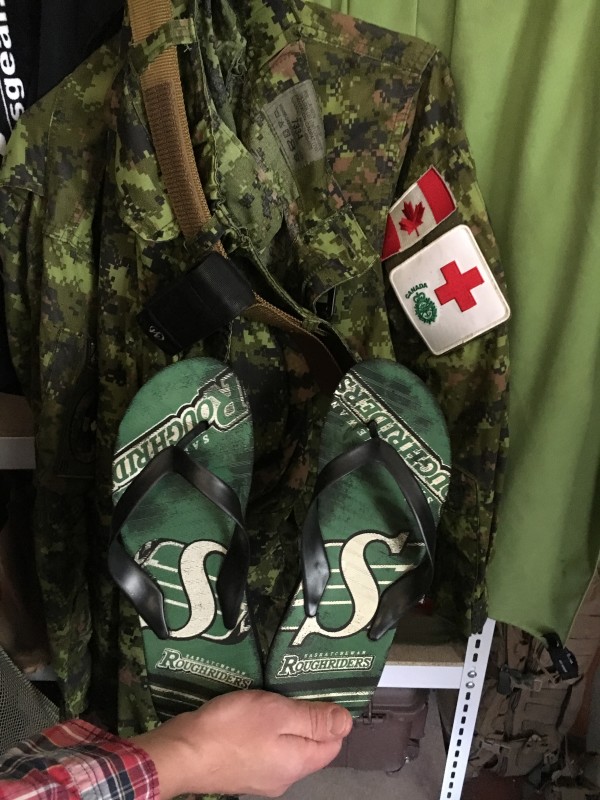 After sharing dinner with our troops we spent the evening in the auditorium for an awesome night! The Grey Cup arrived and was welcomed by a long and rousing applause. It was a moment – another I will never forget. The amazing Sara Orlesky from TSN hosted the evening which started by introducing the #CFL players on the trip. As each player was called up they drew a name of one of the troops to win a CFL prize; signed footballs, jerseys, t-shirts, ball caps and the troops LOVED it! Then we were all treated to an amazing show by Canadian country phenom Dallas Smith and laughed and laughed thanks to comedian John Sheehan.

It’s about 1:30am and we have another exciting day tomorrow so I am off to bed! Thank you for reading and please continue to follow all @CFL social accounts for more from our trip and if you’d like to get in touch with me directly @BrodieLawson on Instagram and Twitter.

.@MatthiasjGoose & @tbond252 are in the Ukraine visiting our troops at the International Peacekeeping & Security Centre! pic.twitter.com/mBaVy9zFxC

Great way to cap off our first day visiting the troops. Thanks @dallassmith for getting the boys rowdy! #SupportOurTroops #cfl @CFL pic.twitter.com/os5UWc6Nfw

Who’s representing your club on the trip to visit the troops?

Can you spot your guy?

This is an awesome experience and meeting great people of the @CanadianForces pic.twitter.com/5b9DAyn8kD

Not your typical offseason vacation. @CButler28 & @Filer64 are on an overseas adventure this week. Stay tuned. #TicatsVisitTheTroops pic.twitter.com/MurKiS2kwv

Some More Pictures from the Day: 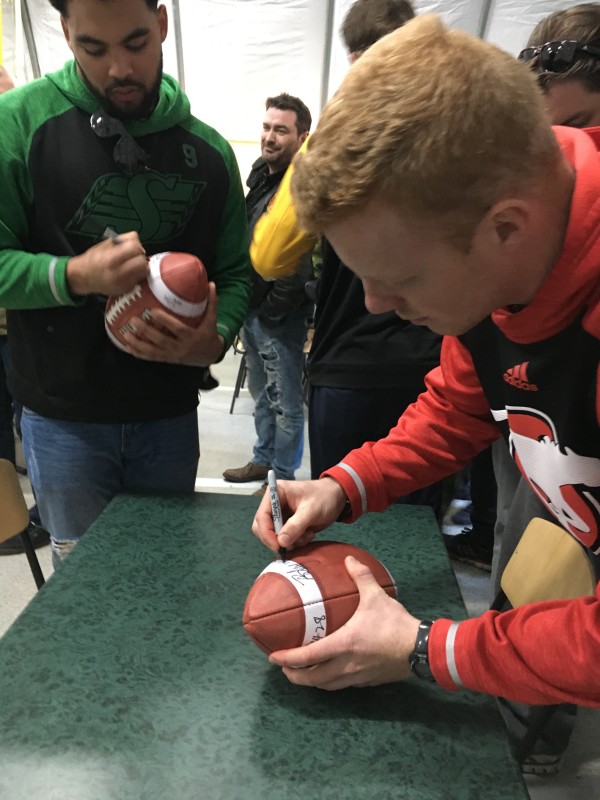 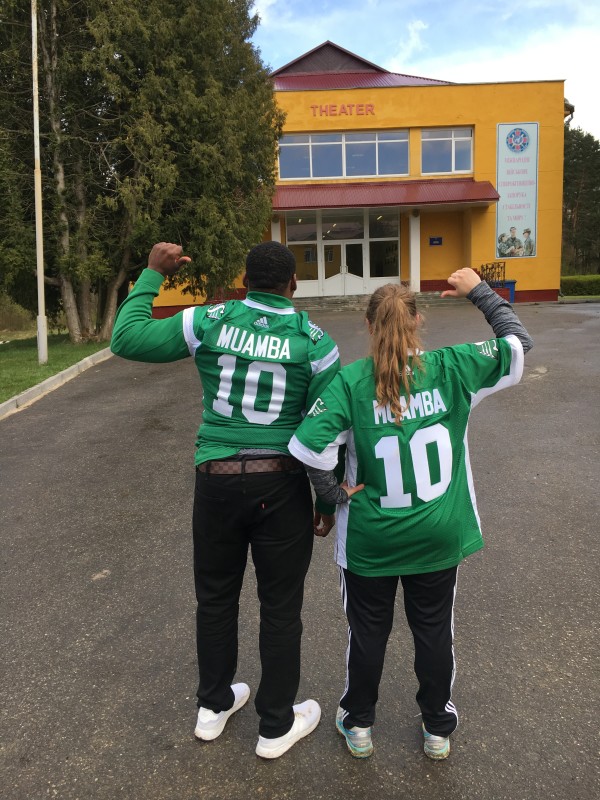 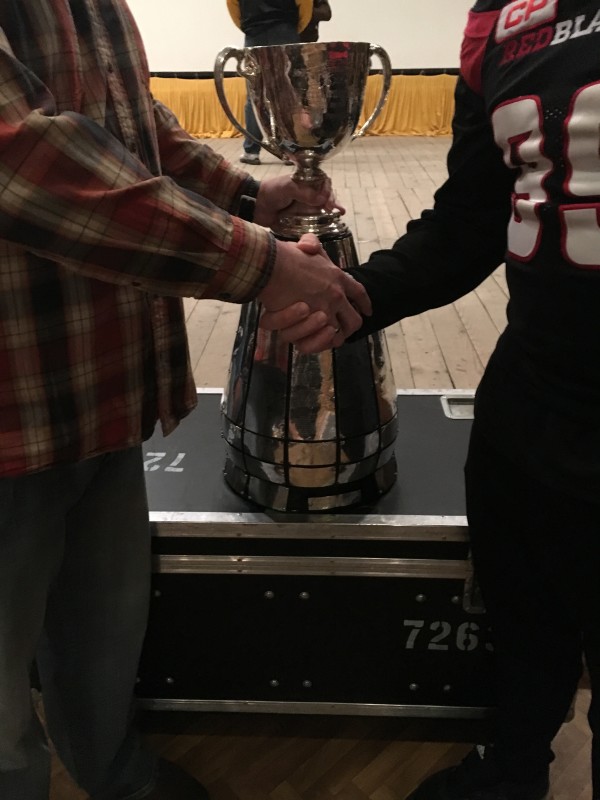 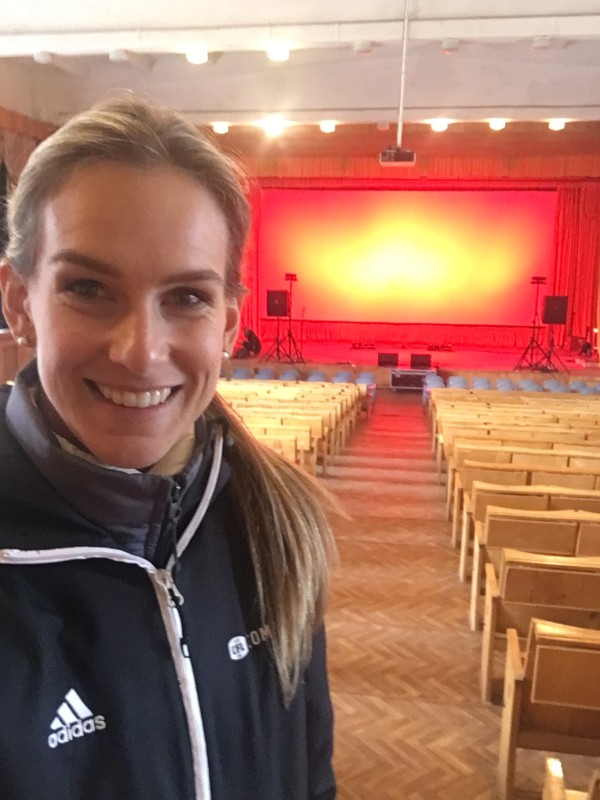