Collaros, Masoli lead the way as Ticats mini-camp kicks off 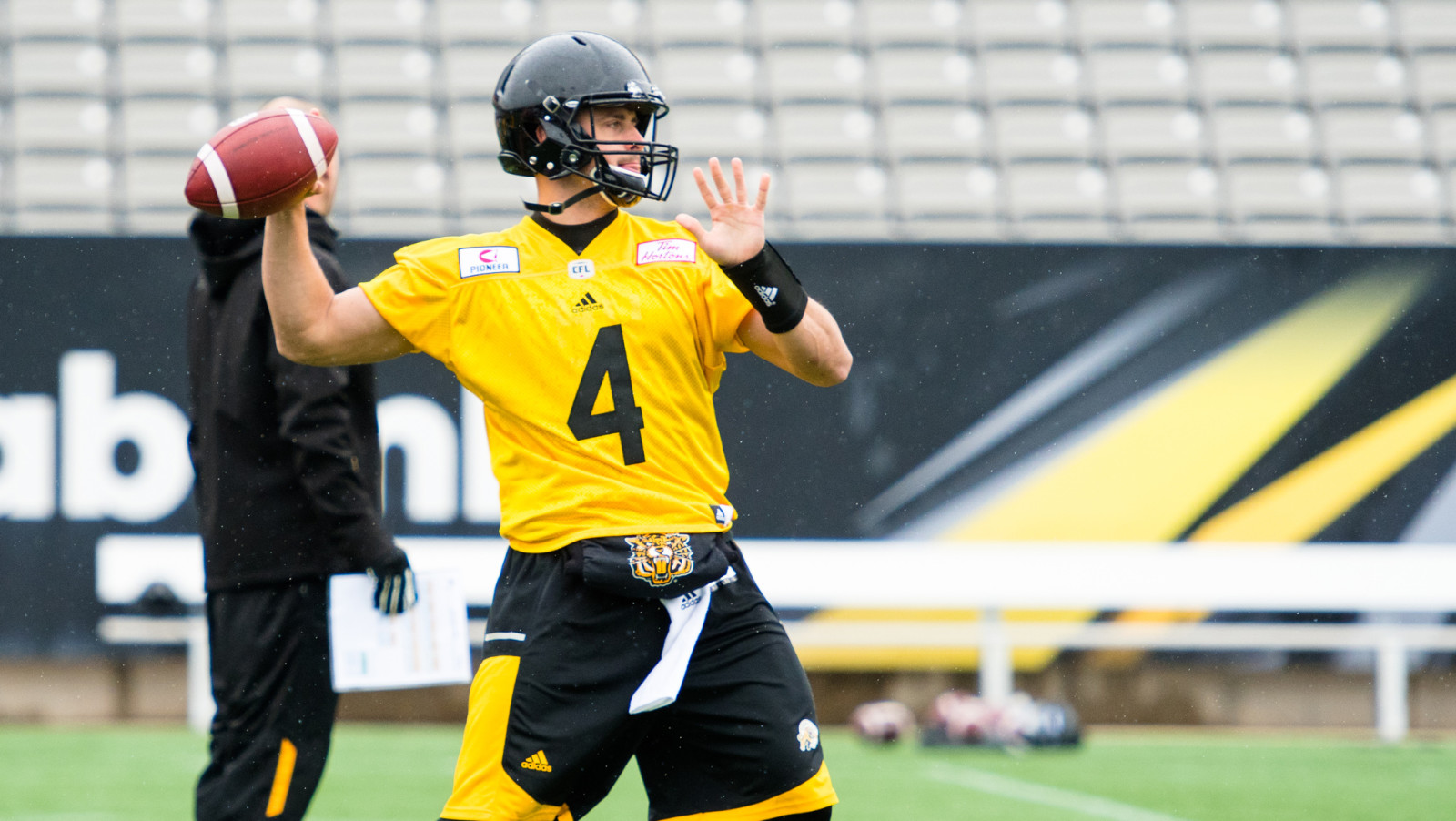 Collaros, Masoli lead the way as Ticats mini-camp kicks off

HAMILTON — The weather may have been cold and rainy but things were starting to heat up at Tim Hortons Field on Tuesday as the Hamilton Tiger-Cats held their first of three mini-camps this week.

Most notably in attendance were both Ticats quarterbacks, Zach Collaros and Jeremiah Masoli, and receiver Brian Tyms. The rest, that included first-year players under contract, invited free agents and negotiation list players, were there to be evaluated in hopes of impressing the coaching staff and being invited to training camp in May.

“I thought the energy was there,” head coach Kent Austin said. “The guys moved around well. They transitioned between periods like we asked them to. They payed attention to detail. They took coaching. We let them know that we’re not just evaluating their skill. That’s a piece of it but it’s only a piece of it. We’re evaluating their ability to learn, how they relate, how they take coaching.”

Collaros and Masoli were there to provide a veteran leadership role to those in attendance – something that they and coach Austin had talked about earlier that day before hitting the field.

“Both of those guys have that naturally anyways,” Austin said of his quarterback’s leadership abilities. “They’re total team guys. They’re very endearing to their teammates. They certainly know the offence. We think everybody can lead. I talked to the quarterbacks in the meeting this morning that yes, we believe leadership is plural but they have a special role in that.”

Collaros, who is heading into his sixth CFL season, was aware of his expectations this week – provide guidance to some of the invitees of what’s to be expected as a Tiger-Cat.

“I try to be a leader by example,” Collaros said. “Understanding the offence, understanding the expectations and the culture here and trying to convey it to those guys so they understand it when they get on the field which gives them the best possible opportunity to be on this team. I just try to lead in that way.”

“There’s a lot of new faces around here,” said Masoli. “So (I’m) just trying to get those guys up to speed as fast as possible to help them show what they can do.”

The 28-year-old Collaros missed the beginning of the 2016 campaign after undergoing surgery on his knee in 2015 and after completing his rehab process, he says he’s 100 per cent ready to hit the gridiron to start this year.

“I feel good. When it rains the knee is sore a little bit sometimes,” he laughed. “We have a great staff here and any time I’m up here I feel a lot better when I go back down to states just from the hands-on treatment that I get here.”

After mini-camp was over, and the rain had subsided, Austin said the team and Fantuz are close to coming to an agreement. Fantuz hit the free agent market in February and has yet to re-sign with the Tiger-Cats or ink a deal with another team.

“I think we’ll have some pretty good news here soon. I’ll just leave it at that,” he said. “We want Andy here and Andy wants to be here. We’re just working through the situation but I think we’re going to come to a pretty positive conclusion here shortly.”

Chad Owens, who was also a free agent when February rolled around, left Tiger-Town and headed to Saskatchewan to join the Roughriders. Without Owens, and Fantuz’ status unknown, Hamilton was left with a vacancy in the receiving corps for a veteran presence.

“He can teach it. He’s that well-versed in the offence,” Collaros praised Fantuz. “He can get up on the board and teach the releases. He can articulate it, that’s how well he knows it. It’s never bad to have a lot of voices around that can teach it. Especially for the young guys. And whether they’re Canadian or American guys, he’s had so much success in this league. 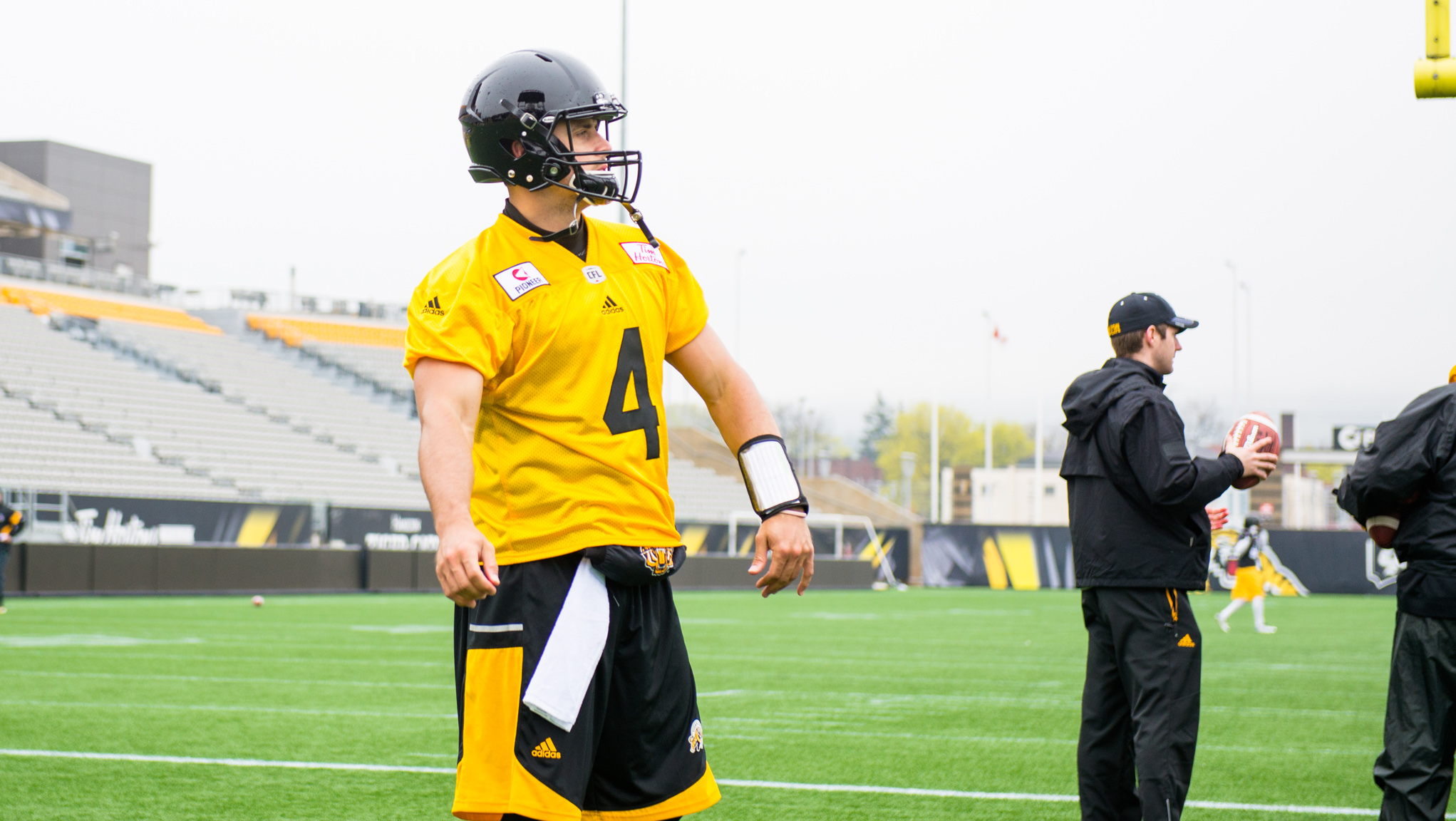 Fantuz also hit a career high in receptions (101) last season to go along with 1059 receiving yards – the first time the Chatham native has hit the 1000-yard mark since 2010 – and will likely be a favourite target for the Tiger-Cats’ quarterback this season if a deal is reached.

“If you have a game on the line, he’s definitely a guy you want to throw the football to,” said Collaros. “He’s got great hands, great presence about himself. He’s confident in himself, you can call that clutch, I guess. He understands our offence inside out. He’s been playing in this league forever, so he understands coverage’s, where to be and again, he’s just a great player.”

Austin and his staff will be also assessing the seven kickers who are attending mini-camp this week. The Ticats are looking to fill the kicker/punter void before the season begins after the departure of Brett Maher, who signed with the NFL’s Cleveland Browns in March.

With just one day of mini-camp in the books, the Tabbies bench boss said it was too early to say if any had made a lasting impression but said he and his staff know exactly what they’re looking for.

“We’re looking for a three-way guy,” Austin said. “We’re looking at this ability to do all three. We take him through a process, not just leg strength but directional kicking, placement and then look at the combination of skills to determine who’s the best fit to be able to do all three.”