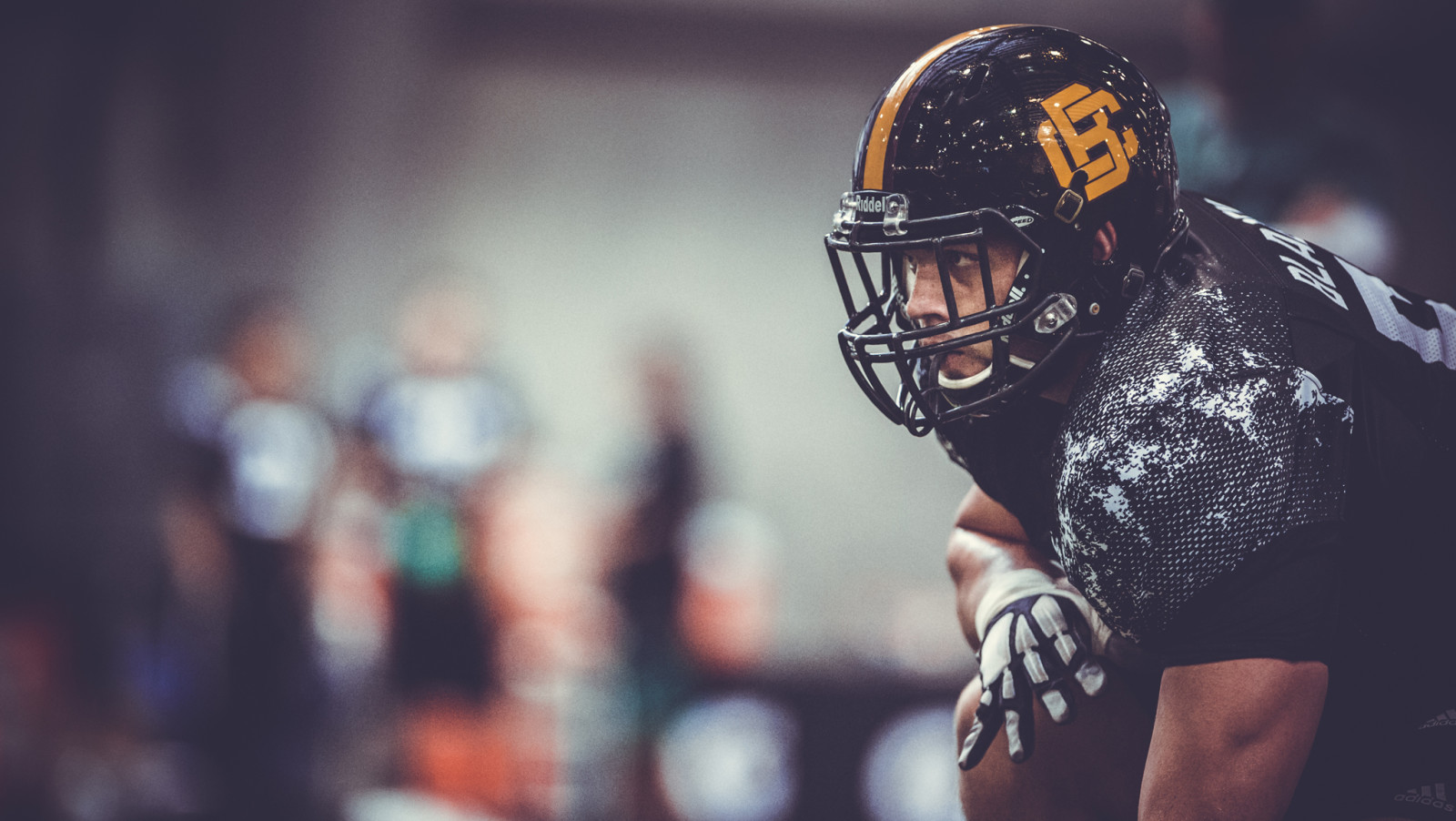 If there’s one small-thing-that-says-a-lot story about Dariusz Bladek that a CFL general manager needs to know before Sunday’s draft, this is it.

Last year, when he was stuck in football purgatory — cut from the Baltimore Ravens’ mini-camp and his Canadian passport arriving too late for him to qualify as a national for last year’s CFL season — Bladek split his time training at his old high school in Kissimmee, Fla., and helping his father with retail renovation work.

The jobs were almost always done overnight. Get in, tear the place apart, sometimes haul big, heavy equipment in or out, then clean it all up and leave like you were never there.

“We do everything. Clean, demo, fix, finish. The whole nine. My dad is a craftsman. I really do take my (attention to) detail as a passion, as he has it for construction, I use it for football. I thank him for that,” Bladek says. “It gives me a headache sometimes, but he loves it.” 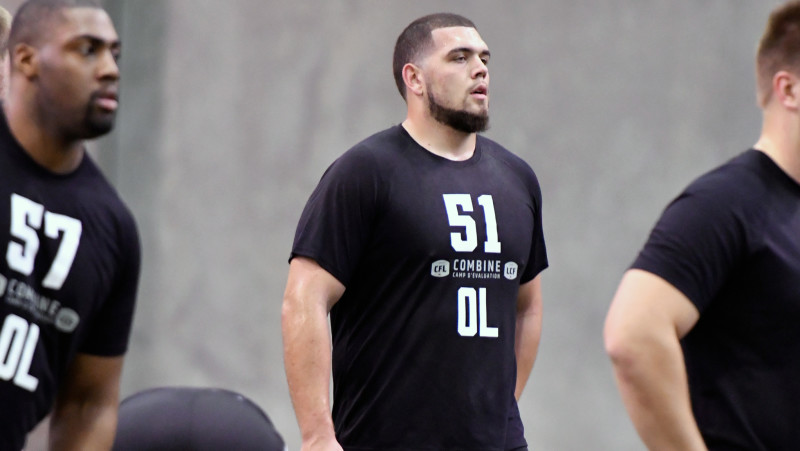 Dariusz Bladek is pictured during the CFL Combine in Regina back in March (Arthur Ward/CFL.ca)

MORE ON THE CFL DRAFT
» Ferguson, Forde tackle the draft’s burning questions
» Breaking down the draft’s top 20 prospects
» The latest headlines from the draft

Exhaustion and headaches aside, that attention to detail perked up one day late last summer. While juggling work and workouts, he saw his football team practising. A kid on the offensive line had awful technique. Terrible. Horrible.

It stopped Bladek in his tracks. Killed him, he said.

“I have a perfectionist thing where if I see really bad technique I’ll be like, ‘All right, come here. I’m going to teach you something. I’ll break it down from the first step’,” he said. So the part-time construction worker and full-time athlete in training squeezed another job to his jammed schedule. O-line coach. He ended up spending the entire season working with his alma mater.

“I loved watching people get better. I never knew how good the film was, just to watch one of your own players do what you’ve taught them or coached them. Damn, that’s awesome,” he says. “I think one day I would go back to coaching, of course after my career and I’d still be in the medical field (he has a bachelor of science in gerontology) at the same time. Who knows?”

It seems funny to talk about the little things when the subject is a 6-foot-4, 329-pound offensive lineman, but those are what continue to suggest that Bladek could be a special fit for a team in the CFL. The Bethune-Cookman grad sat at 10th in the CFL Scouting Bureau’s final rankings last month, having moved up five spots on the heels of a solid showing at the CFL draft combine in March. While he showed well on the field, he did as much as he could to show that he can be a difference-maker off the field, too.

At the draft combine in Regina, Bladek used the end of an interview with one team to ask an o-line coach in the room some detailed questions about the work they do.

“He’s a coach, I’m a player. And I have a question,” Bladek said of the exchange. “I watched film and wanted to pick his mind on the technique that they were using.

“It was a good answer and it was a good Q&A between me and him. I thought I caught him off guard a little bit but it’s something that had been bugging me. As a professional or a professional-to-be here, I felt that was important.” 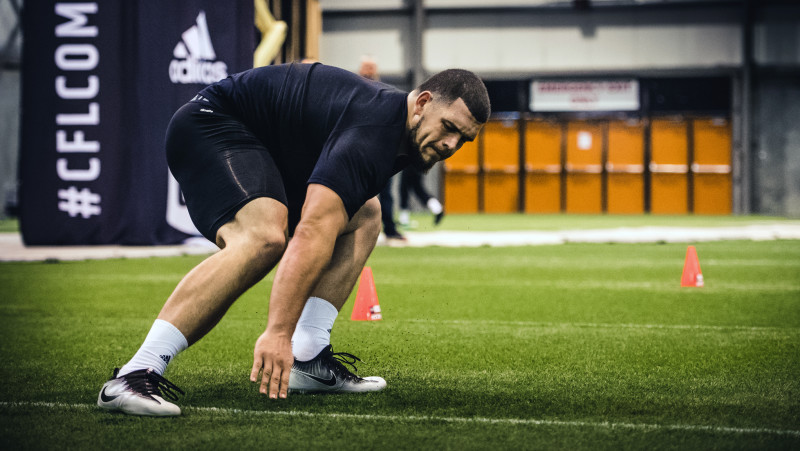 Bladek has been tabbed as a potential first round pick by draft insider Marshall Ferguson (Johany Jutras/CFL.ca)

Bladek’s high school coach, Corey Fleming (he left that job in 2013, two years after Bladek graduated), remembered Bladek as the chatty, high-energy kid on his team. He tried to steer that in the right direction.

“Me being an educator, I liked to utilize your strengths to help your team,” said Fleming, who has done speed and agility work with Bladek this year to help ready him for the CFL. “If he’s someone who likes to talk, I’d rather have him talking about football and teaching guys technique, things like that than having him talk about what girl is the prettiest in the class. Tailor his strengths…into benefitting the team.”

Bladek was hungry for a scholarship as a senior and the switch flicked for him that year, Fleming said.

“He really took ownership of taking online classes going into his senior year to get his GPA to where it needed to be to even get into a school,” Fleming said. “Really just took the time to just work on being aggressive and really utilizing his size and athleticism to his advantage. Once he understood that part of it, it was like you couldn’t stop this kid.”

Bladek went to Bethune-Cookman, just under a two-hour drive from home, to stay close to his family, his younger brother in particular. A shoulder injury forced him to red-shirt his first season, but he started the next three years. While he grew and improved on the field, he built a strong bond with Bethune-Cookman’s assistant head coach and defensive coordinator, Charles “Yogi” Jones.

“He’s very gregarious, he’s a leader, he’s hard working,” Jones almost immediately said of Bladek. “He’s the guy that sits down with all the new players and goes through film with them. It didn’t matter who the kid was, who the young guys were. If they were interested, if they wanted help, they knew who to ask. Dariusz was the guy.”

That kind of player: hard-working and smart enough to recite the playbook back to you, is the extension of the coach that every team needs. 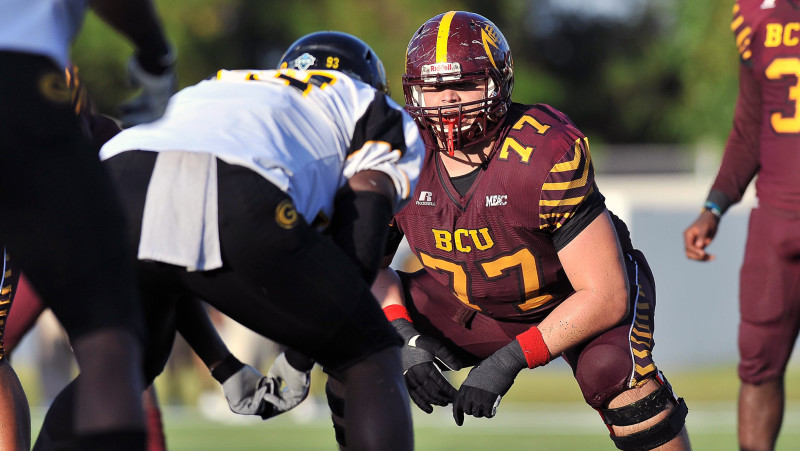 Bladek learned of his Canadian status a year ago, when the Calgary Stampeders expressed interest in him. His mother was born in Montreal, adopted and grew up in the States. His agent recommended he look into dual citizenship and told him about the benefits of him being a Canadian player in the CFL.

“The more and more I learned about it…I didn’t want to work so hard for something, I didn’t want to go play for something and feel like I couldn’t get get truly involved and in touch with the city I play for if I wasn’t living there 24/7,” he said, adding his brother may follow the same path and attend university in the city that he ends up getting drafted to.

Both of Bladek’s former coaches have at least a familiarity with the CFL. Fleming coached former Hamilton Tiger-Cat and Winnipeg Blue Bomber receiver Quincy McDuffie in high school. Jones spent two years (2002, 2003) as a player personnel assistant with the Cleveland Browns; a role that took him across the CFL, scouting talent.

“The thing I’ve always told our players is, ‘Don’t turn your nose up at a CFL opportunity,’” Jones said. “It’s a league that’s actively scouted by the NFL and it’s a way to possibly get back to the league. If you don’t, it’s a good league to make a good living, playing the game that you love.”

Both coaches see him having a long career in Canada.

“I really think he’s going to be a solid guy,” Fleming said. “Whoever picks him up will get their money’s worth. He’s the guy that has the total package. Not only on the field, but off the field.”