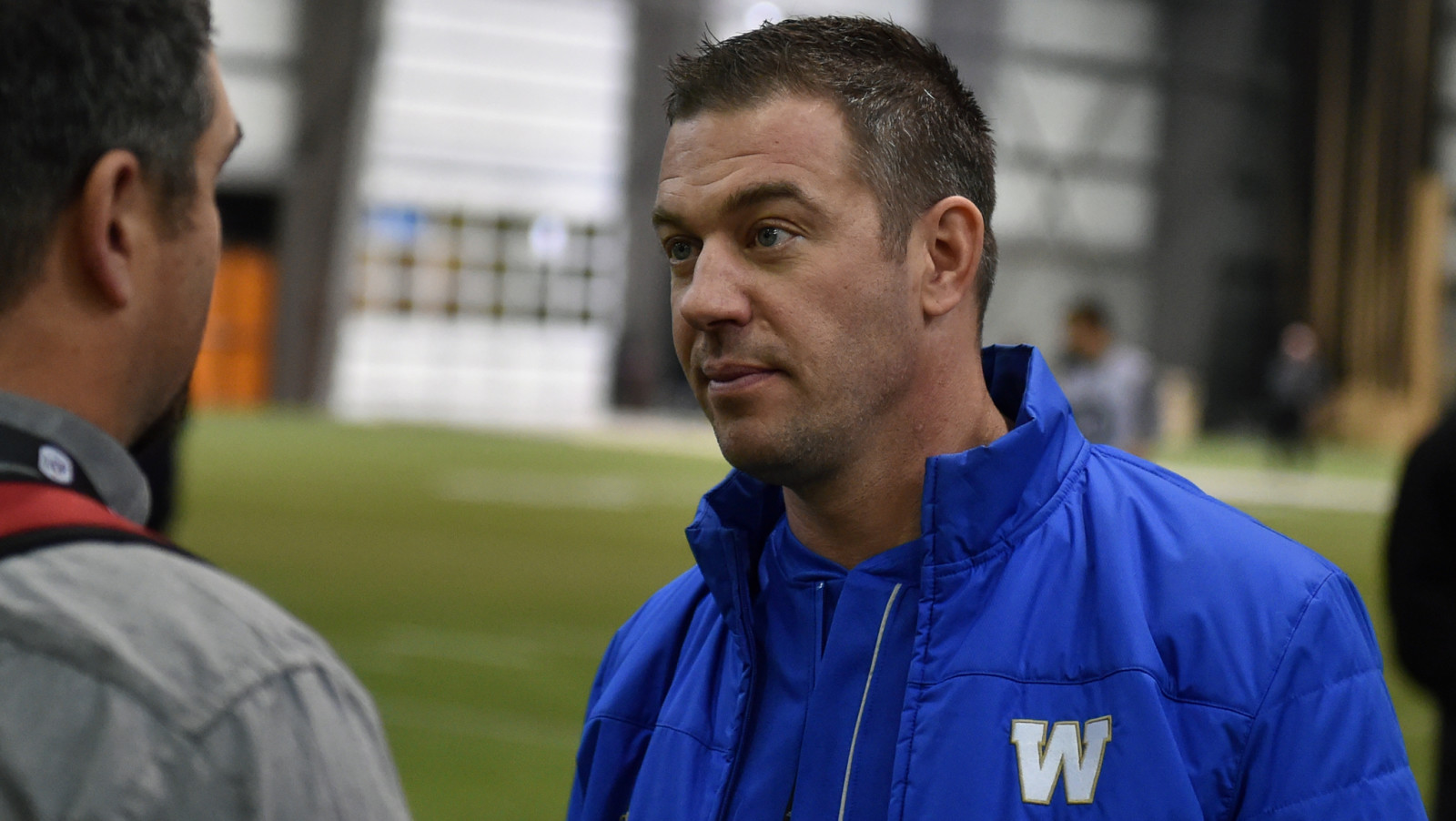 Undoubtedly Winnipeg Blue Bombers fans are now aware of the club’s faith in Faith Ekakitie and the risk/reward in grabbing Geoff Gray, now a member of the Green Bay Packers.

Their stories have dominated discussions since last Sunday’s draft in which Ekakitie was selected first overall and Gray – a Winnipegger and University of Manitoba product – was chosen eighth.

But somewhat lost in those two additions is how the entire draft class, including the selections after Ekakitie and Gray, impact the team’s overall Canadian depth.

“A lot of this draft class, realistically, is about us looking at improving the bottom end of our roster and practice roster guys, truth be told,” said Bombers GM Kyle Walters.

“We’re willing to take some draft picks on guys we really don’t need to come in this year and help us win football games. But let’s develop them for a year and see where they’re at.”

That’s a dramatic reversal in the approach this team was forced to take through the 2014-16 drafts. Yes, the Bombers nailed a lot of the picks in those years – 13 of 20 selections are on the roster – but the Canadian talent needed an overhaul and that meant there was certainly opportunity for new faces to make an immediate impact. 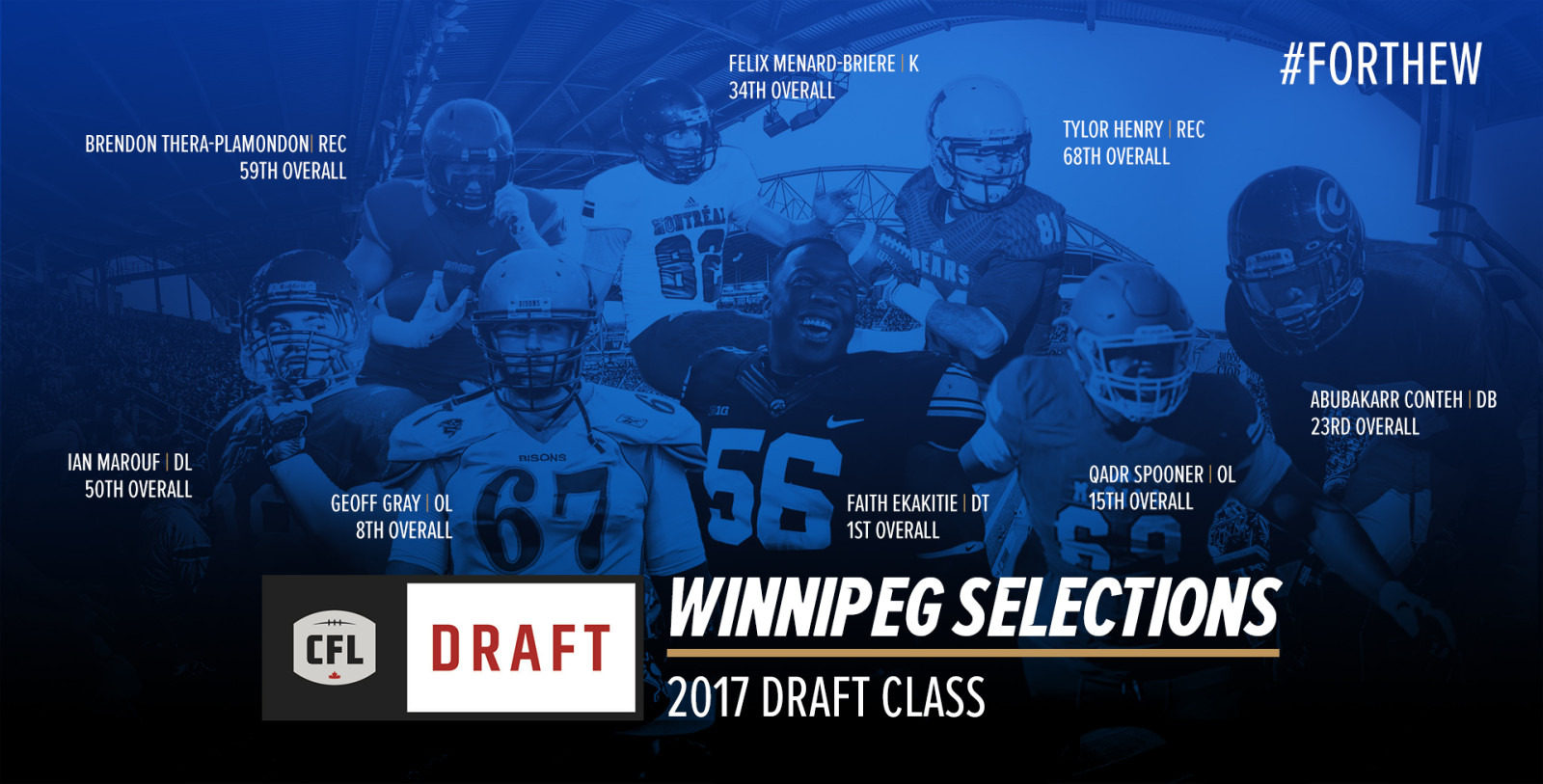 With the Canadian cupboards now full, there is considerably less pressure on the new draft class to contribute right away. Countering that, is this: the 2017 roster is going to be a lot tougher to crack.

“You look at your roster and you want to be able to draft guys who have a chance to make your team,” said Walters. “Guys with potential and higher upside… that’s what we targeted and we can be patient with these guys knowing we’re not expecting these guys to come in and start.

“But we want them to upgrade, whether it’s the bottom-end of the draft roster into our practice roster. This is about improving the overall Canadian content in our locker room and I know we did that.

“It speaks volumes for our organization in that we’re making sure all 21 Canadians on the dress roster, the guys on the practice roster, they’ve beaten out some very good football players. Just because you were here last year in that role… you’re going to be pushed this year. That’s a good feeling for our roster for sure.”

Some other leftover draft-related notes and tidbits…

THEY ARE BOMBER LEGENDS… all of them. And they could certainly serve as both a large shadow and inspiration for Ekakitie.

The defensive tackle now joins an impressive list of University of Iowa alumni who came north to the Bombers after their college days.

That crew includes Canadian Football Hall of Famers Ken Ploen – still a legend in these parts – and tackle Frank Rigney, as well as Winnipeg Football Club Hall of Famers Sherwyn Thorson and Bill Whisler and defensive back Jovon Johnson. 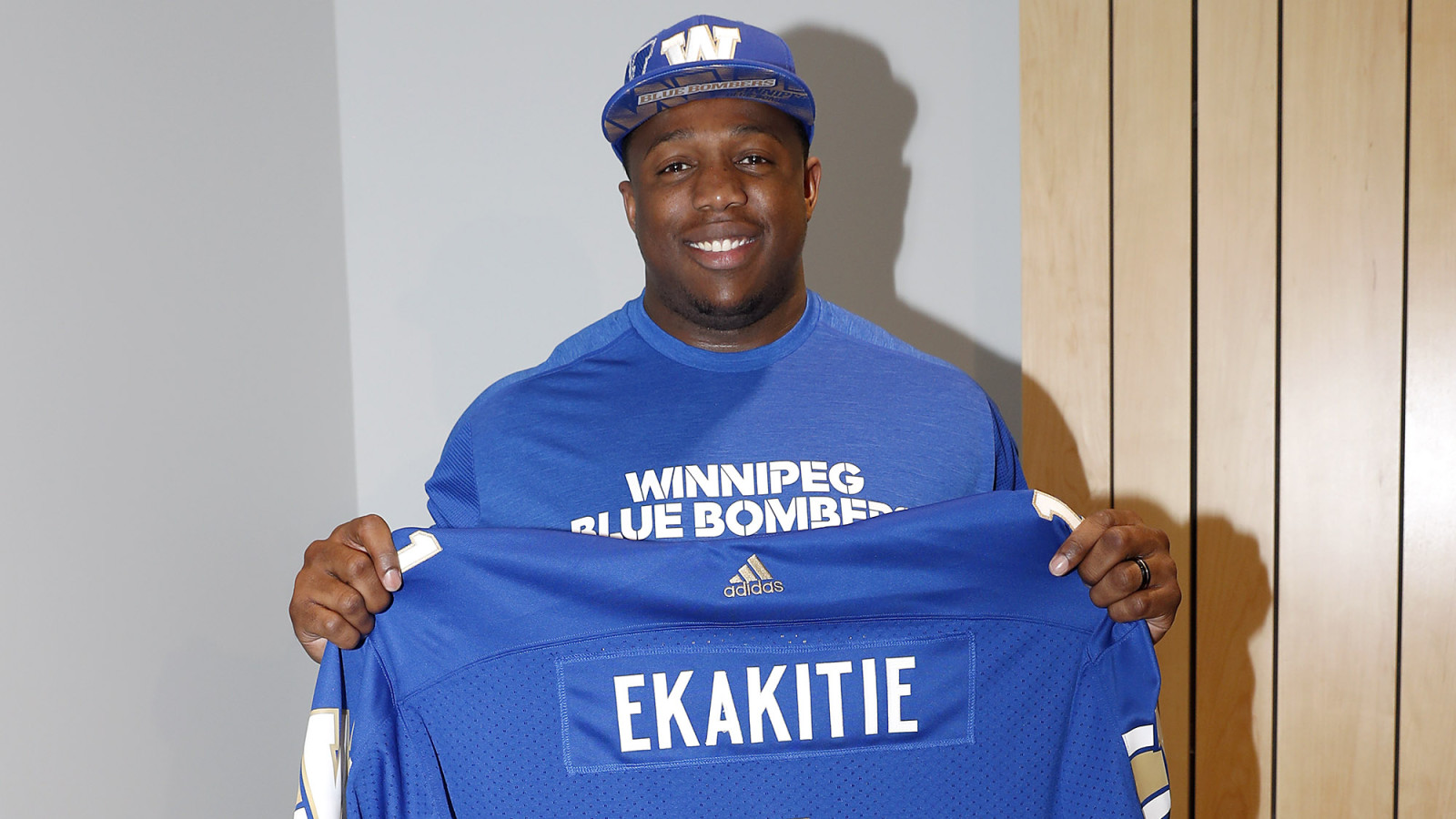 “We’ve had a lot of guys play in the NFL, but most recently, Nolan McMillan (OL, Ottawa) and Drew Tate (QB, Saskatchewan-Calgary-Ottawa) was one of our better players and has had a nice career in Canada,” Hawkeyes head coach Kirk Ferentz told BlueBombers.com.

“And of course, Jovon Johnson was one of my favourite all-time players here. What he was down here is exactly what he’s done up there.

“When you start to mention people like Ploen and Rigney… those are some pretty good names.”

Ekakitie was called by some draft gurus as the most pro-ready prospect available in the draft – excluding those under NFL deals – and helps bolster a Canadian contingent along at the D-tackle that includes veteran Jake Thomas, 2016 draft pick Rupert Butcher, and Ian Marouf, who was selected in the sixth round Sunday.

“I want to strive to be the best at what I do,” said Ekakitie. “I haven’t been playing in the game for very long. I can’t tell you personally what my ceiling is or how good I can get. I think you have to ask the coaches who have been coaching for 30, 40 years and they would probably be a better evaluator of talent than I am right now.

“Hopefully it leads to being an all-star at some point. My goal is to drive.”