Young adjusting but enjoying the process along the way

Young adjusting but enjoying the process along the way

Asked Sunday how much progress he has seen from quarterback Vince Young over the past two months, Jackson smiled and replied: “A lot. We can get out of the huddle now.”

After stressing that he was joking, Jackson — the Saskatchewan Roughriders’ quarterbacks coach — explained that the CFL team’s playbook contains some calls that can get what he termed “wordy.” He then rhymed off a play that took six seconds to recite.

For Young, that call and others like them were foreign to him when he signed with the Roughriders.

“I understand it can be kind of like Spanish or a different language for him right now,” Jackson said after Day 1 of the Roughriders’ training camp at Griffiths Stadium on the campus of the University of Saskatchewan. “But I definitely see the progression coming.”

Young, 34, is attempting a comeback to the football field with the Roughriders. He hasn’t played in a regular-season game since the 2011 NFL season and he hasn’t been on the roster of a pro team since 2014.

But the former University of Texas Longhorns star and Tennessee Titans starter remains focused on getting back on the field. He’s trying to absorb a different playbook for a team in a different league with different rules than he’s used to — and it’s a learning experience.

As he said Sunday when asked where he is mentally: “Don’t try to move too fast.”

“I’m having a good time,” Young added. “The opportunity’s great. It’s fun to be back out here playing ball. I’m just taking it one day at a time.

“This is not new to me. I played football before, so it’s all about getting back into a rhythm, taking off the training wheels, getting back on the bike and playing football.” 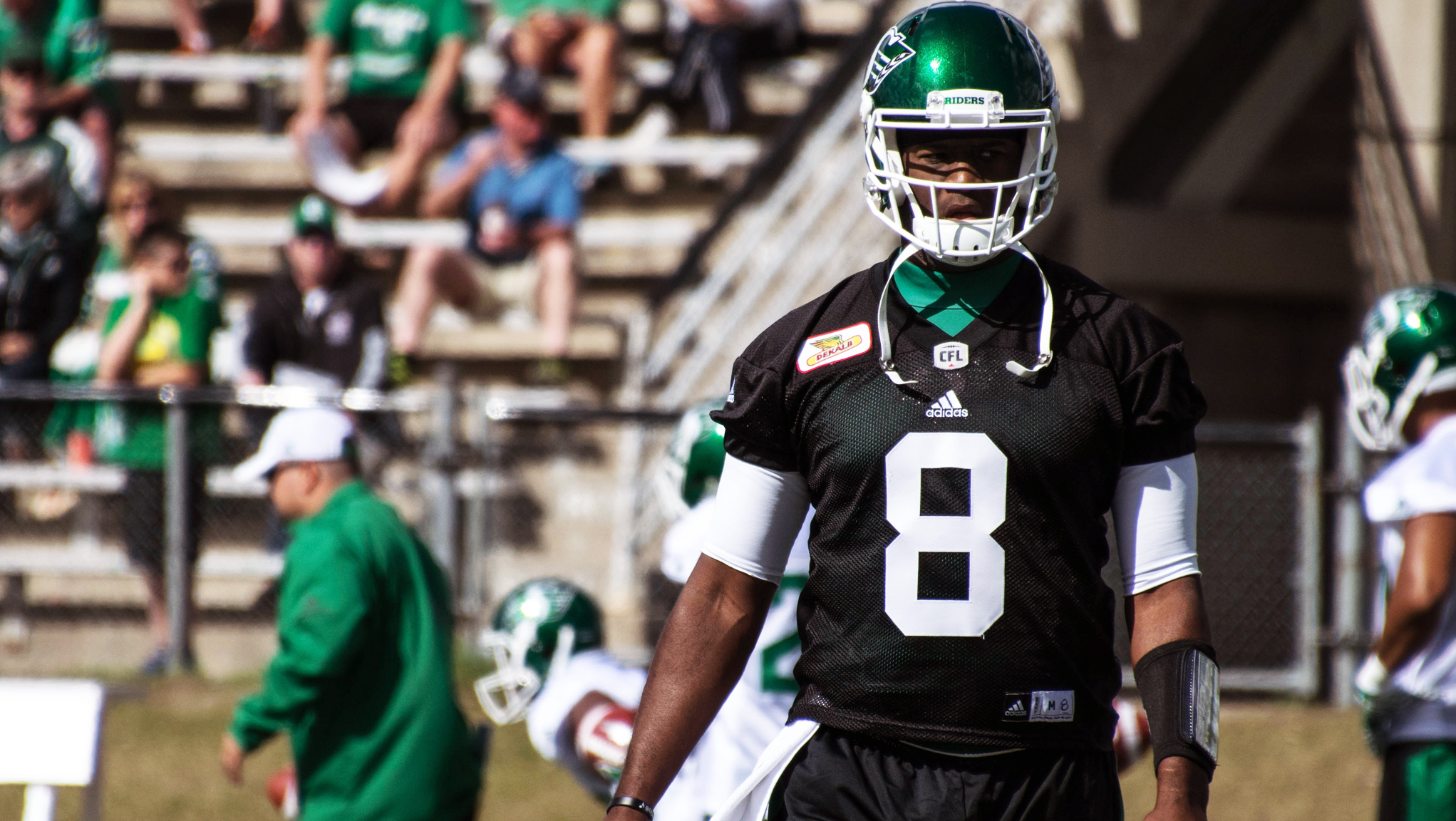 Young had a stellar college career at Texas, where he went 30-2 over his three seasons as the starter and became the first quarterback in NCAA Division 1 history to exceed 3,000 yards passing and 1,000 yards rushing in the same season.

A Heisman Trophy finalist in 2005, Young was selected in the first round (third overall) of the 2006 NFL draft by Tennessee. He was named the NFL’s offensive rookie of the year that season and was selected to appear in the Pro Bowl — the first of two such appearances in his career.

Young was released by the Titans in July of 2011, but immediately signed with the Philadelphia Eagles. After his stint in Philadelphia ended, he spent time with the Buffalo Bills (2012), Green Bay Packers (2013) and Cleveland Browns (2014) but didn’t appear in a regular-season game with any of them. He announced his retirement in June of 2014 after being released by Cleveland.

He had been working at the University of Texas and on the Longhorns’ television broadcasts when the Roughriders called in January. Jackson and other Saskatchewan coaches worked out Young in March and he signed with the Roughriders a week later.

Young attended Saskatchewan’s mini-camp in Florida in late April and, on Sunday, joined four other quarterbacks on a wind-swept field in Saskatoon.

“I thought he was a little bit better today (than he was in Florida) in these team-type activities,” Saskatchewan head coach-GM Chris Jones said. “It’ll be interesting to see if he can continue to make strides.”

Jones admitted he and the defensive coaches threw “a lot of stuff” at Young and his fellow QBs to see who could adjust. That was just another test for Young, who has spent four months trying to get up to speed on the CFL.

“I think I’ve adjusted OK,” he said. “There’s still a lot of work to be done. All you can do is take it one day at a time. My whole focus for today was making sure of the timing of the receivers and the offence, making sure I’m translating the words in the huddle right, making sure everybody’s in the right place, listening to the play clock — the details from the offensive standpoint that can keep us on the football field. 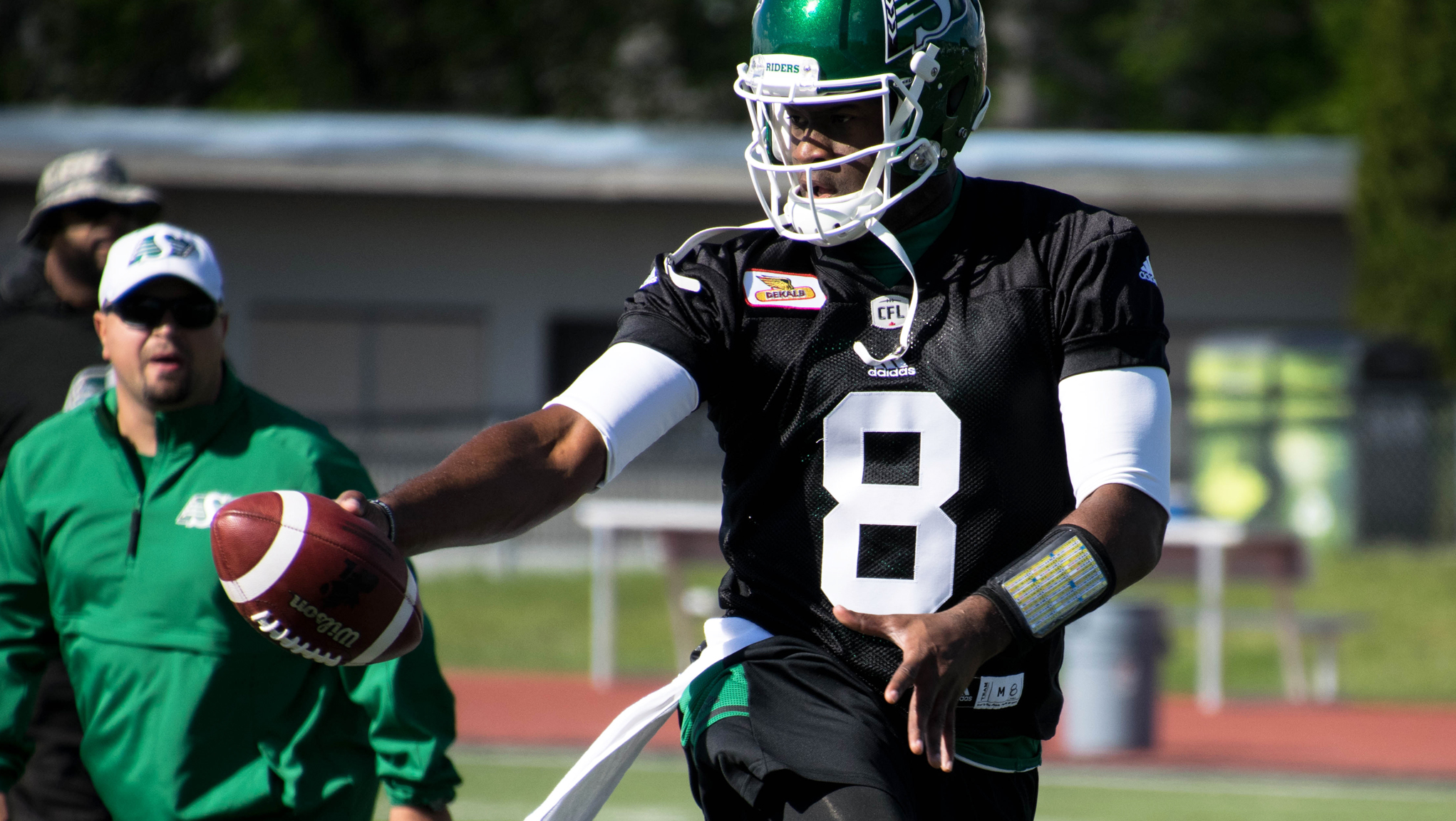 “It was a definite learning experience for me, but overall, I think I handled it well.”

As Young’s learning continues, so does the physical work.

The 6-foot-5 pivot admitted he weighs around 250 pounds, but he expects to be down to 240 shortly. To that end, he’s still getting up early to work out in the weight room or to jog.

In meetings, he’s bouncing questions off Jackson, offensive co-ordinator Stephen McAdoo, veteran Kevin Glenn and the other quarterbacks. Then, during practices, Young tries to be another set of eyes for the QB who’s taking repetitions.

The whole time, Young has plenty of eyes on him. Among the onlookers Sunday was a fan who had a Longhorns helmet with him.

“I think of him as just another guy and I’m sure that’s how he wants to be looked at,” Jackson added. “He doesn’t want to put himself on a pedestal or, with the things that he’s accomplished, let that be who he is. For him, it’s still about trying to etch his name, so to speak.”