With files from Ian Hamilton/Riderville.com

SASKATOON — Vince Young’s professional football comeback remains on hold, as Chris Jones announced Monday that the quarterback has suffered a torn hamstring and could miss up to six weeks.

Saskatchewan Roughriders head coach-GM Chris Jones revealed Monday that an MRI conducted recently in Toronto showed that Young had a torn hamstring. The 34-year-old quarterback suffered the injury during a training-camp workout June 6 at Griffiths Stadium.

“He’ll have to take it easy and get it well and then we’ll see where he’s at when he gets it well,” Jones said following Monday’s workout at Saskatoon Minor Football Field.

Jones wasn’t sure how long Young would be inactive, but noted his layoff “is looking four to six (weeks) right now” because the damage was “a lot worse than what we envisioned.” 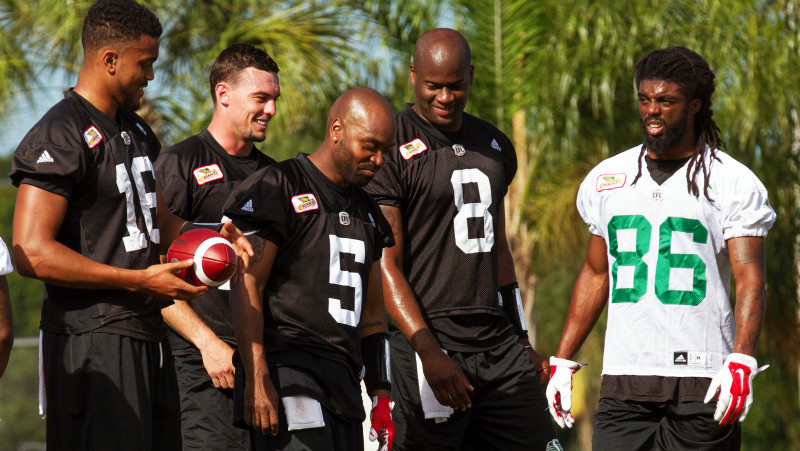 Vince Young is pictured along with Kevin Glenn and Brandon Bridge during Riders’ mini-camp (Riderville.com)

Despite his NFL experience, Young is considered a CFL rookie. As such, he can be released without any obligation on the Roughriders’ part if they choose instead to make that move.

On Saturday, Brandon Bridge started at quarterback as the Riders and Bombers played to a 25-25 draw in the first game at new Mosaic Stadium. Expected opening day starter Kevin Glenn did not play, while Bridge mostly split playing time with Bryan Bennett.

Young’s signing back in March caused quite a stir around the CFL, the 33-year-old having spent nine seasons in the NFL after being drafted third overall by the Tennessee Titans in 2006.

Before joining the Riders, Young’s football career had been sidelined since 2014. From 2011 to 2014, Young spent a season each with the Philadelphia Eagles, Buffalo Bills, Green Bay Packers and Cleveland Browns but never saw any playing time with the latter three.

You had his ups and downs at the Roughriders’ mini-camp in Florida in April and was still adjusting to the CFL game through the first two weeks of training camp. He was injured while scrambling out of the pocket during a drill June 6 and left the field with a trainer.

“It’s disappointing that we didn’t get to see him in the pre-season,” said Jones, whose team completes its exhibition slate Friday in Vancouver against the B.C. Lions. “It’s an easier time to be able to evaluate someone in a real game situation …

“He’s a proud guy and he’s going to meet it head-on. He’s in the training room and he’s doing everything that our trainers ask him to do to try to get well and try to compete.”

Young also could return to Texas to continue his rehabilitation.

The Riders wrap up their pre-season slate on Friday in Vancouver before traveling to Montreal to face Darian Durant and the Als in the season-opener on June 22.