From chin up, Edmonton Eskimos running back Travon Van looks like a regular guy.

From neck down, his body is a tapestry of tattoos.

“Everything besides my thighs. I have my ankles, down to my legs, my back, my neck, my arms.”

A free agent acquisition of the Eskimos in February, Van set a goal to cover his five-foot-11, 205-pound body with tattoos when he was growing up in San Diego. 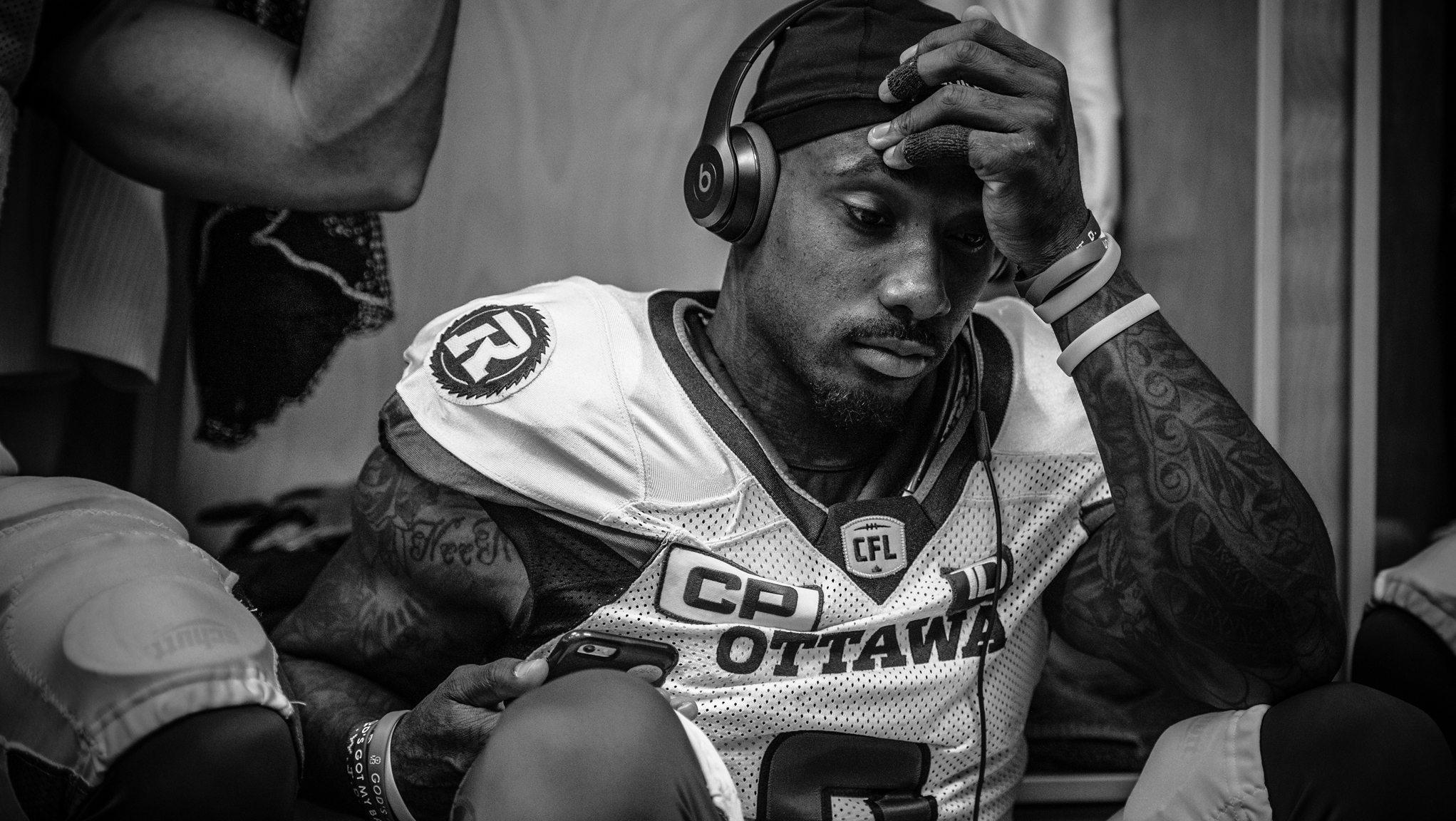 A member of the REDBLACKS in 2016, Van has almost his entire body covered in tattoos (Johany Jutras/CFL.ca)

“My next door neighbour had a lot of tattoos, he rode a motorcycle, he taught me how to play pool. He was a pretty good dude when I met him,” Van said.

Does Van also ride a motorcycle?

“Actually, I ride dirt bikes, not motorcycles,” he said. “I ride a little bit with my best friend, Tyler Churchill. He competes in San Diego. I just follow him around and ride the practice bikes. I’ve been riding a few years now and I’m getting better, but I don’t want to compete because that increases the chances of getting hurt. I try to go out there and pick up a little speed, but not too much.”

Getting back to the tattoos, why are Van’s thighs still untouched by ink?

“I heard they’re a little painful and I’m not too good with that kind of pain,” he said. “Everything else was painful, but it was kind of manageable.”

The only other place on his body that’s an open canvas is his face.

“I told my mom I wouldn’t touch the face,” he said.

Obviously, Van’s mother was concerned about her son having permanent markings on his face like former heavyweight boxing champ Mike Tyson, but otherwise her attitude was she could live with the body artwork if that was the worst thing he was doing and he was happy.

Van’s favourite and most meaningful tattoo is Michael Jackson’s Thriller album scene, including zombies, across his entire back. He had it done as a tribute to the entertainer after the King of Pop passed away in 2009.

“It’s pretty nice,” he said about the massive tattoo that took his tattoo artist three sessions to create. “I’m the one who doesn’t like to sit there too long, so he knows the most he probably has me for is two hours and that’s it.”

Van has done the “shading” on three tattoos that were already outlined on his legs, but wouldn’t consider tattooing someone else “because I don’t think my work is that good.”

“It’s kind of like colouring,” he explained about shading. “If you think about it, you’ve been colouring since elementary school, so I just try to learn from (his tattoo artist) and then go do it myself.”

Because Van, one of five running backs in the Eskimos training camp, doesn’t want to use what little free space he has left on his body, he has probably received his last tattoo.

Van played 12 regular season games during the past two years with Ottawa, including nine last season, plus the 2016 Grey Cup game. An Achilles injury to running back William Powell in training camp opened the door for Van to be the starter last year, but he sprained a medial collateral knee ligament the second week and sat out the next six games. He missed last year’s East Division Final against the Eskimos because Ottawa opted to dress an extra import defensive back instead of two import running backs.

“It was a great experience, being around Hank (now-retired quarterback Henry Burris) and watching him lead,” Van said about his time with the REDBLACKS. “It was something I won’t forget.”

Even though he’s impressed with veteran Eskimos running back John White – “Man, he’s good. I’ve been learning so much just watching him run (during training camp). The way he can jump-cut is really good.” – Van didn’t hesitate to join the Green and Gold when Edmonton head coach Jason Maas contacted him early in free agency.

“I always wanted to continue playing for him,” Van said about his offensive co-ordinator with Ottawa in 2015.

Van led the Eskimos with seven carries and 46 rushing yards during Sunday’s CFL pre-season game against the Calgary Stampeders on The Brick Field at Commonwealth Stadium. He also caught a pass for four yards.