Like No Other: The headstrong, brilliant and playful presence of Don Matthews 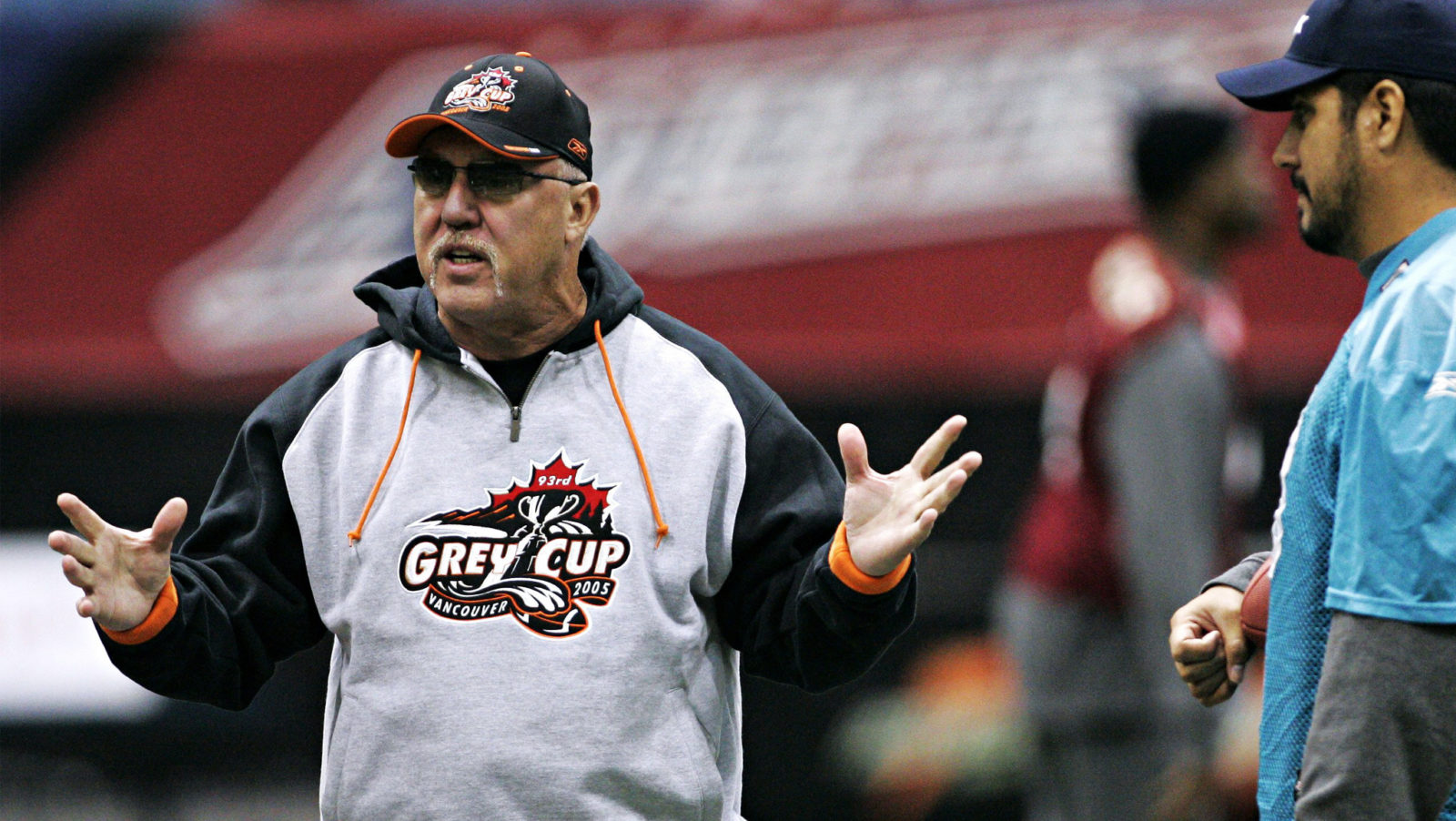 Like No Other: The headstrong, brilliant and playful presence of Don Matthews

There are a lot of words that can be used – that have been used – to describe the late Don Matthews, the nearly peerless monarch of an era in Canadian football who passed away just shy of his 78th birthday, after a long battle with cancer. A complicated person, Matthews could inspire and infuriate, be approachable and distant, often all at the same time.

Yes, there are many words that apply when painting a portrait of “The Don.”

First and foremost, you need to use the word “dominating” to characterize a football life like few others.

Five times he was named CFL Coach of the Year. Ten times he won the Grey Cup, as either an assistant coach or a head coach. Second only to Wally Buono in career victories, Matthews guided teams to 231 of them since taking on his initial head coaching role with the BC Lions, in 1983. What followed were 11 division championships and nine Grey Cup appearances. Along the way, Don Matthews either delighted or frustrated most every step as he ascended the gridiron mountain. Fans either loved him or loved rooting against him. Passionately.

He was, without question, one of the most gifted and memorable personalities in the history of the Canadian Football League.

“Everything about [Don], there was a mystique. He had a way with players in that they just believed they were the best. That was his magic. Making players believe there was no way they could lose.”

If two people can have opposing views of the man who defined and re-defined Canadian professional football again and again over the course of three decades, on one thing they absolutely must agree; the man from Massachusetts was one of the greatest coaches to ever walk a sideline in the CFL and one of the sport’s great innovators, managers of schemes, and football talent.

On that point there can be little room for opposing views and even those that found themselves on the wrong side of Matthews’ personality would find it impossible to argue the toss. And there were many who found themselves on the wrong side, temporarily if not permanently. That was the thing about Don Matthews. His brilliant football mind was kept company by a mercurial personality, with more than a handful of behind-the-scenes arguments and conflicts playing out, when blustery clashes would prevail over friendly discussions.

He knew what he wanted and he would get it with either sugar or vinegar.

“There were different layers to him, I think,” said David Watkins, who served as the Toronto Argonauts’ Vice President of Business Operations back when the club was winning consecutive Grey Cups under Matthews in 1996 and 1997. “The players’ coach. The front office adversary.”

“Everything about him, there was a mystique,” said Jim Barker, the long time CFL coach and executive who won Cups with Matthews in both Toronto and Montreal. “He had a way with players in that they just believed they were the best. That was his magic. Making players believe there was no way they could lose.”

Matthews created an atmosphere whereby his players would wade through a river of flames for him. That was for two reasons. One, because he treated performers like gold, knowing full well the value their execution meant to the bloating of a coach’s resume of successes. Two, Matthews was never very far away from dismissing a player if he thought a younger buck had a half a step over the incumbent. The message seemed clear: Perform for me and you’re a king. Don’t and we’ll part ways quickly, no need to waste each other’s time.

Oh, and there was one more factor, according to Watkins. “If the front office said one thing and the player said the other, he was gonna side with the player.

“He would do certain things that would show that despite the fact he was an older guy versus the players’ ages, that he was one of them,” Watkins added. “That everybody was in it together. A unifying force, as a coach, that I haven’t seen anyone else really have.”

On the field, Matthews helped key the splendid defence of the Edmonton Eskimos’ great dynasty of 1978-1982, when he served as Hugh Campbell’s defensive coordinator, bringing fresh ideas and a knack for putting great players in the best possible positions to shine. It was a mutually beneficial relationship as legendary players like Dan Kepley and Dave Fennell – to name just two – helped his star rise. As a head coach, Matthews ended the Lions’ Grey Cup drought in 1985, the first of his championships as a field boss. He is credited with being the architect of a number of other successes and innovations over the years as well.

In the mid-nineties, while with Toronto, Matthews ushered in the dawn of a new way to deploy both offensive and defensive troops. “That whole concept of having a running back/receiver at that inside receiver (position) was Don,” said Barker, remembering it was Matthews who took running back Pinball Clemons and used him in what was a fresh, new way.

At the same time, Matthews adjusted on the other side of the ball, moving defensive back Marcello Simmons up into the linebacker position, to address the need to better cover pass receivers, while retaining a certain amount of run-stopping ability. Today, that is business as usual; every team does that. Twenty years ago, it was a different – and some thought foolish – way to structure a defence.

“The guy was just genius,” said Barker, who also noted that it was Matthews who – in his mind – rescued quarterback Anthony Calvillo from the scrap heap, in Montreal, when deciding to move the struggling veteran from under centre to back in the shotgun formation.

The apparent ease with which Matthews could game plan for an opponent is something for which Barker retains an immense respect. You can hear the disbelieving admiration in his voice.

“You’d spend all night coming up with these elaborate schemes and he’d sit on the toilet in the morning and come up with something better,”
laughed Barker. “He would walk in and say ‘okay, here’s what we’re doing.’ Invariably, the things would work.”

Media conferences and scrums were sometimes a little unsettling as Matthews could go from a smile to a scowl in quick fashion. He seemed to enjoy landing what he considered a pretty good line but he could also fix a reporter with a stern look and a lecturing tone if he thought the question was beneath him. Once, during the 1996 season, I asked him how good a linebacker Reggie Givens was becoming for the Argonauts. “He’s not a linebacker,” Matthews admonished. “But he calls himself a linebacker,” I replied. Matthews had other plans for Givens. “Does he now,” he growled before turning to take a different question. 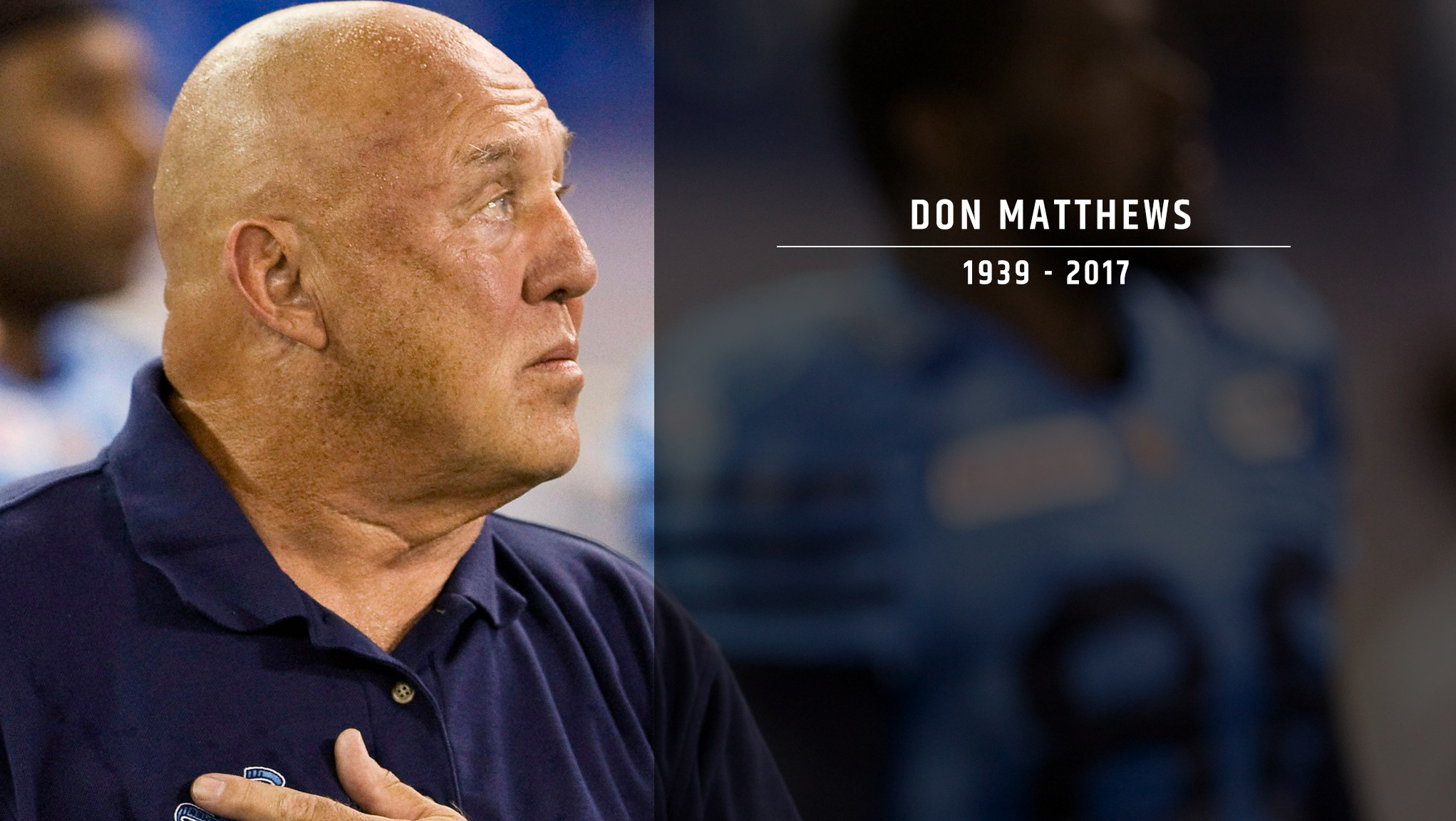 “When I came in, I was a linebacker,” laughed Givens, remembering how Matthews converted him to rush end when Mike O’Shea joined the team half way through the season. “He could look at a player and say ‘you know what? You’re more than just a linebacker.’ He thought outside of the box.”

“I loved the fact that he treated us like men,” added Givens, supporting the notion that Matthews placed trust in his charges, asking only for performance. “He had fun like we had fun. He enjoyed every win like we would enjoy a win. He was like a coach that played the game with us, if that makes sense.”

If Matthews found a common bond with his players, it was not always so with the front office. He was, in some ways, a one-man show and could give the people who hired him a devil of a time over the things he wanted for his team, demanding that things flow through him.

“He was known for his temper,” said Watkins who added that Matthews’
unpredictability kept him on his toes. Recalling one snafu when it came to road accommodations for the team in Vancouver, Watkins said he was sweating out the inevitable conversation he’d have to have with the coach about it. Instead, Matthews simply told him it wouldn’t be a problem because he wouldn’t let it be one. “On that occasion I was ready for the gale force wind and it turned out to be the gentle Don,” said Watkins.

There was one thing of which Watkins said he could always be certain; Matthews, ever the flamboyant showman, never had a problem with marketing.

“He was always game for whatever promotion we wanted to run,” said Watkins. “Often times, coaches aren’t the ones to sell tickets. But Don could do it.”

When asked to talk a little about the personal side of his relationship with Don Matthews, Barker admits that, as well as they got along and as much as he respected his boss, he didn’t get to really, really know him.

“He didn’t let a lot of people into his personal life,” said Barker, echoing another sentiment about Matthews that has often been expressed.
That he remained a private person. “We would never discuss his personal life. I think I knew him as well as anyone because I was with him through his good times and some bad times.”

Even if Barker did not get to know Matthews so well, personally, he is crystal clear about what he meant to him. He calls Matthews “by far” the most influential person of his football life. “For me, he’ll always be mentor number one and I was so lucky to get to spend as many years with him as I did.”

“He took things that were really hard and made ‘em easy,” said Barker.

Because of that, we can readily assign Don Matthews, the coach, a rightful position in the lore of the game even if we cannot so plainly label the man’s persona.

His complicated mind was simply one of the greatest the CFL has ever seen.