Steinberg’s MMQB: A tribute to the untouchable Don Matthews 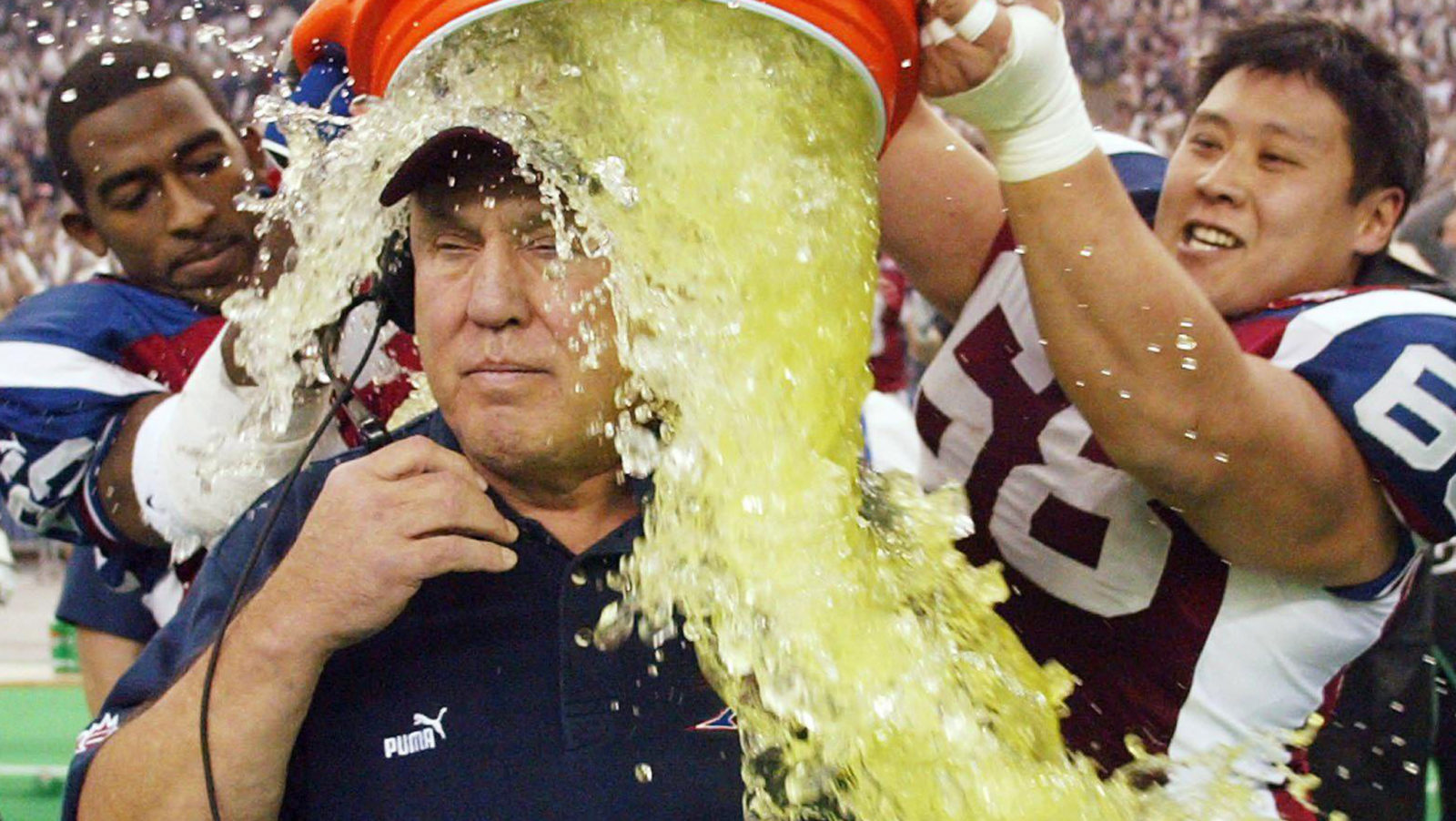 Steinberg’s MMQB: A tribute to the untouchable Don Matthews

As the CFL, and the football world as a whole, continues to mourn the loss of Don Matthews, I thought we’d kick off this week’s Monday Morning Quarterback by appreciating one of the best we’ve ever seen. As Matthews leaves us, he’s left an indelible mark on the league and the sport; that’s evidenced by his spot on the all-time wins list, which will almost certainly never be touched.

The most exclusive of clubs

The sport lost a true character and innovator with the passing of Matthews. That’s why I’m so glad his spot on the CFL’s wins list is locked in, because it means for decades to come, we’ll be able to tell the stories of just how good a coach Matthews was.

With 231 career wins, Matthews sits second all-time behind only Wally Buono. Thanks to his success at virtually every stop and his longevity, Matthews should be, and will be, remembered as one of the two or three best to ever coach football in this country.

When it comes to wins, Matthews will be remembered in an exclusive class of just two coaches to ever win 200 games or more. Buono is at 266 and counting while Matthews finished his career at the aforementioned 231. Just think about how untouchable Matthews is in second place for a moment, because I don’t think anyone will ever approach the heights he and Buono have attained.

MORE ON ‘THE DON’
» CFL mourns the loss of Don Matthews
» Landry: Matthews was like no other
» The Waggle: Remembering Don Matthews
» The Snap: ‘What time is it? Time to get busy!’ 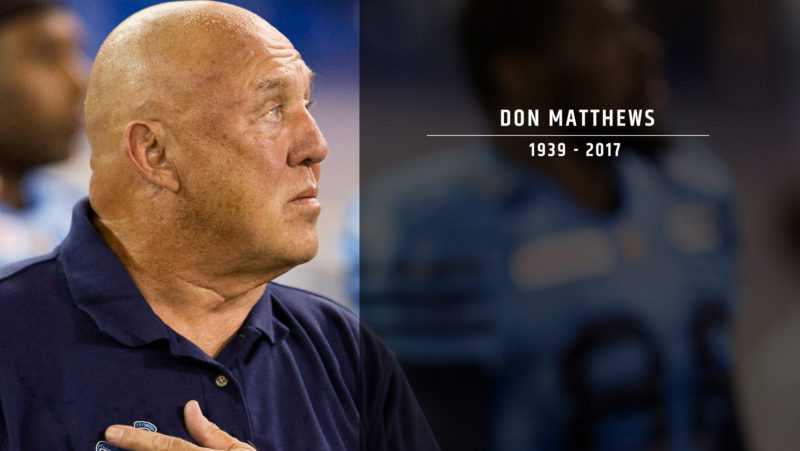 At 231, Matthews has almost 100 more wins than the legendary Frank Clair’s 147. He’s almost 200 wins clear of the CFL’s active leader Marc Trestman, who has 59 career wins to his name. For a little context, it would take Trestman between 14 and 15 seasons at his career average of 12 wins per season to be on par with Matthews.

Or take Dave Dickenson, who had one of the best coaching debuts in CFL history last year, as he led the Stamps to a 15-2-1 regular season record. At an unsustainable, dominant pace like that, it would still take more than 14 seasons to get to where Matthews is. The fact is, longevity and sustained success like Matthews isn’t something we see anymore.

Sure, he was a character and a great ambassador for the league, but Matthews wasn’t a CFL head coach for 20 years by virtue of those things alone. Other than a short stint with Edmonton in the late 1990’s, Matthews was extremely successful in every one of his five stints as head coach. His football acumen stood the test of time and translated from team to team. That’s such a rare thing to possess in this day and age.

Now is not the time to debate the ultimate order of the CFL’s greatest coaches. The time for that will come, and it will be an arduous task I’m sure. To rank greats like Matthews, Buono, Clair, Hugh Campbell and Ron Lancaster is no easy task and would draw myriad opinions. But what you can’t dispute is Matthews’s place in the conversation for the greatest of all time. It’s not an arguable point.

Years down the road when I’m teaching my kids about the long and storied history of the CFL, I’m glad Matthews’s name will remain right near the top of the all-time wins list. No one is catching Buono for number one, the same way no one is tracking down Matthews for number two on the list. Records are meant to be broken, but sometimes it’s good when they’re not.

There’s justifiable excitement surrounding the start of the season in Toronto. After all, with Marc Trestman and Jim Popp in the fold, the new era is alive and well. But success for the Argonauts in 2017 revolves so much around quarterback Ricky Ray and, with so much inactivity over the last two seasons, I’m really not sure what to expect.

Ray has started 11 combined games over the last two seasons thanks to a combination of injuries. With no disrespect meant to a living legend, that is a little worrying for a 37-year-old with so much on his shoulders this season. 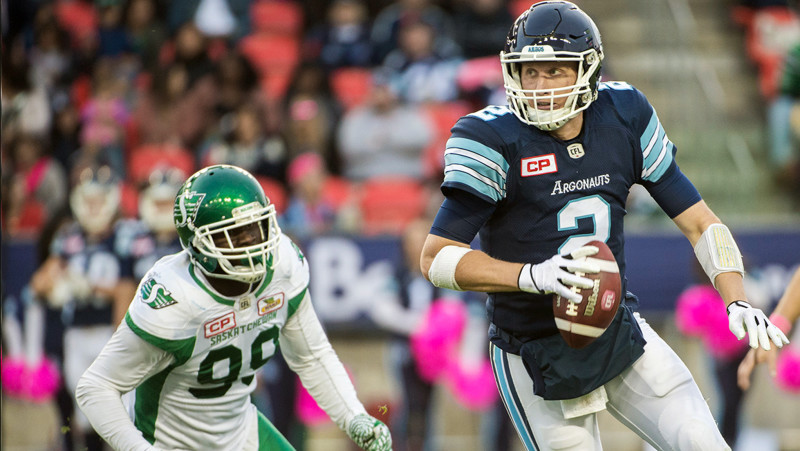 With Drew Willy cut loose, the Argos don’t have an experienced quarterback to take the reins if Ray finds himself on the sidelines for any stretch of time. Jeff Mathews has had his moments in this league, and looked good specifically in Toronto’s pre-season finale, but to have him forced in at the helm is a risky proposition.

And it’s not like we have a lot to go on from Ray’s pre-season, either. In two games for the Argos, Ray threw three passes and that’s it. Of course, that’s by design: Ray is a veteran, has earned the right to watch exhibition affairs, and he’s not in dire need of the reps in game action. But it doesn’t give us observers a whole lot to go on.

There are reasons for optimism. First off, we are talking about Ray. He’s one of the best quarterbacks of the last 20 years and has been pretty darn effective in his limited action the last two years. If you’re worried about the injuries over the last two seasons, remember Ray started 17 games in 2014; there’s recent evidence he can stand up to the physical rigours of a long season.

Oh, and there’s Ray’s new head coach. The aforementioned Trestman comes in with an impressive offensive resume from his prior CFL stop in Montreal. There, Trestman and quarterback Anthony Calvillo hooked up for one of the league’s most dynamic offences for five straight seasons.

Calvillo spanned the ages 35 through 40 in his years with Trestman and added “ageless” to his Hall of Fame resume. Ray turns 38 in October and if Trestman can have similar success with a veteran pivot in Toronto, the team’s outlook will end up looking far more positive.

History repeating itself with Trestman and a veteran quarterback is best-case scenario, but it’s an attainable one. Knowing that veteran quarterback is Ray, and knowing how driven he is to put the last two seasons behind him, I’m fascinated to see how things pan out. That doesn’t change the fact so much of Toronto’s 2017 success rests on Ray’s shoulders, and the fact there’s unknown involved makes this a story to watch all year long.

I won’t lie, I was hoping Vince Young’s hamstring injury would end up being a minor one and not require him to miss extended time. Alas, that wasn’t to be, and the Saskatchewan Roughriders were forced to release their high profile quarterback over the weekend.

It really is a shame, because I wanted to see if Young could come close to recapturing some of the magic we had seen from him prior. Even if it were one or two moments in spot duty in the pre-season, Young had the potential to provide excitement. Instead, we won’t get the opportunity to see him throw a CFL pass in game action, at least not for now. 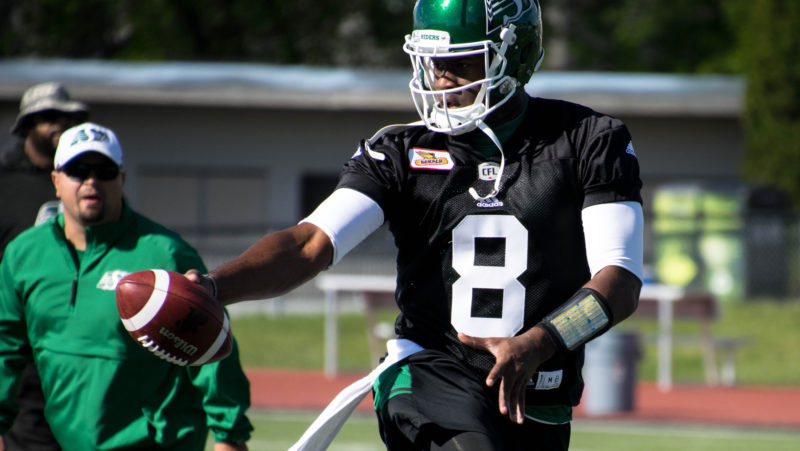 The Riders said goodbye to Vince Young, announcing his release on Saturday (Riderville.com)

More than that, though, I feel bad for Young. It’s not like he joined the Riders for a ride on the gravy train. Young was committed to resurrecting his career, making Saskatchewan’s roster out of camp and learning the Canadian game. Reports out of Regina suggested it was a tough adjustment, but that Young was progressing and things were starting to click more and more.

But to have his opportunity cut short due to injury is unfortunate and unfair. Pro sports aren’t fair, we all know that, and the Riders had no choice but to go in a different direction. Any other team would have done the same thing, and Young knows that. But it doesn’t change how frustrating it must be to have the decision taken out of his hands.

I’m not sure what the future holds for Young, but I hope he gives it another crack, whether it be in the CFL or elsewhere. Sask brought him in for a reason and there’s a chance they might be willing to revisit down the road when Young’s hamstring has healed. Regardless, Young, like so many others, deserved a second chance. And he still does.