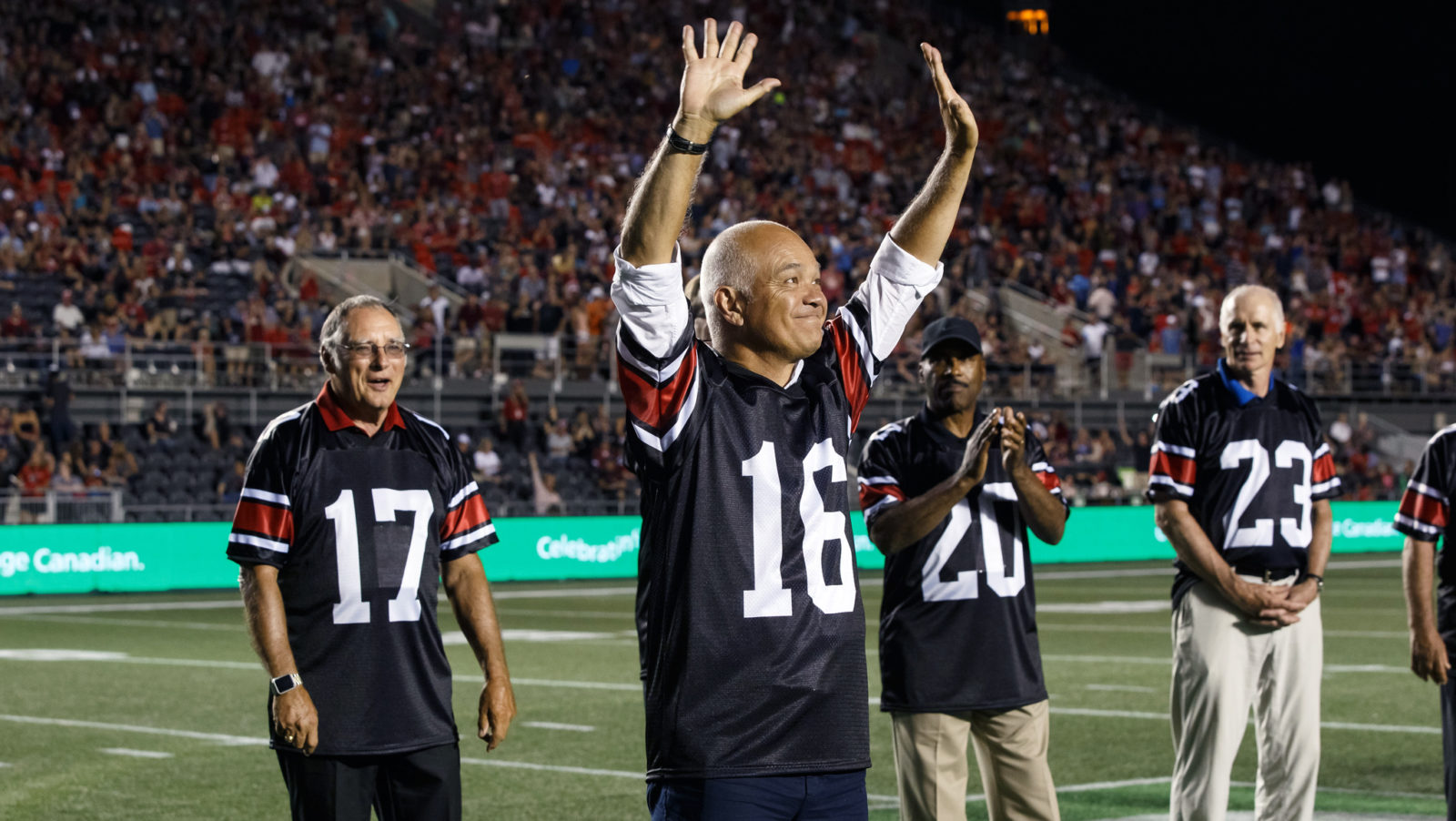 Once the ball went up, Bill Hatanaka took a breath and surveyed it all.

There were 12 men in the green of the Saskatchewan Roughriders galloping down the field, playing in the 1976 Grey Cup at Exhibition Stadium in Toronto, their eyes all zeroing in on him. In front of him were 11 of his Ottawa Rough Rider teammates, their numbers shrinking as they ran to the middle ground. The bodies started to collide in front of Hatanaka and the most chaotic part of football was upon him. But before the 21-year-old rookie caught the ball, he was in a different place.

“When the ball was up in the air, to me it was a beautiful thing to watch that ball cruising through the autumn sky. I felt very calm and very cerebral,” Hatanaka says as he sits comfortably in his Rosedale home in Toronto.

“Until the ball came into my arms. At that particular point,” his voice raises here for the first and only time in an hour of conversation, “there’s only a moment to make the play happen. It either happens or it’s not there at all. You’ve got to find the opening and you’ve got to get there immediately and go. It’s either there or it’s not. That’s what I learned over the years.”

RELATED:
» Celebrating the CFL’s greatest Canadians
» Dalla Riva: From the steel mills to the Alouettes
» Steve Daniel takes us inside CFL stats

It was there for Hatanaka that day, on November 28, 1976. Almost 41 years later he breaks down the play from memory. The ball bounced and he immediately went left as he pulled it in. He saw a teammate fly by for a block and got in behind it. He came through the seam and saw clear daylight up the field. He followed the opening and as he looked to his right he saw every one of his teammates forming a wall up the sideline for him. His 79-yard touchdown run is the third-longest punt return in Grey Cup history. It’s also the first one scored in a Grey Cup game.

“I dove over the goal line, looked up and it was pure pandemonium,” Hatanaka says. “It was so much fun to experience that moment with my teammates. But I always remember I was one of 12 who made that play happen.”

While the rest of the players selected by their teams to have their names on commemorative t-shirts through Canada Day weekend had careers that were at least a decade long, Hatanaka spent just four years in the CFL, retiring after the 1979 season to begin a career in finance. His selection by the REDBLACKS pays tribute to him being a key part of an Ottawa Grey Cup-winning team, but also acknowledges a very successful life led after he left the game.

“There are so many things we learn in football,” he says, looking back to playing sports all year as a kid growing up in Scarborough, then playing football at York University.

“I learned how to expand my notion of self to include my teammates. I learned that when one of my teammates was doing well, that generally meant positive things for me. I think expanding my notion of self to incorporate the broader team was a great learning experience. All of those things, I was able to transition into my working life. They’ve all been very instructive as to how I’ve conducted myself and what I’ve deemed to be important as I’ve moved through the ranks of business.” 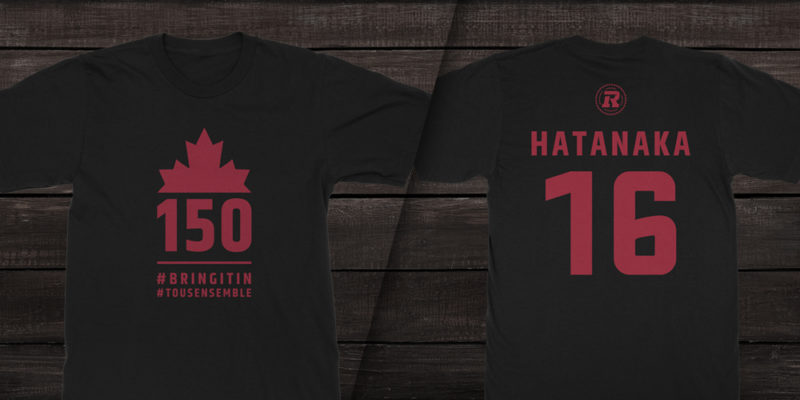 Hatanaka has also used his day-to-day life experiences to promote diversity and inclusion in his workplaces. While he was a senior executive in charge of Global Wealth and Asset Management at TD Bank, he also became the inaugural chair of TD Bank’s Diversity Leadership Council. Outside of work, he has volunteered with the Canadian Centre for Diversity, York University, The United Way and is a senior advisor with The Japanese Canadian Cultural Centre.

“I’ve had an intense interest in diversity my whole life,” he says.

In watching his mother, he grew up learning to see the world through other peoples’ eyes.

“If my mom was going to visit somewhere, quite often the day before we would go to that place and map out the path so that we could make sure that it was accessible in a wheelchair,” Hatanaka says.

“I realized very quickly at work, when you’re promoting career opportunities for persons with special needs, how demanding it is for many of them to get through their activities of daily living. You have to incorporate that. They’ve got extra stuff to do.”

Growing up in his Japanese-Canadian home, he also began to learn what his mother, father and others in their community went through in internment camps during World War II.

“Both of my parents were interned during the war and relocated into interior BC. They were relocated to eastern Canada after the war,” he says. “They came with nothing and had to rely on the goodness of others to get by

“Although I had a very happy life growing up, through the eyes of my parents I was able to witness extreme examples of prejudice, of intolerance, of racism and involuntary relocation that many communities are forced to endure.”

Learning of these things has impacted Hatanaka deeply.

“My parents had every right to be angry. Instead they painted for me…a picture of triumph over adversity. They showed me what it means to overcome obstacles and barriers on the road to success,” he explains.

“Basically, their community had everything taken from them. They collectively chose to rebuild and to stick and stay in Canada. They committed to doing the work necessary to create a foundation for the next generation to be able to prosper. That is an extreme gift for one generation to give to another.”

Hatanaka has done the same for his family. He and his wife, Jan, have two sons, Bobby and Ryan-James, who are in their early 30s. They also have identical twin daughters, Abigail and Victoria who are entering university in the fall.

Hatanaka jokes that Jan, his redheaded Irish-Canadian wife, is the visible minority in their home.

His family life has been a continuation of exploring diversity. Through their daughters, the family has learned about twins, about adoption and about the challenges of the hearing impaired.

He’s excited about the world that his sons have entered into and what his daughters are on the verge of joining.

“I think that our next generation is fortunate in that many of the barriers that we experienced have been challenged. My kids don’t see colour,” he says.

“Most Canadians today are open, accepting and interested in learning about other cultures, other religions, people from all over the world, men and women. They have a very inclusive view towards diversity.

“One of the things we say in our household is: Refuse to be categorized. If a football player can be a business person; if a kid from rural northern Ontario can become a PhD in theology like my wife; if a kid from Edmonton (like his son) finds his way to Cornell, and a kid enters university in Economics and is now an actor in New York (like his second son)…refuse to be categorized.”

For Hatanaka, so many of those lessons and his beliefs were validated through football.

“One of the things that I love about football and professional sport in general is that it’s about excellence,” he says.

“It’s ‘How can you pick up your teammates when they’re having a difficult time?’ It’s ‘How can you win as a team? How do you lose as a team?’ All of those life lessons are what an individual can get from sport at all levels and that’s one of the reasons I love participating.

“Striving for excellence enriches all of us.”