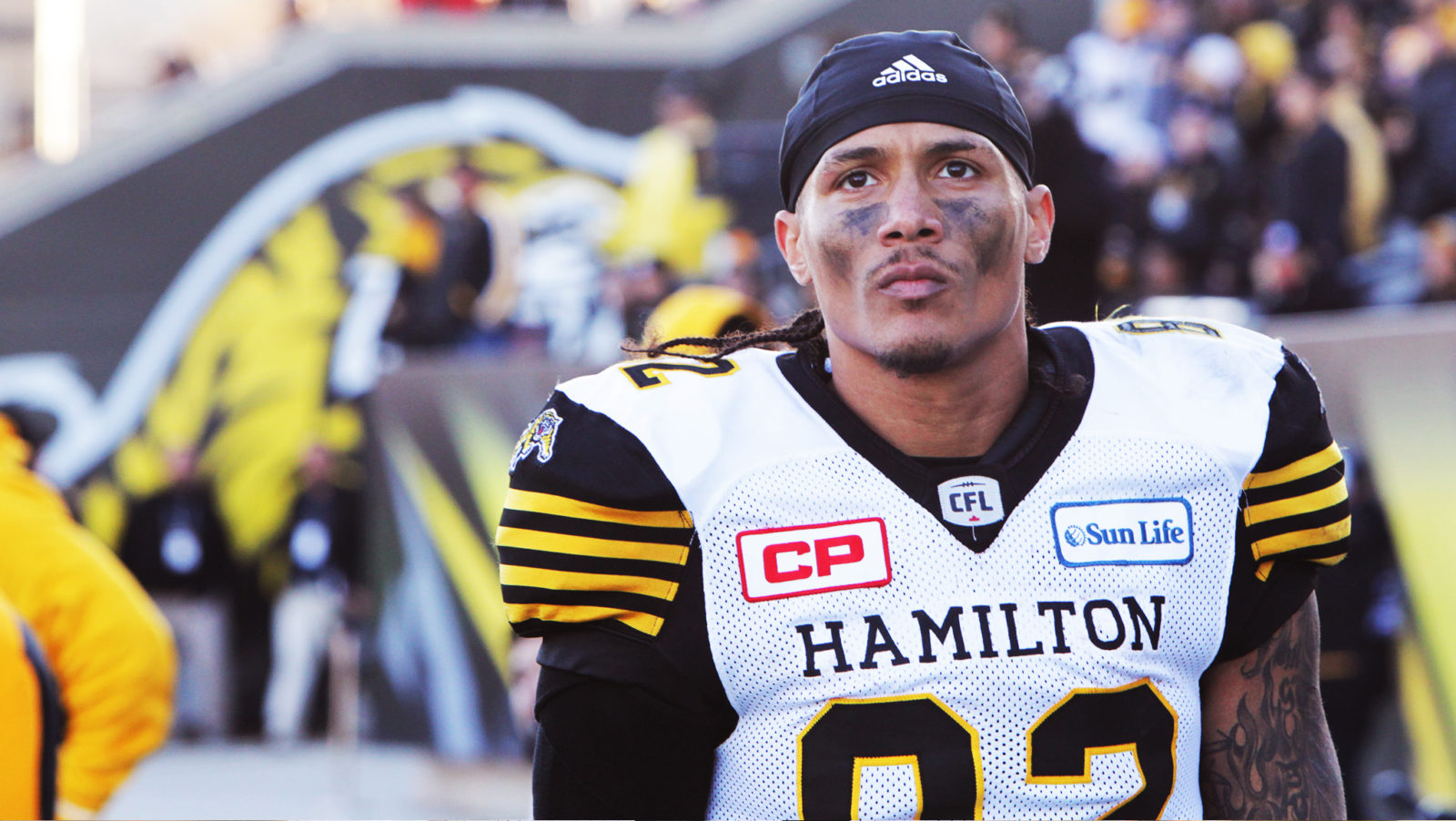 Going on four years later, Brian Tyms still remembers it all, even if he couldn’t hear anything.

He was a 24-year-old rookie with the Cleveland Browns (proof that the football gods can both bless you with an opportunity and laugh at the same time). When he and his teammates ran from their locker room out onto the field at Arrowhead Stadium in Kansas City, they said goodbye to the spoken word for the day.

“The Chiefs were 8-0 and that’s the loudest I’ve ever heard,” the Hamilton Tiger-Cats receiver said on Thursday afternoon. “We couldn’t even communicate. Everything had to be hand signals.”

Tyms and the Tiger-Cats have spent this week readying themselves for something similar in Regina, at New Mosaic Stadium against the Saskatchewan Roughriders. Artificial crowd noise has been pumped through the speakers of Tim Horton’s Field all week and non-verbal communication has been stressed.

Most of the Ticats haven’t been inside the new stadium yet, but they no doubt gleamed from watching tape of the Riders’ OT loss on Canada Day to the Bombers just how loud it can get in there.

Speaking with Bo Levi Mitchell on his radio show this week, Bombers QB Matt Nichols said that it was one of the first times in the CFL he had to use a silent cadence.

Tyms is ready for it.

“I like unspoken communication better. I feel like it’s quicker and you can adjust quicker,” he said.

“The moment you turn your head and see some green in the stands is when he signals something and you’ll miss it. We’ll be all right. We’ll link up together like we’ve been doing and make sure everyone knows their stuff.” 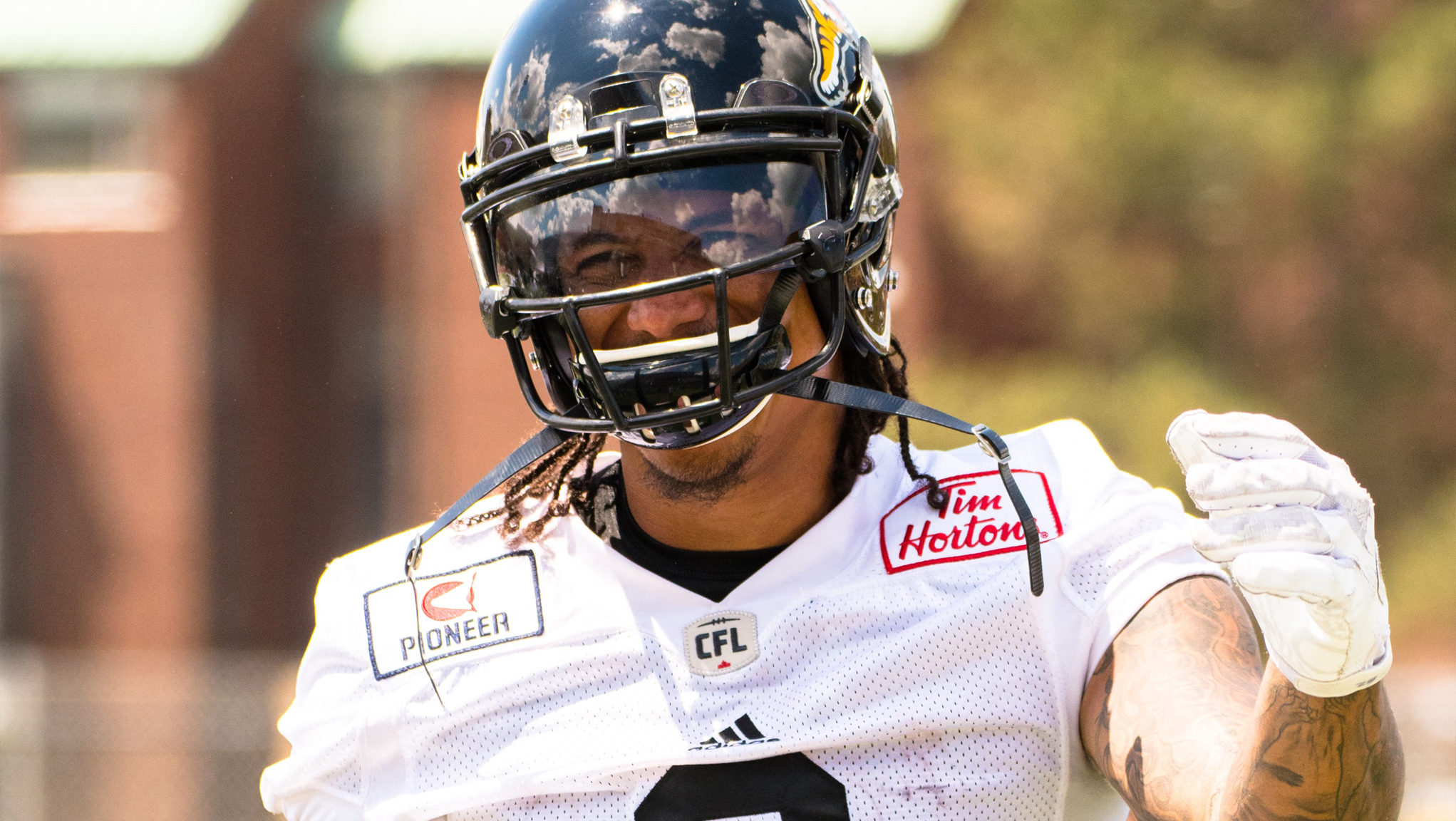 Sophomore receiver Brian Tyms shares a laugh at Ticats practice where he now takes on a larger role in the Hamilton offence in the wake of a season-ending injury suffered by WR Terrence Toliver.

Saturday’s game in Regina gives Tyms a big (and loud) stage to play on. After losing wide receiver Terrence Toliver to a knee injury in Week 1, Tyms has taken his spot in practice. Ticats’ coach Kent Austin said on Thursday that he’ll look at a lot of options in his offence as the team goes about trying to replace a 1,000-yard pair of hands in its roster, but the opportunity isn’t lost on Tyms.

“My heart goes out to him because that sucks, man, especially (getting injured) on the first game’s series,” Tyms said. “He’ll work hard and he’ll be back, but I’m just trying to pick up where he left off. He was here a couple years before me and I’m just trying to bring the same intensity, the same consistency and just make plays, really.”

Austin has spent the week watching Tyms settle in at the new spot. After playing slotback on the same side of the field as Toliver in Week 1, the move to the wide receiver spot has been one of growing understanding, confidence and comfort. With that, Austin said, comes the efficiency that he’ll need from him.

“He’s filling in now, but we’re open,” Austin said. “We’re moving the pieces around and seeing what gives us the best combination.

Hamilton fans got a glimpse of what Tyms could do last season. He signed in late October and got into the regular-season finale. He started in the East semi-final last year against Edmonton and had eight catches for 114 yards. He had five catches for 19 yards in Week 1.

After Toliver went down, Tyms spent the bye-week in Hamilton kept it business as usual, trying to make the most of his opportunity.

“During the season there is no bye week. For me, that’s the way I look at it. I’m trying to be the best receiver so I’m not taking any days off,” he said. “I didn’t go anywhere. I kept my same schedule. Came in here about eight, took care of my body, lifted, ran, caught jugs, went and watched film and went home after that. I never stop. I don’t.”

He’s looking forward to whatever he can or can’t hear on Saturday.

“I would expect them to come out guns blazing, hitting hard, talking a lot, the fans getting into it. I expect everything, that, you would probably expect if it was an NBA Finals game, you know what I mean?” he said.

“They haven’t won, it’s a new stadium, a big fan base that’ll be there on their side. We have to come to play, be crisp, be precise and consistent. The rest will take care of itself.”