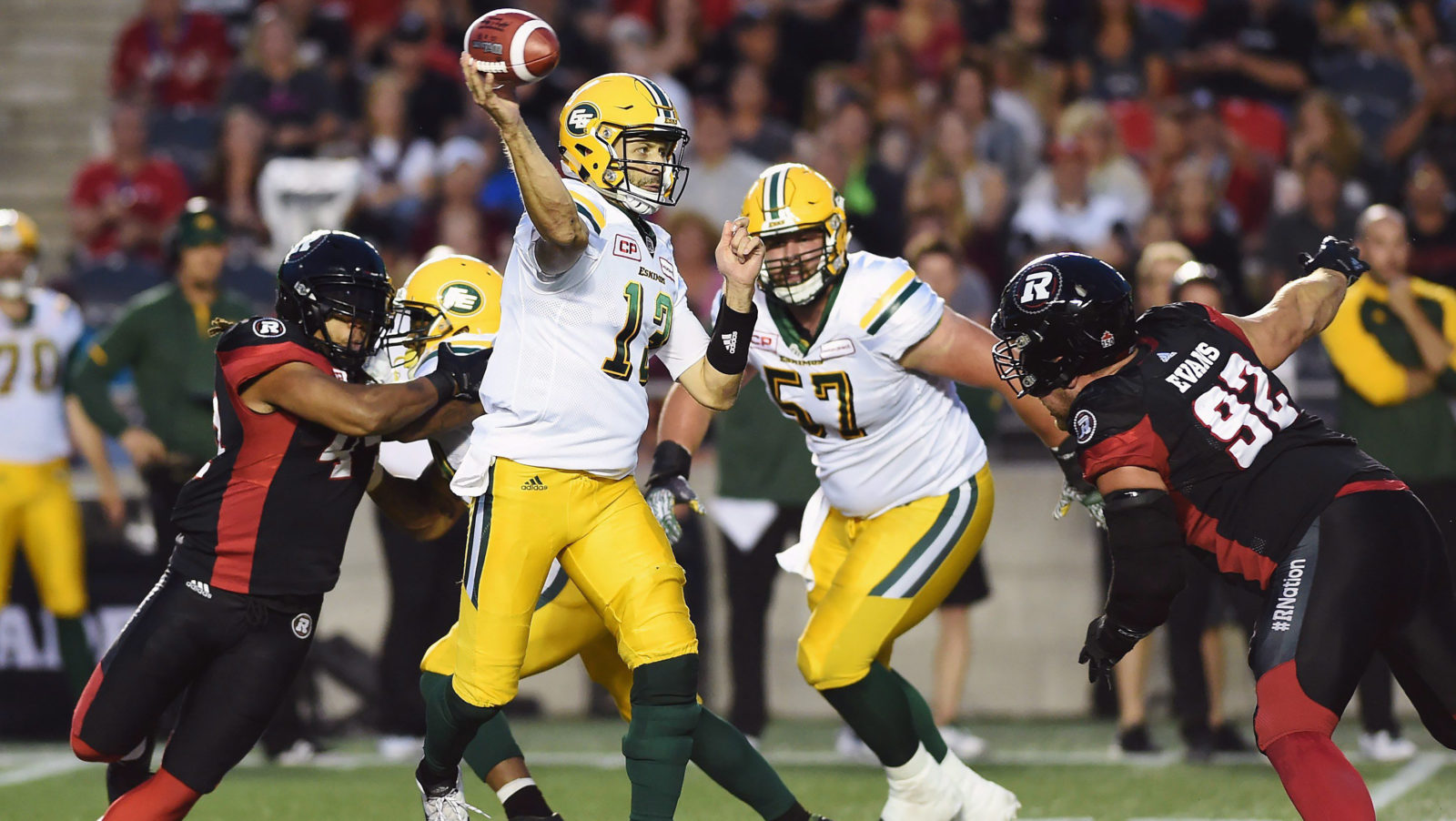 OTTAWA – The Edmonton Eskimos arrived in Ottawa with a perfect record, and they made sure it stayed that way when they left.

Mike Reilly threw for two touchdown passes and 384 yards as the Eskimos added yet another notch in their undefeated belt Thursday night, tallying their seventh consecutive victory to open the 2017 season.

The Esks wasted no time in jumping out to a lead on Thursday night, scoring on the game’s first drive. Reilly looked calm as he dissected the REDBLACKS defence, finally finding RB LaDarius Perkins who dodged a tackle and sprinted 35 yards for the score.

After the Eskimos defence forced an Ottawa punt, Reilly got back to work on the first play of the next drive, launching a bomb to WR Kenny Stafford, who took it 69 yards to move deep into REDBLACKS territory. The two would have hooked up for the touchdown just two plays later were it not for a phenomenal defensive play by DB Imoan Claiborne.

The Eskimos carried a 10-point lead into the second quarter after dominating the first frame, racking up over 170 yards of offence through the air and shutting down the REDBLACKS offence.

Eskimos K Hugh O’Neill kicked home his second field goal of the game to give the Eskimos a 13-point lead early in the second half.

After being stymied by the Eskimos for much of the first half, Trevor Harris and the REDBLACKS offence came alive early in the second. Harris found a couple of his favourite targets in WR Greg Ellingson and SB Diontae Spencer to move inside the 10-yard line, before finishing the drive with a fade to Ellingson in the left corner of the end zone for the touchdown.

After a quick defensive stop it looked like KR Quincey McDuffie had given the REDBLACKS their first lead of the game on a spectacular return, but a blocking penalty brought Ottawa back to their own 30. Undeterred, Harris and the offence picked right up where they left off, and Maher’s field goal pulled Ottawa within three.

The two squads traded field goals to end of the half, as the Eskimos held onto a narrow three point lead.

Ekimos K O’Neill stayed perfect on the team’s first drive of the second half, kicking home his fourth field goal of the night.

Harris continued his success through the air on the REDBLACKS next drive, finding Josh Stangby down the left sideline for a big gain. Just a play later, Harris went to the opposite side of the field, going over the top to find Diontae Spencer in the back of the end zone. Maher’s convert gave the REDBLACKS their first lead of the game.

After penning the REDBLACKS deep into their own territory, an errant punt from Maher gave the Eskimos solid field position, and Mike Reilly made them pay. With SB Chris Getzlaf wide open in the left corner of the end zone, Reilly made no mistake, and after running in the two-point convert himself, the Eskimos led by seven.

The REDBLACKS could find no answer the rest of the way, as their comeback attempt ended with an interception deep in Eskimos territory.

Next week the REDBLACKS head to Hamilton to take on the Hamilton Tiger-Cats in an important East Division matchup. The Eskimos will head back to the West Division, where they’ll take on the Blue Bombers in Winnipeg..