Behind the Celebration: A surplus of creativity in Riderville

Behind the Celebration: A surplus of creativity in Riderville

It’s fun to watch receivers make catch after catch that you can’t help but say, ‘how did he do that?!’

And it’s fun to see a quarterback make an impossible throw look possible.

But you know what’s the most fun of all? What comes after scoring a touchdown. 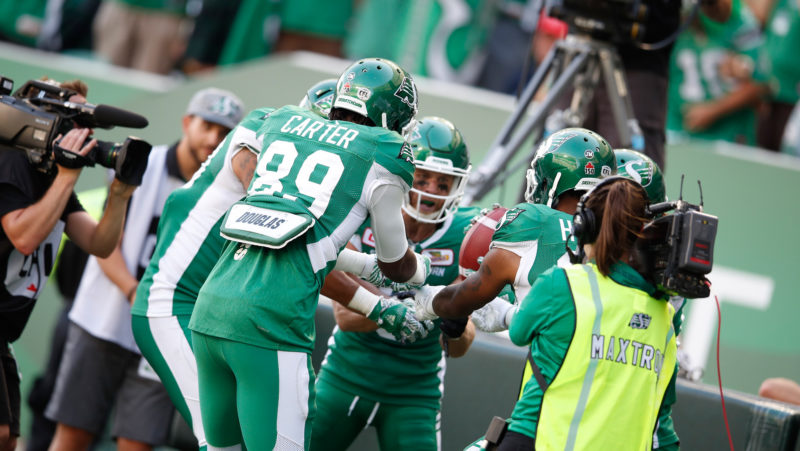 The celebration after a player scores has to be one of the most fun parts of football. I mean, sure, the touchdown itself was probably pretty great but when you see an offensive lineman pick up a receiver and hold him over his head like he’s Simba from The Lion King? That’s really great.

Most players have their signature celebrations – perhaps it’s a ball spin or their favourite dance move – but the Saskatchewan Roughriders pass-catchers have taken things to a whole new level.

This season, led by Duron Carter, the Riders receivers have put together some interesting and unique celebrations when they find the end zone.

Check out this compilation of some of their celebrations from Riderville.com. I like The Airport Terminal and The Quiet Time the best.

| There’s no shortage of creativity in Riderville…

Not since the early 2000s have we seen such creative celebrations in the CFL.

I’m sure you remember the Calgary Stampeders team that brought to life The Bicycle, The Bobsled and The Relay? Jermaine Copeland and none other than Nik Lewis were involved in those ones.

And now it’s the Riders getting in on the action.

So where do the ideas for their celebrations come from?

“The celebrations, to tell you the truth, they really come from just anybody,” Carter admitted. “We’ll be in the locker room and we’ll be joking around or we’ll see something on TV on TSN, and anything that comes in our head, we’ll choreograph and get it done.”

In order for a celebration to come to life on the field, each and every receiver has to agree. If not, it’s scrapped and they move on to the next idea.

“Everybody has to approve of the celebration,” said Carter. “There can’t be one guy that’s like, ‘oh no, I don’t like that one!’ Everybody approves. And it’s all the receivers whether it be me or Naaman (Roosevelt) or Bakari (Grant). Anybody that comes up with the celebration we all have to approve and we’re all going to do it 100 per cent.” 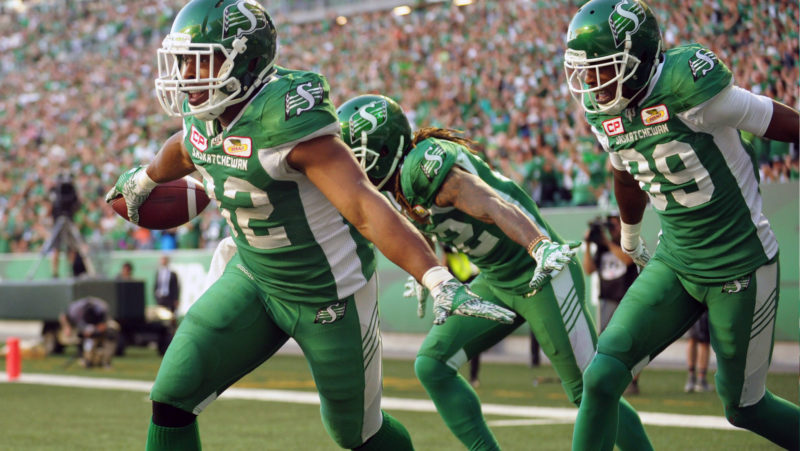 Sometimes, however, the idea doesn’t come from the locker room. A few weeks ago when the pass-catchers debuted The Flying V, it wasn’t a Roughrider who came up with the idea at all. Carter was talking to a fan along the sidelines during warm up and the fan told Carter about how he thought it would be cool if they paid homage to the movie The Mighty Ducks and did The Flying V.

He brought the idea to the receiver group, they were all on board and voila, the celebration was born.

Last week against the Edmonton Eskimos, the Riders had plenty of opportunity to showcase their celebrations.

First, after a Roosevelt touchdown, the crew lined up on the goal line, pretended to jump in a pool and swam.

And then, after Carter scored his own major in the fourth quarter, he pretended to throw a curling rock and the rest of his receiving group were the sweepers.

“I can take credit for that one,” Carter said when asked who came up with the curling idea. “That one was mine! I saw some curling on TSN earlier in the day and I’m just like, ‘man, I know that’ll be a great CFL celebration. I got together with everybody and everybody was down for it and we made it happen.” 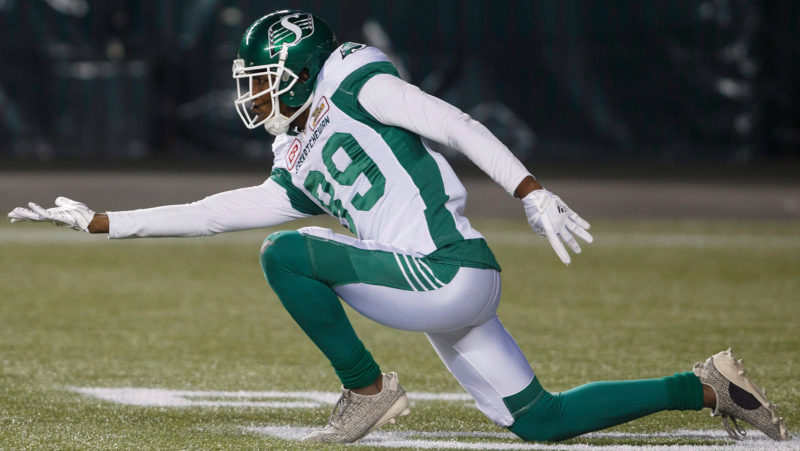 The offensive line in Rideville is also getting in on the fun, doing somersaults after Vernon Adams scored his first touchdown as a Rider last week.

“I didn’t even know! They had a planned celebration with Vernon (Adams),” said Carter. “Vernon scored, I’m going to give him his first Riders touchdown ball and he gives it right to the O-lineman and they do somersaults. I was completely taken aback. It was crazy! I’m glad that our whole team is getting into it. Our defence is trying to get some too now.”

So can we expect more celebrations this week against the Blue Bombers?