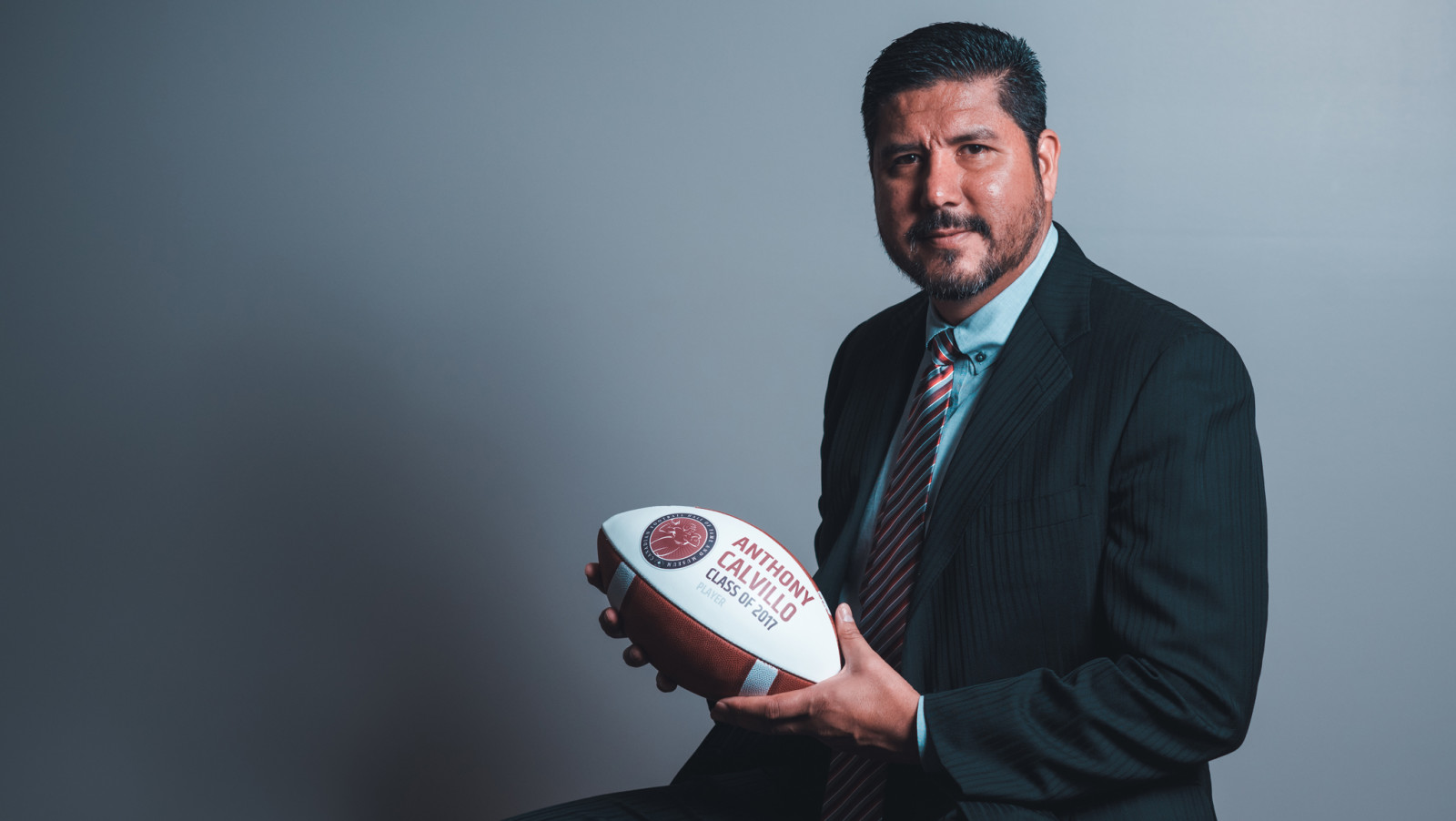 Statistically, Anthony Calvillo didn’t have much of a chance.

Never mind the odds that any quarterback faces coming into the CFL, first of landing a starting job, then building a 20-year, record-setting Hall of Fame career. Those odds steamroll dozens of young hopeful quarterbacks across this league every season.

That Calvillo got his foot in the door of a pro football career is remarkable in itself.

As a kid growing up in La Puente, California, Calvillo was surrounded by gang violence. Home was at times of little refuge. His father battled alcoholism and was abusive to his wife for the first 13 years of Anthony’s life, often with no regard for him or his two brothers. The odds are that kind of environment will swallow up a kid without mercy and spit it out fractured and spiralling down the wrong path in life.

It got his brother, David, who joined a gang but ensured it stayed away from his brothers. He ended up serving eight years of a 16-year sentence for attempted murder.

With a minefield of pitfalls around him, Anthony Calvillo avoided them all, played his way into a spot at Utah State University and eventually into the greatest offensive career that professional football has ever seen. He goes into the Canadian Football Hall of Fame as pro football’s all-time leading passer, with 79,816 yards.

“I was a young kid in terms of where I grew up and what I saw, whether it was domestic violence in our household, whether it was us dealing with local gangs in the area,” Calvillo said.

“I was always just a very quiet person. Always kept things to myself and always kept my emotions inside. Whatever was happening around me, to me it was just a part of my life. It didn’t affect me where it was going to stop me from doing the things I wanted to do and that was going to school and playing sports.

“Anything that was going on in my life, I just stored it in the back of my mind and buried it there and moved forward.”

As he grew into his role in the CFL — he came into the league with the Las Vegas Posse in 1994 and spent three seasons with the Hamilton Tiger-Cats before finding a home with the Montreal Alouettes in 1998 — Calvillo handled any adversity that came his way in the same manner.

When it didn’t work out for him in Hamilton as he tried to find consistency as a starter, he stayed quiet. When he worked alongside Tracy Ham in Montreal, he paid attention to what the fellow Hall-of-Famer did and tried to emulate it. And when he finally did establish himself as the starter people thought he could be and the wins, the long playoff runs, the Grey Cups and the awards started to pile up, Calvillo didn’t change.

“That helped me later in my career when I was dealing with adversity, whether it was struggling on the field, or it was the media talking about my performance, I didn’t care,” Calvillo said.

“My whole life I had to deal with certain things and I just kind of stored it in the back of my mind and did not let that define who I wanted to be. I think growing up the way I did and handling adversity the way I did, helped me into not only in my professional life, but my personal life as well.”

The two intersected in Edmonton on November 28, 2010. After winning the third Grey Cup of his career, Calvillo announced in his post-game press conference that he had to have half of his thyroid gland removed, after doctors found cancer on it earlier in the season. At 38, he had treatment in the offseason, signed an extension with the Alouettes and played the final two years of his career. All of this three years after his wife, Alexia, fought and defeated b-cell lymphoma.

In going through his wife’s battle he learned a lot about the disease, which helped reassure him that winter.

“I waited until of course the end of the season to get it done, but during that whole time, if it was going to be positive, I knew this wasn’t a life-threatening cancer, based on the information that was given to me, plus I (already) knew so much about it,” he said.

“I just kind of stored it in the back of my mind, once again. Once I got closer to the end of the season I think that’s when I started to realize, ‘I’ve got to get this thing fixed.’ I really had football as a distraction.”

Back in March, when the Hall of Fame class was announced during Mark’s CFL Week, Calvillo walked around the reception with a smile stretching far across his face. The white-panelled football that he was given for a photo opp stayed tucked under his arm the entire night. There’s something about that kind of night that makes any inductee, whether they’re in their early 40s or their 80s, look like a little kid again. It’s a magical thing.

“When I was playing, all the accomplishments that we were gaining here in Montreal, you enjoy it but at the time I didn’t really appreciate it until my career was over,” Calvillo said. He thought back to when he was that quiet, life-hardened young man, trying to find his place in a league that was completely foreign to him.

“When you start the process of being a professional quarterback, you don’t think you’ll ever get to be an established quarterback, play for 20 years or even get into the Hall of Fame,” he said.

“I remember coming into the league and seeing Ron Lancaster’s name as No.1 all-time passer. At that time he was at 50,000 yards and he played for 19 years. I thought, ‘That’s insane. How can someone play for so many years?’

“I wonder if the young people, when they come in and look at the numbers that I put up, that Damon Allen put up, and they wonder, ‘My goodness, are those numbers reachable?’ Those things crossed my mind. It’s one of those fun things to sit back and think we did some fun things for Montreal.”