Who Would Be Your CFL Wrestling Tag-Team Partner?

Who Would Be Your CFL Wrestling Tag-Team Partner?

Maybe it’s the size of the players, or their tendency to say or do cartoonishly ridiculous funny things, but to me it’s always easy to find similarities with the CFL and pro wrestling.

The reminders come in different forms. On Monday, it was Ottawa beat guy extraordinaire and CFL talent-provider Tim Baines (his son Mitchell plays for the Ticats) who posted some vital info about goings-on in the Lansdowne area in November.

The Aberdeen Pavilion (at Lansdowne Park) will also have five days of @IMPACTWRESTLING TV tapings from Nov. 6-10.

1. Are there open tryouts?
2. If you had to pick a Redblack as a tag team partner who would you go with?

It got the wheels turning here in the CFL office. Say that you returned home after a long day and found out that your entire family was being held hostage by an evil pro wrestling conglomerate. The only way you could get them back is to team up with a CFL player of your choosing and win a tag-team match.

The stakes couldn’t be any higher (this slightly edges out a loser leaves town match). Who do you roll with?

After some serious thought, I’d go with Edmonton offensive lineman Matt O’Donnell. He’s the perfect combination of size — six-foot-11, 350 pounds — power and agility that would compliment my slow, weak self. I’d go with Henry Burris as our manager. He’d be great on the mic and is enough of a physical presence that he could impact the match if those sorts of shenanigans are required (anything to get my family back).

Here are some other picks from around the office:

I WOULD be impartial, even with another @MSUBobcats in the ring. Gotta earn it!

Kyle Scott, our video production supervisor, really thought it through.

“John Chick – dude has a motor, which will make up for my lack of athleticism and cardiovascular training. PLUS he’s a family man,” he says. “He’ll appreciate the weight of the situation.

“Team manager is Jason Maas, because in a pinch he’s tossing me a chair or screaming at the official while my partner jumps the rope and stomps my opponent a few times.

We posted the question to you all on Twitter. Here are some of your best responses.

I’d go with size, @SirV55 as my wrestling tag team partner. If I could grow a beard, maybe Jon Gott and I could form a villainous faction.

Hank would be great, but I’m going with Jerrell Gavins or @INTREPIDITY_BG as my wrestling manager. Great talkers. Old school WWF – Slick.

Definitely @KuntryKane205 – simply for the promos and trash-talk!

I know I’m late to the party but me and Willy would kill it!

@6BONECRUSHER3 without a doubt

Odell Willis; since I can’t fight my way out of a wet paper bag, I’d like to know my partner had a mean streak & used to fighting 2-3

If you’re taking belli, Ed Phillion has got to be his tag team partner.

I mean the correct answer is Odell Willis, right?

Rickey Foley, you want a big boy DL that can move.

We may not win, because I’m a giant ball of soft flesh, but @JeffHecht24 and I could team out of the Bray Wyatt stable. #beards

Ted Laurent. The Cookie Monster! After his finishing move, he’d rub his belly.

Of course, there are a number of former CFLers that could play themselves in the ring, too.

Angelo Mosca, Jack Adkisson (Fritz Von Erich), Merced Solis (Tito Santana), Brian Pillman, Bill Goldberg, Lawrence Pfohl (Lex Luger) Dwayne Johnson (The Rock) and Joe Anoa’i (Roman Reigns) have all made stops in the league before moving on to fame in the squared circle. Mosca did a bit of both, wrestling in the CFL offseason before his career in the ring took off after he retired from football in 1972. 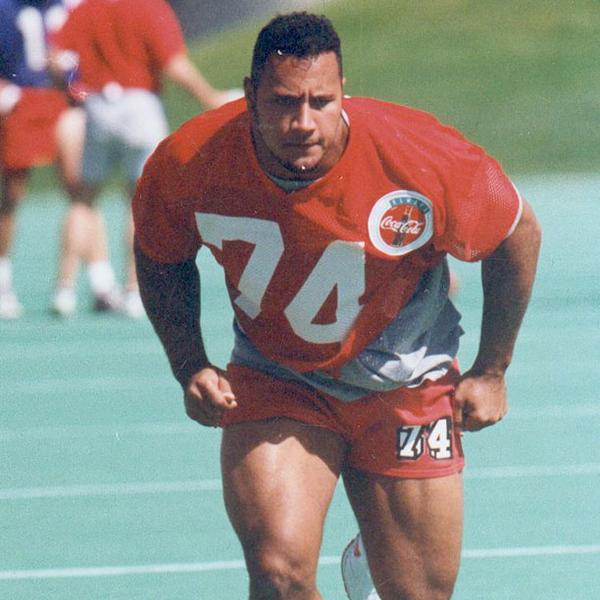