Strong words from south of the border reverberated all the way up to the CFL over the weekend.

On Sunday, the Saskatchewan Roughriders linked arms on the sideline at Mosaic Stadium during the playing of O Canada. Over the last few days, players across the league have been speaking up to reporters and on social media about their displeasure with U.S. president Donald Trump’s comments at an Alabama rally on Friday night.

Trump called players that kneel for the U.S. anthem sons of bitches and said that they should be fired. The Associated Press estimated that on Sunday, upwards of 130 NFL players sat or took a knee through the anthem of nine games. NBA teams have railed against Trump’s comments to Golden State Warrior Stephen Curry, as he un-invited the defending champions from visiting the White House (Curry said earlier on Friday that he didn’t want to go to the White House).

On Saturday, Oakland A’s catcher Bruce Maxwell became the first player in MLB to take a knee during the playing of the U.S. anthem.

With so many Americans playing an important part in the success of the CFL and the firestorm of emotion that Trump has drummed up through his Twitter account, the spillover crossing the border isn’t surprising.

“It was just a sign of unity that we’re together,” Riders QB Kevin Glenn told reporters after the game in Regina.

“Sometimes people don’t understand that we have to go back to that kind of stuff. We’re here for six months (during the season) but then we have to actually go back and live in that. That’s why we did it.”

The Riders organization released a statement of support for the players on Monday.

The Saskatchewan Roughriders have released an official statement: pic.twitter.com/88YasPcVI4

A year ago, when then-San Francisco 49ers QB Colin Kaepernick took a knee during the anthem to protest racial inequality in the U.S., it seemed unlikely that the movement would reach the CFL. That hasn’t happened here, yet, but CFL commissioner Randy Ambrosie released a statement on Monday on the topic.

“We cherish our anthem because of the values it has come to represent. One of those values is freedom of expression. Regardless of whether we liked it or agreed with it, we would absolutely respect our players’ right to express their views in this way, which is peaceful and does not disrupt our game in any way.

“If the words ‘true north strong and free’ are to be truly celebrated, we must honour their meaning, not just their singing. We say this in a sincere and heartfelt attempt to be faithful to those who over the years have fought and sacrificed for our freedom by supporting, in the present day, the exercise of that freedom. 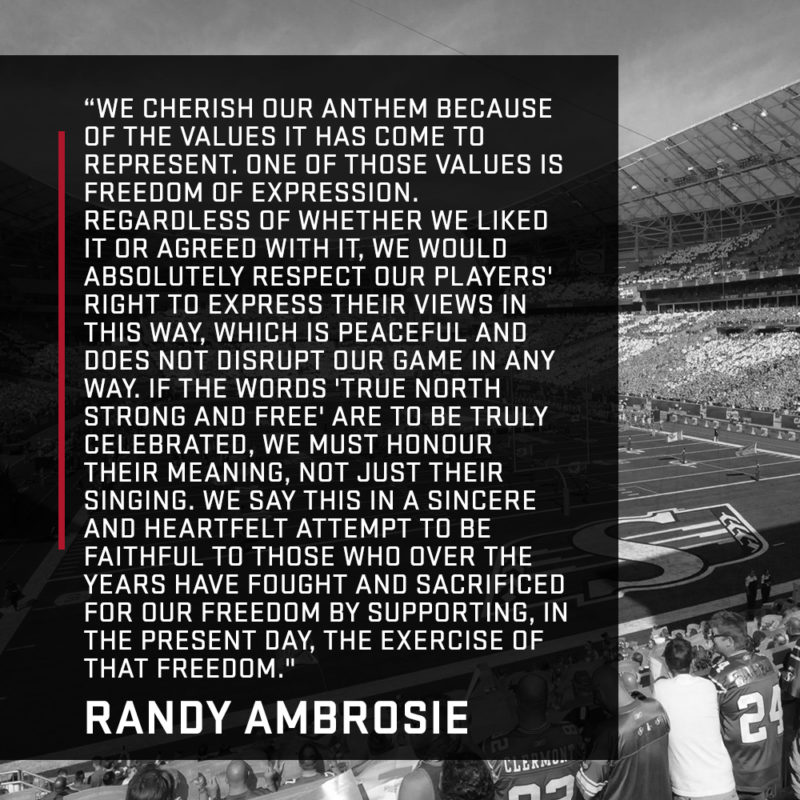 “That was unnecessary,” Dennis, a Queens, N.Y. native told Riderville.com.

“That’s not what our thought process was. It was just a way for us to show solidarity and show support for our brothers and our families back home that we understand what’s going on and we’re not blind to it.”

Argos defensive back Matt Black has followed Trump’s presidency closely all year and had an active eye on what was happening this weekend.

Oppression at its finest! https://t.co/N9FeLGQiQt

So when u see a problem, u should run from it and not try to fix it? Where should they go? I suggest stay and make it better for ALL! https://t.co/r8qgIurDqy

“It’s sad and it’s disheartening to me as an American to see our president getting in bickering matches with people on Twitter, calling out athletes saying they should be fired,” Calgary quarterback Bo Levi Mitchell told reporters in Regina after the Stamps’ win.

“I’m glad we’re all uniting against that and I hope we take a stand against something that is unacceptable.”

“It’s more about unity than anything else,” Calgary defensive end Charleston Hughes said. “This is about being united as brothers to stand up for one another. It’s not just about the NFL or just about the CFL. It’s about standing up for what is right and showing support.”

“It shows that people understand the social issues that are going on right now,” Dennis said on Sunday. “With Trump’s comments the other day, it showed us that we’re really alone as an ethnicity in America. It hurts.”