HAMILTON — It what has been a season filled with drama, the Hamilton Tiger-Cats were able to put to bed any speculation surrounding their interest in Johnny Manziel — at least for now.

On Wednesday morning the CFL stated that it would not file a 2017 contract for Manziel with the Tiger-Cats or any other team but would be “eligible to sign a contract for the 2018 season and, if Mr. Manziel meets certain conditions that have been spelled out by the Commissioner, the CFL will register that contract.”

What this means for the long term few know but in the short term, it allows June Jones, Kent Austin and the rest of the Ticats brass to remove distraction and focus on a stretch run may indeed have some significance.

“In arguably the most tumultuous season in modern Ticats history the team have finally found their feet on solid ground over the last month after appoint a new head coach in June Jones, defensive coordinator in Philip Lolley and quarterback in Jeremiah Masoli,” CFL.ca analyst Marshall Ferguson said.  “The possible acquisition of Johnny Manziel could have re-opened the media can of worms and unnecessary attention which plagued the team through much of the summer. 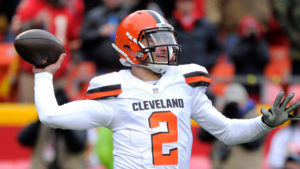 MORE ON MANZIEL
|| STATEMENT: League will not file contract for Manziel in 2017
|| READ: Manziel tells ESPN’s Schefter he had positive meeting with CFL, Ambrosie

The Ticats began the season 0-8 and seemed all but out of it.  However with wins in three of their last four contests and a mix of injuriee and inconsistency plaguing Ottawa and Montreal, Hamilton is still in the mix to catch one of the (likely) two Eastern playoff spots.

Many questioned the Ticats’ decision to put their offence in the hands of Masoli but Ferguson believes although the hype is different, he and Manziel carry a similar skillset.

“If you take the name off the player and don’t compare what he used to be to what you think he will be you realize that the Tiger-Cats already have a quarterback who is mobile slightly undersized and can frustrate you or drop your jaw with an amazing throw on any given play … his name is Jeremiah Masoli,” Ferguson explained.

“Manziel has also not been in football period while Masoli is a veteran of both June Jones’ run and shoot offence and the ‘Cats system. Manziel was simply not necessarily the golden ticket to the playoffs or a return to Grey Cup glory.”