We’ve already seen it eleven times this season – not to mention the times Jeremiah Johnson decides to treat us to it when he doesn’t find the end zone.

It’s his touchdown celebration, a dance that has more meaning than you may know. It’s something special between him and his wife. A way for him to connect with her during his games. And it was born during a vacation the pair took about six years ago.

Jeremiah can also sing – I can attest to this because he sang part of Despacito by Justin Bieber to me over the phone during our chat. It. Was. Epic.

And why would he choose Ronnie Yell as the teammate he’d take with him if he was stranded on a deserted island?

Find out of all this, and much more, in this edition of TMI! 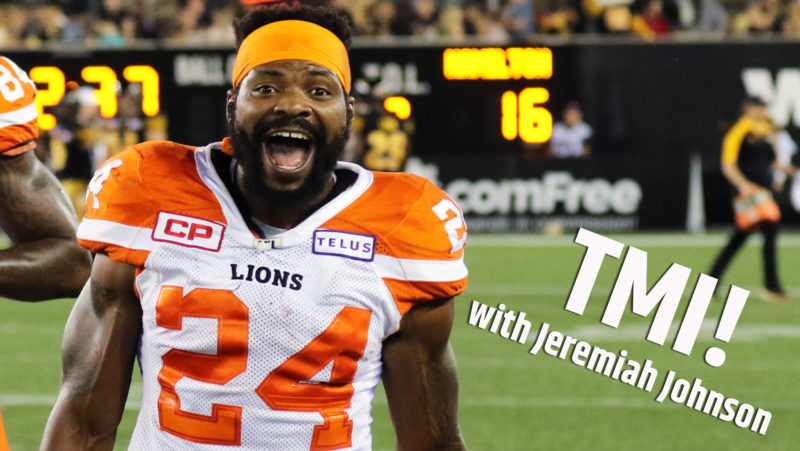 Kristina Costabile: Tell me something that fans might not know about you.

Jeremiah Johnson: I am a good singer. I sing to my wife and my kids every day. That’s one of my silent passions.

KC: What kind of songs do you like to sing?

JJ: I like to sing a lot of gospel songs, a lot of R&B songs, anything that I can make my own.

KC: What’s the story behind your touchdown celebration?

JJ: About six years ago, me and my wife went for a vacation in the Dominican Republic and there was a dance contest at the local, little club there at the resort. We were there dancing and then the DJ stopped and said, ‘we’re going to host a dance contest!’ We were kind of forced into doing that dance contest, there was about 15 competitors along with us. We went through like five rounds. A lot of people were cheering and applauding. If you got the most applause you won. We were dancing really well and then the last one it was a married couple that were from Argentina and we were kinda intimidated because they were doing their ‘ole ole ole’s and all these chants and stuff. We were kind intimated but we just went out there doing our dance. Me and my wife pulled apart for a little bit and just did that (the celebration). I pretty much just told my wife, ‘that’s my dance. That’s what I’m going to do in the end zone!’ It was more of an inside type of thing with my wife. Pretty much just paying homage to her and her heritage and our culture. 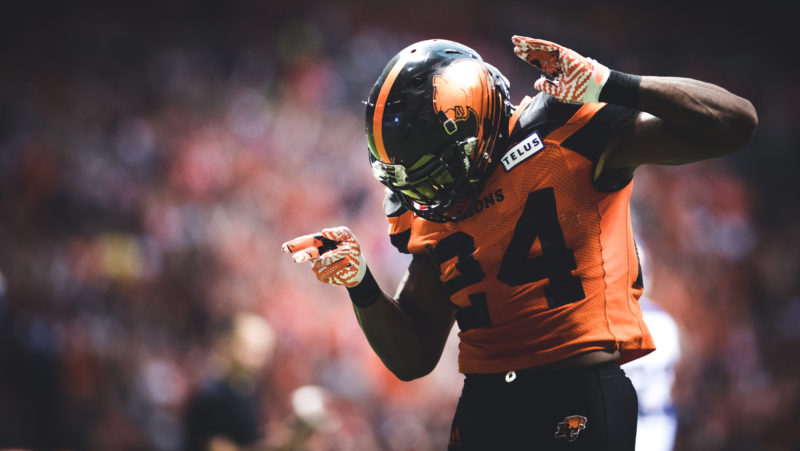 KC: What is on your pregame playlist?

JJ: I’m more of a vibe type of guy. I don’t have favourite artists to listen to. I kind of just grab my Spotify and hit shuffle. I just like to hear something that’s low melo, a nice beat, not a lot of screaming, not a lot of cursing and things like that. Just kind of keep it cool and keep my energy level at an even keel.

KC: Which one of your teammates would you want to be stranded on a deserted island with?

JJ: Ronnie Yell. Me and him mesh well, so there wouldn’t be a lot of fighting. When we’re together we just stay copesetic, we have fun, we talk and chill. He’s a go-getter type of guy, just like me, going out there on a stranded island I know that we can find some food and get some good stuff!

KC: If you were on that island, what three things would you bring with you?

JJ: First, we’re going to have a life supply of water. We’re going to stay alive. For me, personally, I would probably have my wife and kids, if that’s possible. And third, just get some type of way that I can eat every day without being worried about it. Like a grill or something where I could grab some fish and grill it or grab whatever else is out there and just cook it. I’m not going to go with the raw food! I’m not too barbaric for that!

KC: What would you be doing if you weren’t a football player?

JJ: Honestly, I would probably try and be a basketball palyer but if I had to go away from sports entirely, I would probably be in the field of doing something with the community as far as having a lot of non profits. (I’d) be more of a philanthropist around the community and hold a lot of camps for the kids because that’s what I’m mostly interested in, giving back to the community. When I was growing up, a lot of players like Keyshawn Johnson (look this up), came back and gave us hope. So that’s something that I will want to do full time.

KC: What is your favourite football memory?

JJ: My favourite memory is in college. We were playing our rivals and we were at home. I ran a couple runs and at that time, I had a really, really good stiff arm. I used to just lay it on people. While we were playing this game, I laid a couple still arms out there and then the fans just started saying, ‘MR. STIFFY! MR. STIFFY’ and that pretty much took on a whole nother level. People started calling me the sledge hammer. Hearing 59,000 fans call out your nickname or what they think of you, that was really, really awesome.

KC: What is the most embarrassing song you have on your iPhone?

JJ: Despacito (Editors note: Jeremiah did not say this word.. he sang it. Amazing). I love that song! That’s my song!

KC: Do you know all of the words to it?

KC: Have you seen the video of Justin singing Doritos and burritos instead of the Spanish words?

JJ: (Laughs) Wow! I didn’t see that but I was watching Ellen Degeneres and she put on the song and got the mic and passed it along to her audience and they were screwing all the words up! That was funny and I’m not the only one!

KC: What are you binge watching on Netflix right now?

JJ: How to Get Away with Murder. I’m binge watching that all day.

KC: If you could have any super power, what would it be?