No Guarantees: Dylan Wynn fueled by those he has lost

No Guarantees: Dylan Wynn fueled by those he has lost 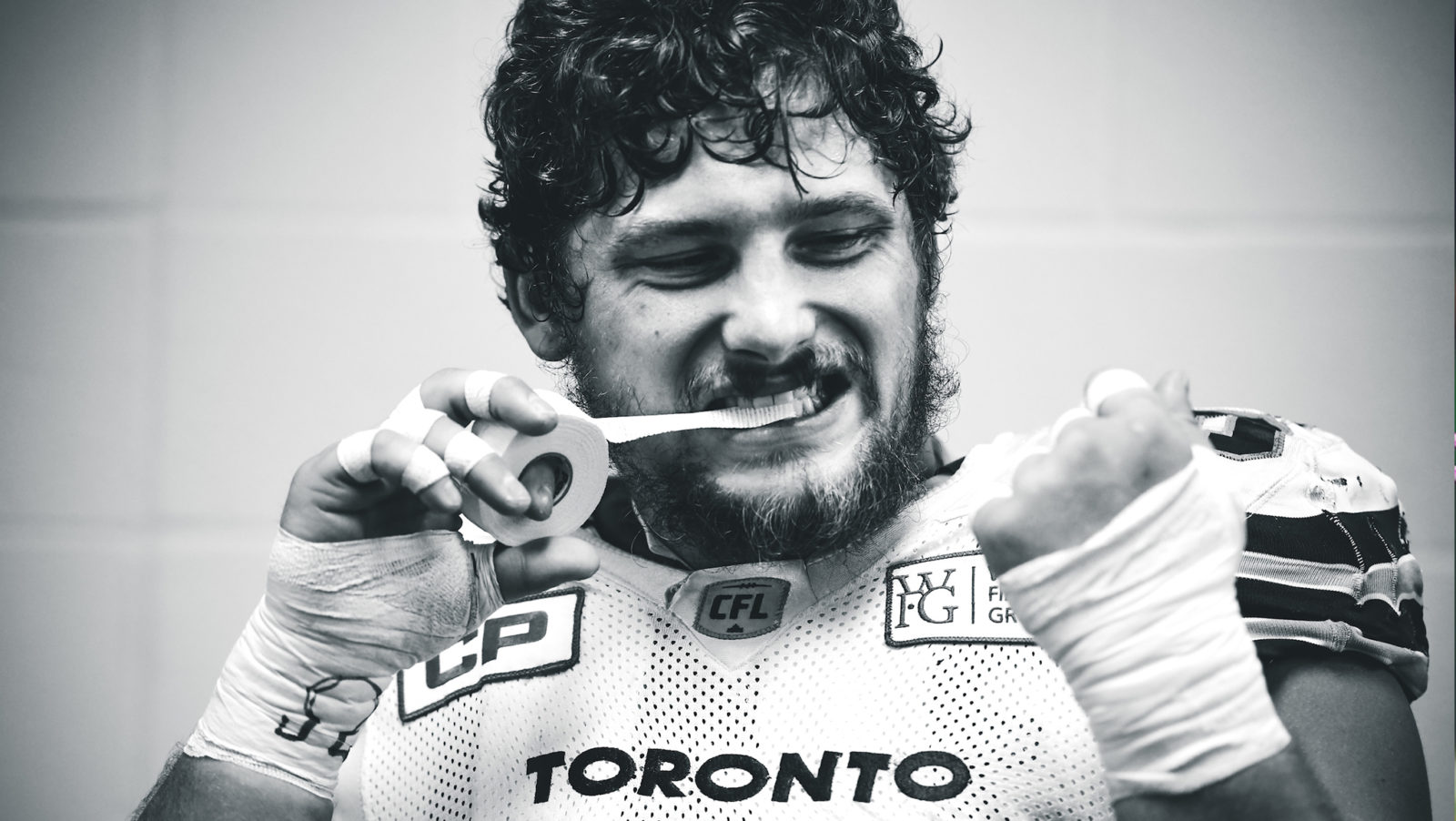 here’s a lot to know about Dylan Wynn, the impressive rookie defensive tackle for the Toronto Argonauts.

He’s got a ukulele named Lucy, which he plays the night before a game, appreciating the instrument’s calming properties. “You can’t be mad and play a ukulele,” he says.

He stays in shape, in part, by herding calves, on foot, at a friend’s California ranch during the off-season because “you get good tackling drills, chasing little calves around.”

He was a pretty fine wrestler in high school. “I was lucky enough to actually beat the two-seed in state, my senior year,” he says.

And Dylan Wynn carries a thankful attitude through his football life, honouring the memories of teammates and friends who’ve passed on in untimely fashion – one of whom he saw collapse and die on a basketball court in front of him.

“There’s a lot of things you cannot control in this world,” says Wynn, the lively 24-year-old native of Concord, California. “But I’ve always found what I can control is my effort and my attitude.”

Wynn has an explosive interior line presence, an impressive football IQ and a passion for the game that has brought him almost immediate success in Canadian pro football.

He loves the game, in general, and is particularly enamoured with the way we play it up here, drinking in the quick pace of a 20-second clock and three downs in deep, thirsty gulps.

“I learned a lesson pretty young in my college career,” says Wynn, referring to the night that friend and teammate Fred Thompson died.

It was Wednesday, December 7th, 2011. Wynn and a few of his Oregon State football teammates were playing pick-up basketball at a recreation centre on campus.

One of them was Thompson, a freshman lineman who was to turn 20-years-old the following Sunday.

Sadly, he would not make it to that milestone birthday.

“He was playing basketball and just dropped,” remembers Wynn. “His heart was too big and just beat wrong and… he was gone. Just like that.”

Thompson was described by some as a big teddy bear. Wynn remembers him as a “lively, guy. Always had a smile on his face.”

Seeing a young life taken so suddenly had an effect on Wynn, and he emerged from the experience with an attitude that accompanies him now, one of gratitude and acceptance. 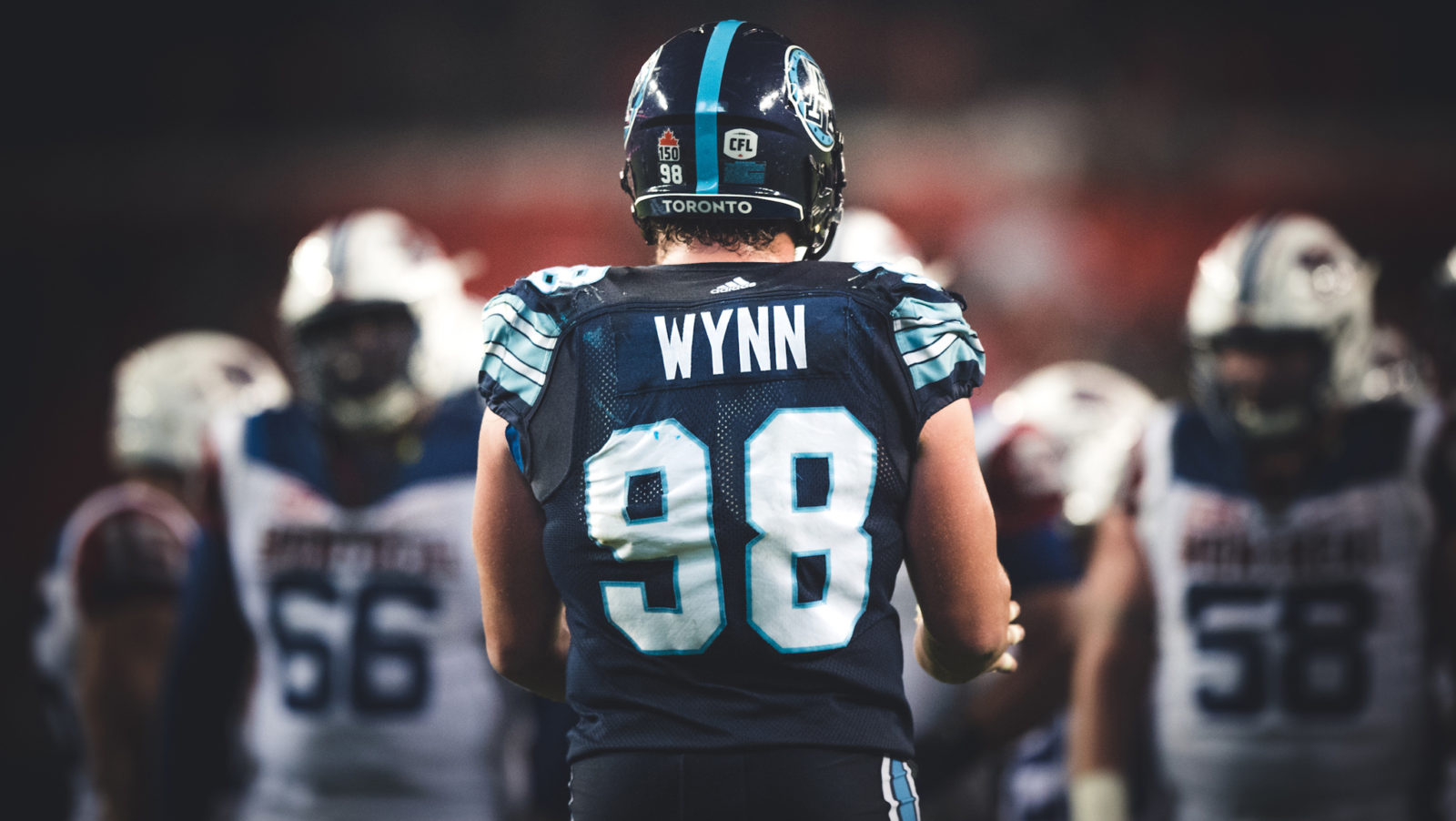 “I’ve got a few teammates that I played with over the years that have passed away and I think about ‘em before every game.”

“After (witnessing) that, you can’t expect anything because you don’t know,” he says, philosophically. “You don’t know what’ll happen. So, I’ve kinda lived my life where it’s like ‘hey, if this is the way that things are gonna go, then make the best of the situation.’ Everyday above ground I’m just happy.”

Instead, Wynn says he accepts the fragile nature of existence and uses the memory of Thompson as well as two De La Salle High School (Concord, California) football chums who passed away much too early, Michael Parros and Chris Jarvis, to inform his grateful outlook.

“I’ve got a few teammates that I played with over the years that have passed away and I think about ‘em before every game,” he says.

“I think about ‘em every day.”

If Wynn is, as Argos’ Defensive Coordinator Corey Chamblin says, a “very unique player” and one who is “super smart” with a “no quit mentality,” that is at least partly by design because Wynn chooses to walk his path appreciatively and industriously, taking stock most every step of the way.

“That’s kinda what I think has gotten me here and what’s gotten me into the professional level,” says Wynn. “I’m not a physical specimen in height or strength or speed. But I control what I can control and I try not to worry about what I can’t.” 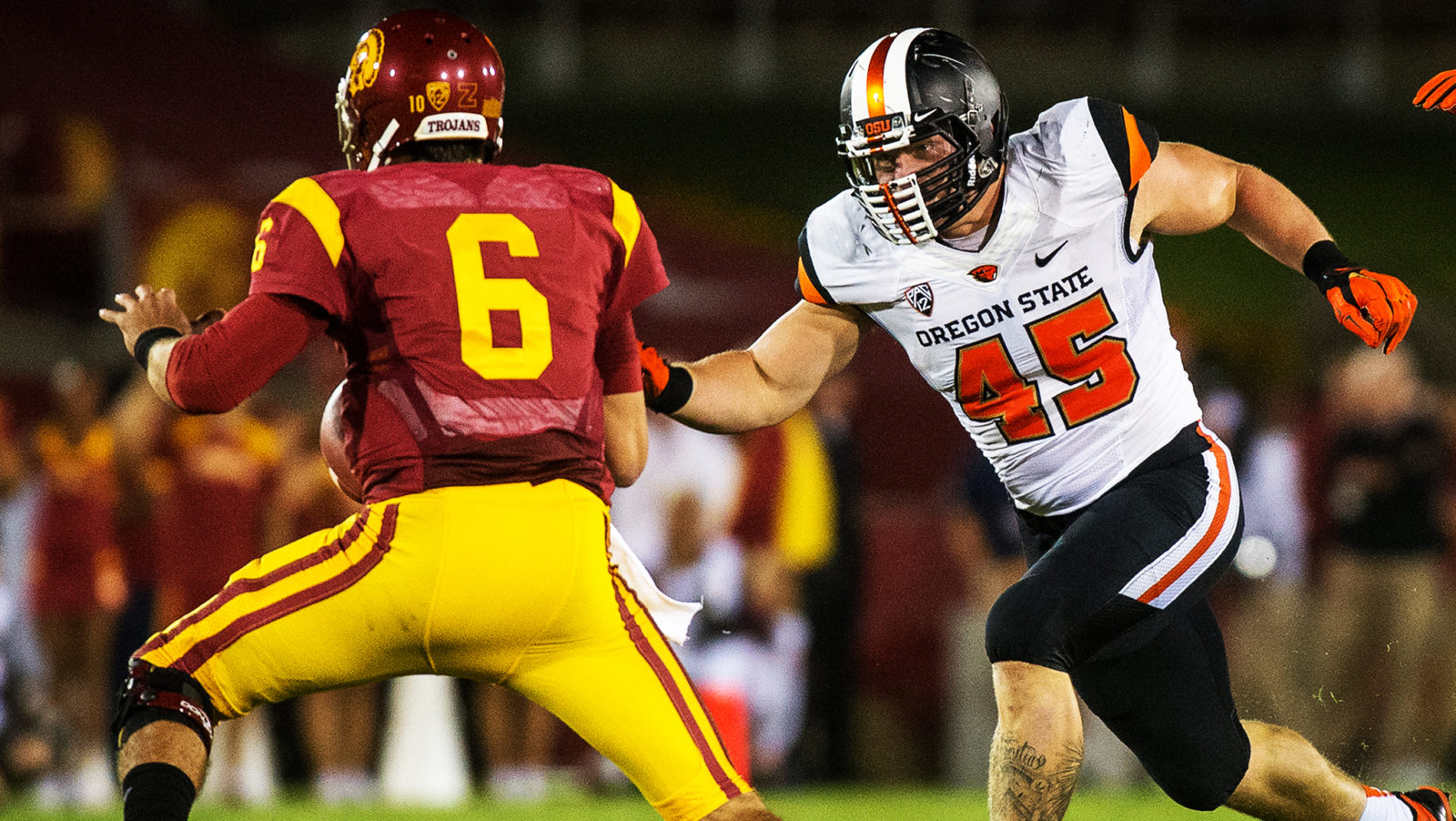 With 30 tackles and 6 sacks in twelve games so far, Wynn takes his place as one of the more accomplished defensive trench warriors of the 2017 season, trailing only Hamilton’s Davon Coleman and Calgary’s Micah Johnson in tackles by interior linemen. Only Johnson has more sacks, among defensive tackles.

“He’s excited about the game,” says Chamblin, who continued to rave about Wynn even after our interview was completed. “He loves the game.

You’ll see him in a meeting and this guy’s shaking his legs, biting his finger nails.”

“It’s game time all the time with Dylan Wynn.”

On that point, there’s a simple explanation, says Wynn.

“I love my job,” he gushes, admitting that he occasionally finds it hard to contain his joy. “It’s funny because sometimes in practice I’ll just yell it. I love my job.”

All the while, Wynn keeps a sobering thought in the back of his mind.

Well, to him it might not be a sobering thought as much as it is a touchstone, ensuring that he continues to enjoy each moment.

“God forbid,” he says, “but my last day of football could’ve been today. And that’s how everything is.”

Wynn knows this because he carries with him the memories of a tragic evening, nearly six years ago.

Wynn didn’t start the year at the top of the depth chart. The 6′ 3”, 240 pounder – who spent parts of two seasons on the roster of the NFL’s Cleveland Browns –  was signed by Toronto in the spring, brought in to provide rotation depth and injury insurance. The Argos had to cash the policy early in the season, when D-line injuries mounted rather quickly. 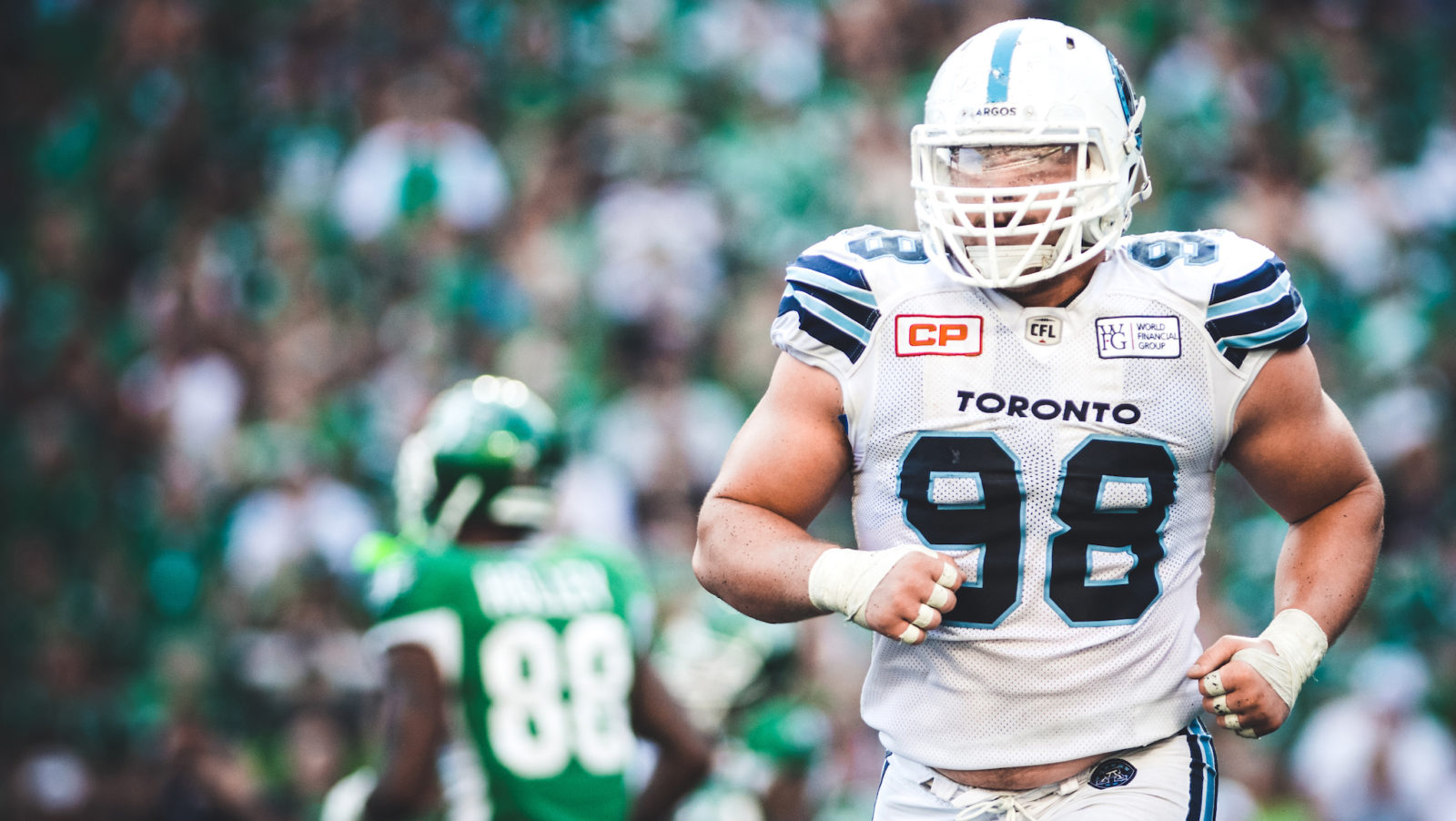 “I’m beyond blessed that the Argonauts gave me the opportunity to showcase my skills and be part of an amazing team and a great group of guys. This is one of my favourite D-lines I’ve ever played on, for sure.”

By Week 4, Wynn was in and he has blossomed. “His production’s been up there and it’s pretty hard to take him off the field,” says Chamblin.

Wynn’s insertion into the Argos’ line-up may have looked somewhat seamless to the casual eye but that was not the case, he says, as he needed time to adjust to certain nuances of the Canadian game. It may surprise you to know that it wasn’t the usual thing that linemen have to get used to that gave him some trouble; lining up a yard off the ball after playing nose to nose for his entire life. Instead, it was the something away from the line of scrimmage.

“The waggle was a little weird,” Wynn says, noting that receivers in motion distracted him at first. “Trying to calm your eyes down” was a challenge.

His mother, Karen, noticed. “My mom was like ‘man, you look like you’re playing like a freshman out there, you’re not comfortable yet,’” Wynn says. “She is a fiery woman,” he adds, laughing.

Wynn started off with a total of four tackles in his first three games in the CFL before exploding for eleven tackles and three sacks in his next two. He hasn’t looked back.

“It took him a week or two to get into the groove of it,” says Chamblin.

“But once he got into the groove of it… he’s been goin’.”

It’s more than just his constantly running motor, Chamblin insists, that has set Wynn apart. The coach recounts a day at practice where he saw something that looked wrong in the scheming. Wynn noticed it too, coming off the field immediately to offer his input on what was wrong. “I was like ‘you’re right,'” says Chamblin. “We always joke that he’s the assistant D line coach. Because that kid is on it.” 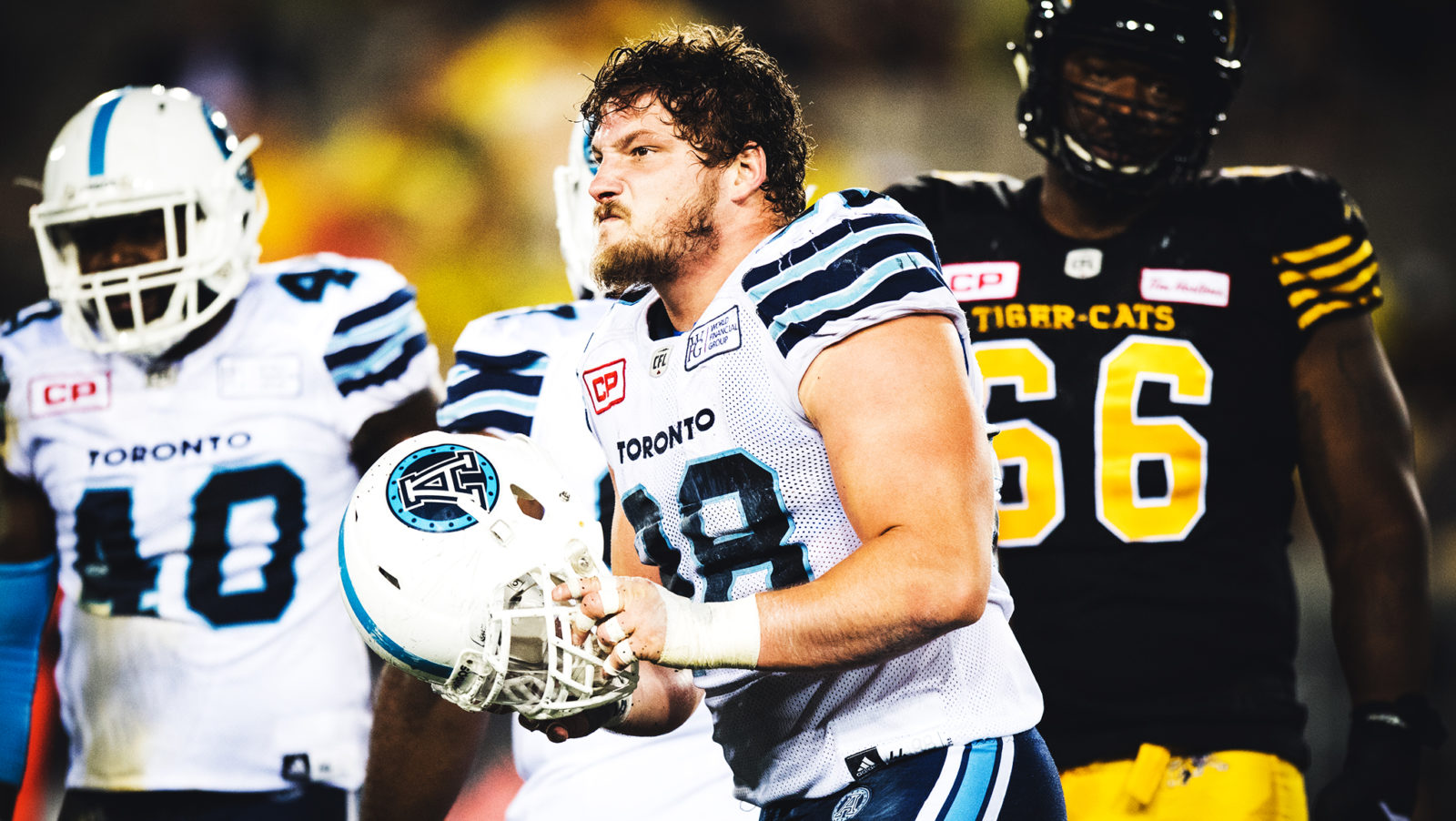 While his own hard work and love of the game have been important reasons why his stock has risen so high, so fast, Wynn is quick to praise the Argonauts’ organization from top down, as well as his teammates, for being keys to his success.

“I’m beyond blessed that the Argonauts gave me the opportunity to showcase my skills and be part of an amazing team and a great group of guys,” he says. “This is one of my favourite D-lines I’ve ever played on, for sure.”

“We’re lively in meetings and definitely our scheme is awesome. Our whole defence works as a unit and we get a lot done,” says Wynn of a group that leads the CFL in sacks as well as denying second down conversions, and stands second to only Calgary in average yards given up per game. A defence that began the year as a relatively easy one to run against has risen to become the third-stingiest in the league, behind the Stampeders and BC Lions. That despite the ruthless injury bug that has continually savaged the Argos’ defensive corps in 2017.

That’s a reality that has kept everyone on the roster mentally sharp, says Wynn.

“Everyone knows that you can be up at any second,” he says. “This is professional football, it’s a long season. That’s how things go. And so everyone is just biting at the bit for their chance. Everyone’s ready so that when they get in, the play doesn’t dip. It almost gets better.”

It’s enough to make a guy feel grateful, especially one like Wynn who is prone to that perspective in the first place.

“Right now I’m on an amazing team and I’m definitely lucky for what I have,” he says.