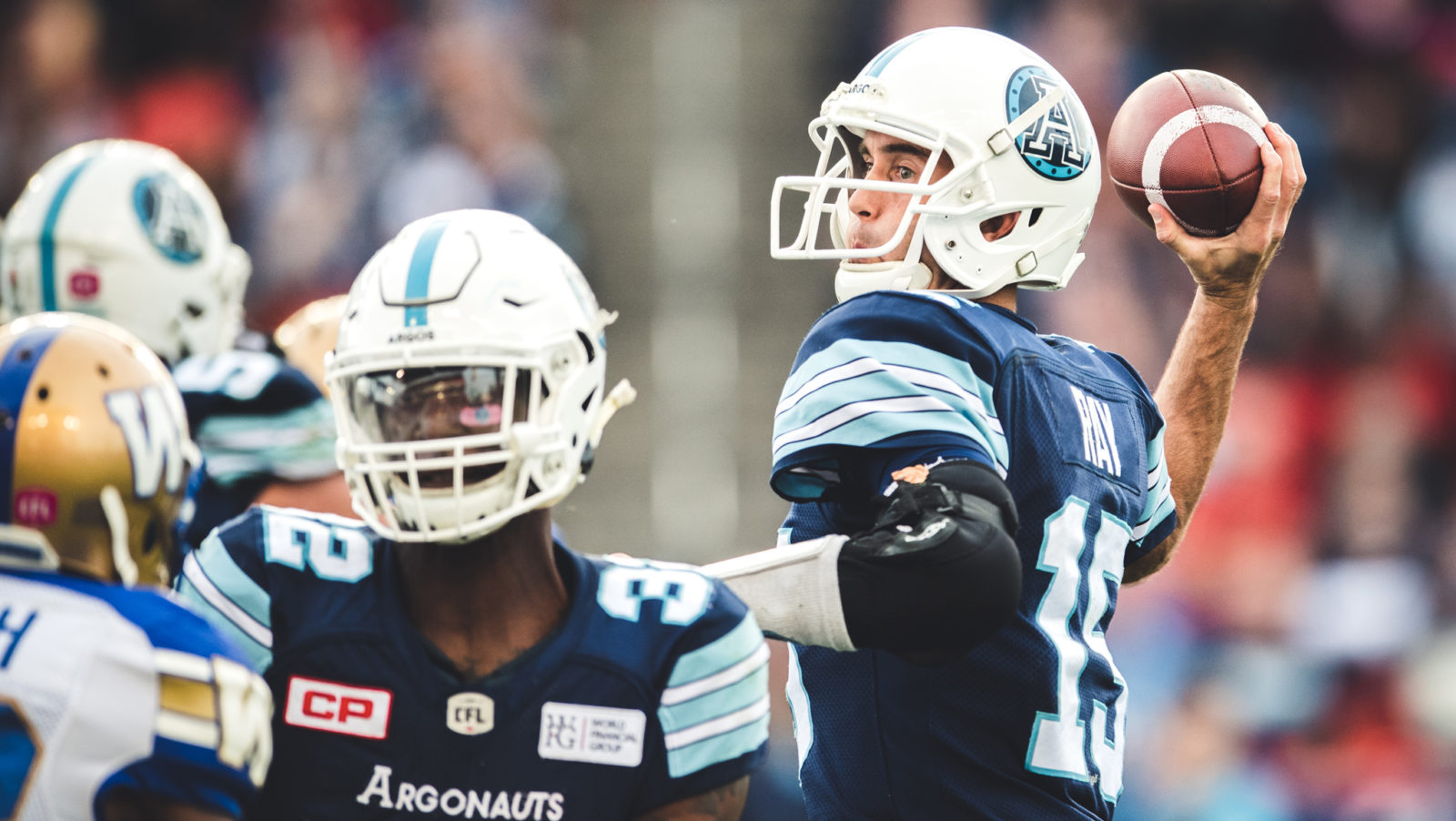 TORONTO — Thanks to a late surge in the fourth quarter, the Toronto Argonauts defeated the Winnipeg Blue Bombers 29-28.

With the win, the Toronto Argonauts have moved into first place in the East Division and can clinch their first Eastern Final date since 2013 with an Ottawa loss next week or a win the following week in BC.

In the contest, Ray was good on 32 of 43 passes for 423 yards one touchdown and one interception.

James Wilder Jr. scored two touchdowns in his return since missing last week against the Edmonton Eskimos. To go along with the two majors, Wilder Jr. rushed for 112 yards on 18 carries and also caught 85 yards on seven catches.

Winnipeg’s Weston Dressler led all receivers in the game with 129 receiving yards on eight catches and scored a touchdown in his return to the field. DeVier Posey caught 128 yards on five catches in his team’s victory.

To open Saturday afternoon’s contest, Wilder Jr. scored in his first game back since missing last week against the Eskimos. The running back’s third rushing touchdown of the season was a 12-yard score where he fought off a tackle to make sure he crossed the goal line.

Ray moved his team 86 yards down the field in 10 plays, aided by a 13-yard Cody Fajardo quarterback sneak, to set up the score and after Lirim Hajrullahu’s convert, the Argonauts took an early 7-0 lead.

On the Bombers opening possession, Matt Nichols looked to Dressler – who made his return to the field after missing three games with an injury – to help move the chains. He first tossed 15-yard pass to the veteran before finding him for a 10-yard gain, getting Dressler into the offence early.

Back-to-back penalties against Toronto – both illegal contact penalties including one that voided a Mitchell White interception – moved the Bombers into scoring position on the Argos 10-yard line.

Another penalty against the Argos, this time it was Jermaine Gabriel called for roughing the passer, moved the Bombers to the one-yard line and Dan LeFevour ran around the edge untouched to score the Bombers opening major.

After Medlock’s completed convert, the score was tied 7-7.

Ray found DeVier Posey for a 55-yard gain on the first throw of the team’s very next possession. Wilder Jr. then ran 14 yards to bring Toronto to the Bombers six-yard line.

After two incomplete passes, both to S.J. Green, Marc Trestman decided to get his team to go for it on third down. The gamble paid off for the home team as Ray threw to Declan Cross who ran into the end zone untouched. With the point after, the Argos took a 14-7 lead.

The Argonauts defence held strong when the Bombers offence hit the field again, holding Winnipeg to a two-and-out.

Once again, the Argos decided to go for it on third down but Jovan Santos-Knox sacked Ray forcing him to fumble. Trent Corney recovered the fumble for the Bombers bringing Nichols and co. back to the field.

The Bombers couldn’t take advantage of the turnover, however, and Medlock had to punt the ball away.

It took the Bombers just two plays from scrimmage to score their next major. Nichols tossed two passes to Dressler on the drive – first a 43-yard gain followed by the 28-yard touchdown score. With Medlock’s convert, Winnipeg tied the game 14-14 with just over seven minutes left in the first half.

Medlock’s 39-yard field goal sailed wide and was taken out of the end zone by Martese Jackson who appeared to get injured on the play but did return later in the contest.

Hajrullahu missed his 44-yard field goal attempt and Kevin Fogg returned it 79 yards but a holding penalty against Santos-Knox called it back to their own five-yard line. The teams took a 14-14 tie into the half.

The Bombers took their first lead of the contest (17-14) after Medlock booted a 52-yard field goal to start the second half.

On Toronto’s first drive of the second half, the team went for it once again on third down. Ray tossed to Posey for a 13-yard gain on third and two for a first down. Just when things looked to be going in Toronto’s favour on the drive, Tristian Okpalaugo intercepted Ray’s pass in Bomber territory – defensive lineman’s first pick of the season – and took it all the way down the field 98 yards where Wilder Jr. tackled him at the one-yard line.

LeFevour scored his second touchdown of the evening on the quarterback sneak, extending the Bombers’ lead to 24-14.

Wilder Jr. scored his second major of the ball game on the Argonauts next possession. Toronto moved down the field 75 yards to set up for the running back’s three-yard score.

Malcolm Williams missed the pass from the Argos pivot deep in the end zone and the Bombers held a 25-20 lead with two minutes left in the third quarter.

Winnipeg added another field goal to their lead to start the fourth quarter after Medlock booted a 32-yarder. That score extended the Bombers’ lead to 28-20 two minutes into the final frame.

Hajrullahu added another field goal – this one from 15-yards out – to the Argos score, cutting Winnipeg’s lead to 28-23.

With the clock ticking down and nearing the three-minute warning, the Argos weren’t going down with out a fight. Ray rolled out of the pocket and tossed a 40-yard pass to Ralph bring the team into Winnipeg territory.

After two gains from Cross and Wilder, and a face mask penalty against Alexander, Fajardo’s first attempt at a quarterback sneak from the one-yard line was stuffed by the Winnipeg defence. He plunged in on his second attempt, giving the Argonauts back the lead. The Bombers defence held Fajardo out of the end zone for his two-point convert attempt and Toronto held a single point lead with just under two minutes left in the game (29-28).

The Bombers moved down the field and were in promising position to score. Medlock missed his 40-yard field goal attempt – a rarity for the Bombers kicker – and Hajrullahu booted the miss out of the end zone as time expired.

The Blue Bombers head home to host the BC Lions next week while the Argonauts head out on a Week 19 bye.