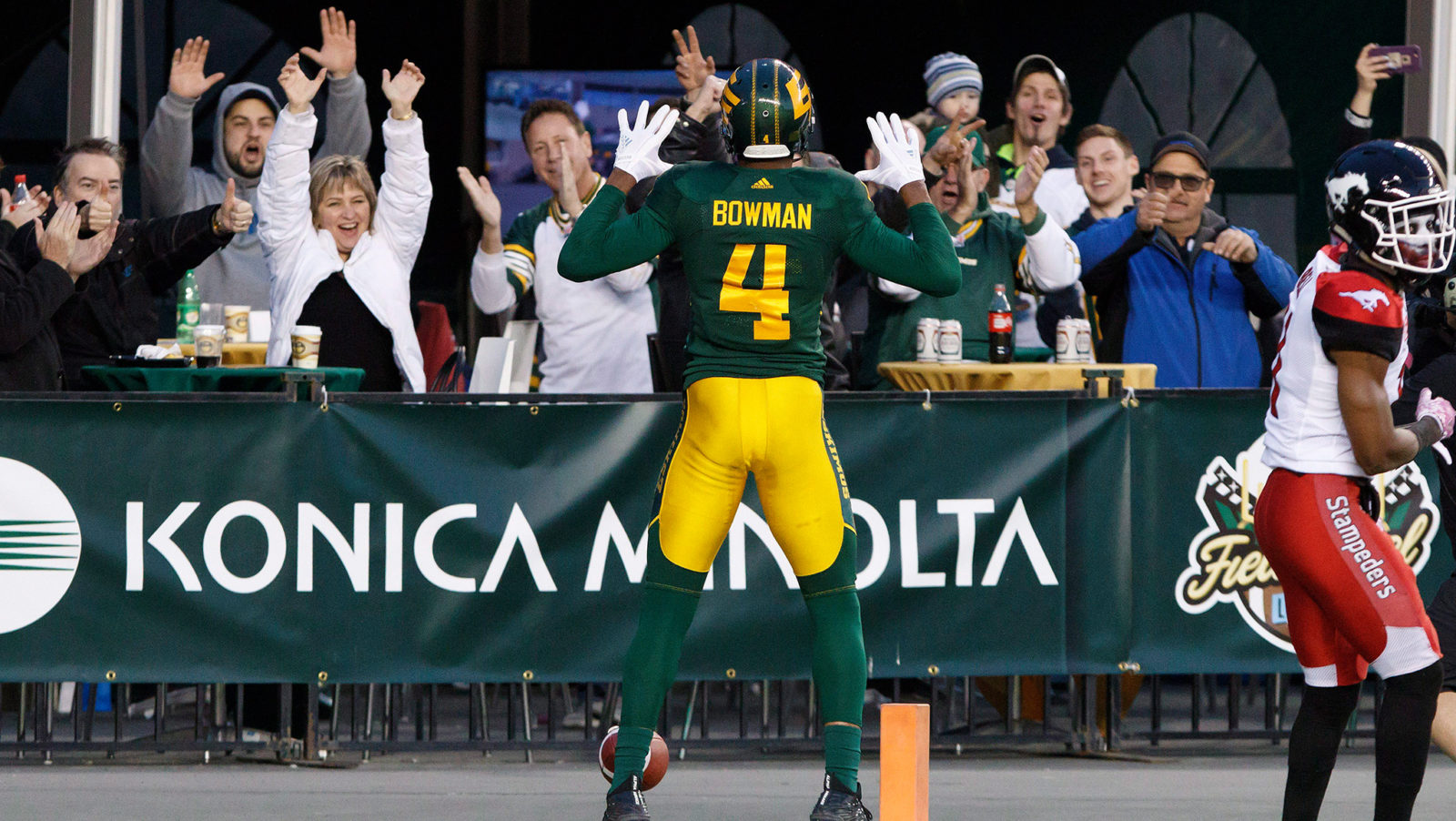 EDMONTON — A two-touchdown performance from receiver Adarius Bowman led the way for the hometown Edmonton Eskimos as they downed the Calgary Stampeders via 29-20 decision at Commonwealth Stadium in Week-19 action.

It was a milestone kind of night for the Eskimos (11-6); Bowman put up his first multi-touchdown game of 2017, while pivot Mike Reilly’s 284-passing-yard performance helped him eclipse the 5,500-yard mark for the second-straight season.

Reilly was stellar, completing 18 of 27 pass attempts for a trio of touchdowns, and spread the ball well with six different Eskimos catching a pass in Saturday’s win.

The loss was the second in a row for the visiting Stampeders (13-3-1), whose streak of 103 games without back-to-back defeats — the longest active mark in the league by some distance — was snapped.

The Esks’ win further tightened the West Division playoff picture and sets up a wild Week-20 finale; entering the final week of the 2017 regular season, Edmonton sits level with Winnipeg on 11-6, and Saskatchewan is nipping at their heels on 10-7. A home playoff game, said game’s opponent and a roadtrip east to play the crossover game are still to-be-determined amongst the three.

Both teams struggled to find any flow in the opening quarter, as the Esks and Calgary combined for just 89 total yards of offence.

The Stamps would eventually open the scoring midway through the second quarter, when — after a key defensive stop and a big completion to Kamar Jorden — kicker Rene Paredes booted a 17-yard chip shot of a field goal.

Calgary’s lead, however, was short-lived as Reilly and the Eskimo offence roared to life on the ensuing possession; following a 45-yard bomb of a completion to Derel Walker, Reilly found Bowman wide open in the end zone for the night’s first major. Following a Swayze Waters convert, the hosts led 7-3.

A 44-yard field goal from Paredes cut the Stamps’ deficit to a single point, but a miscue late in the half by Calgary return man Tunde Adeleke gifted the Esks a punt single and sent the teams into the half with the hosts in front 8-6.

Reilly and co. opened up a two-score lead in spectacular fashion inside the opening minute of the second half, as the Edmonton quarterback tossed a 77-yard touchdown bomb to Brandon Zylstra; following the Waters convert and a Hugh O’Neill kick-off single, the Esks led 16-6.

The Stamps responded with their best drive of the night to that point, as Mitchell led them on an eight-play, 70-yard drive that culminated in the end zone on a 10-yard connection with Anthony Parker. The subsequent Paredes convert brought Calgary within a field goal.

Jamill Smith promptly regained momentum for the Esks with a weaving 64-yard return that set up a 17-yard touchdown connection between Reilly and Bowman (again); the subsequent Waters convert restored Edmonton’s 10-point lead.

The hosts opened up a 13-point lead — the largest of the night — on a 15-yard field goal from Waters and it all looked set and done.

Mitchell and co. had other ideas, however, and the Stamps quarterback made things interesting with a 13-yard dart of a touchdown pass to Kamar Jorden. The ensuing Paredes convert cut the deficit to six, but Rob Maver’s onside kick attempt was recovered by the Eskimos.

Waters tacked on a 38-yard field goal on the final play of the game to seal the victory with a bow.

The Stampeders will return home to McMahon Stadium for a regular-season finale against the Winnipeg Blue Bombers on Friday Night Football (Nov. 3, 9:30 p.m. ET), while Edmonton will head to the prairies for a date with the Saskatchewan Roughriders in a Saturday-night showdown at Mosaic Stadium (Nov. 4, 7:00 p.m. ET).

Both contests will have serious playoff implications.