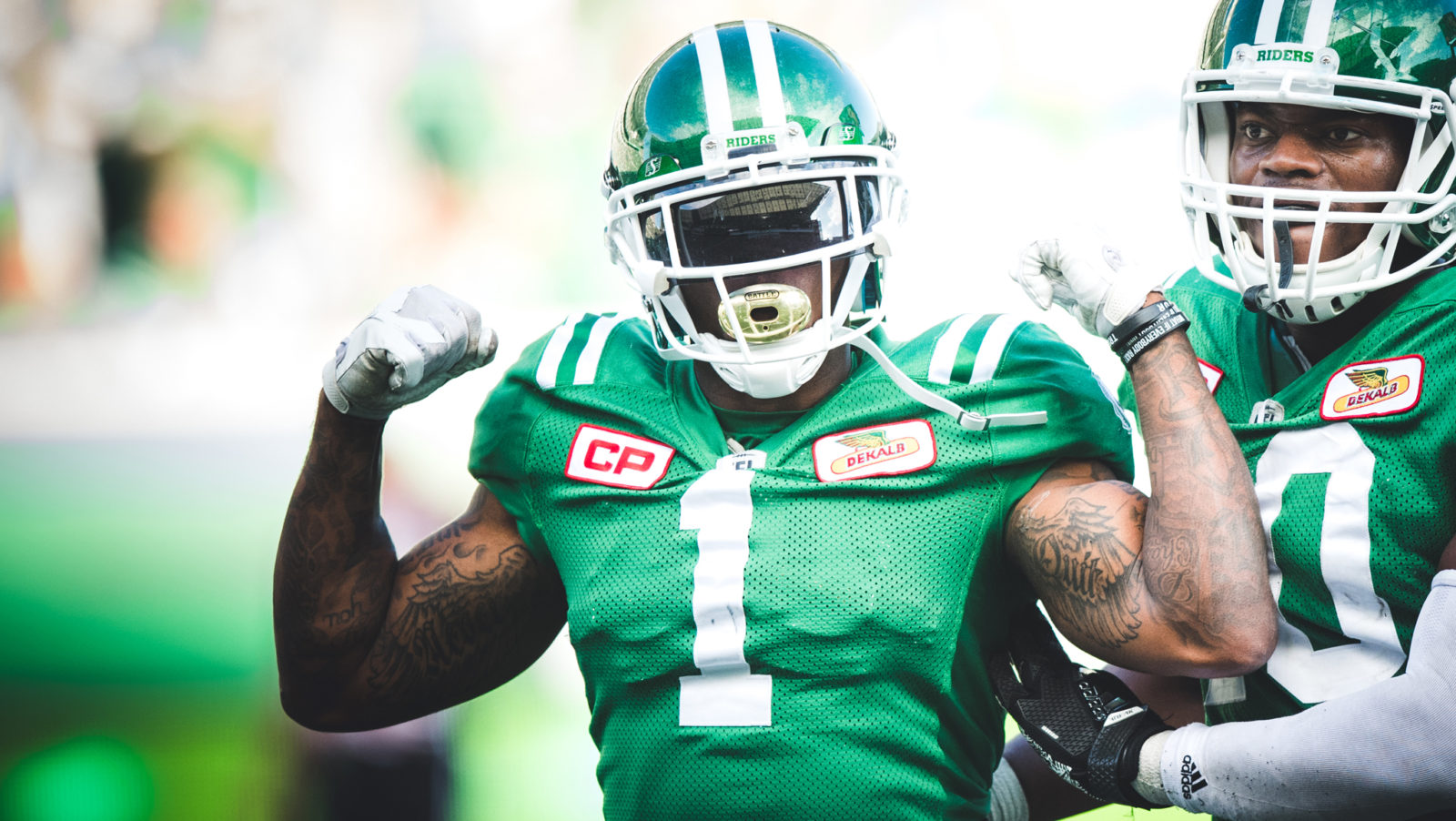 Ed Gainey got the defensive player nomination. Willie Jefferson got backing for that, too. Duron Carter got all kinds of press for crossing the line of scrimmage and scoring a pick-six.

The headlines may have gone elsewhere, at least outside of Regina, but here’s a bulletin for you: Saskatchewan corner Jovon Johnson has quietly been anchoring the rise of a defence in 2017, his veteran presence and still very sharp skill set helping the Roughriders emerge as, at times, a very good drive-stopping unit.

“My play will speak for itself,” said Johnson earlier this week. “If it gets me noticed it does. If it doesn’t, oh well.”

The 33-year-old should be noticed. He’s tied with Hamilton rookie Richard Leonard for the league lead in knockdowns (12) and has two interceptions to his credit, although he believes he ought to have many more. “At least five of those should have been intercepted,” he said of his knockdown total, a little disappointment creeping into his voice.

RELATED
» Stats: Jovon Johnson by the numbers
» Morris: Flyin’ Hawaiian picking up where he left off
» Buy Tickets: Edmonton at Saskatchewan 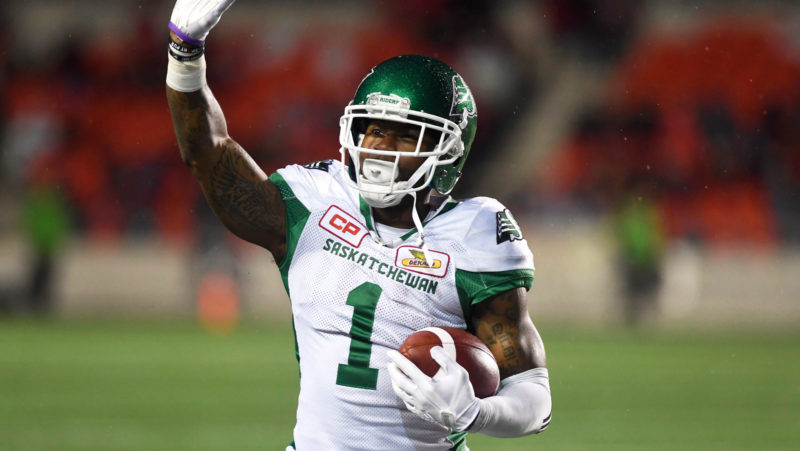 With a forced fumble and two recoveries on his stats line, Johnson has been solid as can be at the strong side corner.

But there’s more to it than that.

“I think he has a lot of veteran leadership that he can share on the field,” said John Murphy, the Riders’ assistant vice-president of football operations and player personnel, before going on to praise Johnson’s character.

Character was a big reason why Murphy and Head coach Chris Jones decided to sign Johnson last spring, just after he’d been released by the Montreal Alouettes during the late stages of training camp. With a number of first-year players on the backfield roster, the Riders were looking for solid play, yes, but as importantly, leadership. Johnson was a gift from the heavens, dropped down at a time when the Roughriders had been hit with some training camp injuries.

The fit was good for Johnson, too. He’d been soured by the way things went in Montreal and wanted to be in a place where he felt he could trust the coaches and management.

“I knew that John Murphy wouldn’t shoot me no BS,” said Johnson of his decision to sign in Saskatchewan. “He would keep me straight and tell me exactly what it was that they were lookin’ for out of me.

“They told me that they needed a veteran guy to come in and help out with the young guys that they had in the secondary, so I knew what my role was gonna be going in.”

Murphy and Johnson worked together in Winnipeg back in 2009, when the former served as the Bombers’ director of player development and the latter was establishing himself as an All-Star, still ramping up to his historic win as the CFL’s Defensive Player of the Year, becoming the first defensive back to win that award, in 2011.

Johnson has been happy to oblige. “I’m just happy to be on a team where my skills and my leadership is appreciated,” he said, contentedly.

“I knew coming in, being the more veteran guy in the secondary, that I would have to be a leader in that group,” said Johnson. “I did some things to try to change the culture of what we did as far as getting to know each other outside of football.”

“I believe that if you know a guy outside of the game that being his teammate on the field will be a lot easier for you.”

With that in mind, Johnson said, he started to marshal his backfield teammates together. For meals, for bowling, for a little pool. Things like that. It’s not a unique story in football circles but it still requires someone to pull things together and according to Johnson, he was that guy.

“The first week we did it, Ed Gainey had four interceptions in the game against BC,” said Johnson, brightly.

“Once we started to hang out more and get to know one another, it really started to impact the way we played together on the field and I think it showed a lot in these last ten weeks,” he said.

After his glorious days with the Blue Bombers, Johnson turned in good efforts in both Ottawa and then Montreal, even as there was no shortage of critics who believed his best days were gone. It doesn’t really seem that he’s lost a step, however, and if he has, he’s been able to make it up with the smarts that can bless a veteran in his eleventh campaign.

Arriving in time for the start of the regular season, with little prep time, Johnson started out strong in Riderville. “He jumped right in and helped us out Week 1 making a couple of big plays and being able to solidify a position in the secondary that late in the going,” said Murphy. 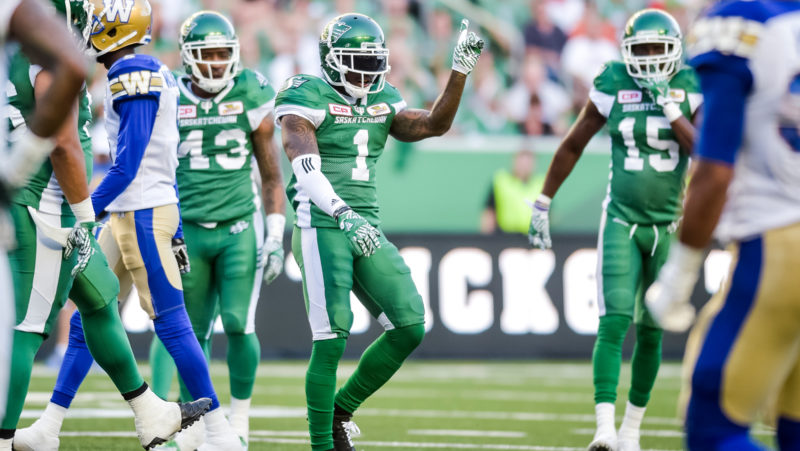 In his first season in Riderville, Johnson has helped anchor a defensive unit turnaround (Matt Smith/CFL.ca)

Murphy said the original plan was to have Johnson play corner for a few games and then perhaps use his knowledge and versatility to plug him into other positions as necessary. He was so good from the get go, however, that the Riders knew a good thing when they had it and left Johnson on the island, where he has started all seventeen regular season games.

“That’s where he’s really helped is just solidifying one position on the field,” said Murphy, before marvelling at Johnson’s durability. “You’re gonna get eighteen games of action from the guy.”

Johnson is slated to play in his eighteenth game of the season on Saturday, when the Roughriders play host to Edmonton in a monstrous tilt with big implications concerning playoff positioning and momentum. In his six seasons in Winnipeg, Johnson played eighteen regular season games five times, seventeen in the other. He played fifteen games in his first season in Ottawa, following that up with a full season with the REDBLACKS before playing another eighteen in Montreal last year.

His durability has been remarkable but it is not only that. “You’re going to get statistics in pretty much every category,” said Murphy.

For his part, Johnson believes the entire Saskatchewan pass defence will only get stronger, in part because of the growing comfort the players have with each other.

“We made a lot of mental mistakes early on in the season,” Johnson said, insisting that things will continue to tighten up.

“We believe in one another,” he said of his pass defence brethren. “We hold each other accountable and we play to a standard. And that standard has to be met every week.”

It’s a standard fostered by an integral presence, both on and off the field, one provided by a veteran who is still turning in stellar performances, even if those performances fly under the radar just a touch these days. 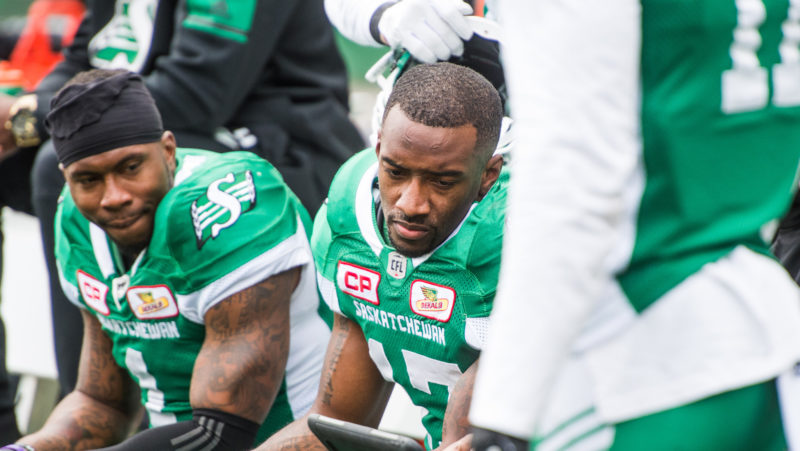 Butler (right) sits with Johnson (left) who have become a dangerous duo at strong side corner and strong side half (Matt Smith/CFL.ca)

While Johnson has locked down the strong side corner position, teammate Crezdon Butler has done the same at strong side half, making that area of the field a treacherous zone for opposing quarterbacks to target.

“We’ve built a relationship on and off the field as well,” said Johnson, who has seen Butler line up next to him every week since a game against BC on August 13th.

Butler’s vast pro experience – the 30-year-old spent seven seasons in the NFL – made it easy for Johnson to build a solid on-field partnership with him, quickly.

“He’s a veteran in his own right, just not in the CFL,” said Johnson.

“He knows the game. Things that you try to teach the younger guys, he already understands so it allows me and him to play well off each other.”

It’s a pairing that has helped solidify the Roughriders’ aerial defences in a big way.

“They’ve played as well together, on that side of the field, in the last ten or twelve weeks, as any two guys in the league.”