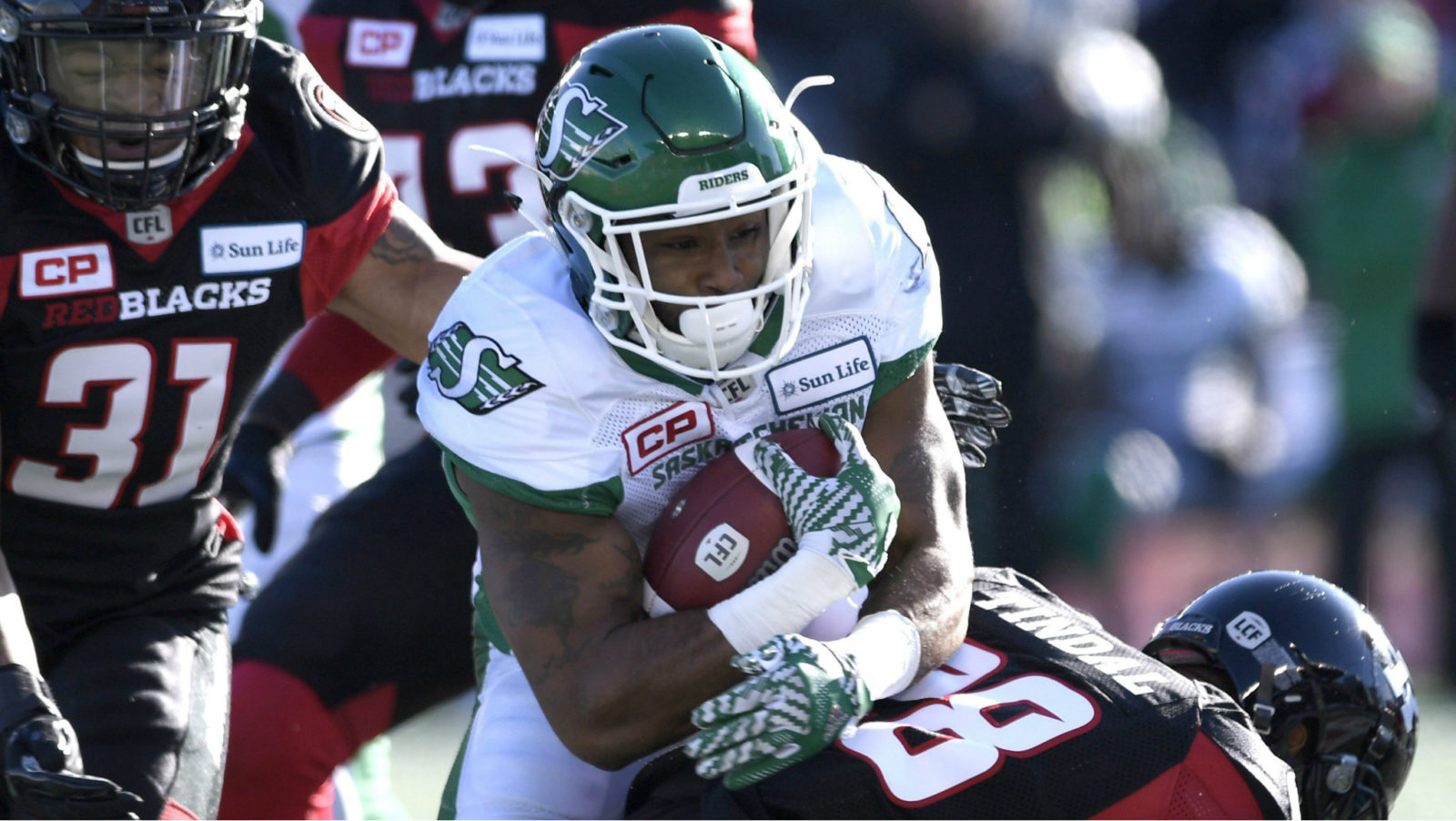 OTTAWA – The Saskatchewan Roughriders have punched their ticket to the Eastern Final thanks in part to a guy who wasn’t even playing football at the start of the season.

For a player who was sitting at home just months ago, Marcus Thigpen’s return to the CFL has ignited the Riders offence and kept the team’s rushing attack a threat with the absence of Cameron Marshall and Trent Richardson.

No more was that evident than in the Riders’ 31-20 victory over the Ottawa REDBLACKS in the Eastern Semi-Final to continue their journey to become the first crossover team to reach the Grey Cup.

Thigpen’s 75-yard touchdown at the start of the third quarter broke the game open for the visitors, silencing the crowd at TD Place that had seen an exciting seesaw battle in the first quarter.

“It was an inside zone play. I kind of just pressed the line to the left and seeing there was nothing there, I bounced back and the hole was right there,” said Thigpen. “I saw nothing but daylight, I knew I still got a little speed, I got a little juice in these legs left and just ran as fast as I could and got the score.”

The Riders won the momentum battle early after a back-and-forth opening frame, capping off an emotional day for Thigpen.

“I was at home missing the game. I wrote [Kevin Glenn] on Instagram and told him I want to play again so I give a huge thanks out to him,” said Thigpen. “The offensive line did great today. The coaches trusting in me and giving me the opportunity to be the stating back and I’m just very thankful for the opportunity.”

Thigpen said he felt like he still had a lot left in the tank when he was inspired to return to the game. He was still in game shape, running track with his high school coach and keeping his presence in the weight room.

He knew Glenn from their days together playing with the Hamilton Tiger-Cats. Thigpen saw a post about Glenn reaching 50,000 passing yards in his career and reached out to him, and the rest of the story has been told on the field.

“That always is a good thing when you’re coming to a new team after being out of football for some time,” said Glenn. “Having some familiar faces and knowing some guys so you don’t necessarily have to get adjusted. There’s guys in there who’ve already been with you.”

Thigpen’s 169 yards on the ground put him third on Saskatchewan’s franchise record list for most rushing yards in a playoff game behind George Reed’s 204 in 1967 and Kory Sheets’ 177 in 2013. He added 38 yards on a pair of kickoff returns.

“Being in the position that I’m in right now, to come back from being home for two years and being able to have the success I’m having right now is definitely a blessing,” said Thigpen.

The ride continues next week for the Riders when they visit BMO Field for the Eastern Final against the Toronto Argonauts.