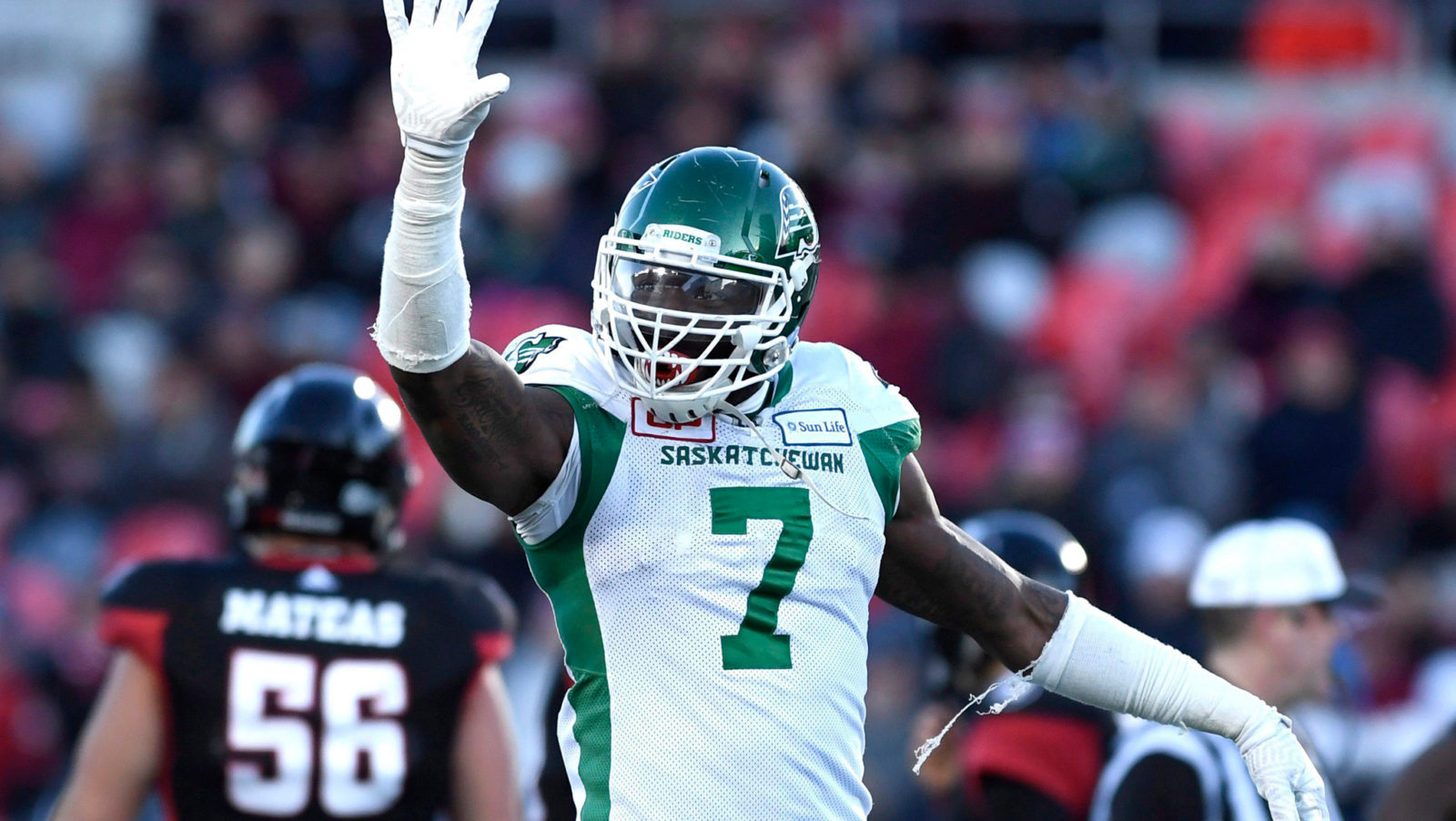 Hello, Cory Watson. Pick your spots, right? One defensive tackle credited. A doozy. Snuffing the run on a third down punt fake and handing Edmonton primo field position. You don’t need to dominate a conversation to leave an impression at a party. Just light up a room and leave.

1. COULD BE A TRACK MEET IN TORONTO

We already knew the Argos had rediscovered the run game, with East nominee for Rookie of the Year James Wilder Jr. powering his way through defences over the last few weeks. More recently, the Saskatchewan Roughriders have discovered their abilities in the art of barging, first with the power of Trent Richardson and now with the speed and agility of Marcus Thigpen.

Against Ottawa, Thigpen darted, dashed and flat out sped by the defence, on the way to a 169-yard day, including a 75-yard touchdown rip which showed him flashing pull away abilities reminiscent of Rocket Ismail. Get in my DeLorean and we’ll rev it up to 88 mph and still see Thigpen and Wilder race past us as I take you back in time to the middle of the summer, where you’ll be reminded that neither of these teams possessed what you’d call terrifying ground attacks. Now is now, however, and a couple of pretty decent air offences are augmented by the power to persuade at ground level.

2. SPEAKING OF BALANCE, MAY I INTRODUCE YOU TO C.J. GABLE?

When the Edmonton Eskimos grabbed C.J. Gable in a trade with Hamilton last month, the nostalgic ones wondered if he might be reborn, showing us the guy who burst onto the scene back in 2013 when he piled up almost 1,400 yards from scrimmage and was named Rookie of the Year in the East. Injuries cost Gable for a few seasons after that fine rookie campaign, underuse cost him most of this season. He was even a healthy scratch for a game earlier this year.

He’s looked pretty good in green and gold since that trade and the Western Semi-Final really showcased his everything. His 107 yards rushing included a ‘won’t be denied’ touchdown effort that must have impressed even noted pile-dragger Andrew Harris (shout out to the Edmonton O-liners who assisted with a big push from behind over the final few yards of that run). Gable caught four passes for 37 yards, too, and he stepped up into the right hole most every time to remind us of his well-deserved reputation as a premium pass blocker. Gable’s acquisition ranks as one of the great late-season pick ups in years. Years.

The Ottawa REDBLACKS rallied against Hamilton a couple of weeks ago, finishing the regular season with a rousing 41-36 victory despite being a minus five in turnovers for the night. I mused then that turnovers will kill you but not if you can’t be killed. It was a Hallowe’en kind of theme but perhaps I should have made it a Christmas one instead, one where the REDBLACKS were splurging dangerously on gifts, spending turnover money they didn’t really have in the bank and that the day would come when their “past due” notice came in the mail.

That day might have been Sunday, as three more turnovers were part of the poison that meant an end to Ottawa’s hope of a repeat. In a disappointing season where the defending champs found themselves on the wrong end of a whole slew of close games, it’s the recurring giveaway theme that seems most prominent. 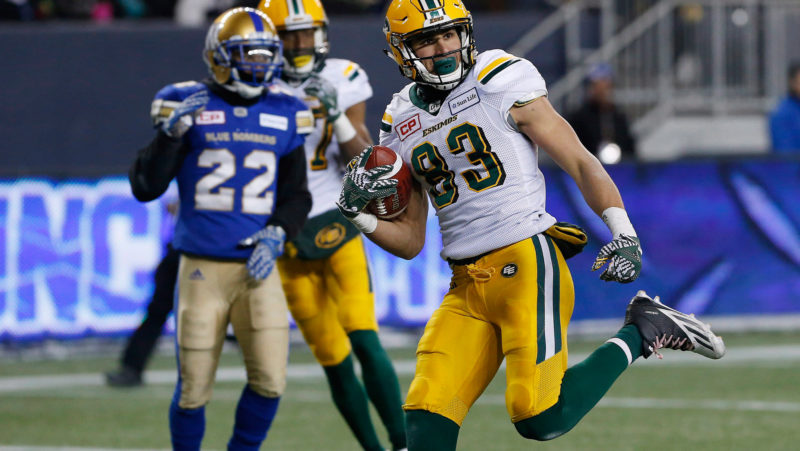 Yes. Cover those guys. Keep it up, too, even if each of them drop a pass or two along the way. (Sidenote: Brandon Zylstra DROPPED a pass? You shut your mouth.)

The Winnipeg Blue Bombers absolutely forgot to do that on a couple of plays and it cost them dearly, with Zylstra scoring on a 30-yard pass and run combo in the third quarter and Bowman settling behind blown coverage to haul in a 42-yard score in the fourth. A tight ball game got quite a bit more comfortable for Edmonton at that point and they had plenty to hold off a still-game Winnipeg offence after that.

I realize that reminding people that Brandon Zylstra and Adarius Bowman should always have a defence’s attention is a little like weather forecasters continually reminding us “not to overdo it” when shovelling snow or that we should “always try to stay hydrated” during a heat wave. Well, duh. Yet, there are always people who overdo it when shovelling their snow so here we are.

5. WILLIE JEFFERSON DOESN’T EVEN HAVE TO TRY 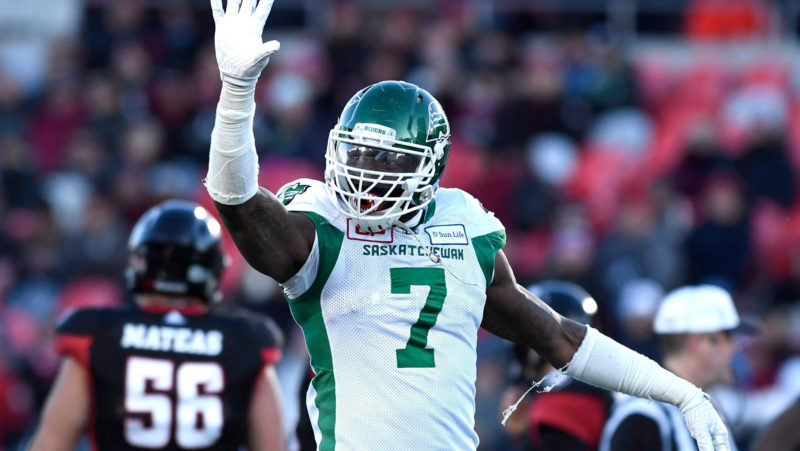 Well, he doesn’t sometimes. Or so it seems. The Saskatchewan playmaker gave a new meaning to the phrase “All-Star defensive end” when he made a key play without even knowing it during the early stages of the third quarter of the Eastern Semi-Final. With the REDBLACKS down 21-8, they’d recovered a Roughriders punt return fumble and after a five-yard pick up on first down, scrimmaged from the Sasky 14-yard-line. They had called the right play too, with quarterback Trevor Harris dropping back and then deftly flicking a shovel pass in the direction of running back William Powell.

One problem. Jefferson was trying to shake a block in the vicinity and as he did that, he backed right up into the line of fire and broke up the play with his backside. The REDBLACKS settled for a field goal and on the next play, Marcus Thigpen tore off his 75-yard touchdown dash.

Jefferson has a terminator-like tenacity and the smarts to be in the right place at so many right times, that even when he ain’t looking he can make the play.

A limbo themed touchdown celebration? Inventive. Publicity-grabbing. A challenge to top. Do CFL teams take requests? I’d like to see a re-enactment of one of Peter Griffin’s epic battles with the giant chicken from Family Guy. Thanks.